No, no, I said Troll Bridge - Warrior Heroes - Legends AAR

All minis from Splintered Light Miniatures

The female elf was relentless. As she and the Barbarian walked through the wilds all she would say was, "Is that the fastest you can go, Barbarian?" All he could do was shake his head and pick up the pace. Soon they reached the edge of the marsh woods and the river. 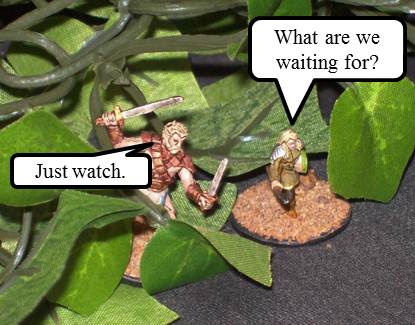 The two watched and listened. Soon their caution was rewarded. Two Mirholme warriors were making their way to the bridge that crossed the river. All Barbarian children had been warned about this bridge but the next crossing was three days down the river and the elf was in a hurry. This will slow her down the Barbarian thought. 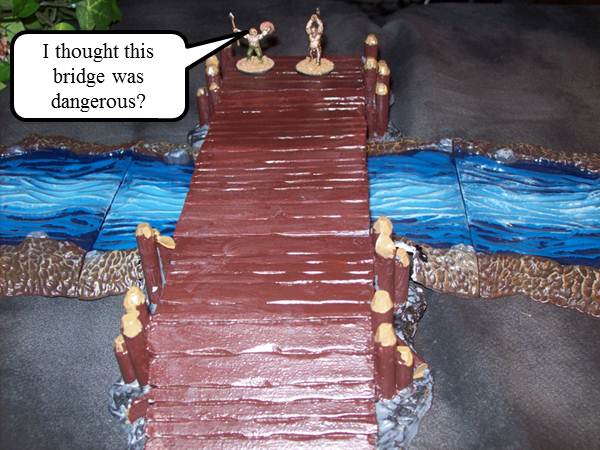 The two warriors decide to cross while the Barbarian can only wonder what would motivate them to do so. Maybe the stories aren't true after all? 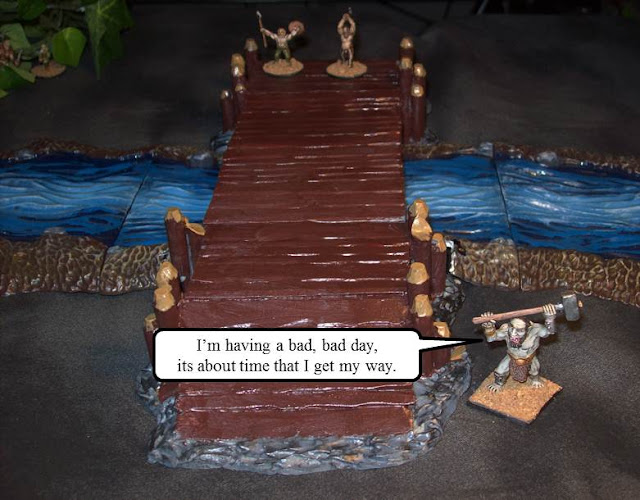 They heard the Troll before they saw him. 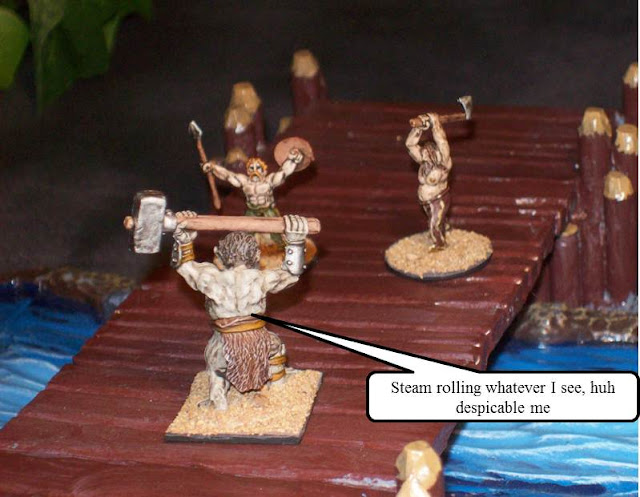 The Troll confronts the warriors... 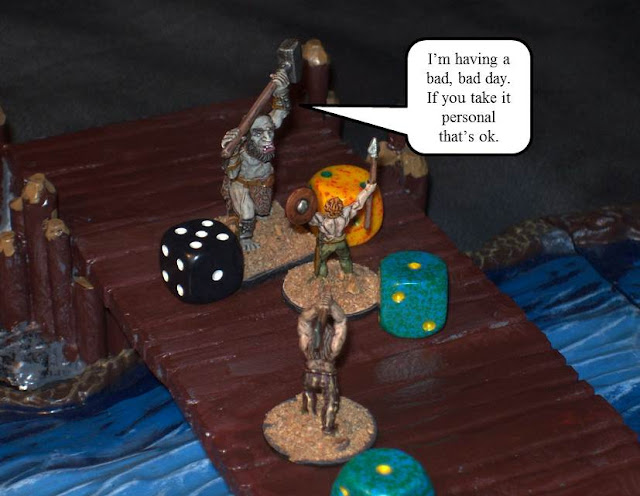 With battle cry honed by success the lead warrior charges the Troll intent on gaining fame beyond belief! 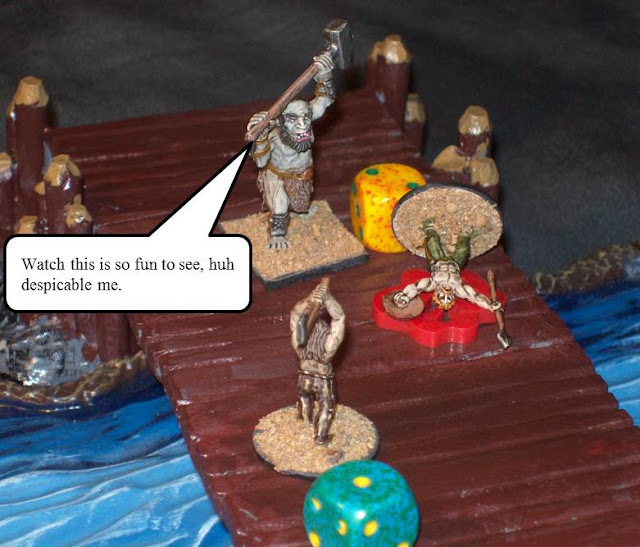 And dies a bloody, horrible death. 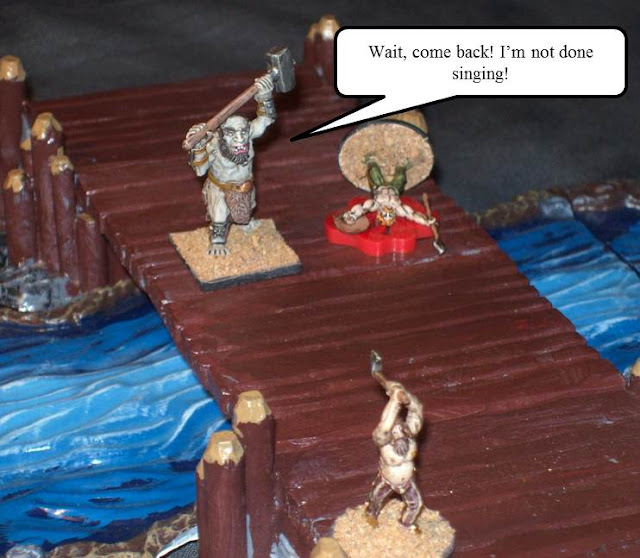 Screaming "The story is true!" the second warrior runs for his life. 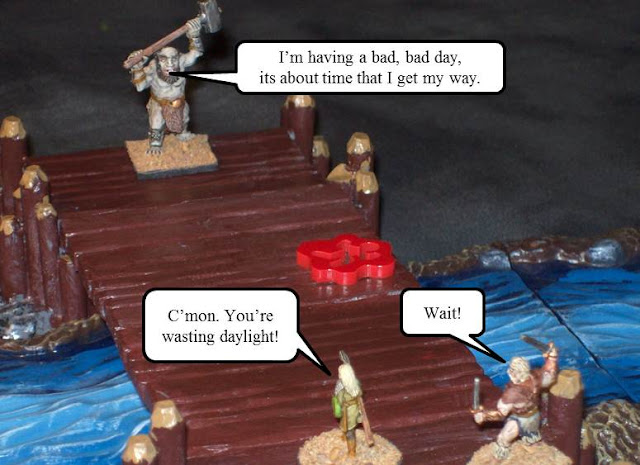 The elf won't be denied and charges forward. The Barbarian has no choice but to follow. 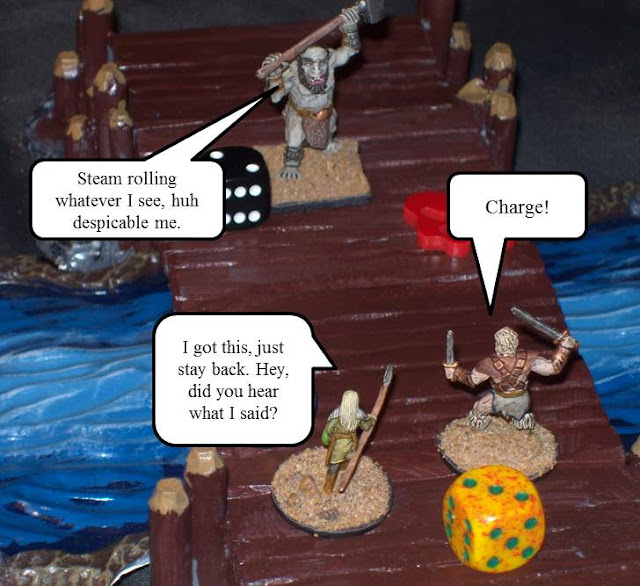 Succumbing to an age old battle lust the Barbarian charges into battle. 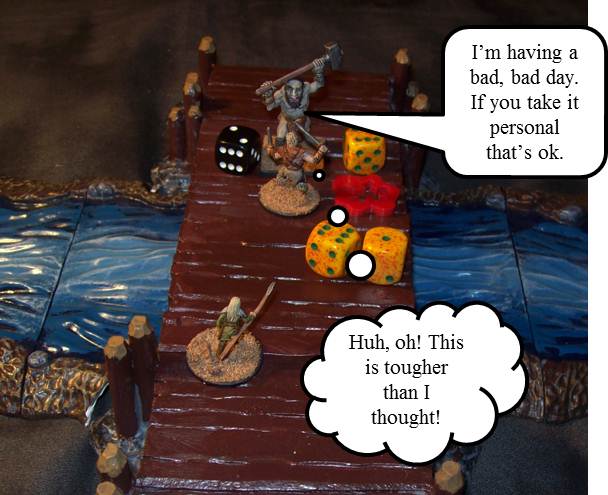 Summoning all his strength the Barbarian lands a solid blow on the head of the Troll! But it merely momentarily stuns the giant creature. 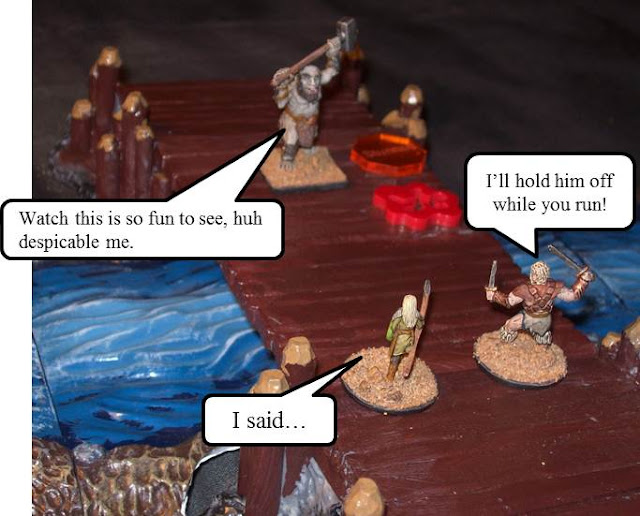 Thinking it smarter to retire and regroup the Barbarian moves back to the bridge to protect the elf.  She shoots him a fiery glance and replies with action... 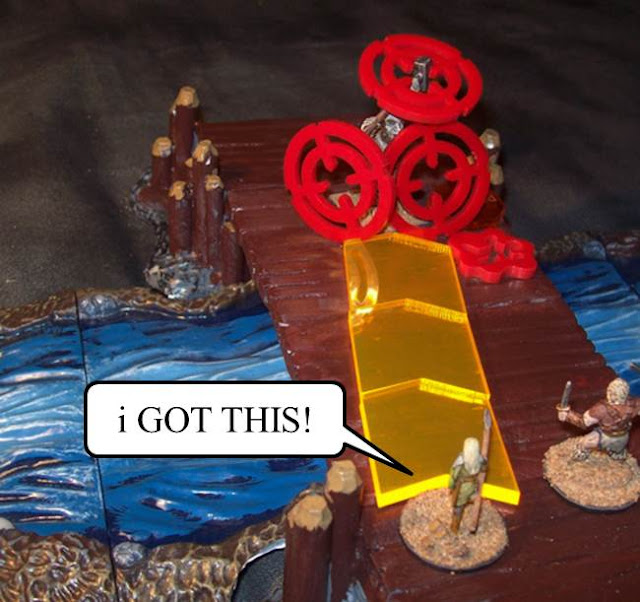 The Barbarian feels the heat as the magic flies towards and hits the Troll. With a scream mixed of surprise and pain the Troll falls to the ground, Out of the Fight. 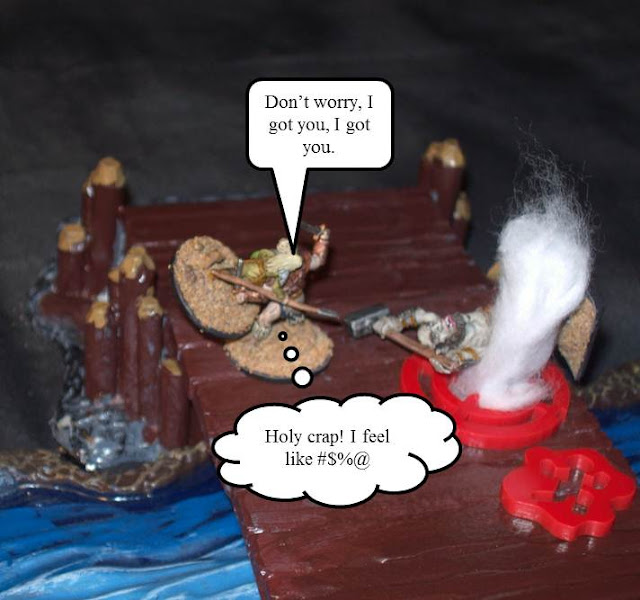 Before the Barbarian can speak the exhausted elf drops to the ground. The Barbarian rushes to he side, lifts her over his broad shoulder and carries her across the bridge to the opposite side of the river.

Troll Rep 6
Fearless: Immune to Fear.
Hard as Nails: Once during each Encounter the character will treat its first Obviously Dead result as a Knock Down result instead.
Magic Resistant:
Massive: Count Impact at two lower but not less than Impact of 1when taking damage and count Impact 2 higher when delivering damage in Melee.
Rage: +1d6 when charging on the Charge into Melee Table and +1d6 when in melee
Slow Mover: -1d6 when taking an In Sight
Stout: Whenever Stunned roll 1d6 versus Rep.
If pass 1d6 will immediately remain on feet and cannot react but will be able to act when next active.
If pass 0d6 will be stunned as normal.
Terrifying: Causes Fear in any character unless fearless or immune to Fear. When a character Fears an opponent:
Counts a -1d6 when in melee with this opponent.
Always counts the Fast Moving penalty when firing at this opponent.
Counts a -1d6 when taking the Charge into Melee Test.


I knew the Elf was a Rep 5 Caster/Warrior and the Barbarian Rep 5 Star with some serious Signatures but this was a Troll. And Trolls are Bad Ass.
I'd start with two Rep 4 Warriors and the In Sight was rolled. The warriors would go first. I thought I'd send one in first then the other as they had scored the same In Sight scores. The Charge into melee test was taken and the Troll scored better but the warrior could still charge. Into melee they went with the Troll rolling 10d6 and the warrior, after feeling the effects of Fear rolling 6d6 and looking for successes. Bam! Not even close and the Troll rolled a "1" for damage, Obviously Dead.

The second warrior took a Man Down Test and passed 1d6, Duck Back. The warrior headed for the woods from whence he came.
The Troll activated and tossed the dead man into the river.
Well things went pretty much as I had expected. So activation was rolled and Elf scored first. Time to see how magic would work. Except the Barbarian scored higher in the In Sight and I figured there was no way a big Barbarian is going to stay behind a tiny Elf so he charged, the troll stood and melee went off.
Troll rolled 10d6 and scored 6 successes and the Barbarian rolled 8d6 and rolled fantastic, 7 successes! Yeah, I'm gonna cut this chump in half. One! Nope, 5. Stunned and the Troll didn't even fall down!
As the winner I could continue my move but not attack so I figured that the object was to see how magic worked anyway so retired.
Okay so the Elf acts now and I'll try a spell. Poof, success. Now to see how damaging it will be. Magic works a bit differently in WHL. You have three spells to choose from, Damage, Dazzle, and Defend. I wanted to try the Damage Spell. To sum it up you roll d6 for the Caster and d6 for all the targets compare and if the Caster scores more successes the spell if effective. The more successes over the more effective. So I went down the list of modifiers and bam, the Troll was Magic Resistant! This doubles the target d6. Not good but the Caster has Magic Power Dice that can be used to increase the chance of the spell working. The Elf had 5 so I used them all.
Long story short the Troll got fried, Out of the Fight, but the Caster became exhausted by using all of her Magic Dice and fell to the ground Stunned for 1 turn per Magic Die used.

Anyway, still have some play testing but I'm liking where this is going.