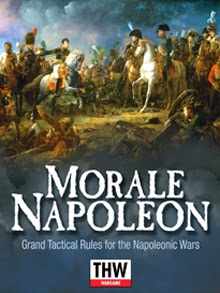 Coming early next month, Morale Napoleon. Playable with any figures that you may already have. Players command a Corp or more - 16 to 24 battalions and can get a game in within 2 hours and on a 2 x 2 foot table or larger. Includes 20+ Army Lists, full Campaign rules, and a mini-campaign as well.
Watch for more info in the next few days.

I Love LA - An AAR for Action! The scenario book for Larger Than Life - Director's Cut. 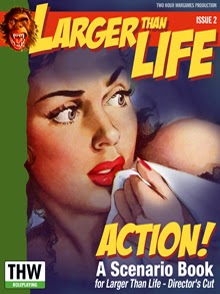 Action our first scenario book for Large Than Life - Director's Cut, contains 3 full adventures. Each is complete with new Stars, Co-Stars, Big Bads, Femme Fatales, and more. Let's introduce you to one of the Stars of Action. 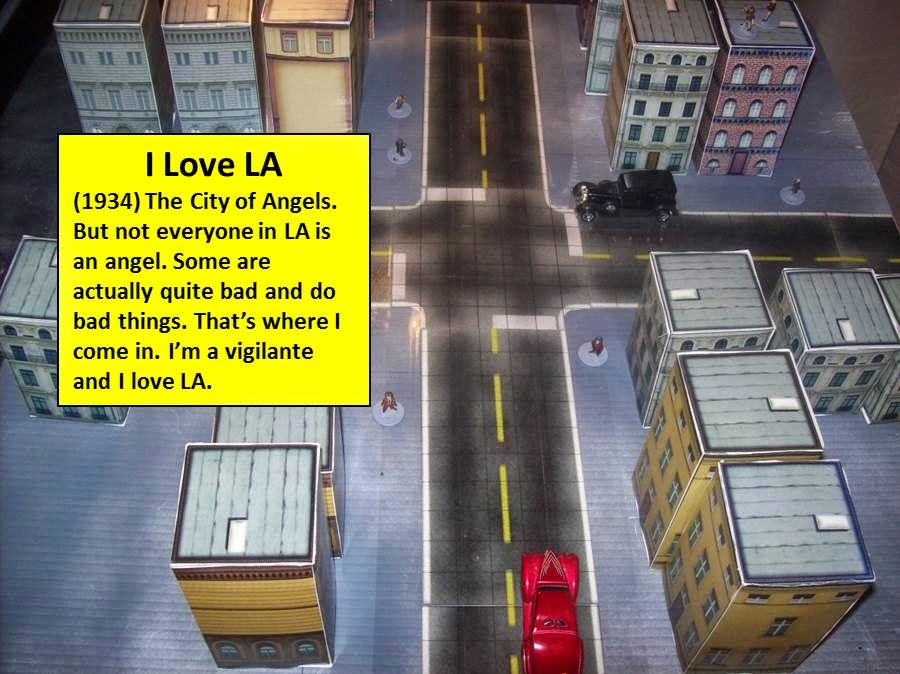 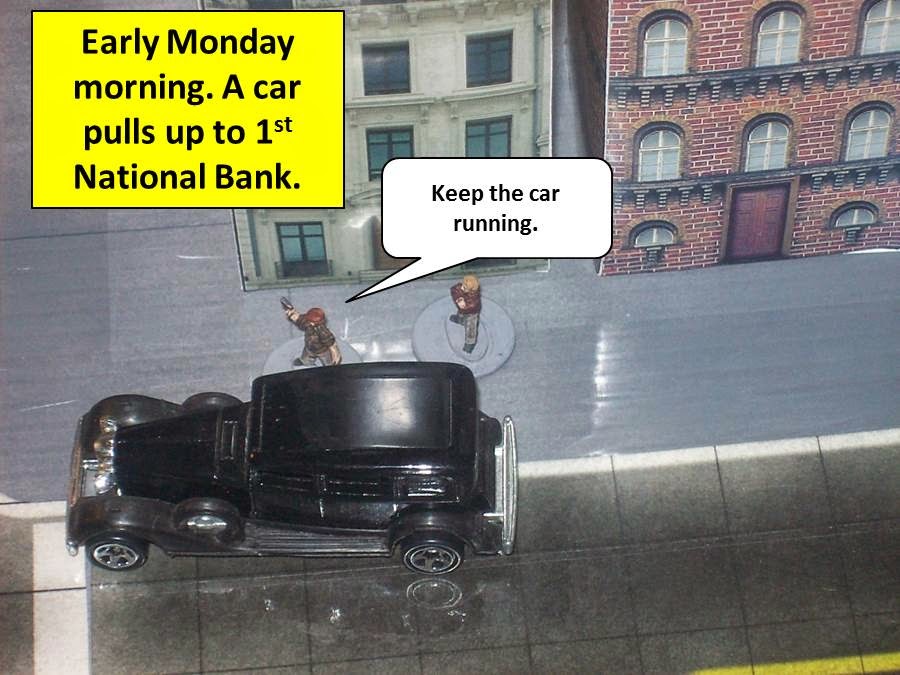 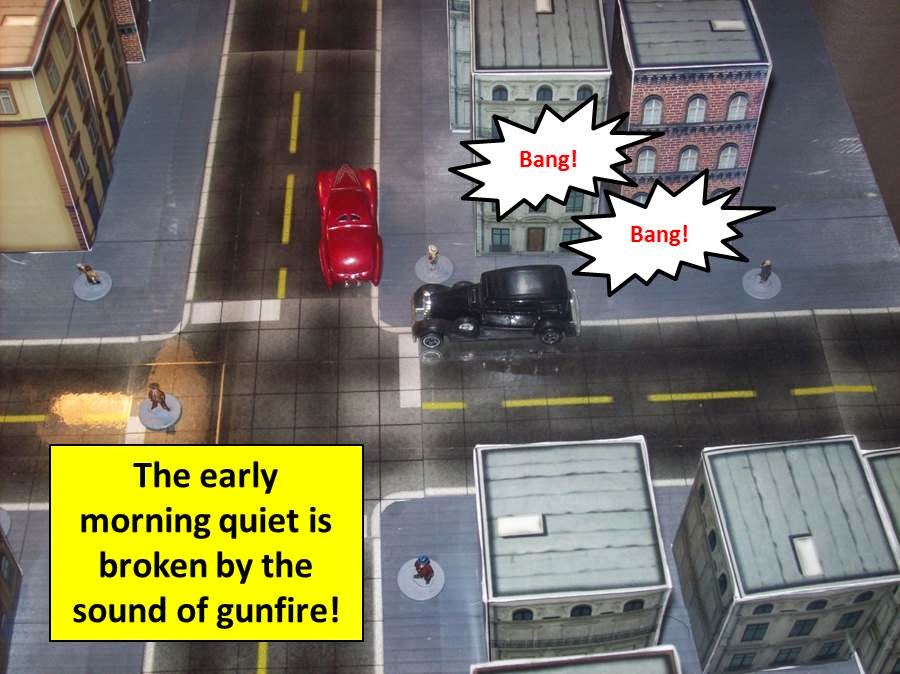 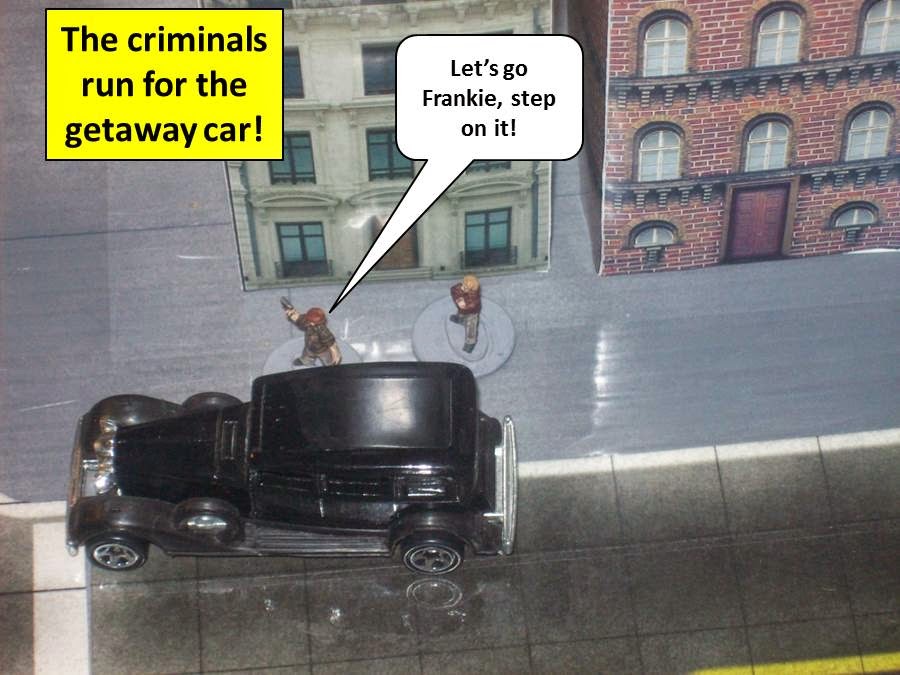 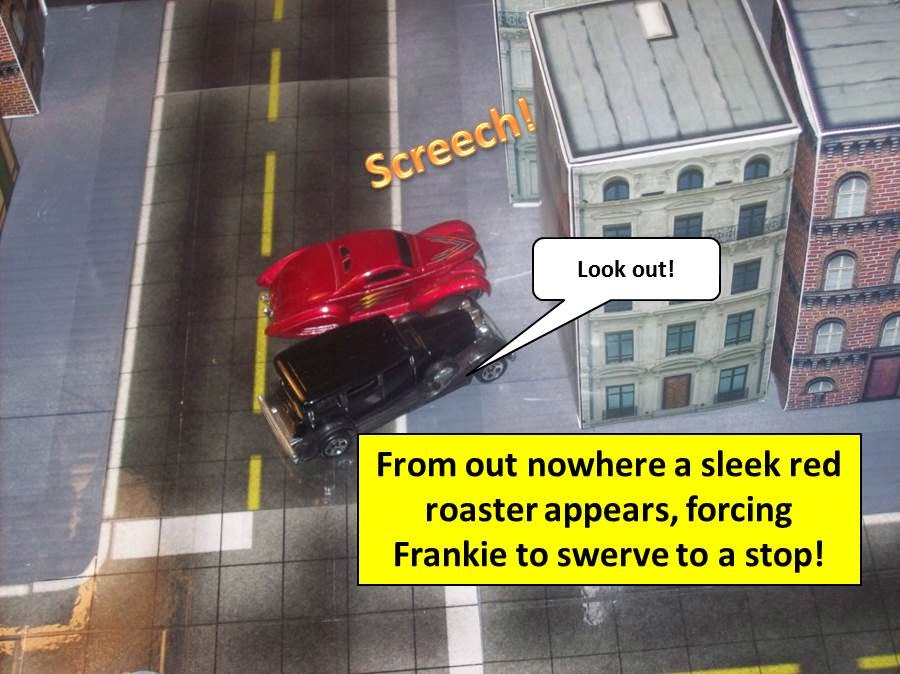 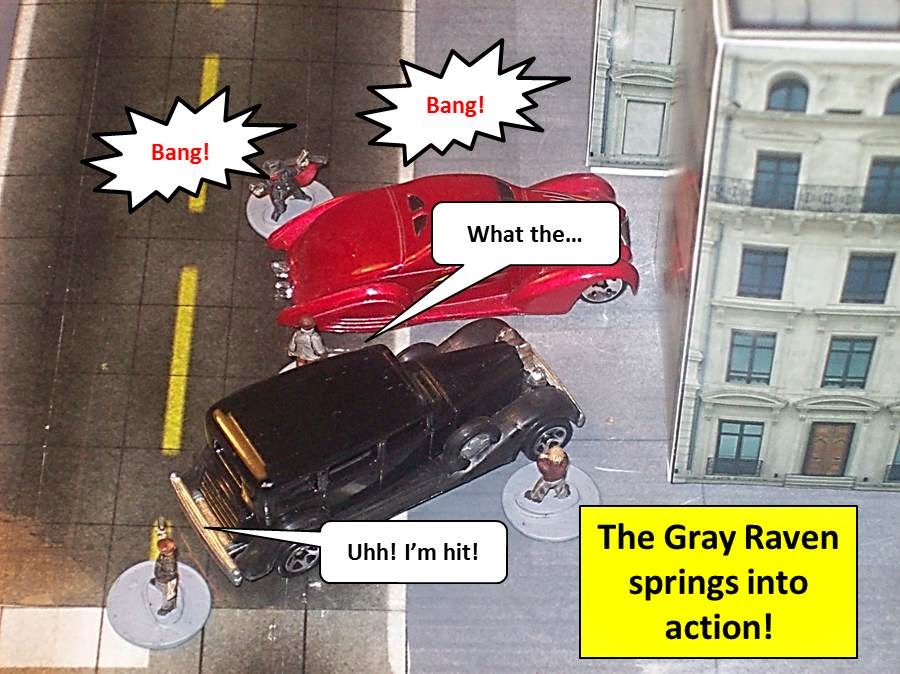 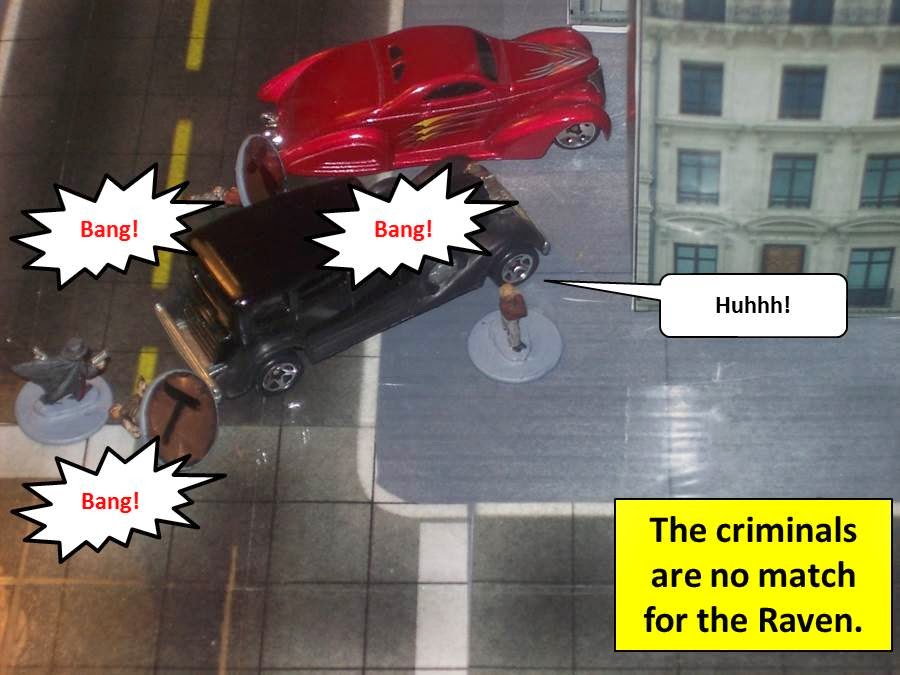 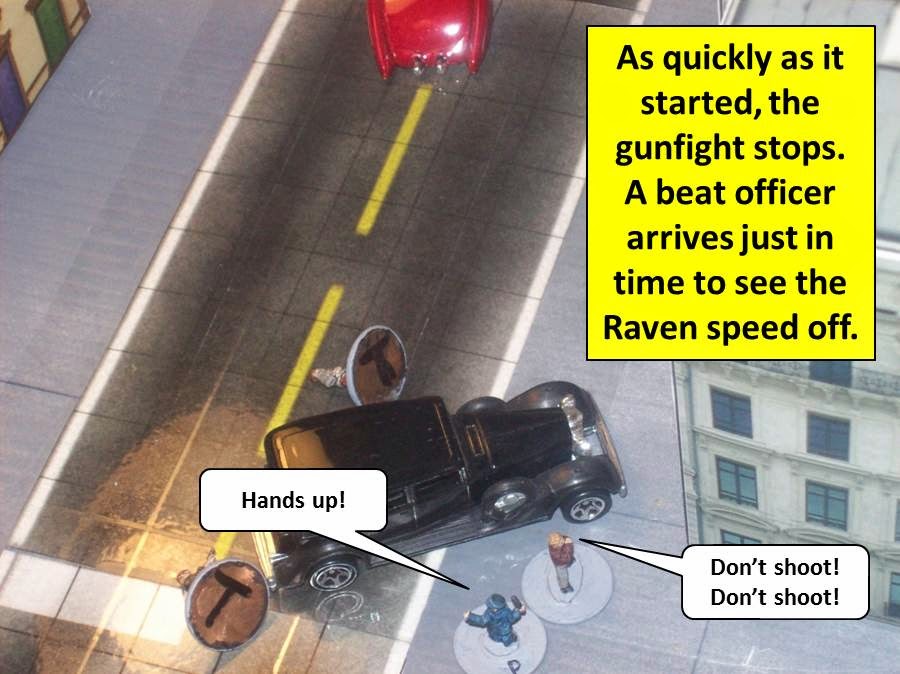 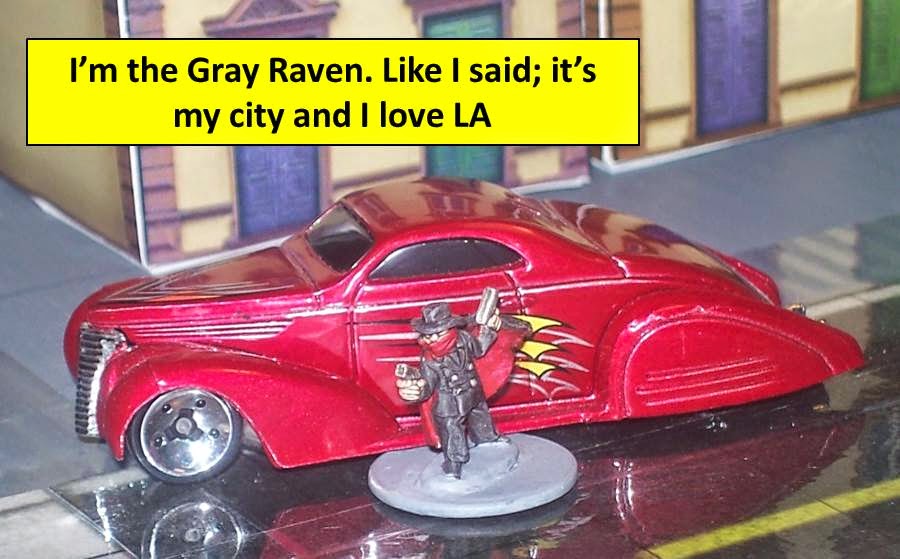 A look behind the scenes:
A 2 x 2 foot table was used. Action provides some simple table top mechanics taken from Chain Reaction for the close up action when you want to go right to the action, instead of traveling the board and interacting with PEFs.

The actual robbery inside the bank was done with a Talk the Talk test that the criminal failed badly - resulting in gunfire.

The Raven had been tipped off by his wannabe Love Interest Robin Duncan (also in Action). When Raven activated I wanted him to cut off the getaway car - used a Physical Challenge and passed. As you may know, I needed to set up the success and failure before the Challenge was taken. If Raven would have failed,  he would have crashed into the getaway car with all passengers in both vehicles counting as triggering a Danger Factor 3 Trap (LTL-DV page 58). I use Traps to resolve one-off  chances of damage outside of shooting and melee combat.

Watch for the next AAR featuring the Gray Raven.

Heroes of the Colosseum - Last Chance to save $10

LnL is actually boxing up to ship Heroes of the Colosseum and you can still get the $10 off pre-order special but not much longer. Get it here. before they pull the discount. Posted by Ed the THW Guy at 19:17 No comments:
Email ThisBlogThis!Share to TwitterShare to FacebookShare to Pinterest

ATZ Reloaded- Now or never! Ships next month - save $$ and pre-order. 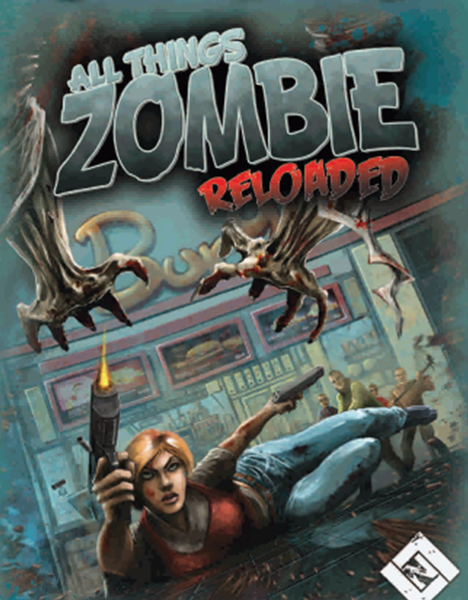 As you've heard, ATZ Reloaded is the miniatures version in board game form. LnL is currently taking pre-orders at a $10 savings. I just received this from David, the new LnL owner, and posted to the forum.

The delay was in counters and now they are being produced in Denver, down the street from the home office. I've seen and have a set, these are great counters.  So if you want to save the $$, don't hesitate. BTW - The game is true to the minis game.

Posted by Ed the THW Guy at 08:26 No comments:
Email ThisBlogThis!Share to TwitterShare to FacebookShare to Pinterest

All sets sold - may get more in the future.

Each weighs about 1/2 ounce and is about 1" in diameter.

You get 2 gold, 3 silver, and 5 bronze and work great for 2 Hour Dungeon Crawl.
$20 a set of 10 plus shipping - We combine shipping so one charge would get you multiple sets.
Buy more sets and get a discount too! 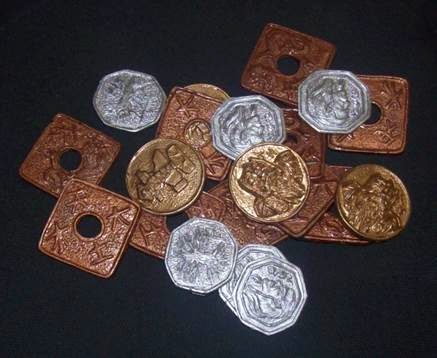 Posted by Ed the THW Guy at 09:01 No comments:
Email ThisBlogThis!Share to TwitterShare to FacebookShare to Pinterest

Here's the rough of the cover. 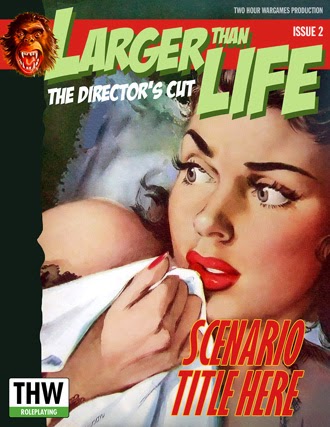 Lights! Camera! Action!In Larger Than Life – Directors Cut you learned that it all boils down to the Story and we gave you the tools to create them. In Action we’ve taken it a step farther; now we’ve given you three full blown adventures. Each Story comes complete with pre-generated Stars, Co-Stars, Big Bads, and more, but they will work just as well with your own cast.Story #1 – You’re “Duke” Clayton, world traveling adventurer, and you’re girlfriend Leilani, has been kidnapped by a power crazed villain – and what about Hooni, the Great Squid God?Story #2 – You’re the Gray Raven – a Vigilante whose current case involves stolen artifacts and murders – not one, but many. You’ll be required to bring your best as you travel south to a Hidden Valley deep in the Peruvian jungle.Story #3 – It’s Germany 1935 and there’s been a scientist kidnapped. In our 3rd adventure we’ve given you a classic pre-World War II spy story, but with a couple of twists.Inside you’ll find:· Three pre-generated Stars that can also be used in your other games.· New Attributes to further expand your selection of Stars, Co-Stars, and Big Bads.· New Big Bads and more Minions. · New Professions.· A whole stable of re-usable Grunts. · A variety of locations that take you around the world and can also be used again and again.· All this and more.Action gives you three complete Stories and loads of new material that can be used over and over in your own Large Than Life games. We could tell you more, but the time for talk is over. It’s time for ….Action!And what about the Dinosaurs?Coming later this month!
Posted by Ed the THW Guy at 09:40 3 comments:
Email ThisBlogThis!Share to TwitterShare to FacebookShare to Pinterest

In Sight Test - Easy to do once you get the hang of it; here's a quick tutorial.

Here's a quick 2 minute video using the slideshow format for ease of stopping, starting and reviewing.
Posted by Ed the THW Guy at 15:15 No comments:
Email ThisBlogThis!Share to TwitterShare to FacebookShare to Pinterest
Newer Posts Older Posts Home
Subscribe to: Posts (Atom)