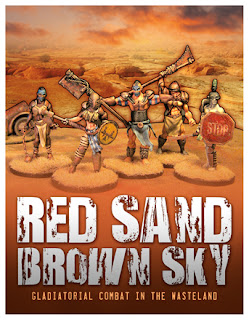 She just wanted a drink, a drink and to be left alone. But after a few minutes at the settlement bar she found herself talking to some clown.
“C’mon baby, you’re new in town. I could show you around,” he said. “Just an innocent date, that’s all.”
She looked up and repeated. “Leave me alone.”
Stinky Breath leaned in and grabbed her arm with a smile. “That’s not too friendly…”
“I already told you once, I don’t date clowns.” Beth pulled her arm away and as Stinky Breath stumbled forward she drove an elbow into his face. The bar erupted as survivors went to their weapons as the bloodied man fell to the floor. Beth cleared the chair and drew her pistol, surveying the room for threats. Stinky Breath got to his feet and screamed.
“You %i#*$!” he yelled. “Fight! Fight! I demand the Right to Fight on your scrawny a$$.”
Beth was shaking from adrenalin as the noise grew louder with shouts of “Kill the clown!” and “Teach her a lesson.” The Councilmen were called and arrangements made for the fight. It would be settled right now. 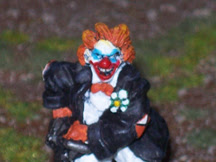 ***************************************************
This is an AAR for Red Sand Brown Sky the soon to be released free supplement to Red Sand Black Moon the game of Fantasy Gladiatorial Combat. RSBM allows players to use any fantasy figure in gladiator matches and RSBS takes it a step further. Red Sand Brown Sky allows players to use any modern day or Post Apocalypse figure in gladiatorial matches. Think Thunder Dome. In this AAR I used two figures from the All Things Zombie range of 28mm figures from Acheson Creations. The clown with a chainsaw is one of my favorites so I was looking forward to seeing how he’d do in RSBS. You’ll see more of this line in the crowd as well as figures from other manufacturers.
Acheson Creations
RSBS also ties into the After the Horsemen  PA rules from THW to be released later this month. ATH is human centric and doesn’t have zombies, etc. ATH is about regular folks trying to survive and thrive after the “world has ended”.
This fight takes place in a Settlement off of the Fringe of the Wasteland.  This actually started out as an ATH Encounter but quickly switched to a RSBS fight. In the ATH world survivors can fight these matches “professionally” or in response to an insult. Basically if you are insulted you can offer a challenge, the Right to Fight. If you refuse you are forced to leave the area or stay but be seriously disrespected which takes a variety of forms, none pleasant. The two characters didn’t do well on a People Challenge interaction from ATH so Stinky Breath took it as an insult. In any case, on with the story.
*****************************************************
Word of the fight spread quickly as the two made their way to the dirt arena on the outskirts of the Settlement. A crowd has already gathered when Beth and Clown made it. Everyone loved to see the Clown fight. I mean, not every day could you get a chance to see someone chopped up by a chainsaw! Even Ranae the Rat Girl was there. 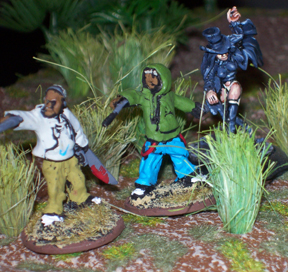 Ranae the Rat Girl and a couple of other survivors.

The Clown’s posse arrived and brought his chainsaw. As they took their places in the crowd the two combatants entered the arena from opposite ends. 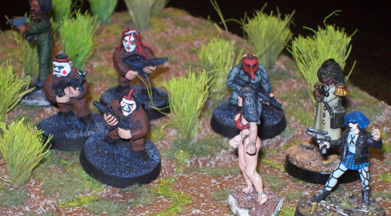 The Clown posse and other spectators.
The Councilman in brown hood entered the arena. He looked over at Clown boy and opened his book. 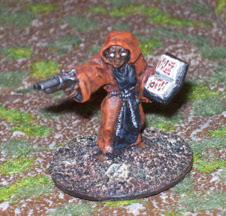 Councilman Jones.
Writing down the Clown’s name he turned and asked Beth, “What’s your name?”
“You pick one,” she replied.
Unfazed he continued, “How do you spell it?”
Furious she yelled, “Beth! Beth! My name’s Beth!”
The Councilman just smiled and entered her name into the village history book. “You all know the rules and I only have one question. Yield or Die?”
Stinky Breath wiped a ball of spit from the corner of his mouth and leered across the arena. Yanking the cord his chainsaw roared to life. “Yield! I choose yield!”
Beth spat on the ground, “Die! I choose die!”
“Then fight!”
The crowd went into a frenzy as the match began. Bets were made on the local Clown and the stranger from the Fringe. Bets were taken on first blood, who would win and even on which body part the killing blow would be delivered. Nothing brings a village together like a good bloodletting.
******************************************************** 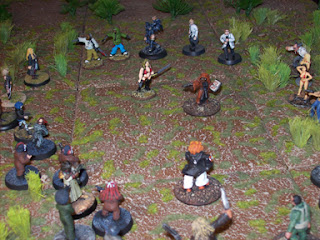 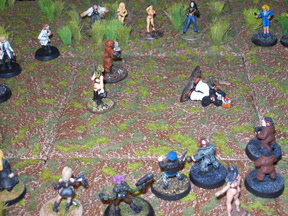 Bam! A Big Ass Pistol shot to the chest puts the clowns down.
RSBS has a variety of weapons from one hand cutters, like a knife, to chainsaws and even flamethrowers. So of course there has to be modern firearms. Beth had a BAP and a machete as back up. But just like chainsaws have their limits, they can run out of gas, so do guns. You only get one bullet in the arena. And you better make it count.
*****************************************************************
Clown boy stood up and rubbed his chest. “You got blood on my coat,” he said. “That pisses me off, scrawny.” Giving more juice to the saw he charged forward. Beth ducked under the saw and slashed the Clown in the belly sending him backwards.  The crowd yelled its delight while the Clown posse looked on in disbelief. 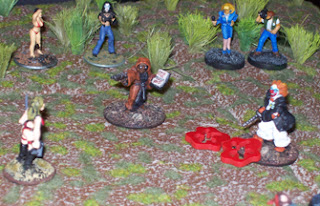 A slash to the belly sends the Clown reeling. 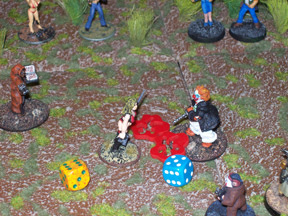 The yellow 6 shows Beth's Maneuver score and the blue 5 shows the Clown’s. Game wise this means Beth will attack head on. 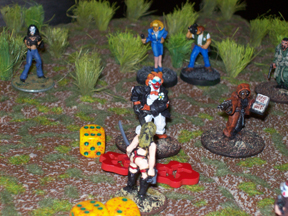 Clown moves forward and the two go to the Maneuver Table. Clown scores 6 successes but Beth scores 8. Beth scores higher so will be the attacker and gains an advantage! 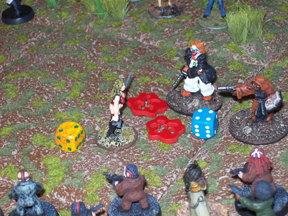 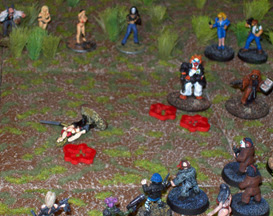