A Gargoyle? Really? A RSBM AAR

Tomas watched as the slaves dragged the Orc from the arena. The Dark Elf, having barely worked up a sweat, bowed low at the waist towards the private box. Above the arena sat the Dark Elf royalty sipping drink and dining on finger foods. The nobles laughed and carried on, oblivious to the ongoing spectacle of death, as the Patron entered the arena, black jar in hand.
As the crowd took advantage of the break to seek food, relive their needs and drink more heavily the Patron reached into the jar and withdrew a small clay tablet.
“Tomas of the Border Kingdoms,” he yelled over the din. Looking up towards the box the Patron and the Queens eyes met. She stroked her long dark neck and motioned for he hand maiden to fetch some wine. The Patron again reached into the jar and knowingly went to the clay tablet attached on the bottom of the jar. Prying it up with his fingers and with no sign of emotion he withdrew the tablet and yelled, “Churnabogg!”
The crowd became deathly silent, the nobles turned to the arena and the Queen smiled ever so faintly.
As Tomas walked through the arena gate he saw a terrifying sight. As a young lad his Mother scared him with tales of Gargoyles and as he grew older he reasoned that they weren’t real. He was wrong.
Churnabogg slowly flew over the arena as the crowd cheered. Tomas swallowed hard and walked towards the center of the arena, sword drawn. The Patron waved his stick, signalling the start of the match. Churnabogg landed gracefully inside the arena opposite of Tomas and walked forward.
***********************************************************
A Gargoyle? Really? Last match Tomas fights a peasant and now a Gargoyle. How is that possible? Well that would be everything lining up just right, or wrong if you’re Tomas.
I chose to go to the Dark Elf lands to gain Fame by fighting better opponents but a Gargoyle? First I had to roll a “6” on the Match Table on the Second Tier Locale. That gave a result of “Special” which took me to another table. Another d6 roll and a “5” came up…Gargoyle. What luck?
The Gargoyle is a tough opponent with a Rating of 17. Tomas has a Rating of 12. The Gargoyle has AC 2 and claws like a two handed axe but without the reach. He was Hard as Nails so would be difficult to knock down but worse then that he was Terrifying and Tomas was terrified. This meant he would lose 1d6 on the Maneuver and Attack Tables until he inflicted damage. My only chance would be to use my Bonus Dice wisely and have a bit of luck. The Gargoyle (1) reached the center of the arena and it was time to attack!
(1) I had to use a proxy figure for the Gargoyle. I used six Bonus Dice, trying to gain an advantage but the Gargoyle used the same. This was randomly determined. The Gargoyle has Savvy 6, Strength 6, and Speed 6. Tomas is a 6/4/4 so was a bit slower on the Maneuver Table. I wish I had taken that into consideration at the start of the match. Maneuver concluded with Churnabogg gaining the unshielded side. 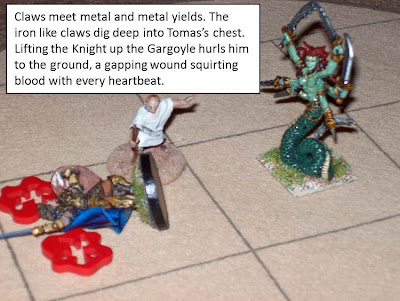 Yikes! Tomas takes a serious wound in the chest, loses 2 of his 4 Strength and is a Bleeder. The Gargoyle rolled 7d6 AFTER deducting 2d6 for Tomas’s armor. 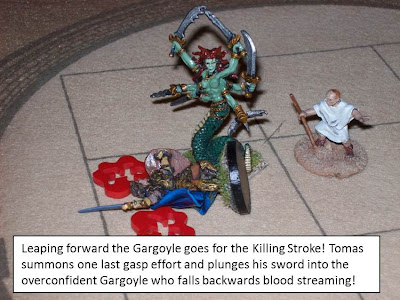 The Gargoyle went next and attacked the prone Tomas.  I spent all but three Bonus Dice on a frantic attack. There was no way I could continue with a Bleeder result. Being a bit smarter I waited for the Attack Table to spend the Bonus Dice. Tomas won and rolled for hit location. As Tomas had the Swordsmen Signature he would be rolling twice. The best result was the chest and Tomas scored a -3 Strength wound and Knock Down. Except that with the Gargoyle being Hard as Nails meant the first Knock Down didn’t count. At least Tomas was no longer terrified of Churnabogg. But he was running out of steam. 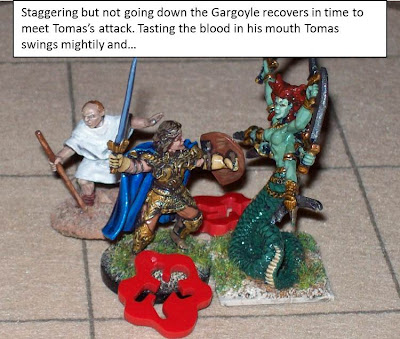 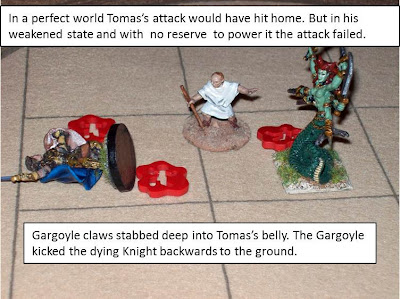 With little Bonus Dice left, I had to save 3 for the Bleeder result, Tomas needed a lot of luck. He got it as in “no such luck” and took another bleeder result to the belly. 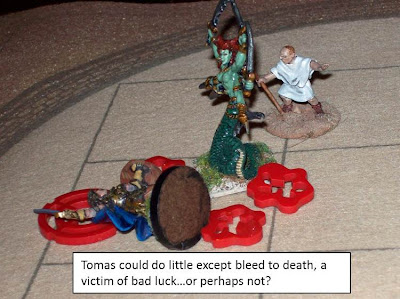 I learned that when outclassed speed wise its better to give up on the Maneuver Table and use your Bonus Dice on the Attack. If I had to do it over again I would have discarded the shield in favor of using the sword with two hands, to gain damage dice.
RSBM - easy game to learn but a bit harder to learn how to play well.