Movement Template for And a Bottle of Rum

There are nine of these, one for each setting, that makes movement on the table very easy. just place the  so it matches the wind direction and go from there.

For ease of play the wind direction is simplified to the four table edges. 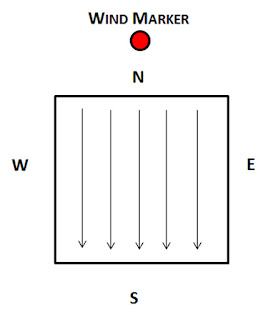 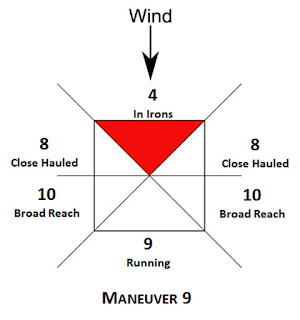 Posted by Ed the THW Guy at 12:37 No comments:
Email ThisBlogThis!Share to TwitterShare to FacebookShare to Pinterest
Labels: AARs, And a Bottle of Rum, Two Hour RPGs, Two Hour Wargames

Big Sea Battle for "And a Bottle of Rum!" 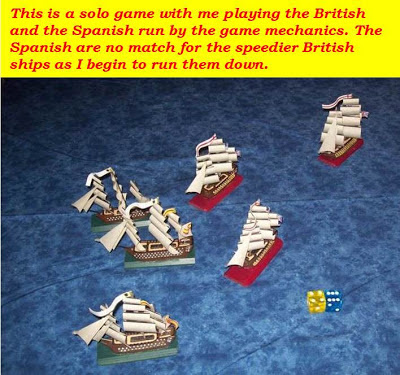 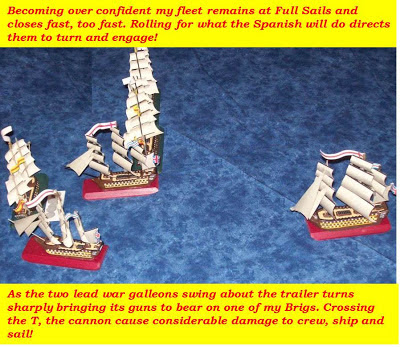 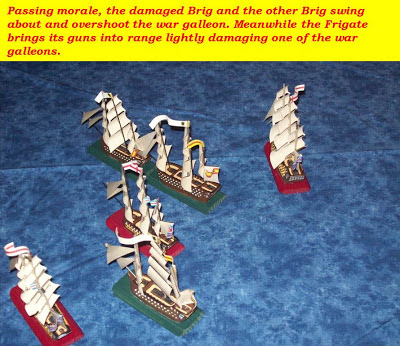 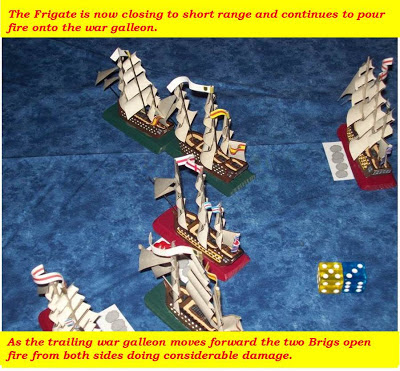 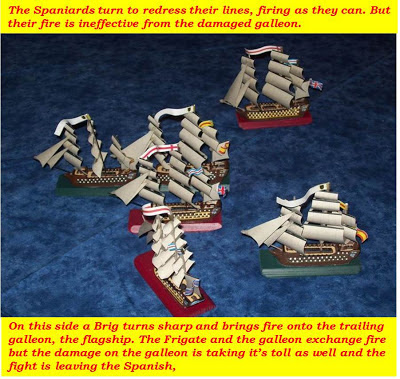 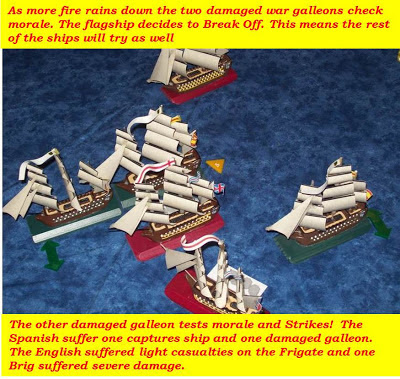 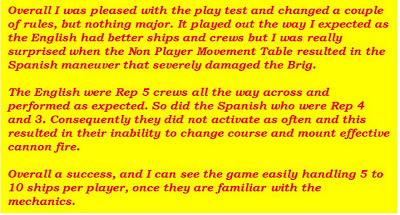 Posted by Ed the THW Guy at 16:33 3 comments:
Email ThisBlogThis!Share to TwitterShare to FacebookShare to Pinterest
Labels: AARs, And a Bottle of Rum, Two Hour RPGs, Two Hour Wargames

Step by Step "And a Bottle of Rum" Part 3

The next day after the robbery attempt Billy goes back to the shipyards and buys the 500 Gold Piece 4th Rate Merchant. He also spends an additional 40 Gold Pieces to add 2 more guns. This gives him 5 guns total but reduces his cargo capacity by 10% to 45 crates. This leaves Billy with 80 Gold Pieces.

He names his ship Billy’s Revenge.

To keep it simple when you buy a ship you get the minimum crew needed to operate it, 10 in this case. Billy needs three Specialists so sets three aside. Billy can now roll for the Reps of the 7 crew members and pay them 1 Gold Piece each.

Next he rolls for the three Specialists, a Chief Gunner, Pilot and Cook. Each also gets paid 5 Gold Pieces.  Note that the Captain can act as the Pilot but a one point of Rep lower than his actual Rep.   But when doing so cannot do anything else.

After recruiting and adding his original band to his crew Billy has 6 x Rep 5 and 8 x Rep 4 crew.

Billy now has a ship and a crew. He has had one Encounter (Carousing) so the month is ended.

He does not have to take the Personal Loyalty Test, to see what the crew thinks of him, as they are not at sea yet. 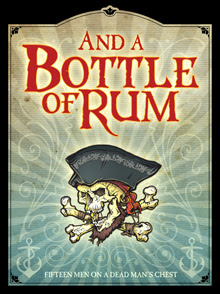 “And whatever happened to your youngest, dear?” asked the elder tradesman. “What was his name? William?”

The mature woman’s eyes lit up at the mention of her son. “Billy?” She said with a smile. “Billy’s gone on the account me thinks. He said he was off to join the navy but I doubt ‘tis so. Always was a bit of a free spirit. Now if you’ll buy me a drink we’ll be on our way to a right, fine, evening.”

“Three,” the banker said. “Winner, to the Captain...” The banker continued as he slid 40 Gold Pieces towards Billy. “Bet the turn Guvnor?”

Billy tossed 20 more on the table and waited as the banker drew a card. “Two,” he said, taking Billy’s money. “Another game sir?”

Billy tossed back the last of his ale and shook his head. As he left the tavern he noticed three fellows abruptly get up and head his way.

“And a Bottle of Rum” is the latest title for Two Hour Wargames scheduled to be released before the end of the month. Here’s a step by step rundown of how you generate your character. “Rum” is more than a game about sailing ships. There are rules for adventures when you’re onshore as well as rules for ship combat. There are even Big Land Battle rules when you want to play games with a large number of units and figure.

In the game you start as a pirate captain in the Caribbean around the 1600’s or Golden Age of Pirates. Or if you prefer a bit of fantasy you can start your career in the continent of Lemuria.
In either case you use the following steps to create your Captain and get going. Generating your character will take about 15 minutes and require some dice rolling. I decided to create my first character, Captain Billy Pink. Here’s how I did it.

As Billy is a Player Character and not run by the game mechanics I chose to make him a Star.

I decide he is English.

As a Star he gets two Attributes. Attributes are recognizable traits that help to define the characters. All characters have one Attribute based on their Class (profession) while player characters and player Grunts (crew members) can have individual ones if desired. I choose the first, Initiative. This gives Billy a +1 to his Rep for Activation when he is alone. This is a double dip Attribute as he counts it when alone onshore and when he is the Captain of a ship when he is the only ship in his fleet.

The next Attribute I roll for and get lucky, another good Attribute. Wary counts a +1d6 bonus when taking the In Sight Test.

Billy also gets Brawler (+1d6 in melee) for being a Pirate as well as a +1d6 when taking the Charge into Melee Test when fighting Big Land Battles.

I choose the Pirate Class. I could have chosen Military, Pirate Hunter or others but hey, it’s a pirate game.

For weapons Billy has two Pistols and a Sword.

He is allowed to recruit his first band of Grunts and rolls quite well, scoring three Rep 5s and one Rep 4. The only concern is that the Rep 5s may decide to go off on their own if given the chance.

Billy starts with Fame of 0 and Personal Loyalty of 5. These are given and no rolling is required.

I take the remaining Items (7) in Gold Pieces. He also gets 500 to start with.

I choose to start in an English Settlement in the Caribbean, with a low Activity level of 2.

Billy goes to the shipyards and finds out that there are two 4th Rate Merchant ships available for purchase. One would cost 500 Gold Pieces, almost all of what Billy has and the other 650 Gold Pieces.

I decide I’ll take Billy Carousing in the Settlement and play some Farobank. In “Run” there are rules for playing this 17th Century card game using d6. Easy to learn and there is some skill if you choose to use Bonus Dice. But I don’t like using them as they may come in handy later.

So I play some Farobank and win 120 additional Gold Pieces. However, when you are finished Carousing there is a chance, depending upon the Day Part and other factors such as winning at Farobank, of you being robbed. Yes, you guessed it, I rolled for Billy and he was going to get robbed.

Once outside Billy is set upon by four thugs intent on robbery. This is a result of the Carousing Encounter (see Part One).

Rolling up for how many robbers results in four, 2 x Rep 4 and 2 x Rep 3. Lucky for Billy when testing to see if there was a robbery, Billy passed 1d6 - allowing him to be suspicious and making the robbers count as active. This meant they would count a -1d6 when taking the In Sight to see who would act first. 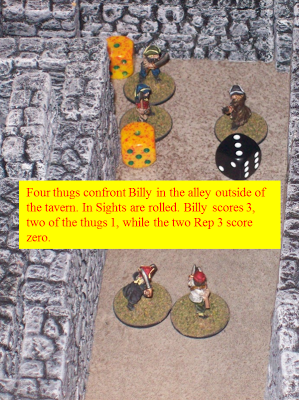 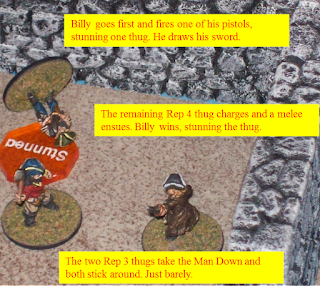 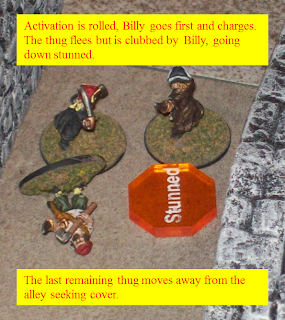 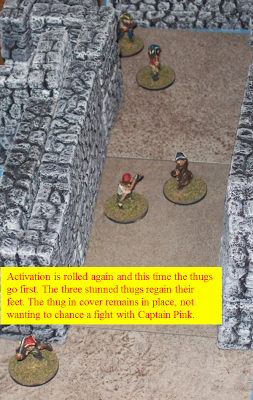 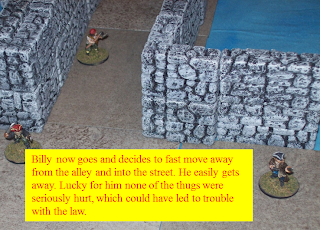 Having escaped Billy heads back to the inn and settles in for the night. Tomorrow would be the shipyards.

Great Toy for the Grand Kids!

And  now for something totally different!

Captain Morgan and, well A Bottle of Rum - A CR3.0 Adventure

... and here's the scenario. You can play it with Chain Reaction 3.0 with little adapting or with the upcoming "And a Bottle of Rum!". 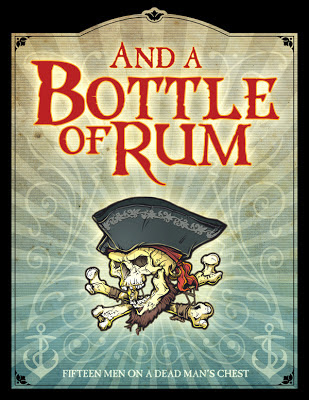 Posted by Ed the THW Guy at 20:13 No comments:
Email ThisBlogThis!Share to TwitterShare to FacebookShare to Pinterest
Labels: And a Bottle of Rum, Pirates, Two Hour RPGs, Two Hour Wargames

And a Bottle of Rum - More Info!

Here's the back cover for "And a Bottle of Rum!" 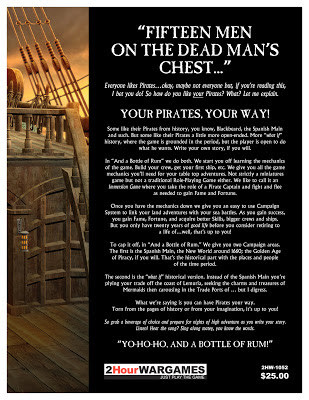 The Cops are gone and so are the Army. But here's 5 new Humans - 2 Gangers, 2 Survivors, and 1 Civilian.

A by-product of the Lazarus Project (I, Zombie supplement), 5 Smart Zombies with a little more on the ball than the average zed. Armed and dangerous. They may not hit you with that shotgun but they sure can attract more zeds!

Resulting from the ill-fated Lazarus Project, Rage Zombies!  Fast and vicious  5 new ones for you to chew on, or them to chew on you.

Welcome to the Horror Show

5 new figures that will come in handy if you meet them ;-) 2 Vampires (1 male and 1 female), 2 Casters (1 male and 1 female) and 1 Werewolf.
Posted by Ed the THW Guy at 15:17 No comments:
Email ThisBlogThis!Share to TwitterShare to FacebookShare to Pinterest
Labels: All Things Zombie - Final Fade Out, Indiegogo Crowdfunding, Two Hour Wargames 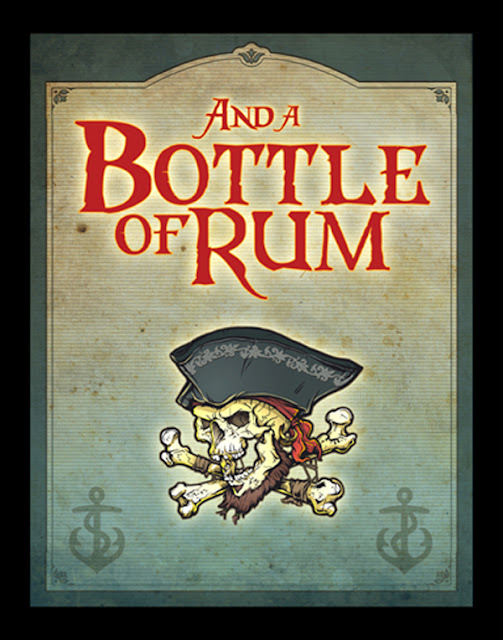 Posted by Ed the THW Guy at 13:12 8 comments:
Email ThisBlogThis!Share to TwitterShare to FacebookShare to Pinterest
Labels: And a Bottle of Rum, Pirates, Two Hour RPGs, Two Hour Wargames

Carol the Business Woman in human and zombiefied form. Click the link for more info. 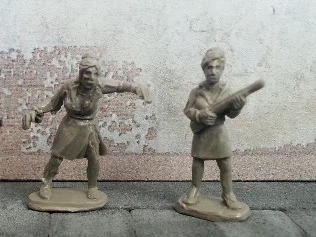