This is a 5150 No Quarter step by step report. Using the Step by Step section included in the rules we will explain how to get into the game:
·        We start with choosing a Faction. I choose a Free Company – Mercenaries that fight in the employ of others.
·        For demonstration purposes I choose to use only one Mech. Normally the minimum is a Squad of six Mechs broken down into two Teams of three.
·        I choose a Rep 5 Star.
·        We use Attributes to make your Mech Pilots unique. As a Star I get two, Grunts (Non-Player Pilots) get one. I roll for the 1st and get lucky – Quick Reflexes allowing me to count a +1d6 on the In Sight Table. I choose the 2nd Attribute and go with Marksman. This lets me roll twice for location when scoring a hit, taking the best result.
·        I fill out my Mech Roster Sheet. I’ve decided I will me playing No Quarter using Battletech 3025 models. Convert the tons (0-100) to NQ Armor Points (0-36). That’s it. Weapons are pretty easy to convert as long as you decide what’s what before the game. Here’s my Assassin Roster.

·        Campaign Morale is 1st.  The Campaign Morale determines how important the area is and what reinforcements, if any, will be available.  My Free Company CM is 3 – the Hishen, my opponent is 4.
·        Next I roll to see if we are Controlling (defending) the planet or Contesting (attacking). Roll 1d6 and add it to the CM of each side. I score a 10 the Hishen a 9. Surprise! I’ll be contesting the planet.
·        Time to pick a Mission. There are three – Patrol, Attack and Defend. The 1st Mission is always a Patrol for both sides. How you do on the Mission determines the what next one will be. It also can increase and decrease your CM and that of the enemy. Get down to a “0” CM and the Campaign ends. Simple rules that give you a reason to fight.

Before the Mission I do not know if there is any enemy, where they could be located, or how many of them there are. I enter the table from section 7 and move into the woods. I can’t see or be seen as I am not within 1” of the edge. 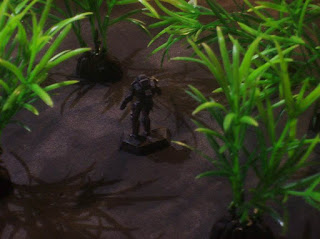 The table is divided into 9 equal sections numbered from 1 to 9. To succeed in my Mission I must spend one turn of Activation within 6” of the opposite table edge in sections 1, 2, and 3. After I enter the table I roll 1d6 for the setup section for the three Possible Enemy Forces (PEFs). These can be resolved as enemy or nothing at all. I won’t know until I have a Line of Sight to them – or them to me. Here’s a picture of the table with the PEFs deployed. 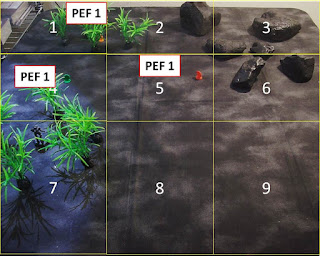