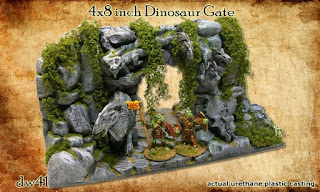 5 backers
ADD-ONS ONLY USA!
This pledge is to cover a one-time initial shipping cost, and allows you to purchase any and all of the Add-Ons that are listed in this Kickstarter. After you pledge to this level, choose the Add-Ons you want and add their listed price to your pledge (US supporters only).
NOTE: Only pledge this level if you wish to select Add-Ons only and have not pledged higher.
Posted by Ed the THW Guy at 14:23 No comments:
Email ThisBlogThis!Share to TwitterShare to FacebookShare to Pinterest 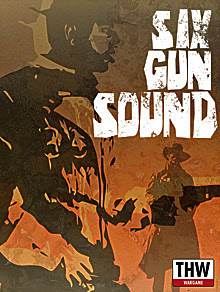 In our last Six Gun Sound AAR we had three Outlaws taking on two Rangers and about a half dozen Citizens. That was a pretty big game and took a bit of time to play. In this AAR we see three characters having a difference of opinion.

***********************************
There's trouble in the New Mexico Territory. Seems like the Cattle Baron Amos Johnson has a new rival for grazing lands. Harry Franklin showed up a few months back, bought a small place, and has a nice little herd of cattle himself. Harry's been hiring on cowboys, even to go as far as bringing them in from out-of state.

Mr. Johnson is what we call proactive. He feels it's better to get the first blow in when there's a Range War.

On the Trail, two of the new Franklin cowboys have run into one of Mr. Johnson's boys - a Gunslinger named EJ Barnes. 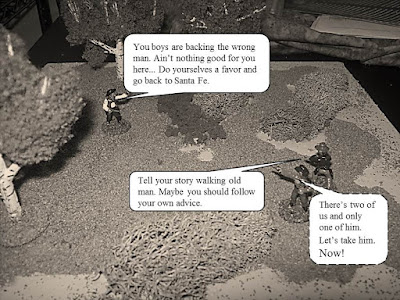 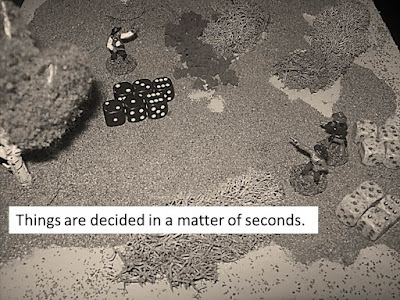 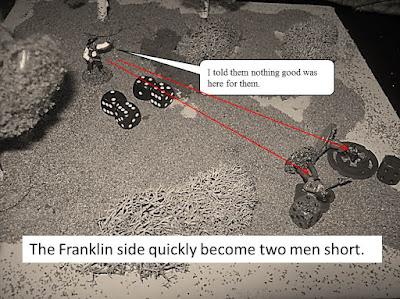 Once that was determined it was time to set it up. I used my 12x12 inch board and set the figures up 6" apart and in LOS. I considered the terrain to be cover although the path between the figures is clear for the 1str round of shooting.

The Draw can be quick or prolonged. Each figure starts with 1d6 per point of Rep and modifies it by what is on the Draw Table. Dice are rolled and we look for successes - a score of 1, 2 or 3. There were 2 cowboys but the Gunslinger had a couple of advantages.

As a Gunslinger he would count a success on a 1, 2, 3, or 4.
Also his Class Attribute was Marksman.  When firing one shot from each pistol (he packed 2) he could roll 2d6 and count the best result.

Dice were rolled, the Gunslinger scored more successes and would fire first. He targets each cowboy with one pistol and rolls 2d6 each. Two hits, one on each cowboy are scored. Rolling versus each cowboy's Rep for damage he scored a "6", Obviously Dead, and a "4", equal to Rep so Out of the Fight - in this case, just as good. Four sets of dice were rolled - game over. Facing a Gunslinger head on is bad news. Here's to Bushwhacking!

Look for a Range War supplement in the next couple of months. 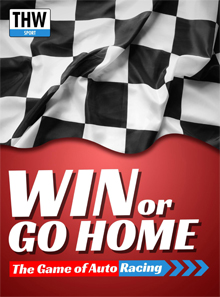 Even though it is about auto racing, Win or Go Home (WoGH) still uses many of the same mechanisms as other THW games.  What is different about them is that those other THW mechanisms have been stripped down to their bare essentials.  After all, a game about car racing needs to move fast.  The idea is that after a few minutes, the rules themselves sort of ‘disappear’ into the background, letting the players concentrate on the strategy of getting their ride to the winner’s circle.  With that in mind, let’s take a look at just how the game works.
We’ll start with just four cars, which are pictured below.  These are the resin cars that are sold as an add-on to the rules, just like the resin chariots for Charioteer.  They are a little cooler than the counters provided in the game, but are not required for play.  You can use the counters provided, the resin cars in the photo, or die-cast cars. 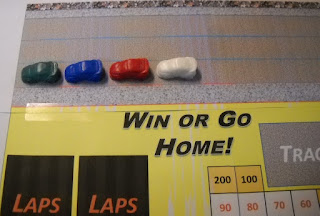 The turn sequence in WoGH looks long, but goes pretty quick.  Anytime you roll dice during a turn, you are looking for successes. A success is 1, 2 or 3 on each of the dice you are rolling.  Compare your successes to your opponent’s, and the person with the most successes is, well, successful.
A turn consists of seven steps.  They are:
1. Turn Lap Card –Adjust the Lap Tracker.
2. Turn Track Card (last turn of game is always straightaway)
3. Pit (Straightaway only), Pass or Draft
4. Random Events
5. Passing
6. Reset Pack
7. Exit Pits
Steps 1 and 2 are pretty self-explanatory, so let’s skip to step 3.  Starting with the lead car in the pack, every player decides if his car is going to go into the Pits (although only on a straightaway card) to repair damage and gain more Bonus Dice (BD), try to Pass the car(s) ahead of him, or Draft the car ahead of him. 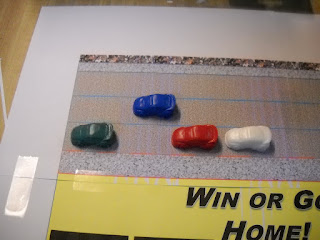 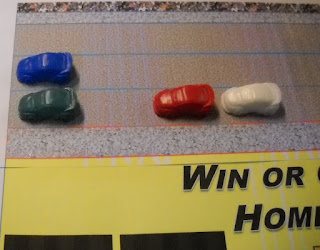 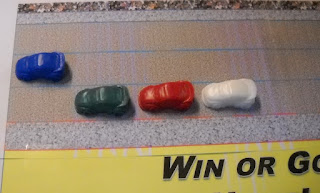 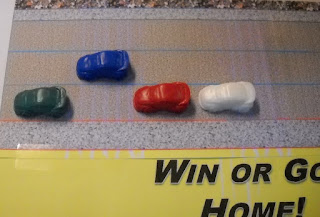 With that in mind, let’s look at the beginning and end of a race.  Just to keep things simple, all of our drivers will have skills of 3, and the race will be 150 laps.  The first lap of the race is how we set the pack.  To do that, each driver rolls against the Straight skill (all drivers have three skills: Straights, Turns, and Savvy) and adds however many Bonus Dice he wants to use (each car starts with 6).  Everyone is considered to be making this roll simultaneously, so the order of cars doesn’t matter. 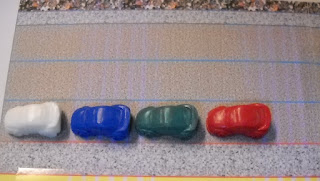 The first lap card is turned, and 5 laps have gone by.  That means there are 145 to go, and the race is in a turn. 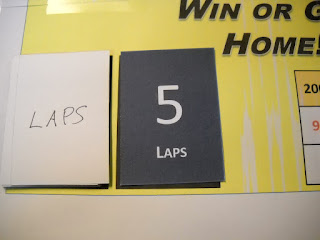 Now we roll Random Events for each car.  White gets a BD, Blue gets no effect, and both Green and Red gain BDs.  Blue decides to try and pass, while Green and Red stay where they are.  Blue gets no successes!  White rolls his 3 Turn skill dice plus and extra for being on the inside lane.  He gets 2 successes and easily holds Blue off.  Green could now try and pass Blue on the inside, but decides not to.  The pack is reset into the inner lane.
The next lap card says 20 laps have gone by, so now we’re down to 125 laps remaining and are on a straightaway.  All random events are “no effect” this time.  Blue decides to draft White, which lets him pick up a BD, for a total of 1.  Now it’s time for Green AND Red to make their move on Blue. 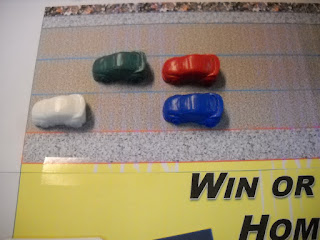 10 more laps go down, and now Green makes his move on White.  This time though, they both roll the same number of successes.  That means no one wants to give in, and now things go to the Trading Paint table.  This is where Savvy comes into play.  Both cars roll their Savvy score and however many BD they wish to use.  Once again, both sides roll the same amount of successes and Green drops back to his original position.  If one car had scored more successes, it would have taken the spot and the loser would roll on the Out Of Control Table.  That table requires a Savvy roll and ALL of your Bonus Dice.
The race goes on, and finally we are down to the last lap.  The pack order looks like this: 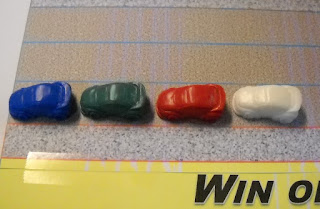 Blue has 2 BD left, Green has 1, Red has 3 and White has 3.  Once again the random events are all no effect, and since it is the last lap, everybody who can pulls out to pass: 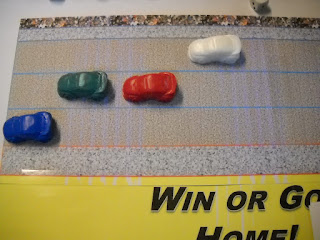 Hmmmm.  Looks like Red will be happy with either a second or third place finish, depending on how well Green does in front of him.  White, however, sees a chance to take it all.  Three wide coming for the checkered flag!  This is racing!  Green pulls up, and throws in his one BD; after all, he has to get by Blue.  Green rolls 1,3,5 [3] for 3 successes.  Blue goes all in with both BD along with his inside lane bonus to get 6 dice rolling.  Blue rolls 1,2,4,5 [5,6] for only 2 successes.  Green takes the lead and Red makes his move! 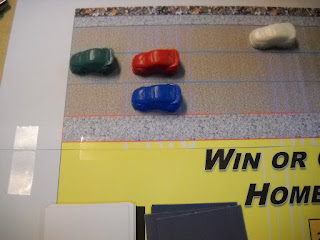 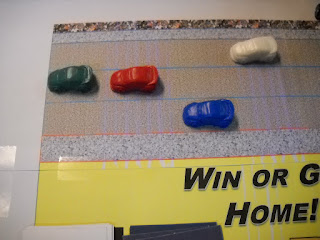 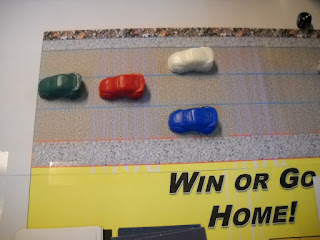 But note that White is all the way in the outside lane.  This is what we call in WoGH a Wide Pass.  White is going to lose 1D6 for being so far up the track.  However, he wins any ties without going to the Trading Paint table, as the two cars are not right next to each other.  Even if both cars get no successes, White will still advance.
White has 3 BD left.  Does he use them all to get around Blue, or try and ration them?  White decides to only use 1 BD, and keep the rest for the other passes he’s sure are coming up.  White rolls 6,6 [5] for zero successes.  However, if Blue gets zero White still makes the pass.  Blue rolls his 3 dice plus the inside lane bonus and gets 3,3,3,3.  He holds off White and takes third place.  The race finishes looking like this: 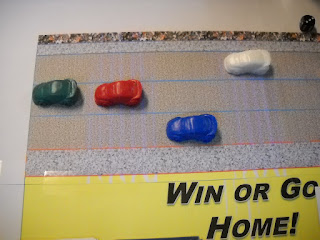 That, in a nutshell is how to play Win or Go Home!  We didn’t talk about pit stops, yellow flags, or what happens when you get to the Out of Control Table.

Remember, as Dale Earnhardt, Senior once said, “You win some, you lose some and you wreck some.”  Just because you didn’t see it in this race report doesn’t mean it can’t happen.  We can look at some of those other things in a second installment.