The Orignals - An After the Horsemen AAR

“T” and the rest looked down from the crest of the hill and the cluster of buildings.
“What do you think it was?” Big Red asked.
“Not sure,” he replied. “Looks like military to me.”
“I think I saw something move down there,” Annie said as she continued to work her binoculars over the area.
“What do you think?” Walter asked to no one in particular.
“Let’s party,” replied Big Red.
The four survivors made their way slowly and quietly down the hill.
**************************
This is an AAR of a recent play test of After the Horsemen, the Post Apocalypse game from Two Hour Wargames. I’m just about done with the tactical rules and I’m putting together the campaign rules so thought I’d bring out some old friends.
Many years ago I produced a line of 15mm zombies and hunters for All Things Zombie. Eventually I realized that I didn’t want to be in the miniatures business so sold them off to Mike at Rebel Minis. The four hunters were sculpted by Rod Campbell of Highlander Studios who has done additional work for THW products as well. Here’s a picture of the Originals as they appear in my collection. 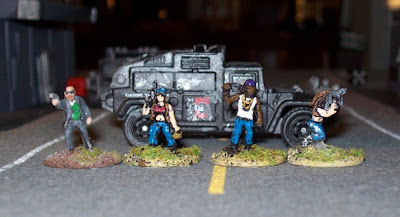 The Originals are a band of Pack Wolves led by Walter.

I wanted to do an Explore Encounter so laid out a military looking complex with a very low Encounter Rating of 1. This meant that the chance of running into anything would be low and a bit higher when searching buildings. The downside is that there was a greater chance of meeting hostile survivors. 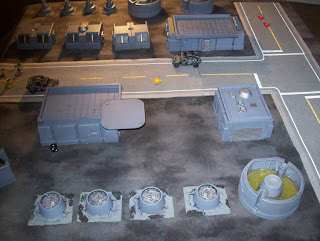 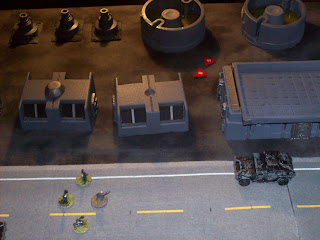 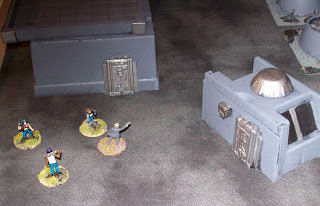 ************************************
“Crap,” Big Red said after a few minutes. “Nothing in here worth a crap.”
“Let’s go,” Walter said. The Originals went around behind the large building and systematically made their way down the right side of the street. Each time they reached a building they alternated who would go inside. Annie and Walter found some useable food in one of the buildings. They came across four circular concrete structures which appeared to be giant fans. 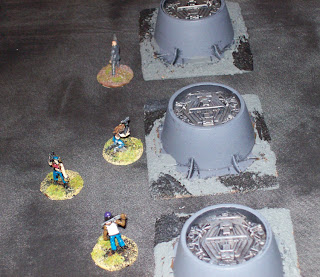 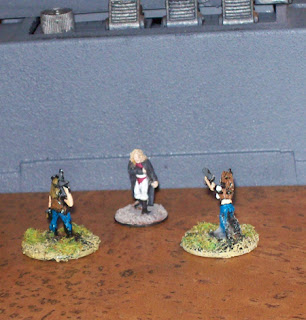 A quick People Challenge and Billy scored better. That meant the two groups could exchange info, barter for items, and part amicably. As I was playing it from the Originals side and Billy was an NPC in that case, Billy, as a Lone Wolf had no chance of joining the Pack Wolves. I considered the building to have been searched.
***********************************
Part Two - Coming soon!
Where confusion reigns and things change in a matter of second.