For the first part check out the Part One

When we left off the Dwarfs had just been denied access to the barge and it was time for "the hard way". 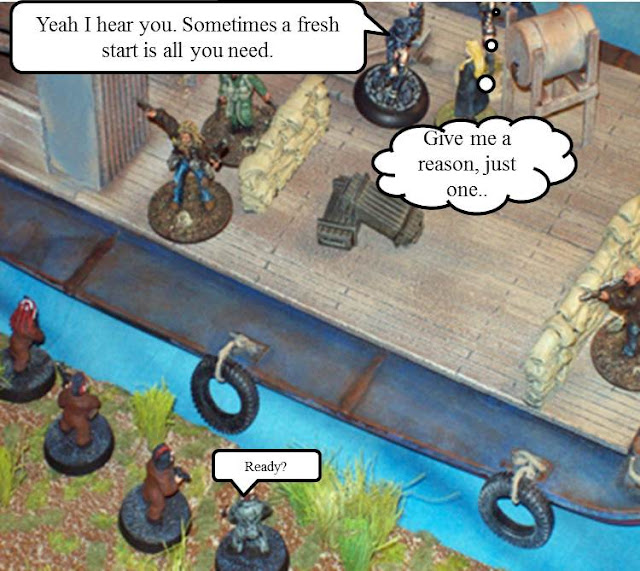 Time for the In Sight test. 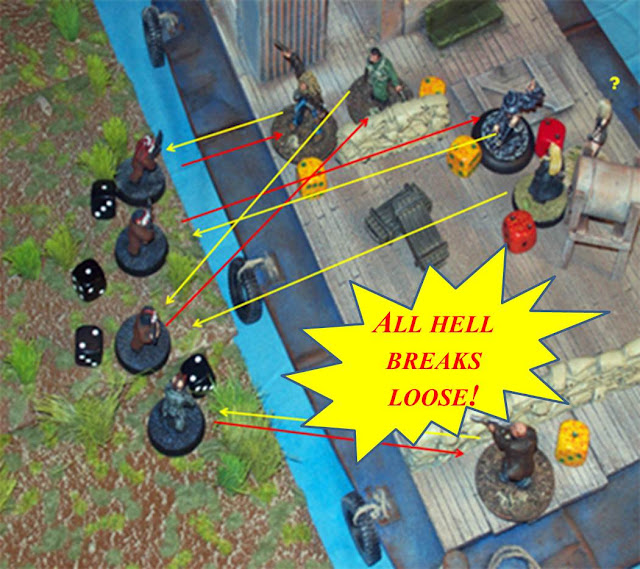 Each figure takes the In Sight test and  rolls 1d6 per level of Rep and modified. The number of successes are placed on a face up d6 face up. Once the order of action is figured out targets are selected. The targets are picked starting with the closest and when all have been targeted then you can double up on the same target. The red lines show who the Dwarfs targeted and the yellow show who the opponents targeted.  Note that Carolee has a "?" mark as I decided to hold her back to "clean up". You'll see what I mean.

As the two sides were interacting before they decided to fire,  each took a -1d6 penalty on their In Sight rolls, resulting in some pretty low scores. This represents the characters firing on the fly and not on command. 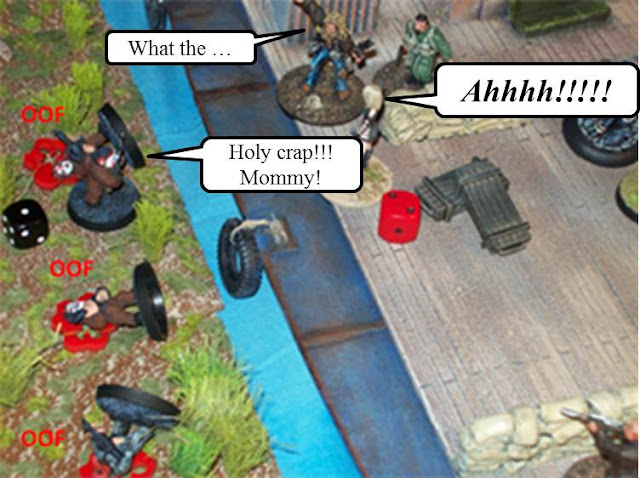 Looking at the above picture gives you a pretty clear idea of what happened. Three of the four Dwarfs went Out of the Fight when all the "2" action characters from both sides had finished firing.  The Dwarfs shot terrible and didn't hit anyone.

Carolee could now act, she was the last "2" to go. I wanted her to charge any of the remaining targets, if their were any, in case some of the Dwarfs didn't get hit by gunfire.  As she went before the Dwarf with the "1" In Sight she could charge before he shot. However, he still had a chance based on the Charge into Melee results but being a Lone Wolf gave Carolee a third d6.

Rolling on the Charge into Melee Test she passed 3d6 (Rep 5) and the target passed 1d6 (Rep 3). Target may not fire, charge into melee, no Reaction Tests taken. 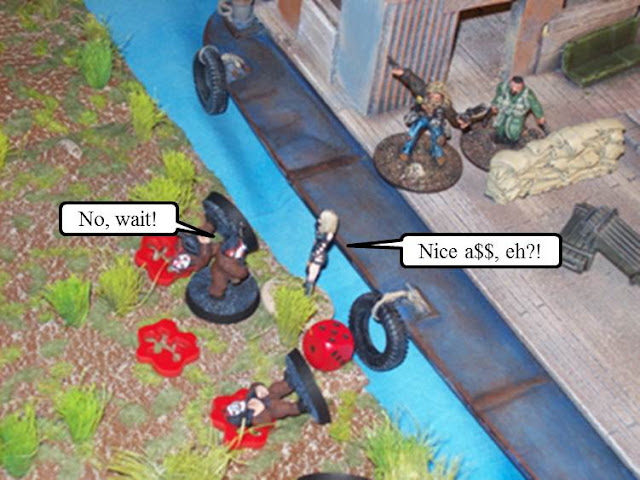 Carolee charges the Dwarf and both roll melee dice. Carolee scored 5 successes and the Dwarf "0". 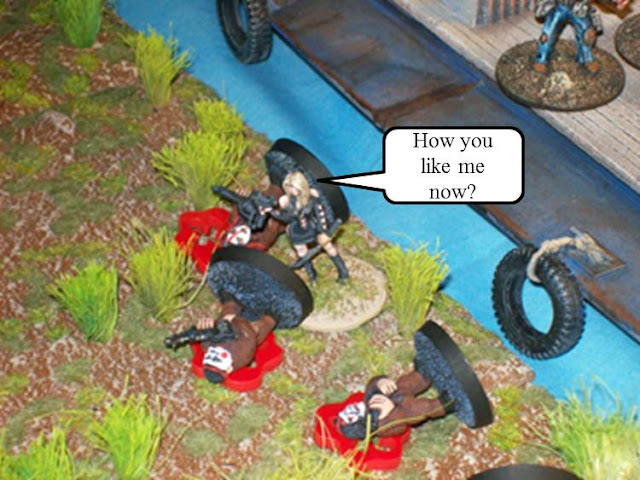 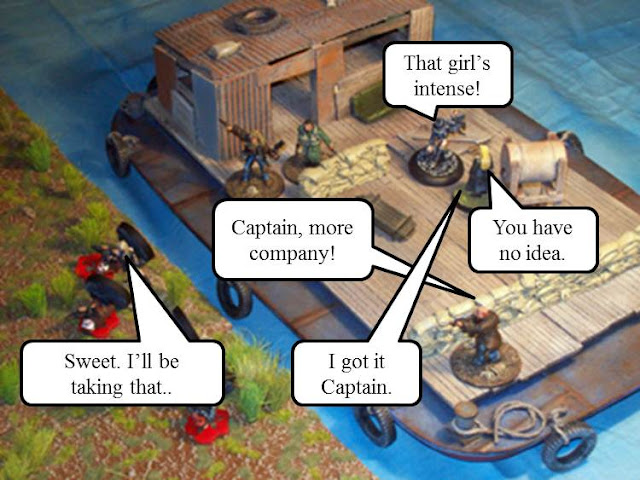 Activation was rolled and the winners moved first. 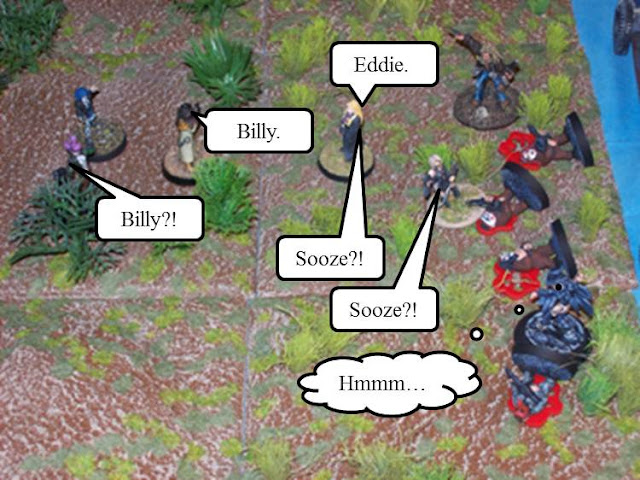 After they moved to the OOF Dwarfs the remaining PEF activated and moved to the barge. While the winners looted the losers I rolled for the PEF Resolution and came up with 3 Neutrals. I had already generated the NPCs and placed them on the table. Then I realized which group had shown up.

Fast Eddie, Amber, and Sooze. All three have history with Billy Pink from previous AARs, some a more personal history than the others (oooo, there's a unforeseen storyline).

A quick People Challenge was taken and the three could book passage south on the barge. This was perfect for the Captain as he had a full barge with 6 paying customers. He received 6 Items (the economy used in ATH). He kept have, Q and Bob each got one, and the remaining one went into the spoils to be split at a later time. All of the characters that OOF a Dwarf could loot whatever Items they were carrying. This was easy to figure out as there are over 100 pre-generated NPCs in ATH. All the work is done for you.

I still have to roll for what happened to the Dwarfs and will do so on the At the Mercy Table. They will have to check versus the People Skill of the Captain as they tried to steal the barge. More on that later.

As the barge gets ready to sail down river with its six passengers I think this will be a good time to try out Red Sand Brown Sky, the free PA Gladiator add-on to Red Sand, Black Moon and Red Sand, Blue Sky.

Maybe Sooze and Carolee can try the optional Punch Your Lights Out rules?

Posted by Ed the THW Guy at 15:19
Email ThisBlogThis!Share to TwitterShare to FacebookShare to Pinterest
Labels: AARs, After the Horsemen, Billy Pink, CR 3.0, Two Hour Wargames