ATH AAR - "Punch your lights out!" 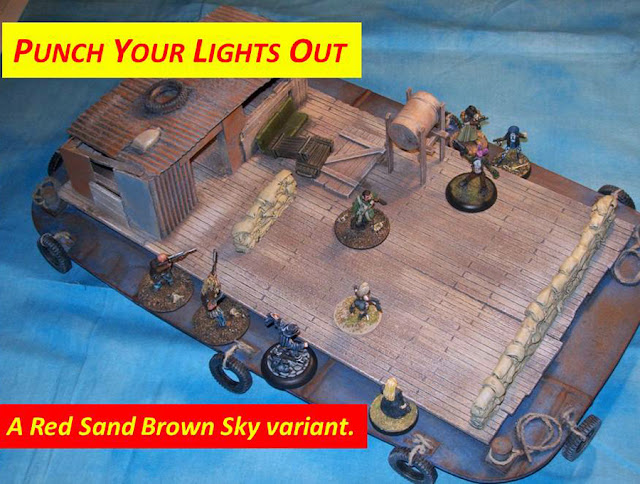 **********************************
When we last left the deck of El De Barge Billy Pink and Carolee were heading south towards Havasu. Also on board were Fast Eddie, Sooze, and Amber. For those who may not know it Sooze and Billy go way back and have had many an adventure together. Anyway this led to that and just before docking Carolee and Sooze have decided to "settle things". A perfect excuse to try the Punch Your Lights Out non-lethal combat option in Red Sand Brown Sky.
All rules, unless specified otherwise, come from RSBM. Here are the stats for each girl.

Early bets had the smart money on Carolee, but not by much. Carolee has the greater Strength and just needs to land one or two solid blows. In Red Sand Brown Sky all Leg hits become Head hits and all Arm hits become No Damage.

So like the man says, "Are you ready to rumble?!" 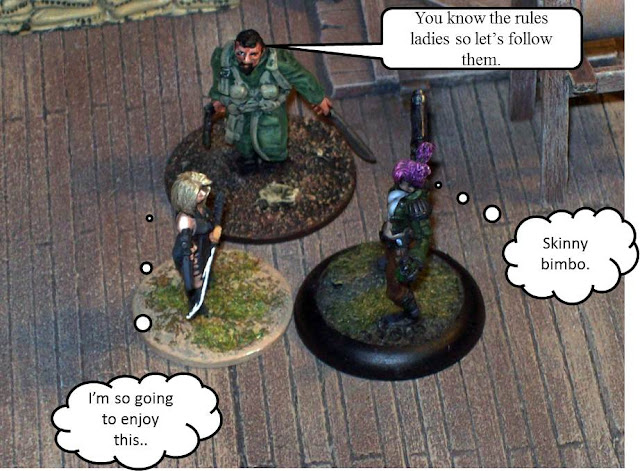 The barge is divided into sections like the arena in RSBM. Sooze gains the center and Carolee steps up and the fight begins. 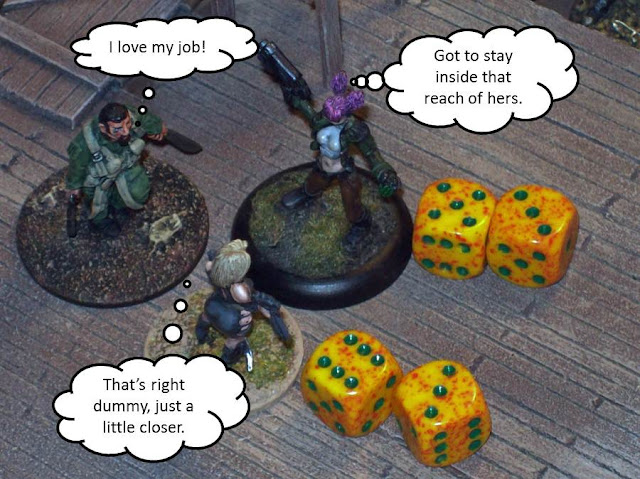 There's a few changes in the rules. No weapons allowed, no AC used and the Attributes in After the Horsemen convert into Signatures from Red Sand Black Moon. Carolee wins the maneuver by 1 and the girls go to the Attack Table. 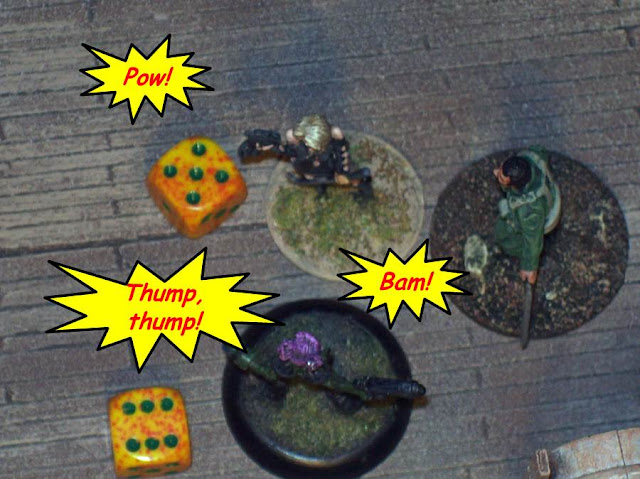 On the Attack Sooze wins by one causing an immediate re-taking of the test. 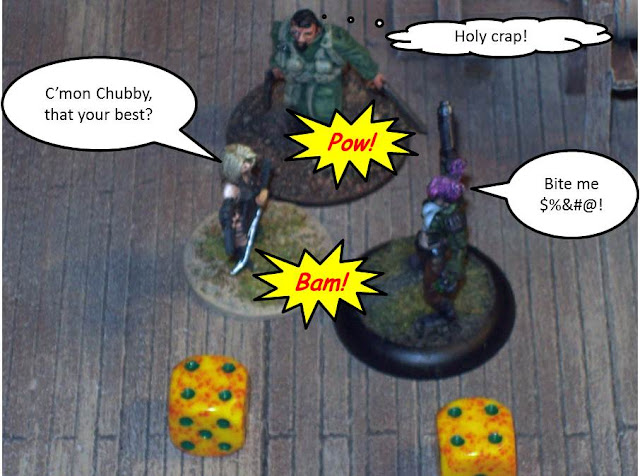 This favors Carolee as she has the Brawler Attribute and gains a +1d6 when re-taking the test. Sooze is Tough so has 3 extra Bonus Dice but Carolee has higher total Attributes so starts with more Bonus Dice. The girls score even and separate but the re-taking of the test burns Bonus Dice at a rapid pace. 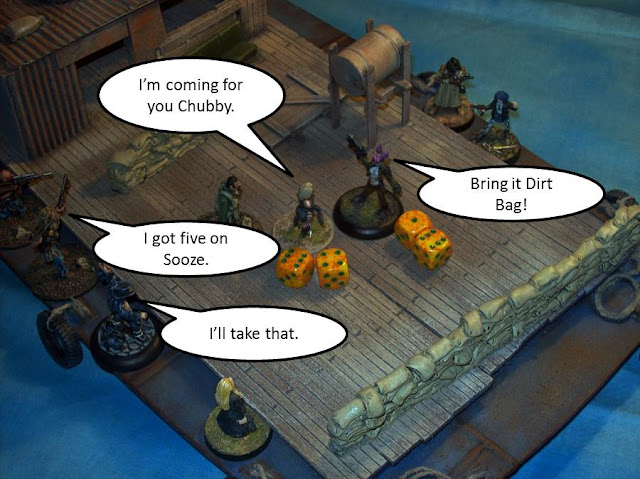 Carolee continues the fight and scores higher on the maneuver, gaining the unshielded side. For this variant not a big deal. 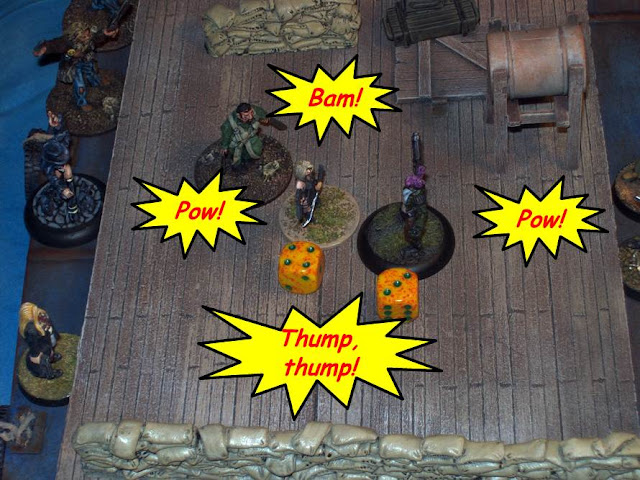 On the attack Carolee scores one success more. Re-take the Attack Test, Sooze's is almost out of Bonus Dice! Carolee uses 2 Bonus Dice and Sooze none. She's running out of gas. 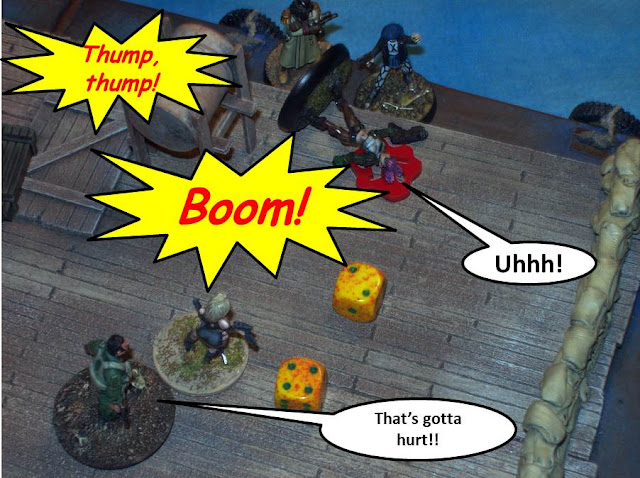 Carolee wins the Attack Test by 2 successes more and scores a hit. A 2d6 roll signified a hit to the body (chest) then...Boom! Rolling 5d6 for Strength she scores 4 successes! This converts to two body shots and a punch to the face causing a bloody nose and knockout. 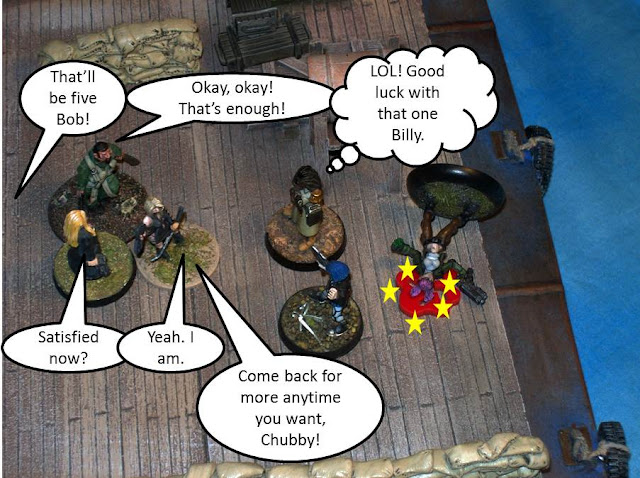 I thought Carolee was going to win but there were a couple of times Sooze could have done some damage but always seemed to come up one success short. The Brawler Attribute gave Carolee the advantage when they re-took the Attack test and eventually paid off.
This little game does wonders to advance the storyline for future After the Horsemen adventures.

The Red Sand Brown Sky supplement is a great bridge between After the Horsemen and Red Sand Black Moon and allows players to get more mileage from their characters by crossing them over from rule set to rule set.