Just got a great scratch built barge from Garren Allard and have to make it a focal point of my ATH games. So here we go.

***************************************************
The pictures will help explain what happens as we go along and I will add game mechanics and commentary where needed.
I set up the barge on the water and decided that it would be crewed by three Pack Wolves. There are three types of characters in ATH, Sheeps, Pack Wolves and Lone Wolves. Each has their own QRS and goals/abilities. I decided to make these recurring characters.
Captain - Rep 5 Co-Star Machete and BAP
Q - Rep 4 Bolt Action Rifle w/Scope
Bob - Rep 4 Sawed off Shotgun and Big Knife
ATH is NOT a wargame as much as a story telling vehicle. Yes, you can fight a ten man skirmish and it's great for reflecting ranged combat but ATH is best for building the stories of your characters.   And not only your Star but others as well, like the crew of El De Barge.

Our first adventure brings with some characters from a previous Bat Rep. 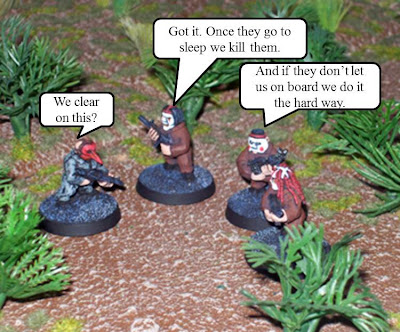 I started the game with El De Barge on the water and three PEFs. PEF stands for Possible Enemy Forces and could be enemies, friends, neutrals or even nothing at all. This allows you to play a game without prior knowledge of what you might face!

I moved the PEF towards the barge and when LOS was established rolled for resolution. The result was 4 Pack Wolf enemies. But what was the purpose of the dwarfs? Why were they there? I decided that they would attempt to hijack the barge. Now I could have just had them open fire, In Sight etc. but I wanted more. First off only one guy was In Sight and if they started shooting it would be a tough fight. Better to wait until they go to sleep and slit their throats. yes, the dwarfs are not the good guys and neither was the clown. But it makes a good back story, a reason why. 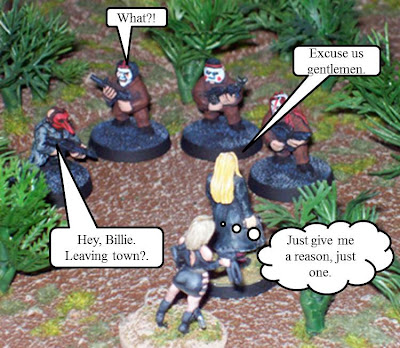 The next PEF activated and moved towards the barge. As soon as it came in LOS of the Dwarfs it was resolved and got a result of Lone Wolfs, Neutrals. Billy Pink and Carolee. I set them up as per the rules 3" to 6" and LOS of each other, rolled an Interaction and scored a result of exchange pleasantries. This I took as Billy and Carolee acknowledging them and passing by on the way to the barge. I had decided that the barge sold passage down the Colorado River which I took as south of the Settlement where the Clown fight happened. I figured that to be Laughlin NV and the next stop south would be Lake Havasu. Carrying on the story Billy and Carolee were heading south and wanted to catch a ride on El De Barge. 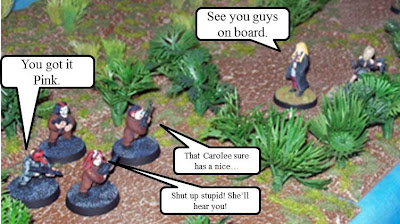 Now there were three groups on the table. I decided to run the Dwarfs and Billy as one side for movement as it made more sense. Billy moved first and made it to El De Barge. 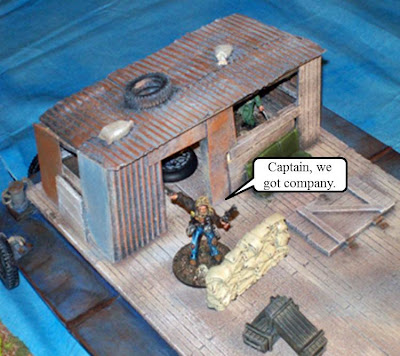 Once they came into LOS this tipped off the crew. As their job was to sell rides down south I figured they would not start out as aggressive. 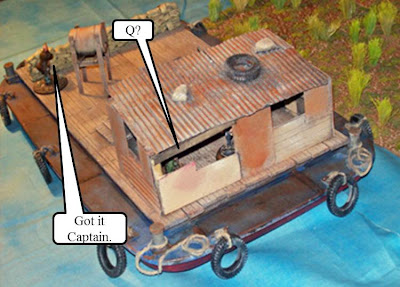 But they also weren't stupid. The Captain was in the wheelhouse with another passenger and he sent Q to take up position in cover at the front of the barge.
I rolled for the NPC passenger inside and scored a result of move outside the building, wheelhouse. 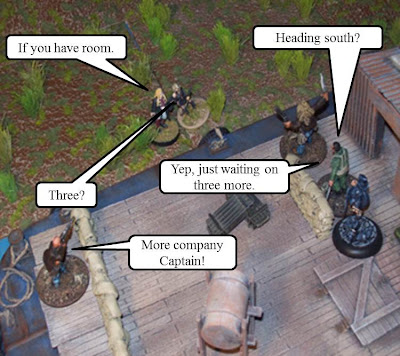 Now would be time to discuss passage so when Interacting all figures are to be within 3" to 6" and in cover. Interacting is done by taking a People Challenge between the Leaders of each group. This would be between Billy and the Captain. You have to determine what is success and what is a failure. This was easy. A success meant that they would buy passage on the barge while a failure meant no room. Billy succeeded so was allowed board.

I had decided that if I were the Captain of the barge I'd be concerned with someone trying to pirate my ship. So I set out some guidelines that I will follow in future games. One was the maximum number of passengers would be twice that of the crew, or in this case 6. So far there were three and still one PEF out there plus the dwarfs.

BTW- I recommend keeping track of any Settlements you roll up, NPCs. and other things for two reasons. First it will be easier when you need them in the future and can be modified to fit instead of built from scratch. Second, you can re-use the NPCs and create a living area to play in. There are over 100 pre-generated NPCs in ATH but if you can match figures with stats early it makes it easier. Also you can use recurring NPCs if needed. I have 50 plus figures stated out and reuse them as much as possible. I even use them when resolving PEFs and have them grouped into packs or gangs. For example Billy Pink and Carolee Lee are paired as two Lone Wolves, the largest Lone Wolf group allowed. 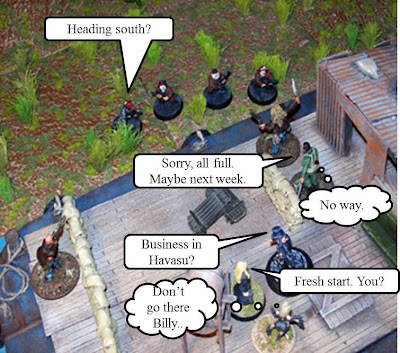 After Billy and Carolee were aboard the Dwarfs moved next. Remember, they were already resolved as enemies but I chose to set them up as Neutrals to gain passage. Once on board I would do a second Encounter where they would try and take over the ship when the crew were sleeping.

FYI - there are rules in ATH for Lack of Sleep and the benefits of keeping watch at night. Anyway, for them to get on the barge they would have to pass a People Challenge. I set up the same success and failure as when Billy tried to get on.

Let's just say that Pinocchio the Dwarf doesn't have great people skills. The Captain said no.

I counted the fact that if he had said yes that would have put them over the self-imposed rule of six passengers so the Dwarf was at an additional -1 to his People Skill for the Challenge.

Note that each character is has a Rep plus three Skills:
Fitness - Taken versus Physical Challenges.
People - Taken when interacting with NPCs via a People Challenge.
Savvy - Overall smarts and used when taking a Savvy Challenge. 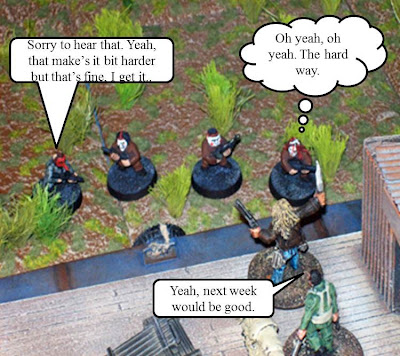 Many times when I set up an Encounter I have no idea where it will go. Some like a Raid or Robbery are pretty well defined but this type, called Chillin' when characters interact with each other are loose cannons.

Maybe the barge would be attacked by waterborne pirates, maybe he would book up to six passengers from the PEFs, and make some money (called Items in ATH). I really had no idea how this was going to go at the start, all I did know is I had a barge, with three crew and what was their job. Playing a campaign gives reasons behind the games and for me is much  more entertaining. Anyway, the game was taking a critical turn...

I decided to end the game at this point. It had taken twenty minutes including writing notes and taking pictures. Sometimes I take pictures and nothing happens but this one would be different.