Vehicles in After the Horsemen - Machinas - Part Two

Somewhere along the Arizona/California border in the former US of A.


"Dude, I still can't believe we got this car!"

Frank couldn't stop smiling since he stole the car from those clowns in Bullhead. Gangers, yeah right. More like wannabees. Wait 'til he got back to Oatman  and showed them what he'd done. Can't wait!

"Dude, take a look in the mirror! We got company!"
***********************************************
This is a play test for After the Horsemen using the upcoming Machinas rules. In this case we have two small time Pack Wolves from ATH who have stolen a car, sedan, from a rival gang. Here's how everything was generated.
The objective is simple. The Blue car (the thieves) must outrun or destroy the Red, Green and Yellow vehicles that are chasing them.
Rolling on the Who's Chasing Table we see the enemies ar Pack Wolves. This helped to set the story. I have them trying to recover the Blue car but it could just as easily been a random road encounter with robbery as the motive.
Next I roll for How Many. Adding the Encounter Rating (odds of running into anyone in the wasteland) to a 1d6 roll I come up with 7. That means there's three vehicles chasing.
I choose a sedan, a pickup, and a modified dump truck (RV class). I could have rolled these up at random but wanted to use the vehicles I already had.

In Machinas all the vehicles stay in close proximity to each other. This group is called the pack. The pack, all vehicles, move from one road section to the next. This continues until the chase ends or one side or the other is destroyed.

The last thing to do is to set up the road. I roll for the first two sections. This way the pack will always be on one section and can see the next upcoming section to plot their strategy. In this case I roll two left hand curving sections.

I place the Blue car in the front then the three chasing vehicles in a random manner. The stats for each vehicle and driver have already been generated from ATH. In Machinas Rep from ATH converts to Savvy and the other Attributes, Tech and Speed, are generated by dice rolling.

Here's what it looks like at the start of Turn One. The Blue car is first then the Red. Green and Yellow chasers.
The first phase of Machinas is the Challenge Phase. In this phase the chase cars can choose to stay behind the car in front of it (called being out of position) and pick up one Bonus Dice to be used during the race, or they can move to one side or the other of the car in front of it (being in position) and attempt to pass. In this case the Red car moved into position while the Green and Yellow choose to draft, picking up one Bonus Die each.

In the following picture we see the Red car trying to pass the Blue. If he is successful he can choose to pass him or in this case shoot or bash him. Each car rolls d6 equal to their Savvy, Bonus Dice, and any other modifiers that may apply. The dice are rolling and we are looking for successes (1,2, or 3). 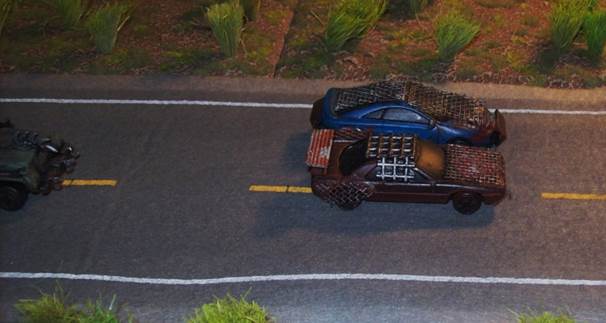 Each car/vehicle has four ways to customize them. The driver has a Signature, the car has a Feature, and there are Weapons and defensive Measures that can be added. These were drawn at random from the Machinas  deck (players in the game use these to build their vehicles the way they want them).

Before the passing attempt I looked at these items for both vehicles. Holy crap! The red vehicle was armed with a grenade launcher while the Blue car had spiked wheels, good for Bashing. As the blue car won it tried to bash but was unsuccessful. The red car was forced back but no other damage occurred.

After the Challenge Phase each vehicle, from front to back and one at a time rolls 2d6 for a Random Event. This happens a bit less than half the time and can be good (gain a Bonus Die or similar) or bad, as in this case.
The Red car rolled that the vehicle behind him was too close and there was a chance that one or both fo the vehicles would go out of control! Both needed to roll d6 equal to Tech and add any Bonus Dice. When to use Bonus Dice for Non-Player Drivers are generated randomly and in this case it meant that any used would be wasted. In any case, both cars passed their control test and the chase continued.

The Red car moved up again and the Blue car, again, won the pass. but as the red car was two lanes over Blue could only shoot or force Red back. having seen the grenade launcher Blue chose to force Red back and trust that he could outrun the Pack Wolves.
Then he saw the Yellow truck making it's move!

Part Three
Posted by Ed the THW Guy at 23:51
Email ThisBlogThis!Share to TwitterShare to FacebookShare to Pinterest
Labels: AARs, After the Horsemen, Machinas, Two Hour Wargames