Here's the follow up to Part One. I decided to use the 5150 Paper Warriors figures for this one. 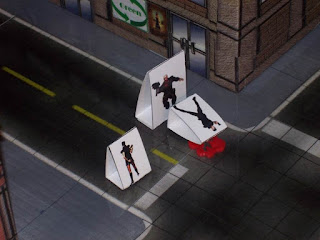 The Grath resolves the first PEF as two cops. In Sights are taken and the Grath goes first. He charges into melee. The cop fires and scores a hit on the chest, but as the Grath has the Brick Wall Attribute only an Obviously Dead result to the Head will kill him. The melee is short as the cop goes Out of the Fight. The other cop takes the Man Down and retires into the next section of the table. 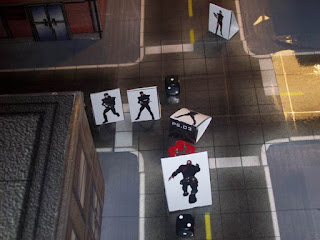 The second PEF comes into sight and is two more cops. In Sight is taken and the Grath goes first again. Charging into melee the cop fires in defense but misses. 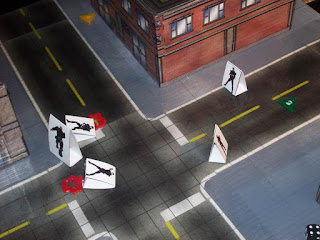 The melee results are the same, the cop going Out of the Fight and the second cop retiring away. 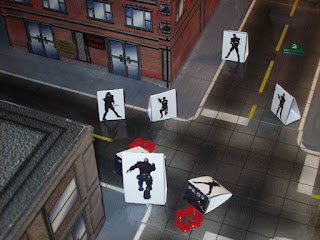 The third PEF is resolved as 2 more cops. I pre-loaded the PEFs with pairs of cops and one "hunter". So far no luck on the "hunter". The cops open fire and score a head hit and arm hit. But the head hit results in a knock down, which the Grath ignores. 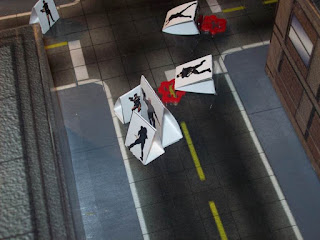 The Grath charges into melee again. Why doesn't he shoot? Because the better option for the Grath is to charge into melee. May times the target is subject o the Fear that the Grath projects so often will not shoot and takes a -1d6 penalty in melee against the Grath. 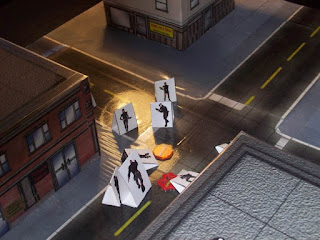 One cop scores a result of Evenly Matched. This gives any other character in melee a +1d6, So the brave cop charges into melee and is beat senseless...stunned.
On the Grath turn he finishes off the evenly matched cop, a result of Obviously Dead. 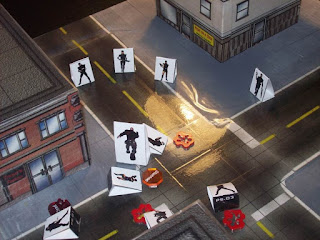 The cops activate and the three cops that have retired open up on the Grath. Two assault rifles and a BAP provide 6 hits!  No effect. 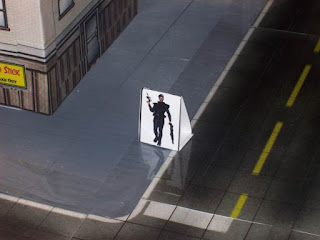 Okay so I've resolved three of the four PEfs. The last one has to be the "hunter", in this case Malcolm Ingham. The 4th PEF moves into sight and is resolved. Show time! 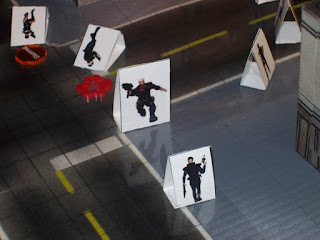 The PEF is within 6" and the In Sight is resolved. The Grath will go first and charges into melee. The test is taken and both sides pass the same number of d6. Malcolm fires his BAP and rolls a "6" and "4". Being a Rep 5 that's a 9 (hit) and an 11, hit to the desired visible body part!

There's two head hit locations on the Hit Location Table. Snake eyes  (2) is head and OD regardless of Impact. The other is 3, which gives a Knock Down to Impact 1 and 2 weapons (BAP) and OD otherwise.
When there are two locations that are the same you roll 1d6. On a score of a 1-3 you use the row farthest from "7". On a 4-6 you use the one closest to "7". Bottom line it comes down to a 1d6 roll. 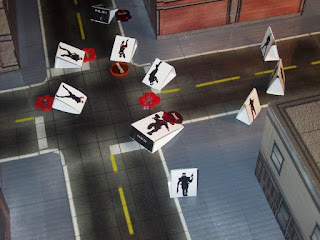