Lake Havasu AZ is home to many water activities. Most are serene and easy going but every spring  the  big boys come out to play. 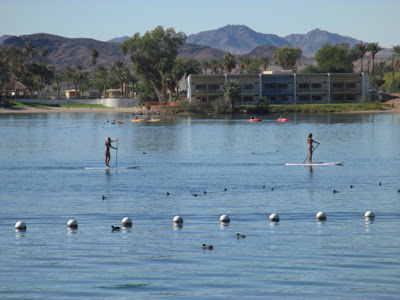 So that's the back ground now let's go to the next Heat, B-1. This is the first Preliminary Race for the B Section. The B Section, by luck of the draw, consisted of lesser quality drivers than A Section. This would prove to be disastrous.

The boats fly off the line and shake out in the following order. Yellow has blown almost all of its Bonus Dice, added at various times during the race to increase your chance of success, and slides into second. Why mention this? Because Yellow and Blue/White drives are sub-par with Savvy's of 2 and 1 while all the other drivers are 3 or 4. They'll depend on their Bonus Dice to handle their boats if something comes up.

The Random Event Phase for the next turn reveals the possibility that Yellow is too close to one of the boats. Rolling versus it's low Savvy and failing, results in Yellow clipping White! This causes light damage to it's hull (reduces it's Tech rating by 1) and it drops back one spot.

White regains control and continues on while Blue/White sees a chance to take advantage of Yellow's misfortune and slips into third.

Going into the first turn White overtakes Black. Next turn Black slips out wide in hopes of catching White while Yellow and Blue/White are content to draft Black and gain Bonus Dice.

But it all goes to heck! Black rolls a Random Event (this phase happens every turn) and takes a hard bounce landing right onto Yellow who loses control and goes airborne.

Black tries to regain control but can't and flips as well.

Blue/White dodges both wrecks but at the cost of it's remaining Bonus Dice and hull damage (reducing Tech to 1 from 2). The race is halted as the wreckage is cleared with the drivers whisked away for medical treatment.

Right out of the chute Blue/White loses control and rear ends the Blue boat.

It's turn 5 and three boats have been lost. 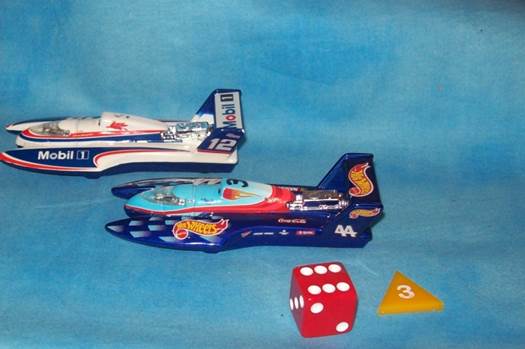 Feeling snake bitten the two boats cruise the rest of the race. No surprise that the better boat and driver between the two (White) wins with Blue's final attempt to pass being held off.