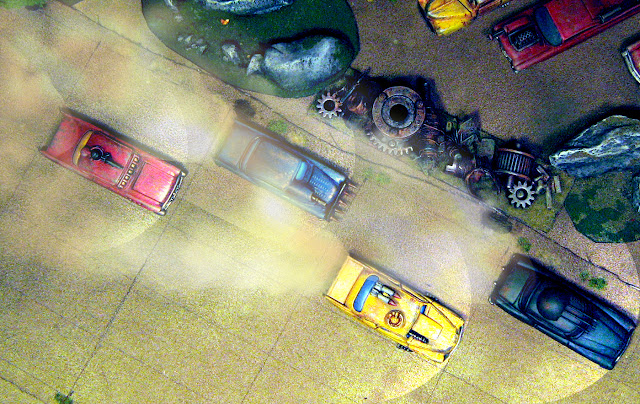 After the first lap, the order is Green, Yellow, Blue and Red. Green and Red  have suffered some minor damage but are very much still in the race. 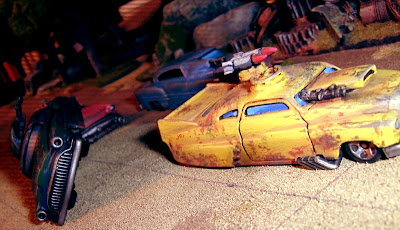 Closing in on the near turn, Green's engine stutters and misfires distracting the Brother Pilot enough that he loses control of his car. He swerves directly into Yellow's path and the two cars collide! Yellow regains control of his car, moving into first place, but Green loses complete control and rolls the car several times.

The car is a total loss, and sadly, Brother Pilot is killed, his glory forever imprinted on the Acceleratus. All praise The Oppenheimer.

Entering the turn, Red, flying on momentum and adrenaline, sees an opening and takes a chance, passing Yellow for first place! Red has gone from last to first in just seconds. Yellow goes for the immediate pass to try to regain the lead. Red sees the attempt and grinds his fenders into Yellow who is forced to brake so hard that he send himself into the path of Blue. Yellow and Blue collide, but they are able to keep control and continue racing.

On the back straightaway, all the cars are content with maintaining the order. Yellow knows he is stronger on the turns than Red and sets up to pass as they fly into the far turn. Yellow easily swings around Red, who drops back, blocking any pass attempt by Blue.

As they leave the turn, Red's brakes lock up - his luck completely reversed, he is again sent back into last place. Blue is now set up for, and tries for a wide pass of Yellow. Yellow instead lines up his guns and fires away at Blue. But Blue is an excellent shot and riddles Yellow from stem to stern. Yellow is forced to swerve out of the line of fire and loses first place in the process. Whereas Red had the luck and momentum at the beginning of the lap, the luck went to Blue at the end of the lap, as he goes from last to first.

Finishing Lap 2, the order is Blue, Yellow and Red. One car and pilot has been lost, but the other vehicles, despite the bumping and bashing haven't sustained much permanent damage.