Lap 2 saw fortunes shift between Red and Blue, and the loss of the Green car and its driver. The order coming across the start/finish stands at Blue, Yellow and Red.

Heading toward the near turn, Yellow drafts Blue, while Red sets up to the outside. Blue's engine misfires, his car stutters and starts to drop back. Blue recovers, but Yellow, in a panic to get out of Blue's way, brakes too hard and drops back into last place allowing Red a free advance to second. 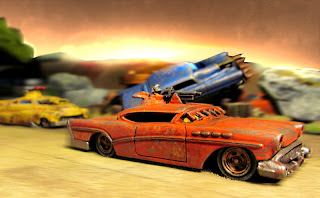 Red hopes to capitalize on his luck and sides up along Blue to contend for the lead. Blue rams Red but turns his wheel too hard -- Blue rolls his car off the track and out of the race! Luckily, both car and driver survive with just dents and bruises and will be able to race again.

Into the near turn, it is no longer a race, but a dual! Red is uncomfortable in the lead, because though he has the speed to win, it's Yellow who has all the initiative to act upon. Yellow, however, knowing he's much stronger in the turns, decides to wait until the far turn to make his move. This will give him enough time to build up momentum.

Red and Yellow maintain, 1-2, all the way down the backstretch. Into the far turn, Yellow moves out and up to pass, clipping Red's rear fender. The cars swing through the gravel, bumpers matching. Yellow has superior grip and engines, but Red's driver is more talented .. and only JUST hangs on to maintain the lead! With all their momentum spent, Red and Yellow can only rely on their cars and shear luck.

Into the straightaway they come, the finish line only a few seconds away. Yellow goes for one last weak pass. Red holds on, but - wait - Instead of holding on to the lead for the sure win, Red opens up with his guns on Yellow! The spectators gasp, shocked at such a foolhardy move. But both Brother Pilots know the meaning: Red does not simply want to win on speed alone, he wants to earn the victory by bathing his car in glory. 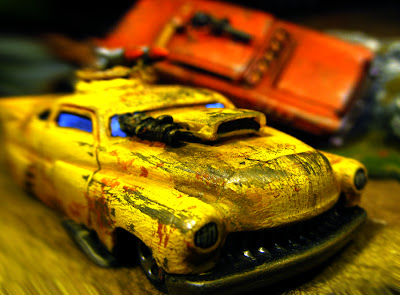 Bullets fly and metal and sparks erupt from the cars. Red's tires get shredded by the gunfire and the car is sent flying into the infield, coming to a rest on its top. Yellow comes across the finish line as victor!

Red's car is damaged but salvageable. But the driver is injured enough that he will miss the rest of the festival. Even though Yellow won the race, Machinas fans will always remember Red's final action that spoke to his devotion to the glory of the race rather than his own selfish needs to win. All praise to The Oppenheimer!

(Notes: Even though Red was in the lead which left him unable to perform any actions, there is an optional rule that allows vehicles to "pass" backward, if they, for example, want to get into a position to fire or ram cars they otherwise could not get to. I made the decision not to pass backward because it would have taken too much energy and momentum for Red to pass backward, shoot or bash and then (attempt to) return to the lead, especially with the finish line so close.

This was one of the more destructive races I've run (only one out of four cars finished!) My usual mortality rate has been about 50 percent. So keep that in mind as you build cars and drivers; you need to think about survival just as much as big guns and horsepower ... that, or just don't get too attached to any of your cars or drivers.)
Posted by Evilcartoonist at 12:22
Email ThisBlogThis!Share to TwitterShare to FacebookShare to Pinterest
Labels: AARs, Machinas, Two Hour RPGs, Two Hour Wargames