Here's a AAR inspired by the Old School 1st Edition 5150. Cover page art by the man, Tony Yates. Here's the intro to the book as it appeared back in 2006. 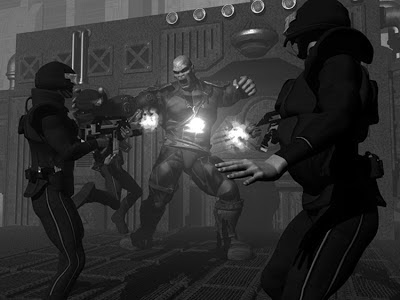 What was just another “disturbance” call had gone horribly wrong. The first officer had arrived on the scene and within seconds was dead. Back ups were called in but this wasn't some ordinary “perp”. This was a Grath. Local police weren't trained to handle this. That’s why they had called him.
“What in the name of Gaea is a Grath doing here anyway?” Malcolm thought. He flicked on his siren and accelerated through traffic.
**********
The Grath pushed his thumb through the eye socket of the screaming officer. Two others blazed away at him with their auto-guns but to no avail. The rounds embedded, no, tore through the body of the Garth but still he kept coming.
“Alien, cease and desist!” Malcolm shouted through his universal translator. He knew the Grath understood so that made this legal. “That’s an order!”
The Grath dropped the officer and smiled, red eyes ablaze. With a voice like death he replied, “I’ve been waiting for you.”
“You are subject to penal code 5150. You may choose to go quietly with me or not but in any case, you will go,” Malcolm said. “The choice is yours. As you can see, I am unarmed.” Malcolm extended his arms from his body empty palms outward.
“Your mistake “hunter”!” With lightning speed the Grath leapt towards Malcolm. Feet planted but with a slight jerk of his shoulders Malcolm twisted his body out of harm’s way causing the Grath to sail by him.
The Grath landed in a combat crouch, spun around, and…boom! His head exploded into a fine metallic mist. The Grath took a step forward then fell to the ground. The crowd that had gathered burst out in applause and cheers.
Malcolm holstered his weapon and tapped behind his right ear. “Ingham 1130. We need a bio-toxin cleanup down here. Yes, in front of the “Green” on Academy.” Malcolm listened then said. “Oh yeah, a trauma unit as well. Officer down.”
**********
That's how it went down in the book. Now let's see how it goes down using New Beginnings. Look for Part Two later this week.