Step by Step Star Navy - Part One - The Set Up 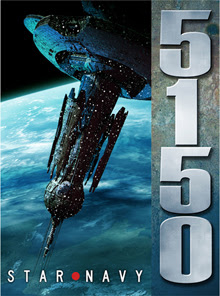 5150 Star Navy is the space fleet combat game from Two Hour Wargames. In it players are the Admiral of one Faction with the goal being to defeat an opposing Faction in numerous battles forcing them to surrender or flee. To defeat their opponent the players undertake a variety of Missions with each success bringing them closer to victory. Battles are fought with each prior battle affecting what is available to be used in the next battle. When one side has suffered enough defeats they fail their Campaign Morale Test ending the Campaign.
5150 Star Navy is designed for a large number of ships. Playing 20+ ships per person is relatively simple once the mechanics are learned. In 5150 Star Navy the player is the Admiral of a fleet and concerned with the overall battle plan, deployment and deciding when to break off the battle, if needed. The mechanics are straight forward and easy to use as the goal is to get ships, a lot of ships, on the table to fight.
In this Battle Report I used a small number of ships per side to demonstrate how the mechanics work.
***************************************

Campaign Morale – What is it good for?

Players start the Campaign by choosing which Faction they want to play. If playing solo or same you can choose your opponent or have it determined randomly by using the Going to War Table.
Once the Factions have been determined, look up their Campaign Morale.  The Campaign Morale is a number that reflects the overall morale of the Faction in the Campaign. In this Bat Rep the Gaea Prime Star Navy has a Campaign Morale of 4 while their opponents, the Zhuh-Zhuhs, are a 4 as well.

What are we fighting for?

Campaigns are fought near planets. If you own the planet you control it. If you do not, you are contesting it. You can choose how you want to do it or roll it randomly. In this Bat Rep the Zhuh-Zhuhs are controlling the planet.

Where are we fighting?

5150 Star Navy includes a simple Campaign Map that the players maneuver their fleets over. When opposing forces are in the same square, the ships are placed on the table and a battle is fought.

Before you can fight you must determine who is attacking and where the ships are placed. This is done by both sides taking the Long Range Scan Test. This represents the ability of both sides to detect the other’s presence. Each Faction has a number of d6that they will roll based on their LRS capabilities and if they are controlling or contesting the planet. The number of successes each side scores are compared and the results carried out. In this Bat rep the Zhuh-Zhuhs scored more successes so the Star Navy would be the attackers, coming in head on.
The total number of successes rolled also determines the distance between ships. Entry speeds are set and can be altered is lucky and the ships placed. A simple die roll determines who activates (moves and fires) first. In this battle the fleets started 36” apart and the Star Navy would go first.