Another major reorganization of the game room turned up these fellows: 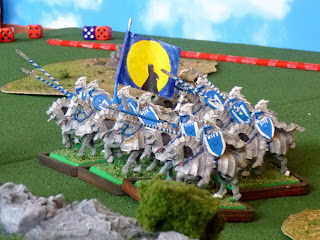 As they haven't seen the light of day for some years, and as the newly completed but very old indeed goblin wolfriders still had not seen action a scenario seed was born.

Now I am in the process of refining some ideas that govern truly irregular forces in our games. Such forces include Cossacks and guerrillas (Musket and Shako), American Indians (Comancheria) and other tribal forces (the Secret Project).

So here was an ideal chance for a quick fight between a force of heavy regular cavalry and a larger force of irregular mounted archers.

So here is the back story for those who enjoy that sort of thing: 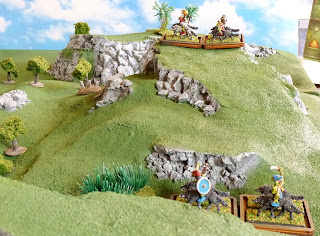 The Chosen One was pleased. When word had reached the lashkar that the pink skins were approaching in force, his followers threatened desertion. "Give me 24 hours my children, and we will see how formidable this host truly is. I shall use my power to so devastate these dogs that all you will need do is vanquish but a small remnant and loot the fallen."

That night the Chose One called on the powers of Handwavium and as the snake befuddles the mouse into senselessness so did his power lay low the forces of Altengard...all except for those bothersome knights! No matter they shall be dealt with come sun up. 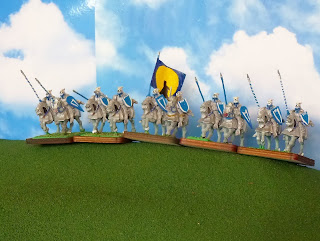 Master of the Order Singvogel was puzzled. What witchery was this that kept his footmen in a torpor despite all efforts to rouse them? Witchery that did not affect his order. Purity of heart. purity of spirit!

The green skins will fall before his riders like so much wheat to the flail.

The footmen were a useful auxiliary, nothing more. Time to deal with them once the enemy has been routed.

With that he ordered his knights to form and began the advance. 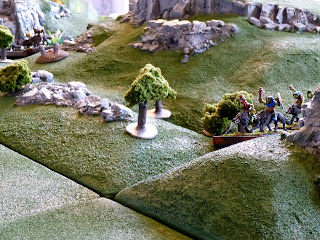 The Order was represented by one unit of 10 heavily armoured horsemen. They were all rated Rep 5 and Singvogel's Aggression was also rated 5.

The goblins force consisted of 20 wolf riders divided into units initially four strong. The Chosen One and his band were rated Rep 5. The other four bands were rated Rep 4.

The Order deployed in the center of one long table edge while the goblins deployed with each band roughly evenly spaced along the opposite edge.

The rules used were Musket and Shako believe it or not. The only change made was to require a roll on the Warrior Heroes Armies and Adventures missile damage table whenever a goblin scored a hit on a knight.

The Order quickly advanced towards the center of the goblin array. For their part the goblins had a bit of trouble coordinating and the left most band hung back a bit to await developments. 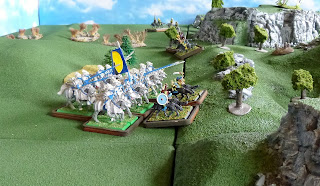 First blood went to the Order as they charged and drove back one of the goblin bands.  However the wily goblins fell back losing only one or two warriors who felt they had done enough this day.

The goblins reacted by circling the knights, firing from both left and right. On the Order's right one section of knights was goaded into leaving the regiment to drive of their tormentors. 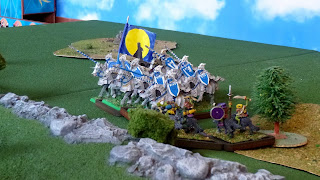 At this point the goblins on the Order's left flank drove home a charge, disordering the knights and sending them reeling back with loss. 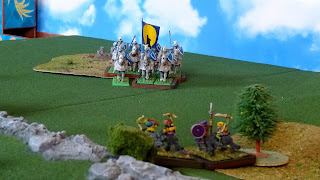 The normally well disciplined knights were quick to rally however and the combat continured. 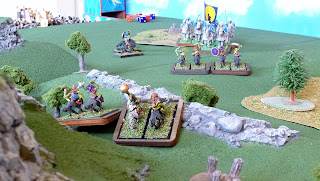 With six goblins already lost, and the knights, if only temporarily checked, I committed the Chosen One.
He led his band straight at the knights. However the distance was too great and it would be a turn or two before he could add his band to the fray. 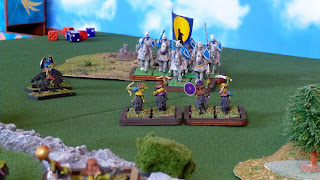 The knights charged again, driving off the gobbos to their front. 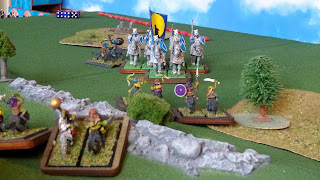 Only to once again be hit in the flank by another band. This time the Order's veneer of discipline cracked and four knights were ridden down as they fled. 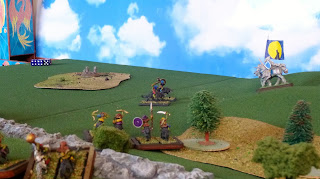 The survivors, Singvogel and his command section, fell back

At this point there were only three knight figures on the table, Singvogel, his standard, and the one knight section that had ridden off on its own previously.

Still the goblins had not had it all their own way and their loss had been greater than the Order's.

Loss of discipline continued to dog the Order as the standard bearer charged off on his own! 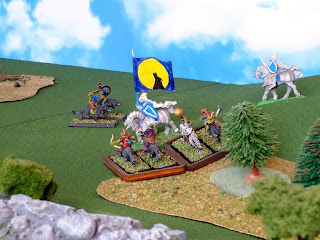 Eventhough he succeeded in driving off his tormentors he soon disappeared under a pile of wolves and greenskins. 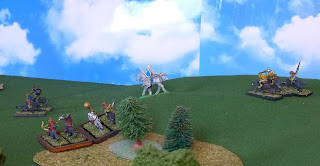 No doubt Master Singvogel was furious at this turn of events.
He would drive off the greenskins single handed  and fall if necessary rather than live with the dishonor of the the Order's defeat. 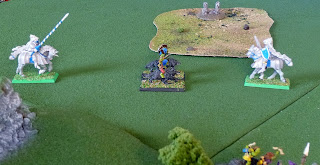 Yet here was a glimmer of hope. The section of knights that had ridden off on its own, was now returning! Perhaps the greenskins could be caught between the two forces?

It was not to be. The agile wolf riders rode out of the trap and others descended on Singvogel for the kill.

This left a single knight figure in play. The end would not be long in coming. 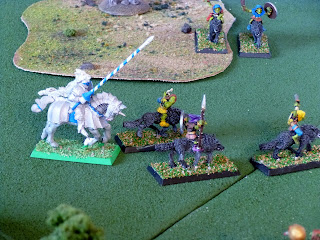 Never the less he charged driving the gobbos before him. 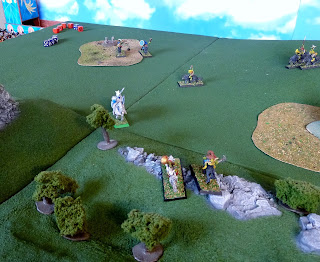 Clear for the moment he turned and charged the Chosen One! 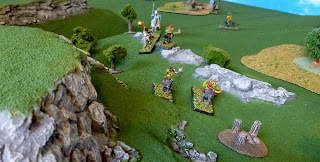 Such was the fury of the charge that half of the Chosen One's band fled in abject terror.

And then a single arrow found a weakness in his armour and he fell. 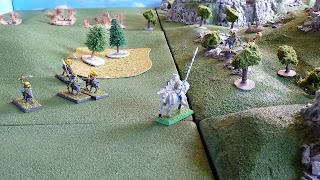 An exciting game that saw the loss of all ten knights of the order (some 200 - 400 men), and the loss of 15 wolf riders (300 to 600 goblins and wolves). Most of the goblin losses were due to the warriors having lost their nerve or run out of arrows, and so most could be expected to return to the lashkar afterwards.

Not so the poor knights of the order.

With a vicious smile on his lips, the Chosen One, led his lashkar towards the Altengard camp to make sport of the men bewitched there...

The problems of reflecting tribal warfare on the table top are something of an obsession of mine. The dynamics behind tribal fighting are so "alien" to European military norms as to require special treatment.

This becomes especially so when the tribesmen are mounted.

Warfare of this nature requires space and plenty of it. Unless the regulars can draw the enemy into a situation they cannot flee, the best course for the regulars is to "fort up" and either drive the enemy off with superior firepower or just wait it out until tribal ardor cools.

In the example game above, the knights would have been better off either splitting into individual squadrons in an attempt to herd the gobbos together or to just have formed square so to speak, facing the squadrons outward and trusting to armour for salvation until the gobbos went away.

Of course in a more modern setting the regulars would have side arms, enabling them to skirmish with the irregulars or just fire back from the square, dispersing the irregulars that much sooner.

Now back to the rules and concepts. The one thing that table top games really lack for this sort of thing is the space required. My table is 8x4 feet, although I mostly play on an 6x4 feet or even smaller surface.

Some of you with gaming clubs or huge spaces can no doubt produce much larger playing areas. However my intent is to make the games playable on the sort of table likely to fit in one's spare room.

With that in mind, some aspects of irregular warfare have been tweaked to allow for a faster resolution of affairs than would normally be the case. This allows the action to remain fairly localized, yet give plausible results for this sort of action.

Well that is the theory anyway : )

Hope you enjoyed our little talk.