Now it’s time to set up terrain and the PEF markers. You can do this randomly or choose the terrain which is what I did. I roll for random placement of three PEFs.  Here’s a picture of the table. 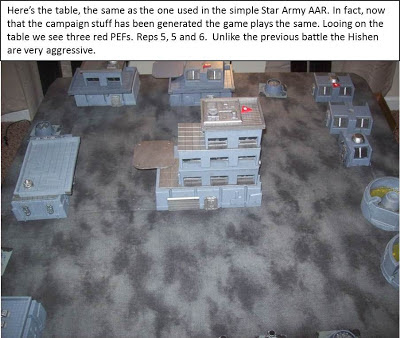 Now that you’re ready to start the Mission there’s one more optional thing that can be used. Basically, how do you enter the tabletop?  This is determined by rolling 1d6 and checking the Insertion table. Note that each Faction has their own. Modified by the Mission (Patrol) I see that my squad is walking in. With any luck I could have arrived on the table in an Armored Personnel Carrier, atop an Armored Fighting Vehicle, flown in on a Drop Ship. Except like I said, we’re walking in.

Each Mission goes down the list, step-by-step of what you must do before the Mission, that which I just covered. In fact, it even gives you the page number that the item is found on.

PEF stands for Possible Enemy Force. You do not know what a PEF is until you come into sight of it. It could be the enemy or nothing. Each Mission starts with 3 PEF markers on the table and each has a Rep. This Rep is used to activate the PEF until it is removed or replaced with actual enemy figures. PEFs start out of sight of the table edge that the player will enter from and are placed randomly.
Here’s a picture of the 3 PEFs deployed on the table. As they must start out of sight of the player they are behind and inside buildings.
The Reps of the PEFs, generated randomly, are 6, 6 and 5. This means they will be very aggressive.

Each Mission has a unique objective. In the Patrol Mission it is get my Squad Leader or my Assistant to within 6” from the opposite edge of the table, in each of the three sections. Once there I must spend one full turn of activation observing. Finally I must exit off of the edge that I entered.
But I think my squad is actually being used as bait to get more Hishen into the open.

The Mission and Mechanics

In this Bat Rep I’ll play out the game taking pictures and explaining mechanics when they occur. 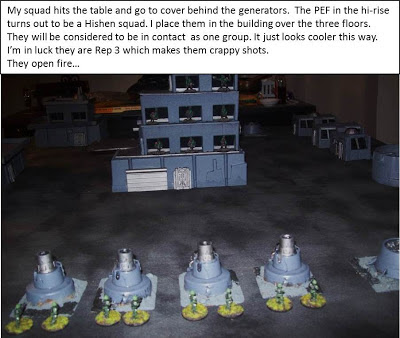 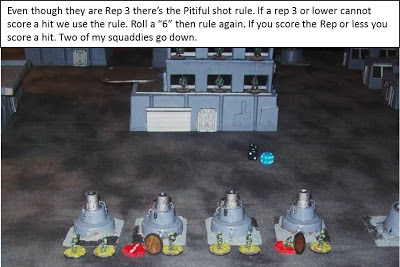 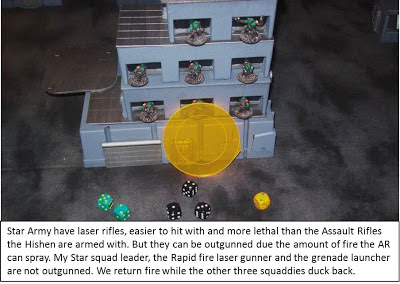 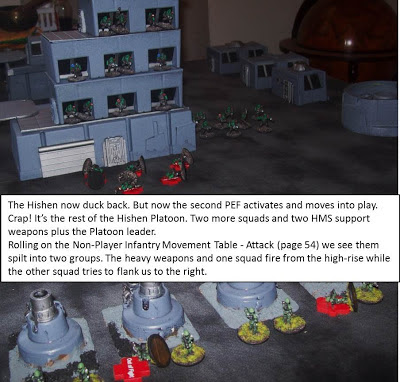 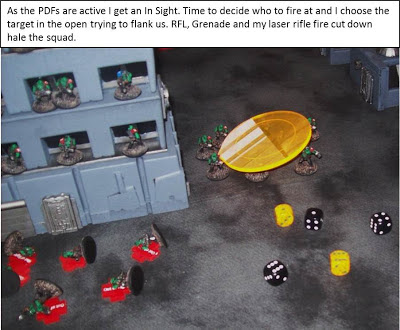 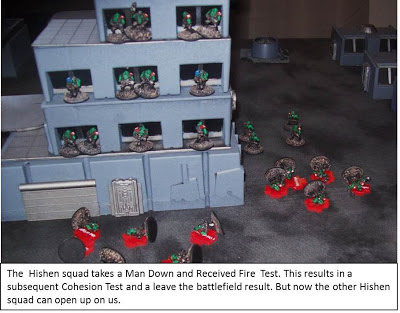 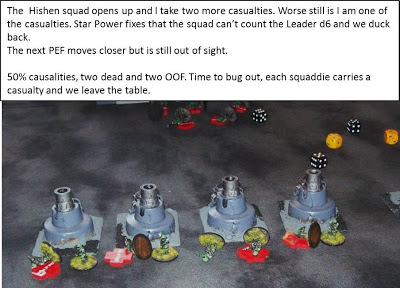 After a few turns you’ve memorized most of what you need to know.
This was for a full blown campaign game. Playing a one off pick-up game skips all the rolls and sections we went over before the terrain was set up and PEFs placed.