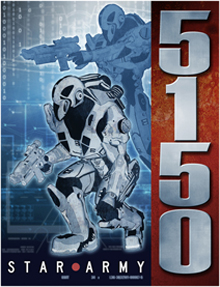 In Part One of a two part article I will go over simple 5150 Star Army, from start to finish. In 5150 Star Army you’re the leader of a three squad Platoon. Figures are grouped into squads of eight with each squad made up of a Squad Leader, an Asst. Squad Leader and six soldiers. Usually two of these soldiers will have a support weapon. In this version we will show you how to get on the table and playing quickly, typical of the one off game.

So let’s get started.

Star Army has seven Factions that you can use. More are on the way and are available for free on the THW Yahoo Group. So the first thing you must do is choose what Faction you will play. For this Battle Report I choose the Gaea Star Army.

Who Are You Fighting

I decide the enemy will be the Hishen, an Alien Race with the goal to enslave the universe.

Now it’s time to see where we’re fighting. I decide that the Star Army are controlling the planet.

Now that we know the Hishen are invading a Gaea Prime planet defended by the Star Army we can go to our Mission.

How much detail you want in your game is up to you. In this Bat Rep I will show little in the way of detail. That will be in a follow up Step by Step.

This affects Reinforcements and Random Events, both are optional but I use them for one off games as well. I give both sides an Investment Level of 3.

I choose a Star Army squad of 8 figures. The enemy needn’t be laid out yet as you don’t know what you’re facing.

Now it’s time to set up terrain and the PEF markers. You can do this randomly or choose the terrain which is what I did. I roll for random placement of three PEFs.

This is how you enter the table. I choose the simle way, my squad will walk in.

As this is the first game I choose a simple Patrol Mission.

PEF stands for Possible Enemy Force. You do not know what a PEF is until you come into sight of it. It could be the enemy or nothing. Each Mission starts with 3 PEF markers on the table and each has a Rep. This Rep is used to activate the PEF until it is removed or replaced with actual enemy figures. PEFs start out of sight of the table edge that the player will enter from and are placed randomly.

Each Mission has a unique objective. In the Patrol Mission it is get my Squad Leader or my Assistant to within 6” from the opposite edge of the table, in each of the three sections. Once there I must spend one full turn of activation observing. Finally I must exit off of the edge that I entered.

The Mission and Mechanics

In this Bat Rep I’ll play out the game taking pictures and explaining mechanics as they occur.