Started work on the tentatively titled Muskets and Shakos again after a long hiatus. Much of the game will be familiar to players of Musket and Mohawks, and Rifles and Rebels. However this game ups the scale of play a bit.

Instead of each unit being a section, in M&S each unit is an infantry battalion, cavalry regiment, or gun battery. In keeping with the upscale approach ("Upscale" That's a joke son, a funny, a guffaw) some mechanics have been changed but will still be easily grasped.

Each unit consists of 20 infantry, 10 cavalry, or up to 8 guns. While it is possible to derive a figure scale from this the figures really represent the staying power of the unit more than a specific number of combatants. As units move and fight figures can be lost in dribs and drabs through straggling, desertion and fatigue as well as in potentially greater numbers through combat.

Another change due to the scale of play is the increased variety of formations available. While the sections in earlier games were either formed in line or unformed, M&S deals with the ever popular lines, columns, squares and skirmishers so beloved of Napoleonic players all handled in a easy THW way.

For example a line is an excellent fighting formation for infantry but must test via Fast Move to move at all. Columns on the other hand guarantee mobility, with the option of moving even faster througth Fast Move but are not an ideal combat formation unless your target has already been somewhat worn down before contact. Skirmishers effectively increase the range of your units by deploying well in front of their parent unit and can cause losses to enemies as they approach, however once they are deployed there is no guarantee they will respond to your recall orders and you may find your main battle line critically weakened if you have opted for a strong skirmish screen beforehand.

On to the game!

Rather than use the actual units involved, I kept track of things using the miniature units in play. So in the photo above from left to right the British are represented by the 62nd, 78th, and 21st foot, RA battery 1 and 2, the 50th foot, and the Rifles. There were also three companies of rifles beefing up the skirmish screen along the line.

From foreground to background the French forces are the 2nd, 54th, and 23rd Ligne, the artillery battery, and the 55th Ligne.

It should also be noted that the game mechanics are by design concerned with force allocation and attrition. A good number of the figures "lost" are presumed to have found a reason to visit the rear echelon, baggage camp, find a place to quietly loot the casualties etc.

The British guns have temporarily silenced the French battery.

Turn Three: This is getting serious.

The 62nd foot have started to push back the 2nd Ligne's skirmish screen.
The 54th Ligne loses sees some desertion under skirmish and cannon fire.
The 55th Ligne, apparently discomfited by the Rifles skirmish line charge on their own initiative. They drive in the Rifles' skirmish line but are themselves left exposed.to counter attack. 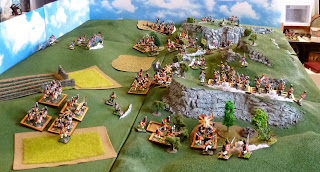 The 62nd foot is turning my left flank.
The 21st forces the 54th Ligne to retire.
The 50th foot advances between the 54th and the battery under cover of one of the ravines.
I launched my reserve, the 23rd Ligne at the 50th only to be repelled with loss.
Meanwhile on my right the Rifles bring considerable pressure to bear on the 55th Ligne, causing it to retire.

The 62nd continues to fire on the 2nd.
The 21st turns to face the 2nd as well.
With ros beefs to front and rear the 2nd turns its rear rank about and hopes to emulate the 24th foot at Abukir.
The 50th and the Rifles continue to advance.
I withdraw my battery from the field and successfully rally the 23rd and 55th Ligne.
Unfortunately the 54th fails to rally and flees the field.

I decide to call it a day and admit that I am no Henri Delaborde : )

It's even worse than it sounds. Some of the last two turns British losses included guns that needed to be withdrawn from the line. You see the more you use your batteries the more likely it is that guns wills start to drop out of service due to lack of ammunition or crew exhaustion  There is a reason that horse and musket era armies kept reserve batteries.

As many of the units are hidden by the heights in the turn five photo, below you will find pictures of the units at the end of the game.

Before that though, here is my take on events.
"Events" that got well out of my control and very quickly. I reacted too late to the British advance hoping my skirmishers would buy me more time.
Worse yet I over committed to my skirmish line which in a couple of key cases left my battalions short of men when it came to the main event.
Also, and as is traditional, I must blame my dice. There were quite a few even odds events that did not turn out in my favor. Mind you a good commander should not rely on "even odds events" and had affairs been better managed such should have been avoided.

Wellington did very well for an NPC and didn't even have to commit his reserve, the 78th although they did lose their light company early on.
Finally the Brtitish two to one superiority in guns gave Wellington a great advantage and one that seldom goes to the British in the Peninsular War. 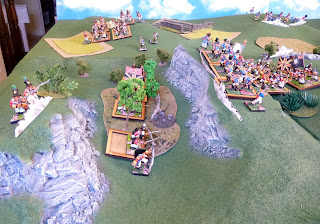 Game End: My Left Flank.
The 62nd gives the 54th line what for. Note the light company on oddly enough behind the battalion firing over their heads from a height.
Note also the 54th has turned to face both the 62nd and the 21st.

Game End: My Center Left
The 21st, having seen off the 2nd Ligne prepares to take on the 54th. 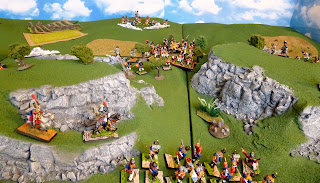 Game End: My Center Right
General Delaborde rallies the 23rd Ligne, who form line while the 50th prepare to resume their advance. 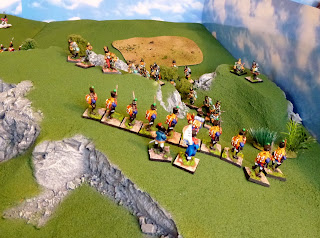 The 55th Ligne is depleted, rallied, and ready for the fight.
The Rifles ascend the heights. 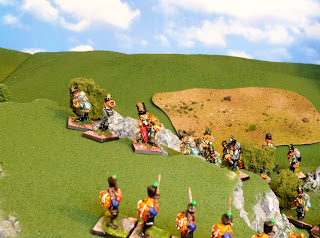 The Colonel of the Rifles and his bugler sense victory.

Hope you liked the report and the direction development is taking.

Posted by M. C. Monkey-Dew at 16:00
Email ThisBlogThis!Share to TwitterShare to FacebookShare to Pinterest
Labels: Muskets and Shakos