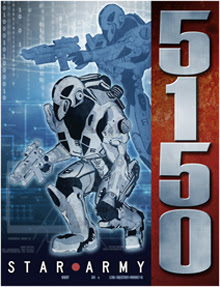 Earlier I posted a step by step AAR for 5150 Star Army as if playing as one off game.
Simple Step by Step Star Army
Now I'll do the same but in a Campaign environment. I've gone into detail in the explanation of the Campaign set up and used all the optional bells and whistles  .Just for informational purposes setting up the Campaign took 15 minutes. Once that is done subsequent battles will add 5 minutes to the normal set up time. Not much of an investment in time but a large payoff in game play. So let's get started..

5150 Star Army can be used for one off games whether playing head-to- head against your friends or solo against the game mechanics. In fact you can play same-side with all players on the same side playing against the game.
But in this article we will show you how easy it is to play a Campaign. A Campaign is a series of battles fought where the outcome of the prior battle affects the setup of the next.
In the Campaign your goal is simple. Reduce the enemy’s Campaign Morale to zero by defeating them in combat.

Star Army has seven Factions that you can use. More are on the way and are available for free on the THW Yahoo Group. So the first thing you must do is choose what Faction you will play. For this Battle Report I choose the Gaea Star Army.

Who Are You Fighting

I decide the enemy will be the Hishen, an Alien Race with the goal to enslave the universe. In game terms you will find that each Faction has its own organization, weapon data, morale (called Reputation) and its own set of Reaction Tests. These Reaction Tests are unique to their Faction and what makes each Alien Race different from the other. You will see that fighting the Hishen is different than fighting the Grath based on how they react in certain situations.

Each Faction has a starting Campaign Morale from 2 to 4. As you succeed or fail on your Missions your Campaign Morale goes up or down, as will your enemy. For this Bat Rep the Star Army has a CM of 3 and the Hishen a 3 as well.

Now that we know the Hishen are invading a Gaea Prime planet defended by the Star Army we can go to our Mission. Players will have two Missions per month and the very first one is a Patrol Mission.

How much detail you want in your game is up to you. In this Bat Rep I will show you all the options. The more you use the less you will know about the enemy when you hit the table. If you’re a player that likes controlling everything, then this isn’t for you! Here are some options you can choose to use or skip. Basically it boils down to rolling a few d6 on some tables. Remember that once you get on the table you’ll only be using 3 or 4, easily memorized tables. The pre-battle tables are:
·        Investment Level.
·        Weather.
·        Aerial Recon.
·        Intel.
·        Force availability.

Weather is an optional campaign tool.
Before each battle roll 1d6. If a 1 is scored the weather is bad. For this Bat Rep I will assume that the weather is good. If it were bad I’d roll 1d6 and the result could affect visibility on the table or aircraft.

Aerial Recon is an optional campaign tool.
As the weather is good there is a chance that my side conducted Aerial Recon. I roll 1d6 and add it to the Investment Level and score a total of 9. I rill 2d6 and score a 8. The high IL allowed me to have success which allows me to find buildings on the table when PEFs(1) are resolved and to increase my Mission Intel.
(1) Possible Enemy Forces.

Intel Level is an optional campaign tool.
Now it’s time to determine how much each side knows about the campaign. This is done by using Intel for each side. Here’s how we do it:
·        Each side rolls 1d6 per point of Investment Level, 5 for the Star Army and 4 for the Hishen. Each score of 1, 2 or 3 is a success. The Star Army is allowed two auto successes for controlling the planet, the Hishen one.
·        After d6 are rolled the SA Intel Level is a 5 while the Hishen is a 3.
To recap we know the following info before the campaign starts.
·        Star Army – Campaign Morale 3, Investment 5, and Intel 5.
·        Hishen – Campaign Morale 3, Investment 4, and Intel 3.

Pre-Mission Intel is an optional campaign tool.
Here’s how your Intel is used. Before each Mission roll 2d6 versus your Intel on the Pre-Mission Intel Table. Yes, another table, but by using these before your battles you will have limited knowledge of the enemy and no two battles will be the same.
In this case I pass 2d6 and know the Enemy Investment Level. This means I know what level of resistance to expect before actually contacting the enemy.

Force Availability is an optional campaign tool.
This table is used to determine what forces you have available for the Mission. In this case I’m choosing a squad. Remember, this is optional.