After the Horsemen AAR - Out of Luck

After the Horsemen goes to the editor tomorrow and Jackie says it'll be finished next week. Here's a quick play test. Sometimes the game isn't fair. 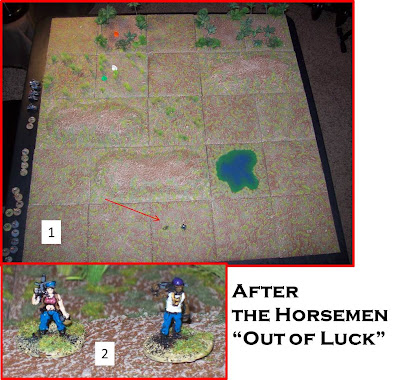 Picture 1 shows thew table top set up. This is a 30" square card table with 6" terrain tiles. To get the biggest bang for the buck I choose move from tile to tile, no measuring needed, and resolving PEFs if they are in adjacent tiles.
Picture 2 shows my characters. T is a Rep 5 Lone Wolf Star with a shotgun. Ashley is a Rep 4 Lone Wolf Grunt with an Assault Rifle. Lone Wolves are limited to one additional character in their group. Want more Grunts? Then you would play a Pack Wolf. 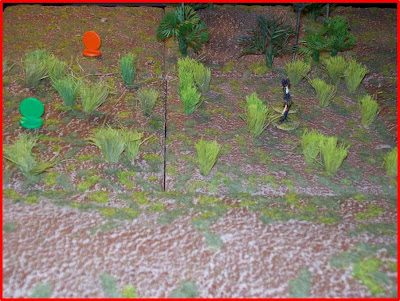 Picture 3 shows our Lone Wolves moving adjacent to two PEFs. Diagonal tiles are always considered to be farther away than horizontal or vertical tiles. I resolve the green PEF first. It is a small 3 man group of Pack Wolves.  T takes a People Challenge Test and we can barter with them and swap info.
In ATH each character has Rep and three Skills, Fitness, People and Savvy. These Skills are used when taking Challenges such as interacting with neutral groups. This can go good, like this one did, or bad where the neutrals become enemies. 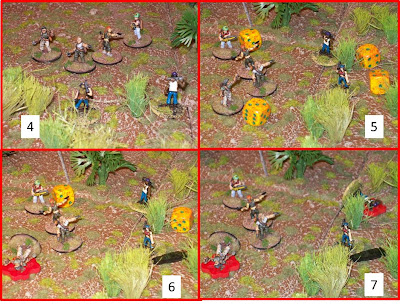 Speaking of enemies picture 4 shows the orange PEF resolved as 4 Pack Wolves. Teo Rep 3's, a Rep 4, and a Rep 5 leader.
Picture 5 shows the results of the In Sight Test. Ashley will be able to fire first, T last, and two of the wolves not at all!
Picture 6 shows Ashley has fired and Out of the Fight the Rep 4 Pack Wolf. She also has run out of ammo. Not good!
Picture 7 shows the Rep 5 leader firing next and scores two hits on  T, an Out of the Fight and Obviously Dead. But T's a Star so can roll Star Power...5d6 are rolled and it doesn't help! T remains OD. Lucky for him he can use his Cheating Death rule. This means he survives the Encounter but reduces his Rep by 1. I figure that the Pack Wolves will just leave him for dead.

Picture 8 shows the situation after the In Sight is resolved. Ashley is out of ammo and facing three opponents. She can't reload but can still move. She declares that she wants to leave the table and the Encounter.This represents her running like hell ducking for cover to get away. There's a rule for this but every opponent with a LOS at the start of the move or that gets a LOS while she is running away gets a chance to fire.
Ashley is shot down and Out of the Fight - Picture 9.
The Encounter is over. This was a one off fight but if it were a Campaign Ashley would roll on the Mercy Table to see what the Pack Wolves decided to do with her.

T lived to fight another day, at a lower Rep, but for Ashley her luck ran out.


Posted by Ed the THW Guy at 13:03
Email ThisBlogThis!Share to TwitterShare to FacebookShare to Pinterest
Labels: AARs, After the Horsemen, ATZ, Two Hour Wargames