This one will be a little more heavier on the mechanics than the previous two. This was an Attack Mission, the goal was to clear the board of zombies. 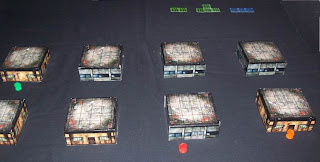 The buildings, representing full city blocks, are laid out with the PEF's being the colored markers.  The humans start by entering section 7 and the PEF's are placed randomly  in sections 1, 2 and 6.
The Area Investment Level starts at 3. I decided to use the counters that will be included in the game. The following picture explains how they are read. 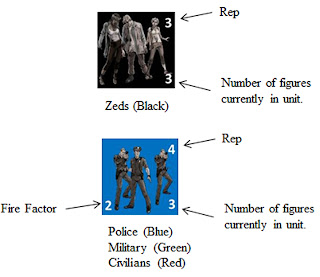 Below are the nine human units. 3 Police and 6 military. The support weapon is attached to the center unit on the left hand side allowing the unit in front of it to combine the fire power onto the same target.

The first few turns saw the PEFs move away from the humans based on the PEF Movement Table. I decided to sweep the table to the right with one body being assigned to clear each street, The veteran 2 military units had the right hand street, the supported green units the center and the police the left. 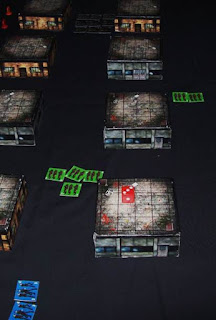 The first PEF was resolved in the center street. Nine units of zombies. Each fresh zombie unit starts with 4 figures. As they take casualties the figures are removed. Counters with 3, 2 and 1 zed are provided so you can make change as the zeds are killed. Here's a picture of the zeds, all at full strength. 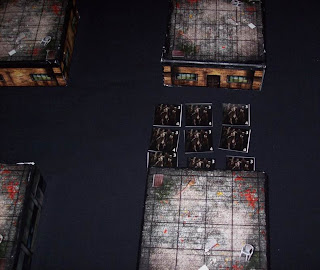 Here's the same zombies after the military has opened fire. With a range of 24" and a movement rate of 3" per turn for zombies, its good if you can start shooting at them from far away. 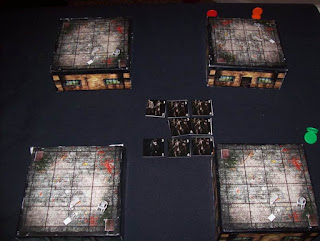 At the start of each turn 2d6 are rolled. Not for activation but to see if a new PEF is generated or a Random Event occurs. Double threes means a new PEF arrives and it is randomly placed behind the zombie horde.
The zeds move down the street towards the military units that are in their sight. The veterans take up positions on a side street. The plan is to get the zeds in a crossfire.

In ATZ FFO when you shoot it attracts zombies. But in a game where we are talking about dozens of humans and hundreds of zombies we need a new mechanic. And here it is. At the start of the zed turn roll 1d6 for every zed unit with 1-3 figures. On a score equal to the Area Investment Level or less they add one figure. Here's an example. As the horde enters the intersection they come under a cross fire. 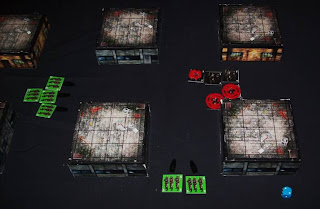 On the left side the police resolve two PEFs, and promptly increase the AIL to 5. See the red dice on the roof. Doubles are rolled and another PEF is generated and resolved in section 4 behind the police! Ten zombie units! As they move forward they split, half going towards the rear of the military units! 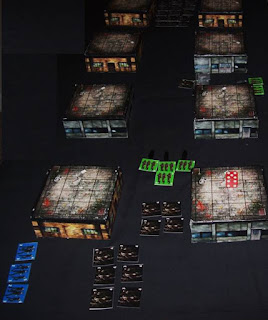 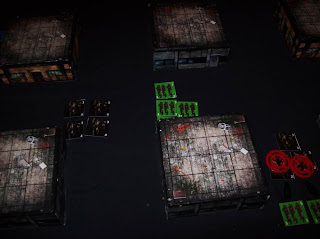 ... and fight the zeds in melee. Game wise the humans only count the figures of the units in actual contact with the enemy while the zeds count all the figures of the body in melee, whether the are in contact or not. So in the melee its 6 humans against 18 zeds. Melee is 1d6 per point of Rep and 1d6 for each additional figure over that of the enemy. The military units break and run away. 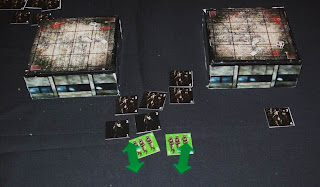 On the other side of town the zeds crash into the police, routing one unit before contact, forcing another to fall back and killing the third to a man. This means two of the human forces are dispersed or destroyed. I realize the Mission is a failure. 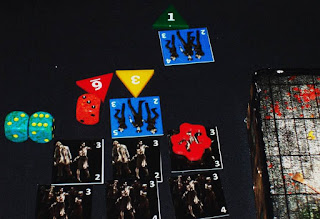 As the hordes of zeds bear down on the last remaining human units morale gives way and they run off or die in their place. 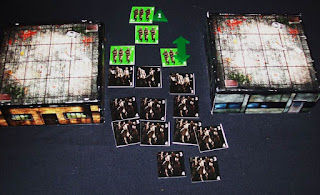 Zombie Campaign Morale goes up to 5, humans back down to 4. The next Mission will be a Convoy to escort unarmed civilians to a safe zone. Things are not going well.
***************************************
Mass Hysteria is a campaign driven game. It's not if you win all the time but you must survive. An Area Investment Level of 5 is very tough and I have to concentrate my fire power, not try to cover the whole board. Losing human units in a lost battle means less available in the campaign.