*****************************
When last we left the Billy's Revenge the crew was unhappy as it had been a month at sea and no plunder. England was at war with Spain, and technically Captain Pink fancied himself a "privateer" but things were getting tight. He couldn't guarantee the loyalty of the crew and still no Spanish in sight. The crew looked at Billy for the word.

"Pilot, bring her around towards that lead ship. We've work to do!"
Shouting in unison the pirate crew went about their work. Billy had crossed the line.

******************************
This will be the first attempt to capture a prize. We will go over it pretty much step by step with pictures to help explain how we do it. How did Billy come into contact with the French? Each area on the Campaign Map has two numbers. The first is the area location from 1 to 9, just like the tabletop when you fight a battle. The second is the Activity Level from 1 to 5. 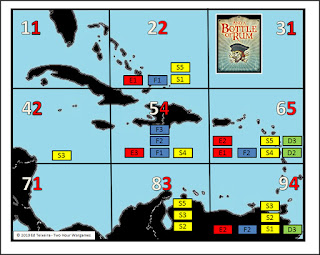 The higher the level the better chance of contacting other ships. Roll 2d6 versus the Area Level and see how many you pass. Billy passed 2d6 last month and had two contacts, the English and French. This meant Billy could choose which one to get involved with. This time he passed 1d6, he would have only one chance.
Rolling for who it was in the area came up French, three ships, one 2nd Rate Merchant as the Flagship with a 3rd Rate and 5th Rate Merchants. Here's the set up after the wind direction has been placed. Keep in mind I am playing Billy and the game mechanics run the French. 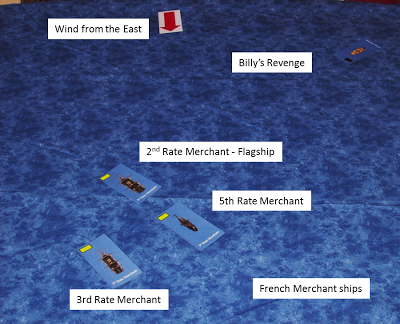 Activation is rolled and the French flagship decides to open fire as Billy's revenge closes in. What the French will do is determined by rolling on the Non-Player Movement Table versus the Rep (3) of the flagship. The other two ships were Rep 4 but as long as the flagship is in the battles, they act off of its results. 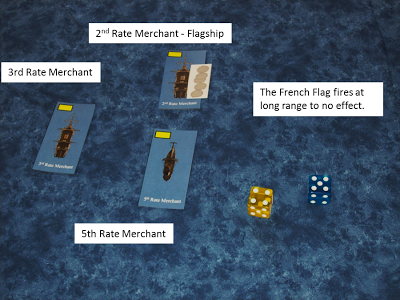 At long range the fire is ineffective. As the French struggle with the wind (the low Rep makes the flagship inactive, which means it cannot turn but otherwise function normally)  Billy's Revenge looks to contact the lead merchant. 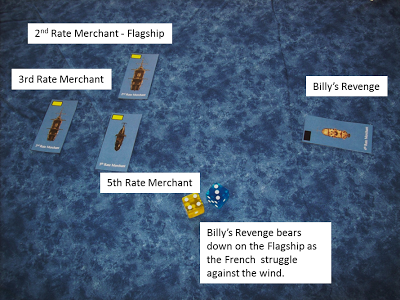 Pirates were not the best gunners and "Rum" reflects that. Pirates get one good broadside per side before they take gunnery penalties for subsequent broadsides. As Billy's Revenge closes to short range, Captain Pink spends 1d6 of "Captain's Influence" to help sight the guns. 4d6 is rolled versus the Crew Rep (5) and 3d6 are passed. 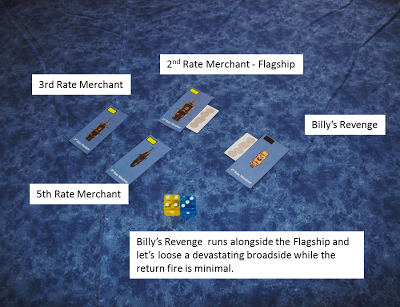 This results in an effective broadside, all guns are counted and 5d6 is rolled. Two hits are scored on the Frenchman and a critical hit narrowly avoided. This results in a reduction to the defense, crew, and maneuverability of the ship.
The French return fire and are ineffective (luckily as they have 5 guns as well. Morale is taken and 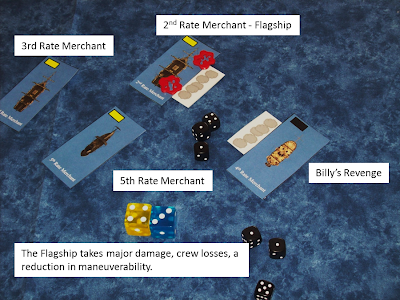 As the next turn plays out the French and Billy' Revenge exchange broadsides. The French flagship takes more damage, morale is taken, and the order given for all the Break Off! 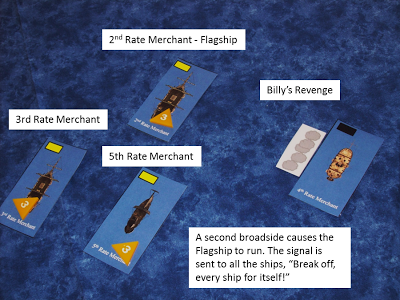 As the order is given the two trailing Merchants turn to port and catching the wind begin to run. The low quality flagship crew maintains course as Billy's Revenge closes in. 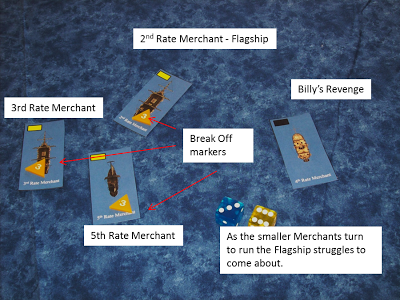 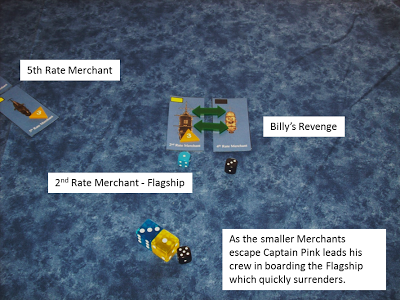 **************************************
Captain Pink has his first prize. From the enemy crew he recruits 10 more crew. The Captain and his loyal crew are set adrift on a small boat with water and rations. The Merchant had 42 tons of Cargo and Billy divides it between both ships. In addition he has captured a French Government Official of some note who swears he will pay 6,000 Gold Pieces in Ransom.
Moving his possessions to the larger 2nd rate Merchant he renames it Billy's Revenge. Dividing his crew between ships he now has two ships in his fleet.

Next month Billy must decide to continue or enter a French settlement and collect his Ransom.