Mass Hysteria is a campaign driven game where each side has a Campaign Morale. Both sides start with a CM of 5. Last Mission was a success so the humans had an advantage when testing morale, something you do after each Mission., Except they choked and blew their roll.
The zeds stayed at  5 while the humans dropped down to 4. If the humans hit zero they vacate the area, if the zeds hit zero the area is zombie free.

This would be a defend Mission and it didn't look good for the humans. The Area Investment Level was 4 (they could expect lots of zombies) and there were only civilian units available to fight. Then it got worse, it was night time and the zeds were on the move. This reduced visibility from 24" to 6". With zed movement being 3" (humans are 4") being able to pour fire at them over many turns was the way to succeed. This wasn't going to happen with visibility reduced to 6". Worse still, this meant PEFs would be resolved when they were 6" out, not the full 24" away. 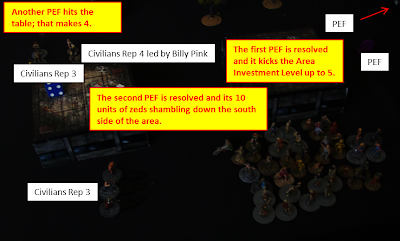 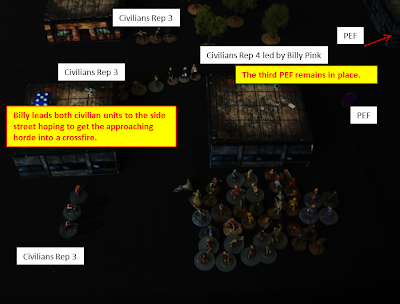 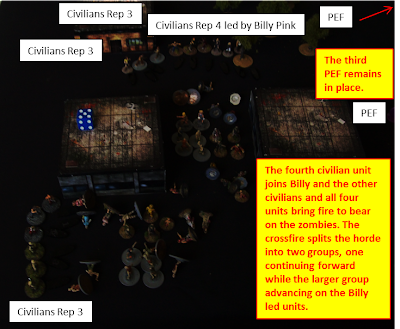 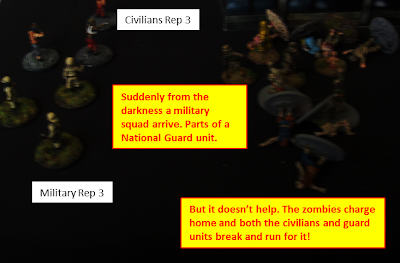 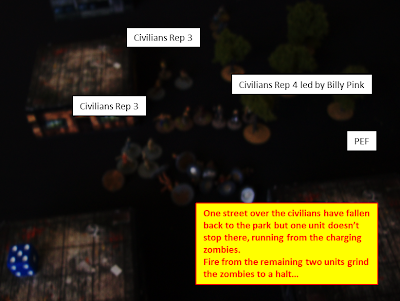 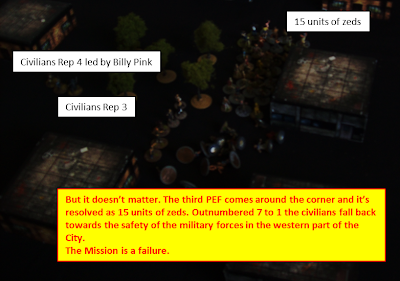 Zombies are regenerated each turn. Any zed unit with less than 4 figures rolls 1d6 against the Area Investment Level at the start of their turn. Pass 1d6 and add a figure to the unit. Pass 0d6 and you don't. Full units of 4 don't regenerate.

PEFs have their own activation phase and when resolved are replaced with zeds. No action is taken by these zeds until its zombie activation. Different than other THW rules.

Reaction Tests have been blended into a Crisis Test. Humans will take it when one of three things happen.
Being charged by zeds.
If in melee.
If you see another human unit Fall Back or Run Away.

There are three unit types, Civilians, Police and Military, and they behave differently from each other.

Anyway, this Mission was  a failure and the zeds gained the CM roll advantage. Except they flubbed it this time and the Zed morale dropped to 4 while the humans rose to 5. Maybe the news of civilians fighting to save their homes inspired the humans.