We last left Captain Pink  having  captured a French 2nd Rate Merchant and a local Government Official, now held for ransom.  Part 5 To collect the ransom of 6,000 Gold Pieces, Captain Pink would have to go to the nearest French Settlement with the highest Settlement Rating. But Billy has other ideas...

Ship to ship but didn't get a chance to do a boarding action so look for one soon. 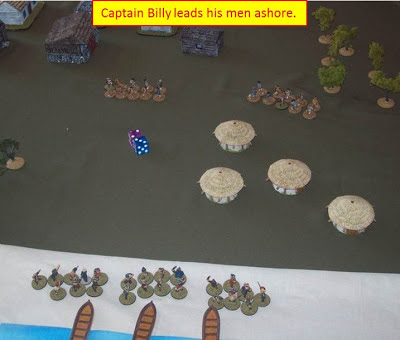 The pirates resolve two PEFs, both Militia units. As this is the full Militia the third PEF is automatically nothing. 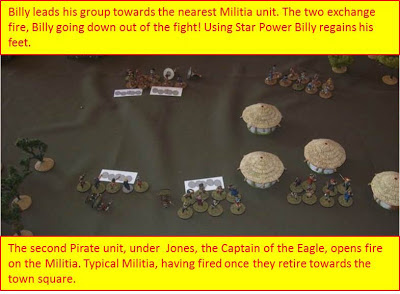 The Militia retire after inflicting heavy casualties and receiving light ones. 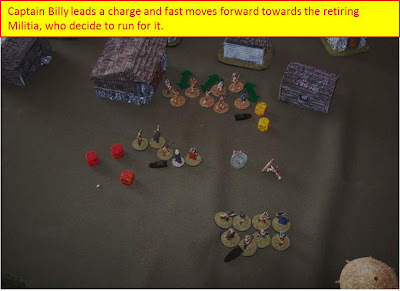 Billy orders a charge and fast moves towards the enemy. Captain Jones' men aren't so fast to follow. 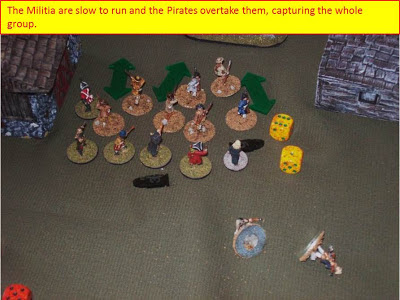 The Militia flee and become captives. 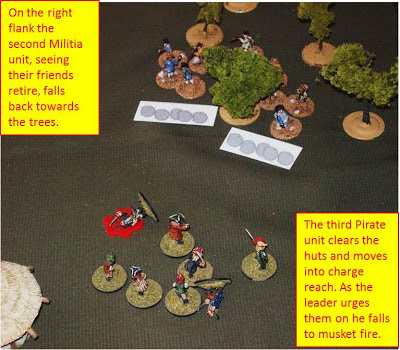 On the other side the 2nd Militia unit fires and retires. 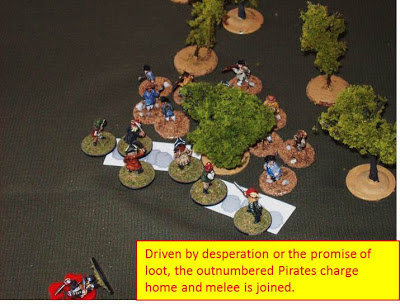 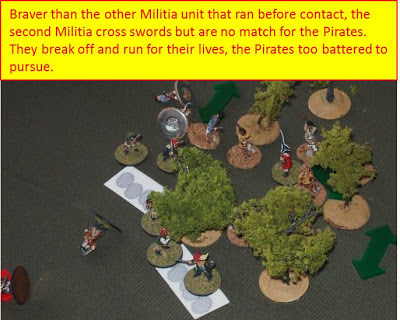 The Militia have had enough and melt away from the fight.

Now it's time to sack the settlement and see what we can get. Sacking settlements can be pretty good with any luck and the higher the SAL the more Gold Pieces. But also  more defenders. Anytime you try and attack a settlement it gets risky as you don't know the number of defenders until you've entered the table and made a move. Billy was lucky, only 20 defenders. Militias use the Townsfolk QRS so don't like to fight in Big Battles, which is the only way to sack the settlement.

Anyway, rolling for the loot came up with 11,000 Gold Pieces! For ease of play when sacking settlements you just get Gold Pieces. Too much bookkeeping required for tons of cargo, etc.

As the Pirate fleet sails away it's time to check Fame. This rises to 9 but drops by 4 for not turning the prisoner in for ransom. So Fame is now 5. But the raid was successful! Yes, but it put the crew at risk whereas gaining a ransom poses no danger!

Loyalty starts as 5. Up 1 for the raid, down 1 for not ransoming off the prisoner.

The Personal Loyalty and Captain's Loyalty tests resulted in morale being very high.

But Billy learned a good lesson, ransom off your prisoners as soon as you can!

Now that Captain Pink had plunder the crew will be counting the days before they get paid. If they reach July and the plunder hasn't been divided their loyalty will go down.