And a Bottle of Rum AAR Step by Step Part 4?

In this installment we pick up where we left off. Captain Billy Pink is going to sea, February 1600.

The Billy's Revenge  leaves the SAL 2 English Settlement and with a crew of 14, himself included, sets sail. The English are at war with the Spanish so Billy is on the lookout for Spanish ships. His crew, however, is on the look out for prizes, any prize. "No plunder, no pay", they say and a flag is just a flag to them.

Billy's Revenge comes into contact with an English Merchant and three French ships, two merchants and a 3rd Rate Warship. No Spanish, no go, Billy decides to leave the two contacts alone.
The crew is not amused.

The month ends and it's time to adjust your Fame and check the loyalty of the crew.
Fame affects your Rep. Go up by 20 points and add one to your Rep.
Go down by 20 points and you subtract one from your Rep.
Billy loses 1/2d6 Fame points for not capturing a prize this month.  I roll a 3, his Fame is now -2. 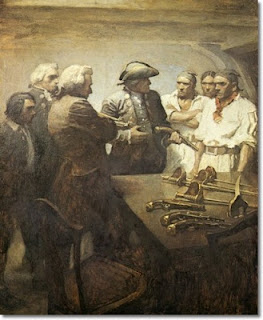 Now it's time to see how the crew feels about what happened this month. Billy starts with Loyalty equal to his Rep, 5. He loses 1 point for not taking a prize so is now a 4. Rolling 3d6 on the Loyalty Test he passes 1d6. Not good. His Loyalty is reduced another point to 3. If you pass 0d6 the crew mutinies and you either walk the plank or get marooned on an island with a bottle of rum and a pistol with one shot.
****************************************************
Okay, so this isn't working out like I thought it would. The English are at war with Spain so I could attack Spanish ships and say I'm a privateer but I haven't seen a Spanish ship. I know if I attack non-Spanish ships that makes me a pirate but I'm not seeing much of a choice. With any bit of bad luck the crew could mutiny and I'd have to Cheat Death (go down to Rep 4), start over with 50 odd Gold Pieces and no ship. My only hope is to contact some Spaniards next month. I decide to head east to area 6, a target rich environment. 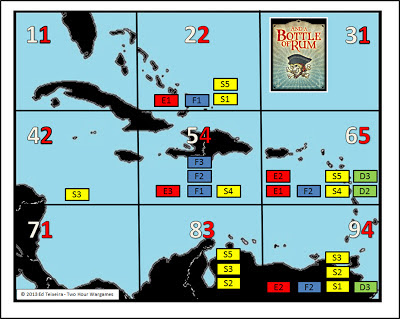