Having gotten the rules themselves sorted out, its time to turn to the Encounters the campaign game will generate. Actually I have a pretty good idea of what and how these encounters will work. What I need to focus on is force compositions and enemy generation.

Right now you will start a campaign with two infantry brigades of three battalions each, a cavalry brigade of two light cavalry regiments, a battery of horse guns, and a battery of field guns.

Beyond that each force will be appointed corps assets from your non-player corps commander. The details of the sorts of assets you will receive will vary from nation to nation so that the French, for example are likely to get an additional battery of artillery while the British are likely to receive a few companies of light infantry instead. So far so good.

Now one thing those of you familiar with Two Hour Wargames will know, is that our games are designed to play on surfaces about 3 feet x 3 feet. One certainly can, as I almost always do, use a larger area, but we really want to provide games that can be played by those with limited space.

On to the set up: I am playing the French in 1810 in sunny Spain. For this battle I will be fighting against the British (which may include Portuguese troops, but I could just as easily ended up fighting the Spanish army and guerrillas.

I've gathered my forces and plan to send out my cavalry brigade to find out just where the enemy army is located.

To this end I sectioned off a three by three foot section  table. 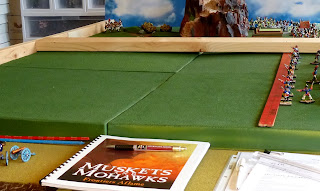 Next I roll to see just what kind of terrain I will be fighting over. Normally there is an even chance of clear, wooded, or hilly, but this is the Peninsular War after all and the results are weighted away from clear.

The terrain roll tells me it will be hilly. I roll for each of the nine 1 foot square sectors to see what is in each.

I am presented with a rugged landscape. A hill immediately to my center front, a short ridge in middle table with some woods, and a long ridge with woods in the back. Rolling for the woods, I find that the middle distance wood is old growth and so will be passable to formed troops although causing them some disorder.
The far distance wood however is new growth, cluttered with undergrowth and impassable to horse, while infantry may only enter as skirmishers.

Think I will change my plan and lead with an infantry brigade.

Now I place the PEF's or Possible Enemy Forces. I actually designed the PEF system for my American Indian games and my PEF markers, are accordingly startled birds flying out from the bushes in best John Ford fashion.

Here they are on the table.

You may, as always, click on the photo to see an enlarged version of it, however to save you the trouble I'll just point them out to you.

One is in the center distance woods on my (coming from the orange yardstick) right, up on the short ridge. The second is behind that one, on the long ridge at the far side of the table. The third is in the woods on the other end of the long ridge.

That's it for the setup. I am facing a series of ridges with Possible Enemy Forces defending those ridges but I  cannot as yet see them.

Reminds me of any one of several factual and fictional accounts of the war in Spain before and must say "I don't have a good feeling about this"... : )


More as it happens.
Posted by M. C. Monkey-Dew at 11:45
Email ThisBlogThis!Share to TwitterShare to FacebookShare to Pinterest
Labels: Muskets and Shakos