Last time we looked at setting up a Scout encounter in Muskets & Shakos. To recap in this scenario the player(s) is presented with a table full of terrain but with no enemy forces deployed on it.

The objective is to get one of your officers to a point where they can view the center of each of the nine 1 foot by 1 foot squares that make up the battlefield. Those officers must then make it back to your start line to make their reports.

While no enemy is present on the table there are three Possible Enemy Forces or PEF's deployed at start. These PEF's can be moved by the game system and once you get a line of sight to them will either turn out to be enemy troops or nothing at all but a case of the jitters on your part.

For this encounter you start with only one brigade of your troops, in this case three infantry battalions. The rest of your division might arrive during the course of the game or might not according to the whim of fate.

As a reminder this game was limited to a 3x3 foot area delineated by the 2x4's and the yard stick. You may safely disregard anything outside of the those bounds.

Turn One
The first turn started with my moving all three battalions onto the table.  Each battalion put out a skirmish screen of three figures and followed in column. Two battalions went to the right of the hill in the center of my deployment zone. The other one went to the left.

The skirmishers soon confirmed that a battalion of British infantry, the 62nd, was occupying the old growth woods atop the ridge distant center in the above photo. As these were old growth woods, the battalion was in line but in disorder due to the rugged nature of the terrain. 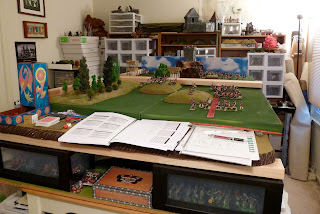 Naturally a firefight soon developed between my skirmishers and the battalion.

During the British turn one of the two PEF's behind the far ridge, split into two. Now there were still three Possible Enemy Forces in addition to the 62nd foot.

With the 62nd occupying the hill to my right front, I decided to form my right most battalion into line, while sending my second battalion to take the hill from the flank.

My third battalion continued to advance to the left of the center hill. 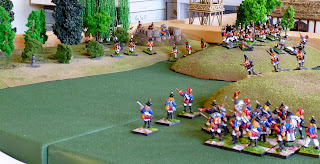 During the British turn, one of the remaining PEF's moved from behind the ridge, and came into sight. It turned out to be a section of guns behind works, supported by the 21st foot. The 21st had thrown out a strong screen of six skirmishing figures.

While it may seem strange that a moving PEF turned out to be an emplaced gun, keep in mind that Possible Enemy Forces are just that, "possible". They give only an impression of where you think the enemy might be. Only when revealed by your having sighted then can you tell what if anything they represent.

Apparently my skirmishers did not spot the emplacement immediately, only noticing it sometime after my turn had been completed. 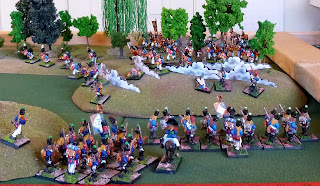 Meanwhile the fighting around the 62nd intensified.

I had thought my left battalion safely behind the cover of the center hill, only to find that the British gunners could see them when a ball tore through the column.

It was at this point that I developed a cunning plan. While my first two battalions kept the 62nd busy. my third battalion would race across the open ground to the far ridge. Once there the ridge itself would shield them from the guns on my right.

This battalion would then see off the skirmishers from the 21st, and occupy the new growth woods atop the ridge. Being new growth the battalion would have to break down entirely into loose order, but I hoped that the officer would at least be able to complete the recce of the three ridge sections and then make a dash back to my start line.

The fighting for the middle ridge carried on and if you look closely at the photos you will see the first sign of men breaking from the ranks to make themselves scarce.

For game purposes these figures might as well just be removed from the table, and indeed there is no need for infantry casualty figure either. I just keep them on the table for the look of the thing. 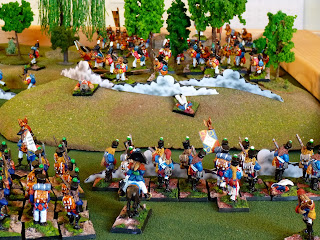 My traffic management skills were found wanting, and my center and right battalions bunched. This both decreased the effectiveness of their fire, and left them vulnerable to counter attack although fortunately this latter did not materialize.

All was going according to plan. Well mostly. I decided to separate the center and right battalion to restore order so this delayed the center battalions push on the 62nd's flank.

On the plus side the left battalion had advanced through shot and shell (really) and made it to the dead ground by the far ridge.

Both sides skirmishers were plunking away at one another and as a result both screens thinned.

I avoded the temptaion to reinforce my skirmish line as that would have left me with fewer troops for the real fighting to follow.

The combined weight of my skirmish line and the left column, now turned to face along the ridge, saw off the last of the 21st's skirmishers. The center battalion was clear of the right battalions and all the pieces were falling into place. 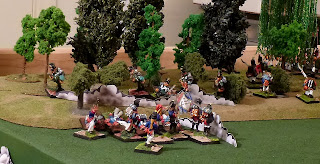 ...the treeline on the far ridge erupted into a cloud of smoke as a detachment of the 95th Rifles fired point blank into the flank of my left battalion column!

The carnage was terrible yet somehow the troops kept their order.

All hope of victory has been dashed. It was now clear that even if the left battalion could fight off the 95th, it would be spent and unable to complete its mission. I decided to call it a day and conserve my forces for the inevitable British assault that would now follow as the next encounter.

Yet this was more easily said than done. The left battalion was essentially stranded under the guns of the enemy. I could face them away and march at best speed hoping that the following rifle and cannon shots would not destroy what remained. Or I could retire facing the enemy. This would be a very slow process and would subject them to even more rifle and cannon fire.

In the end I decided to face the Rifles and shoot it out. If the Rifles could be seen off then I would only have to worry about the guns during my retreat.

As it happened the very next volley of the Rifles killed the Colonel and brought the battalion down to five figures rendering it hors de combat. The remainder fled making best speed for the safety of our lines.

The other two battalions were able to retire unmolested.

It was with some irony that I noted that with center battalion, the 55th, I had done an admirable impression of the Noble Duke of York, having "marched them up to the top of a hill and marched them down again".

My loses were as follows:

The majority of these losses were of course stragglers rather than actual casualties.

I didn't count enemy losses but they were rather less than mine.

Where did I go wrong?

Well I lay no claim to tactical brilliance. Indeed it may be said that I went at them "in the same old way". Still I avoided the pitfall of charging troops that had not been weakened by fire, and if the dice had been kind and if the 95th had not appeared where and when it had...

"What if" is always the province of the defeated wargamer.

I probably should  have attached a battery to my brigade. Can't remember why I hadn't.  Probably was just in such a hurry to get on with it I simply forgot.

How as the game?

If I do say so myself it was a cracking game. As I wrote in the Set Up post this situation seemed all too familiar and indeed that was how it played itself out.

I take considerable satisfaction in that aspect of the thing. The dice really were unkind when it came to British forces and movements. I was unfortunate in that such strong British forces were generated and the chances of the them appearing where they could do the most damage was entirely down to luck.

As usual the figures are from Alternative Armies and were painted by their talented staff painters.
The table top was made of Old Glory Terrain System tiles while the hills and most of the trees came from The Terrain Guy. The remainder of the trees are from Lemax, Warzone GTS, and model railroad trees of uncertain vintage.

Hope you enjoyed reading about the game as much as I enjoyed playing it!

Bob
Posted by M. C. Monkey-Dew at 09:21
Email ThisBlogThis!Share to TwitterShare to FacebookShare to Pinterest
Labels: Muskets and Shakos