VESPERS - A Bat Rep for the soon to be released Joust

"Are you okay?" she asked.
"Yes, I'm fine," he replied.
"Well you didn’t sound fine," she continued. "I mean do you always throw…"
Sir William cut her off with a look. "I must be going; the tourney will be starting soon."
Sir William gave her a hug and headed to the stables.
The serving wench went back to work, muttering to herself that he didn't sound fine and he probably left a "fine" mess for her to clean up.
Sit William led his horse down to the Pavilion and drew lots for the order. It was the Vespers Tourney, the night before the Market Tournament where the younger knights and squires could show their mettle. Hopefully one could win favor and fame to actually be allowed to compete tomorrow but first things first.
"Billy!"
Sir William turned to see a fair young lass running towards him. Before he could protest she had planted a kiss on the cheek and pressed a scarf into his hand.
"Good luck!" she said with a smile and ran towards the grandstands.
"Good luck, Billy," Sir Percy mimicked with a smirk. He had drawn Sir William and couldn’t wait to see what the dandy had.
Sir William just glared and mounted his horse.
******************************
This is a Bat Rep following the career of Sir William of Pink, the third son of the house. Consequently he has no inheritance and has decided to make his way in the world as a knight moving from tourney to tourney making a living.
Sir William, or Billy as he is often referred to, will be entering the Vespers Tourney as this his first real joust. Billy starts with 5,000 Gold Florins, his whole life savings.
He also starts with three Attributes:
·         Martial Skill - A measure of how well he has trained and his skill with weapons, in this case the lance.
·         Prowess - His overall strength and toughness. The higher the Prowess the more damage he can deliver.
·         Horsemanship -His skill at riding his horse and ability to stay in the saddle.
Billy has Martial Skill 4, Prowess 3, and Horsemanship 3 for 10 total Attribute Points. This places him in the lower end of the local Fairs & Markets Tournaments.
He will start with 10 Bonus Dice.
In addition he is allowed one Signature, a demonstrated behavior in the Lists that helps to differentiate him from other knights. Billy has chosen, Ladies' Favorite, which allows him to use three Bonus Dice anytime during the joust and in any combination without having to burn them. In effect he has three free Bonus Dice.
For those of you who are familiar with Red Sand Blue Sky - Heroes of the Arena, the Bat Rep will feel familiar as the mechanics in Joust - Heroes of the Lists are similar.
Anyway, time to launch Sir William's career.
*********************************
Sir William took up position at his end of the Tilt while Sir Percy stood at the other end. The blare of trumpets signaled the start of the tourney and Sir William would be in the first run. 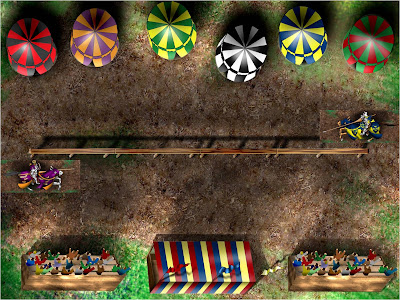 Actual artwork from the game. Includes 6 Knights and the Lists.
First Run - The Kick
Both knights watch for the signal and there it is, a herald waving a flag. Billy puts his spurs to his mount and the joust begins.
********************************
At the start of each run both knights declare the speed that they wish their horse to travel. Once this is done each player rolls on the Kick Table to see how their mounts respond. Horsemanship plays a big role in this.
Sir Percy has Martial Skill 4 Prowess 3 and Horsemanship 2. He has no Signature.
·         Sir Percy rolls to determine his Speed and scores a Trot. However his horse rears and moves forward at a gallop. This costs him one Bonus Dice.
·         Billy chooses to Gallop and succeeds.
·         Both knights move down the Tilt at a Gallop. 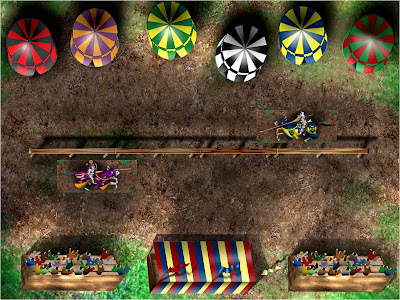 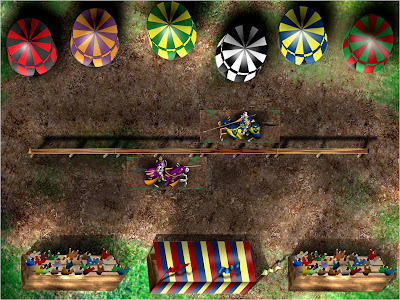 Billy's stomach clenches as the knights crash home. Lances break as both deliver hits! The knights remain in the saddle and pass to the other end of the Tilt.
******************************
First Run - The Clash
Yikes! Crunch time and now each knight roils for impact.
·         Sir Percy scores 8 successes with a combo of rolled successes and auto-successes.
·         Bill score 7 successes.
·         The difference of one means both have landed blows on their opponents. Billy is struck on the shield and Sir Percy is hit in the helm!
·         Neither is with much strength but good enough for both to break their lances and score 1 point apiece. 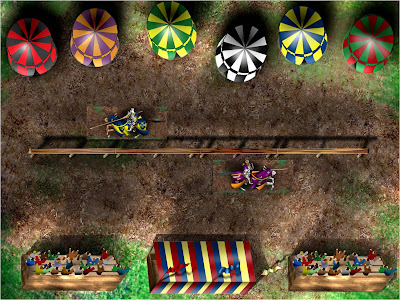 ·         Sir Percy, after using two Bonus Dice, gets his horse up to a Gallop.
·         Billy decides to use two Bonus Dice and attempts to Run but is unsuccessful, getting his horse only to Gallop.