Braddock's defeat was a year old and once again British forces set out to reduce Fort Duquense.

Leading the way was Sergeant Regan and a six man scout from his regiment:

Having crossed the river, Regan thought he saw a glint of metal off to the left. He duly sent Carter and Howard to investigate. 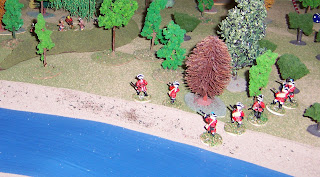 The two men discovered a party of 5 warriors concealed behind an embankment. Carter was able to get off a shot before the warriors but to no avail. The following Indian volley left Carter down and stunned.

Successive Indian volleys killed Howard while Carter was able to regain the safety of the patrol.

In a disturbing development a mixed band of Canadians and Indians emerged from the embankment and proceeded to move around the patrol's right flank, in an apparent bid to cut off their retreat.

Regan was able to rally his men and their fire halted the Canadian warband at the far side of the trail.

Faced with twice his number of fighting men, and with enemy to front and flank, Regan decided to withdraw.
Accordingly he sent Carter with Caine and Hoskins across the river, while the Sergeant, Baker, and Stratham held the enemy at bay.

Seeing this the warriors from the embankment crept forward to take the patrol under fire.
Regan and co. were able to discomfit the Canadians on the flank, causing one to run. Unfortunately Stratham's firelock fouled, cutting the detachments firepower by one third unless he could repair it quickly.

Meanwhile Carter's men took the approaching Indians under fire in an effort to cover Regan's withdrawal across the river. In the ensuing firefight, Caine was severely wounded as was Carter but not before Carter had killed an Indian in the act of scalping Howard.

The carnage proved too much for Hoskins who grabbed the wounded Carter and made for the safety of the British camp.

As Regan and co. were preparing to make their dash across the river, Stratham took a musket ball that laid him low. To Regan's (my!) discredit the wounded Stratham was left behind as Regan and Baker crossed the river. 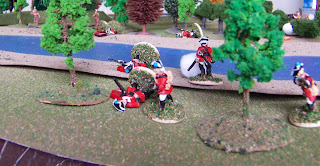 Fortunately for Regan, Baker, and the wounded Caine, the Indians and their Canadian allies did not pursue. 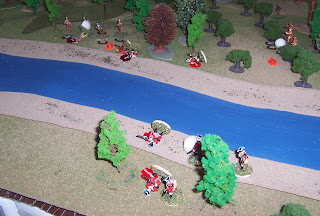 Final losses for the British were Howard KIA, Statham, missing and presumed dead, Caine and Carter WIA. Caine did not last the night. Carter is expected to rejoin the ranks in a month or two.

In return two warriors were killed and one run off.

With an unsuccessful mission and a wounded man left to the "mercy" of the savage foe, the personal loyalty Carter enjoys from his men has taken a hit as well.

For the moment the dense wilderness of the Ohio country remains safely in French hands.

Posted by M. C. Monkey-Dew at 08:05
Email ThisBlogThis!Share to TwitterShare to FacebookShare to Pinterest
Labels: Muskets and Mohawks 2