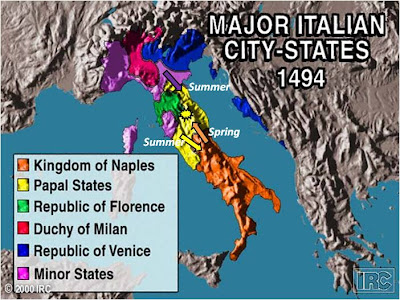 Driving quickly into Naples the Papal army made straight towards the capital city. Duke Nicolas hastily drew up his scattered forces and turned to face the Papist advance. Unlike the previous battle the Neapolitan Commander had chosen a wide flat plain with a small hill to the front and left of his position. Although he was technically the defender he realized that numbers favored the Papists and to wait for them to attack at their leisure put him in jeopardy of being overwhelmed across the line. Instead he decided to take the initiative. He would refuse his own left and attempt to encircle the Papist left flank while pinning him to the front. Hoping to outnumber the Papists on one edge he could roll them up before enemy's superior numbers came into play. It was a gamble but one he readily would take.
Having had success in the last battle with a defensive stance the Papal Commander chose to deploy along the line with his more numerous missile troops to the front. He would again take a defensive stand advancing only to bring his missile men into range. Perhaps the fire would goad the impetuous Neapolitan Commander into a rash charge.
*****************************************************************
Rolling on the Basic Army Tactics Table (page, 52) allowed me to deploy each side based on their army type. The Neapolitans scored an Encircle the Flank result while the Papists a Static Defense. This would give the Neapolitans a numbers advantage to the right flank as they had hoped. The troops were deployed and it was time to start the battle. 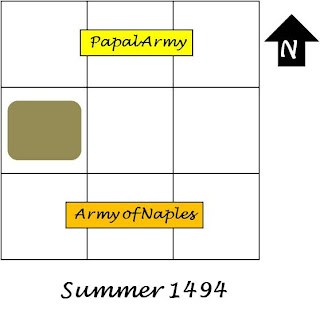 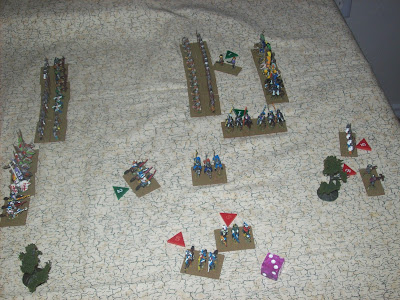 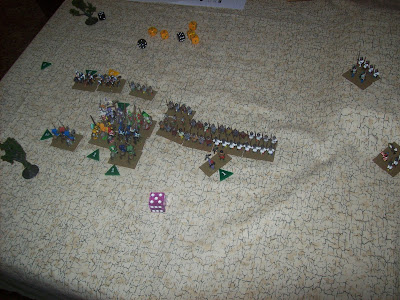 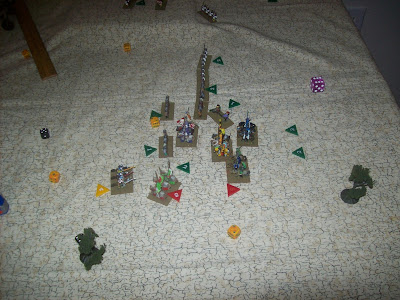 The defeat was overwhelming. With the capture of Duke Nicolas and the loss of the battle the National Morale of Naples was reduced to zero. The Papal States would go down one for conceding the north but go up one for wining a victory. This gave them a final Morale of 6. When news of the victory reached the Minor States to the north a minor fuss was raised by the lesser city states as they had been assured that an actual fight was unlikely before early next year. Instead it would be coming this fall.
Peace terms were negotiated and Naples would have their Recruiting Rolls reduced by one to nine and the Papal States increased to eleven. In addition Naples would have to give the Papists one recruiting Roll in the spring of each year for six years or the year 1500. In return the Papists would become the hated enemy of Naples. Ironically Naples would be cut off from the rest of Italy during the enforced peace as she only bordered the Papal States.

Posted by Ed the THW Guy at 10:48
Email ThisBlogThis!Share to TwitterShare to FacebookShare to Pinterest