To "celebrate" having found my French and Indian War figures, I staged a very watered down version of Braddock's defeat on the Monongahela in 1757. Forces were roughly 1 figure equals 100 men, giving the British about 10 regulars and 4 militia, and the French about 3 French and 7 Indians. Hardly the stuff of epics but enough for a good skirmish game. 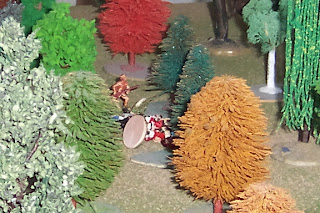 The British advanced guard of 3 figures ran into the French coming the other way along the trail. A sharp shooting Troupe de la Marine figure wounded one and stunned the other two. A nearby courier de bois could not resist the sight of helpless red coats and moved in to finish them off. 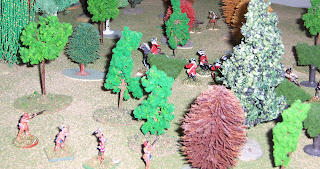 Meanwhile the remaining courier de bois and the Indians fanned out in the woods along either side of the British main body. 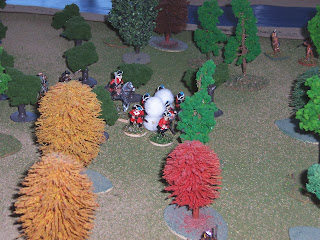 Advancing along the trail, the British regulars formed line and fired a volley at the French lingering about the remains of the advance party. The Troupe de Marine figure bought the farm. 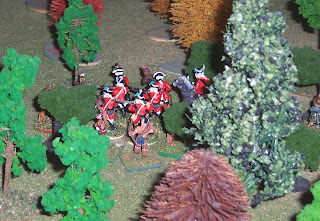 While the regulars were reloading I had the Indians charge the column. Not really the best move as the main body was not at all discomfited so far and while two of the Virginia militia bolted, the rest of the troops were able to fight off the assault with some loss.

A quick game I lost as the French due to impatience. It would have been much better to wear the regulars down with fire and only emerge onto the path to finish off the survivors at the very end. Oh well c'est le jeu de guerre!

Posted by M. C. Monkey-Dew at 15:49
Email ThisBlogThis!Share to TwitterShare to FacebookShare to Pinterest
Labels: Muskets and Mohawks 2