The Wabenaki of St. Francis set great store by the Virgin of Chartres, a silver statue of the Madonna, sent by the friars of that renowned cathedral, in appreciation for some devotional wampum belts sent thence by the Wabnenaki. The idol was reputed by the Indians to ward off the Sons of Malsum, fiends of aboriginal lore; however it failed to ward off the righteous anger of those hardy New Englanders who produced the frontiersmen of Roger’s Rangers. In 1759, the statue disappeared in the wake of that doleful village’s destruction by fire, musket, and sword. To this day the Virgin’s whereabouts remain unknown and it is presumed by this author that the statue has been consigned to that still largely uncharted wilderness of the Green Mountain country.

It had been several long, cold, weeks since Roger's Rangers had burned St. Francis to the ground.
The return march to Fort Number Four on the New Hampshire frontier would be a nightmare from which some were destined never to awake.

Shortly after leaving the village behind,Major  Roger's split his men into several smaller detachments, instructing each to make it's way to Number Four as best they could. Captain Johanthan Delapore led one such party.

In addition to the sergeant and ten men under his command, Delapore was also entrusted with one of the handful of captives taken in the raid, an Abenaki boy of about 12 summers.

As the small band made their way south eastward, they suffered greatly from a lack of game. Even though every night was full of the howling of the wolves and each day with the cawing of crows and ravens the men  never caught site of any animals and the foraging parties returned with barely enough roots and bark to sustain life.

Throughout the captive boy was restive. Delapore presumed the boy's obvious fear was caused by his circumstance, it being no good thing to be held captive by one's sworn enemies.

Eventually, as Delapore was to learn, the boy's fear was real enough, but it was not fear of the Rangers that vexed him so, rather it was  a fear at once more primal and pervasive.

The boy finally spoke up in camp the night that Delapore had ordered all of the men's packs to be searched for stocks of food. Major Rodgers had expressly forbid the carrying of loot, in place of food stocks, and it was with some consternation that Delapore discovered the silver statue of the Madonna in one of his men's packs.

At this the captive boy broke down, and between sobs related a strange tale. The statue he said was the only thing that had kept the Sons of Malsum at bay for these many years. Yet as the statue had been taken from sacred ground it would no longer do so. No doubt the keening of the wolves every night was no mortal howling but howling of  the fiends of the night.

Delapore was disinclined to believe such ravings and yet, that would explain why howling wolves should be so abundant while game was so very scarce.

The boy went on to say that they were all of them doomed unless the statue be returned to a sacred place, and that fortunately he knew of one not a day's march from their camp. It was a site of "the old ones" or so he said, a mound in which the statue could be tucked away and the Sons of Malsum banished back to the region from which they came.

Delapore resolved to send the boy in company with three of his most trusted men, to scout for this mound while the rest of the party dispersed to forage.

The boy and his three minders did not return that evening, and Delapore, fearing treachery led his party on their trail at first light.

The trail led them through a crevice in the rock face into what was apparently a secluded valley. There they found the remains of the men they sought, seemingly ripped to pieces. And always the wolves howled...
Delapore's company of Rangers. The Captain is is first row left in the photo.

The Valley. The Rangers enter from right back ground.

The Burial Mound of the Old Ones.

Delapore leads his men into the valley.

The men make ready to confront something skulking through the brush.
It is a false alarm.

The men reach the edge of the clearing and prepare to approach the Mound.

Ominous movement across the clearing.

Wolves burst from the wood.
Some of them bipedal and brandishing cruel stone weapons! 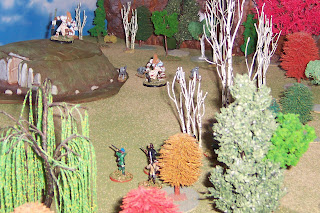 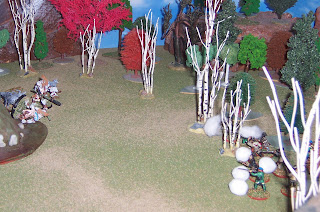 The Rangers open fire.
Two wolves drop but the rest come on. 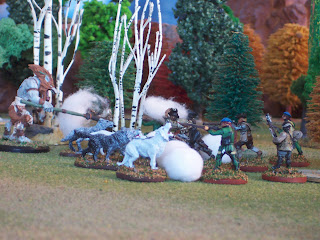 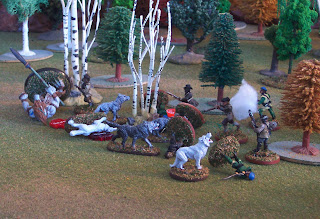 There are losses on both sides as Captain Delapore drops a wolf warrior. 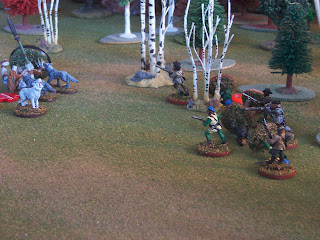 The wolves withdraw, taking their casualties with them.
Now that is strange indeed! 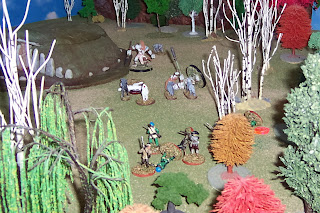 The wolves that were hit on their way in must have only been winged.
They shrug  and regain their feet.

Delapore's less experienced men are shaken by the days events.
The Captain instructs his veterans to keep the wolves under fire while he rallies the men who are faltering. 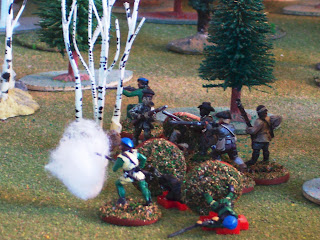 There is a lull in the battle allowing the wounded to be tended too and order restored. 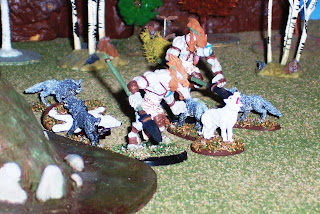 The warrior Delapore slew in combat rises to lead the wolves in a fresh assault.
That can't be good! 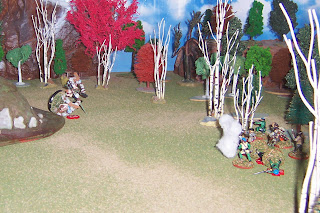 It appears the four legged wolves have had enough as they slink back into the forest.
One of the two warriors is dropped by a well aimed shot. 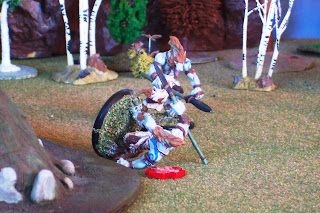 The lone warrior standing prepares to charge.
What's that movement in the trees behind him?

Scattered shots ring out as the risen warrior charges home. 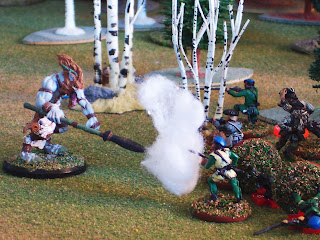 It is a brave gesture but the warrior is over matched... 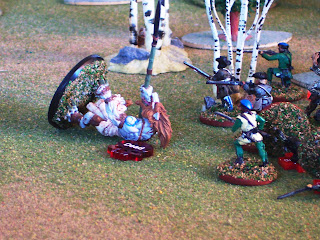 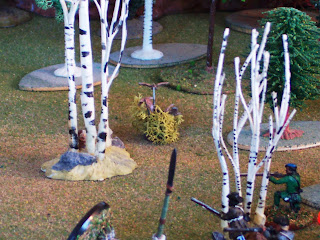 Of a sudden the sound of breaking branches and pounding feet comes from the Rangers' left. 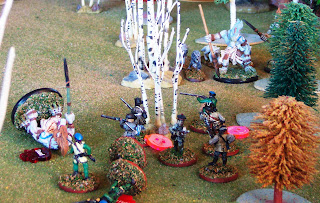 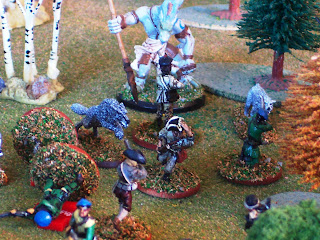 It is too much for the Rangers.
They break and run. 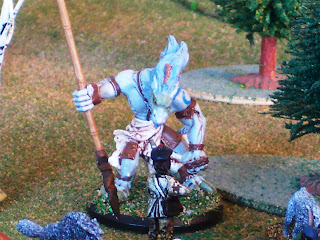 All that is except brave Delapore who faces the wall of fur and fangs undeterred. 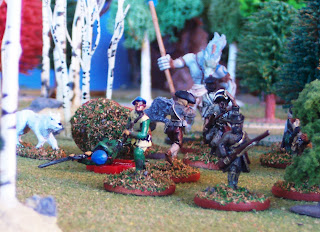 Delapore is torn to pieces and his men hunted down and slain.

It is rumored that treasure looted from St. Francis still waits to be uncovered by those of an adventurous bent. Every few years some brave soul sets out in search of these riches never to be heard from again...

This was a combined Muskets and Mohawks 2 and Warrior Heroes; Armies and Adventures scenario.

The Ranger force consisted of  9 figures, each armed with a musket.

The Rangers' goal was to take the statue into the mound and leave it there. Had they succeeded all of the warrior wolves would have been banished from the earth and the four legged wolves would have gone back to being, wait for it...plain old wolves.

The game system generated the wolves as Possible Enemy Forces were resolved.

Immortal: Wolf warriors may not be killed, only banished. As such whenever one sustains a Knock Down, Out of the Fight, or Obviously Dead combat result it may recover by taking the Recover From Knock Down test. Each time it passes the test, its wound heals one step from OD to OOF, from OOF to KD, and from KD to no wounds at all. As you can see "killing" a wolf warrior would keep it out of play at least three turns as it regenerates.

Both the wolves and the Rangers were classed as Irregulars for the game.

With a little tweaking here and there I suspect this scenario would work with any game system.

Well that's all for now.