Talomir Tales - The City Below Bat Rep - Part One.

With the upcoming release of two more Talomir Tales scenario books - Mooks and Druid's Children - I wanted to do some Talomir Tales gaming. I went for the City Below. Here's the nice thing about THW games. Even though I'll go through quite a few of the Encounters, my results may not be like yours as no two games ever play out the same.  These will be in depth reports to describe game play as well as what's happening during the games.

************
My personal Character is William “Billy” Pink AKA Pink for short. Here are his stats and those for Victaii, the only current member of Pink’s Band.

Pink starts the Adventure with Victaii. He can cut him loose anytime he wants. Don’t feel bad about that, because Victaii’s Rep is the same as Pink’s; if Pink’s Rep drops, Victaii will leave anyway!
************
The Duchy of Altend in eastern Altengard, along the border with Ekra.
As the City Watch kept the small crowd out of the alley, the Captain surveyed the two dead men. Strange, he thought. They had been surprised, throats slashed without even drawing their weapons…and what of the girl?”
“Captain!”
The Captain turned towards the voice and stopped. “What was the Duke himself doing out this late at night and in such a questionable area of town?”
It didn’t take long for him to find out.
***************************
Pink’s friend, the Captain of the Watch, has contacted him and requested his help. The daughter of the Duke has disappeared and her two bodyguards killed. He wants Pink to quietly seek information about what happened and where she may be. Quietly, as the Captain of the Watch can ill afford to be linked to Pink, a member in good standing of the local Thieves Guild.
And so it begins. 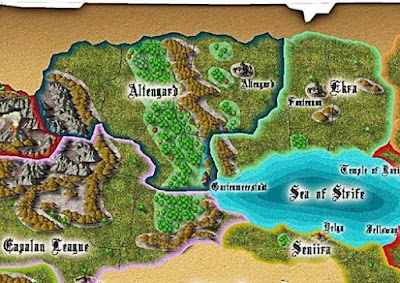 A map of where the Adventure takes place.