The Message - Part Three - A By Savvy & Steel AAR

Well I got sidetracked but I'm back. Here's the continuing adventures of Arthur, Carl, and Dion in New Market. 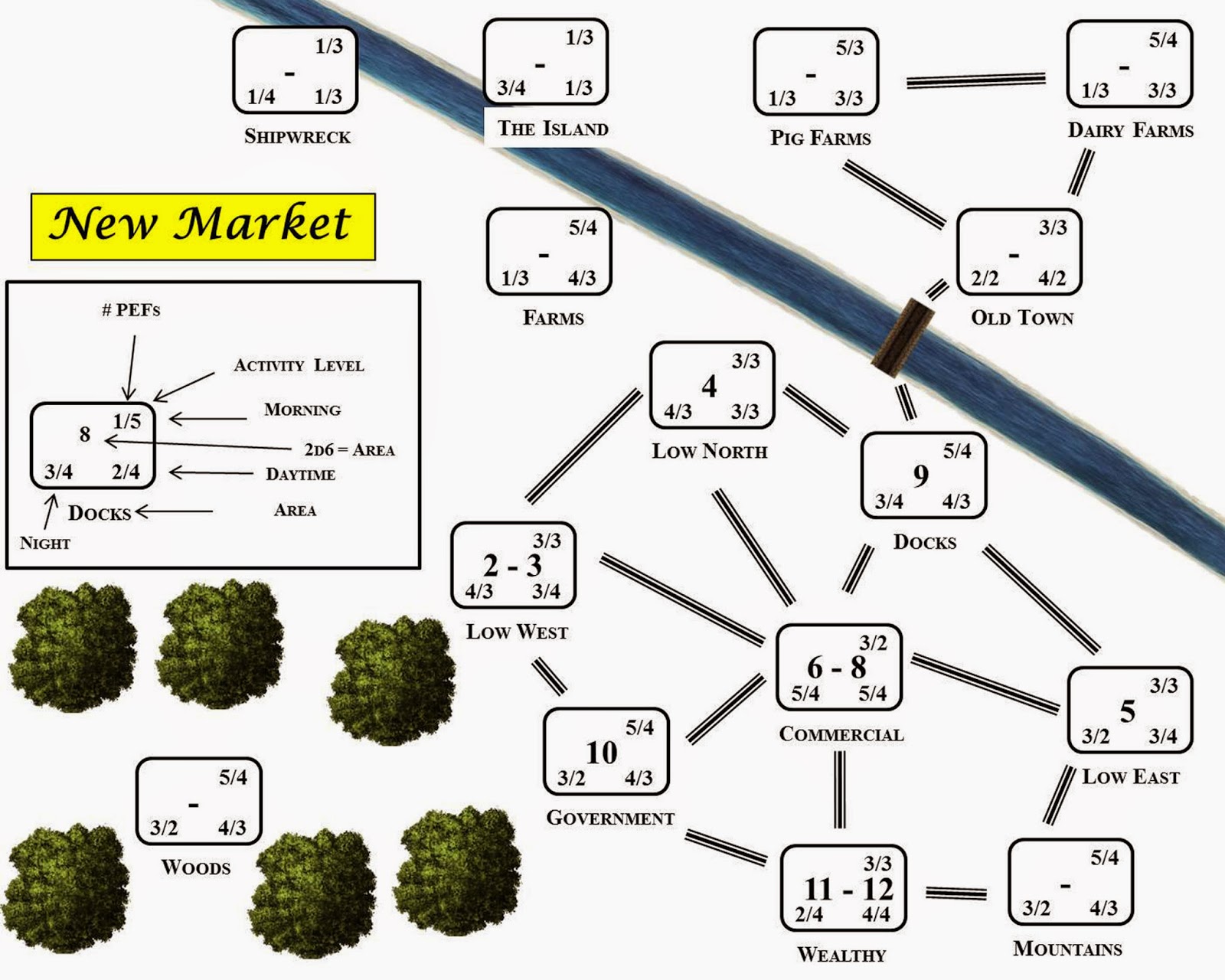 Arthur and the boys have booked a room at an Inn in the Commercial Area. The Bishop is at the cathedral in the Government Area. After breakfast they head towards the Cathedral. When moving between Areas there is a chance (1) of an involuntary Travel Encounter. I roll 1d6 and score a "3". No Encounter.
They enter the Government Area. Looking at the map I see that there will 5 PEFs and an Activity Level of 4. Normally I'd set up the table and move figures about, etc. but I've been using the new Easy Table Rules.

Here's my setup after Arthur and the guys enter in section 9 and PEFs are placed. 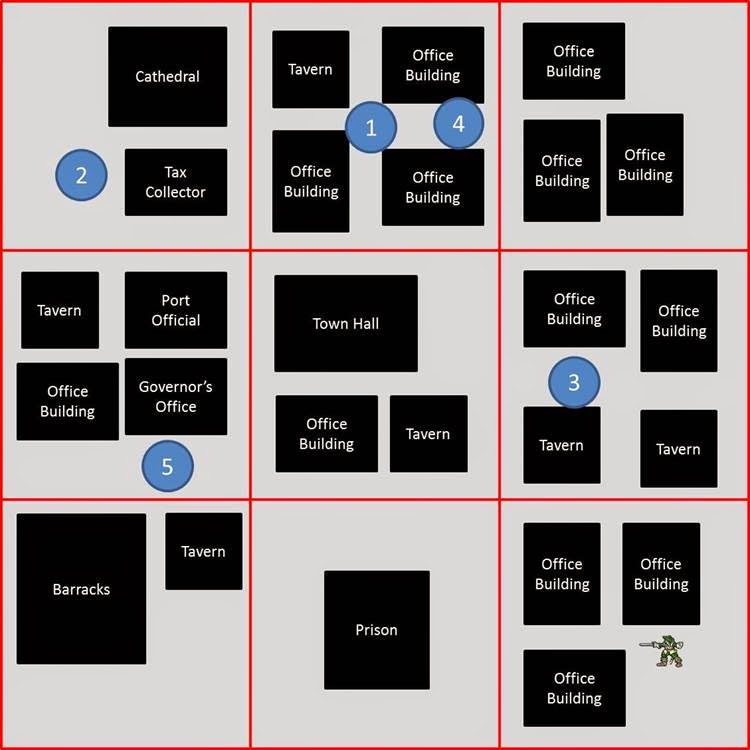 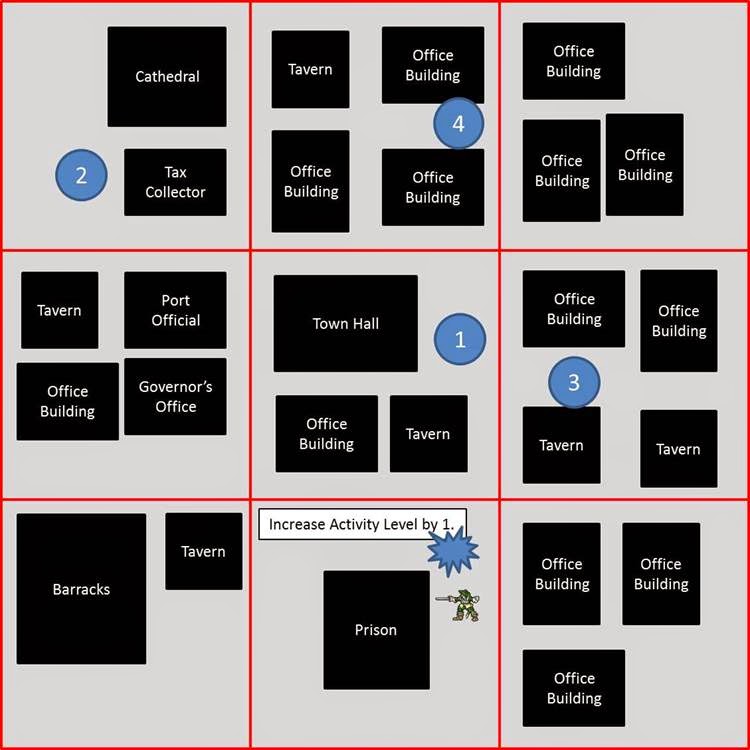 Turn 2 and Activation Dice are rolled.  PEFs go first again. The first PEF moves into section 8 and is resolved. a solitary Gentleman. Rollin g on the NPC Gentlemen List in BS&S I see he is Rep 3, has Initiative and is Agile. I roll 1d6 and score a 2, if a 1 had been scored, he would have been someone previously met.
Arthur and Rep 3 take the People Challenge found in the upcoming New Marker Round. Arthur engages him in  conversation and scores a Pleasant Response. I put his info in Arthur's History Sheet for possible future use. The rest of the PEFs move but do not come into sight.
Arthur and the boys move to section 4 and resolve the PEF. Four Gentlemen, led by a Rep 5. This could be trouble (?) but the People Challenge is Exchange pleasantries, noting more. I add their info on Arthur's History...just in case. 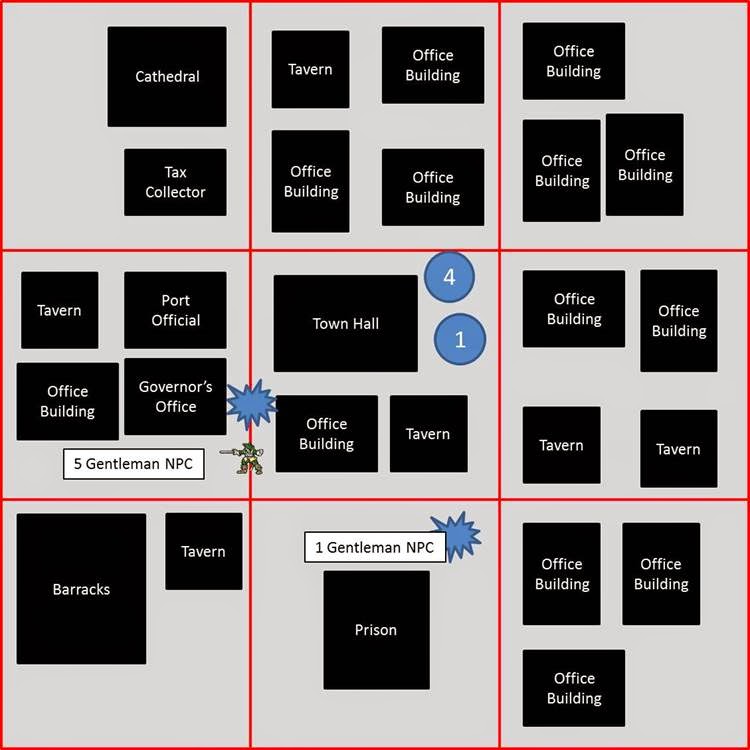 Turn 3 - So far the table hasn't been set up, no minis pulled  activation is rolled. Arthur moves first and heads to section 1, where the Cathedral is located. The PEFs activate, one moves away from Arthur, the other says still . The trio enter the Cathedral and the Defining Moment (PEF) is resolved.
It's a Doctor, one of the new Professions for BS&S, about 50.
Maybe Arthur bumped into him or something, but the man gave him the Cold Shoulder. Definitely have to write this one in the history.
So far the game has taken15 minutes of actual time. 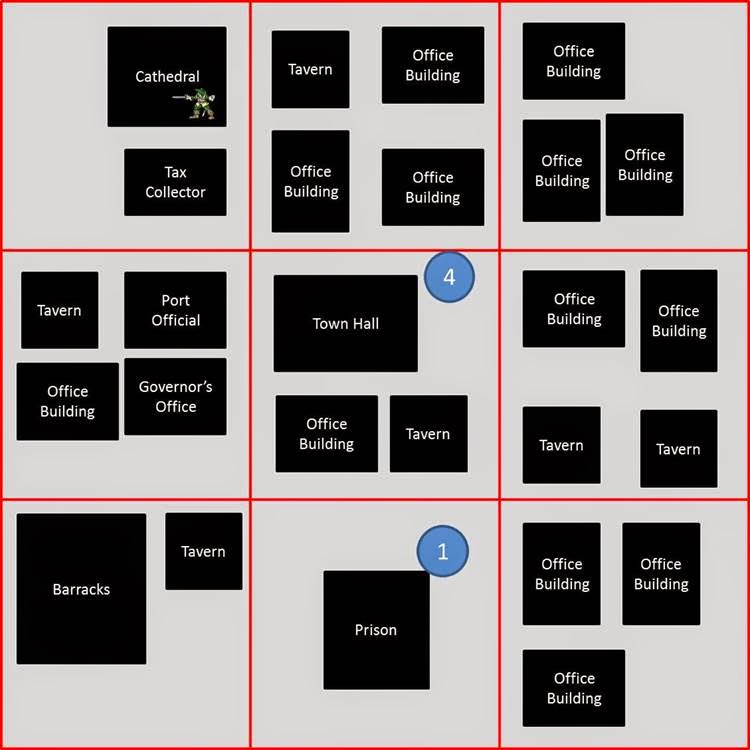 Time to meet Anton, the Northern Bishop, friend of the Cardinal.

Posted by Ed the THW Guy at 15:58
Email ThisBlogThis!Share to TwitterShare to FacebookShare to Pinterest
Labels: AARs, By Savvy and Steel, New Market Round, The Message, Two Hour RPGs, Two Hour Wargames