As Arthur stews in jail, Dion has a night on the town with his new friend Paulina.

Here's how we got to to where we are. One of the PEFs resolved during the duel was a single Mover. Another roll, a Nobleman's Wife. I had Dion take a People Challenge and he rolled really well, her really bad, and she was swept off her feet. This meant she could be Recruited so I decided to have her husband away on business and an excuse for another Encounter.

I rolled up the where at, etc. and got the Docks Area. I decided to play a little cards, so Dion and Paulina made their way to the Bawdy House for an evening of gambling. Here's the table, PEFs, and how they got there. Note that I'm using Power Point and the Easy Table Rules. 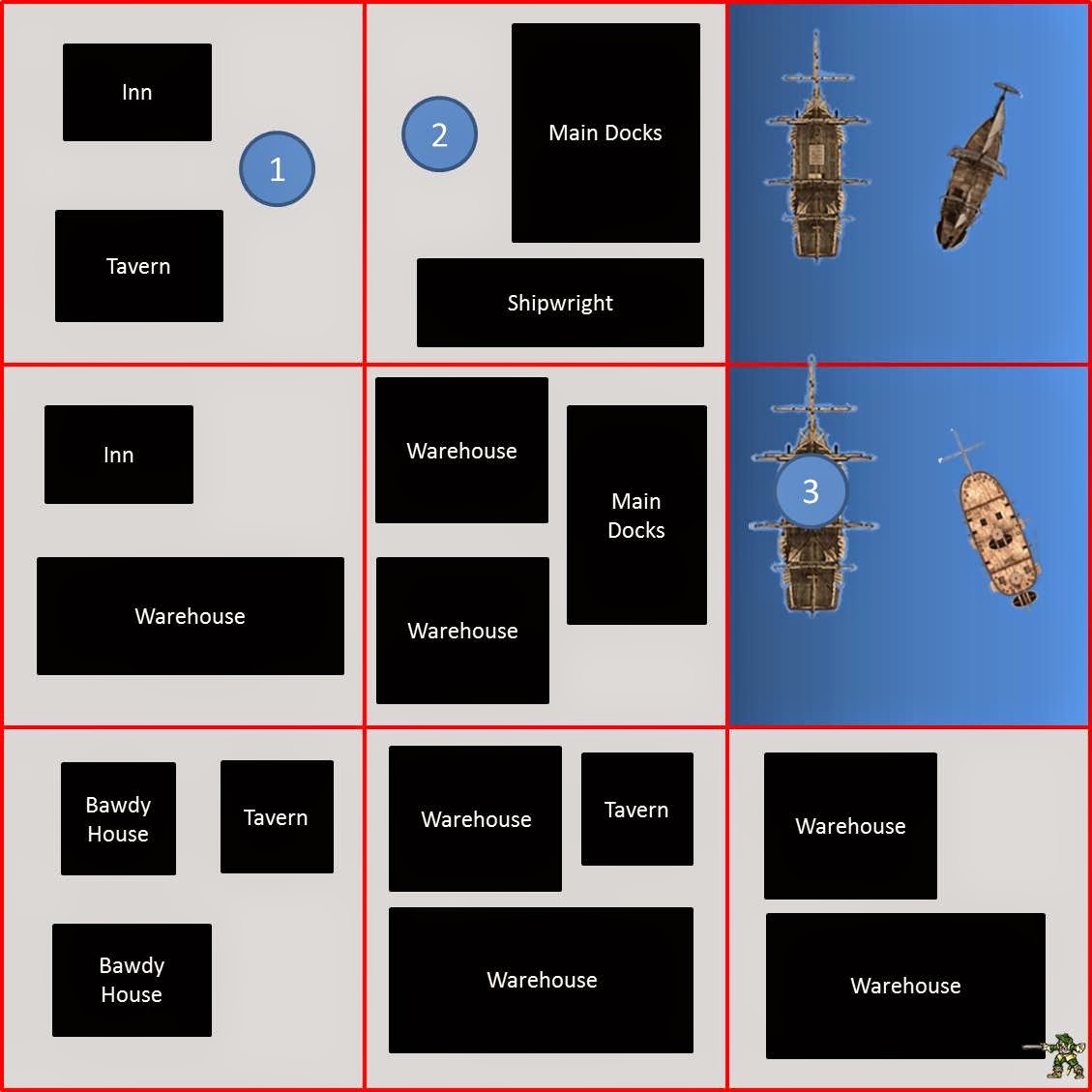 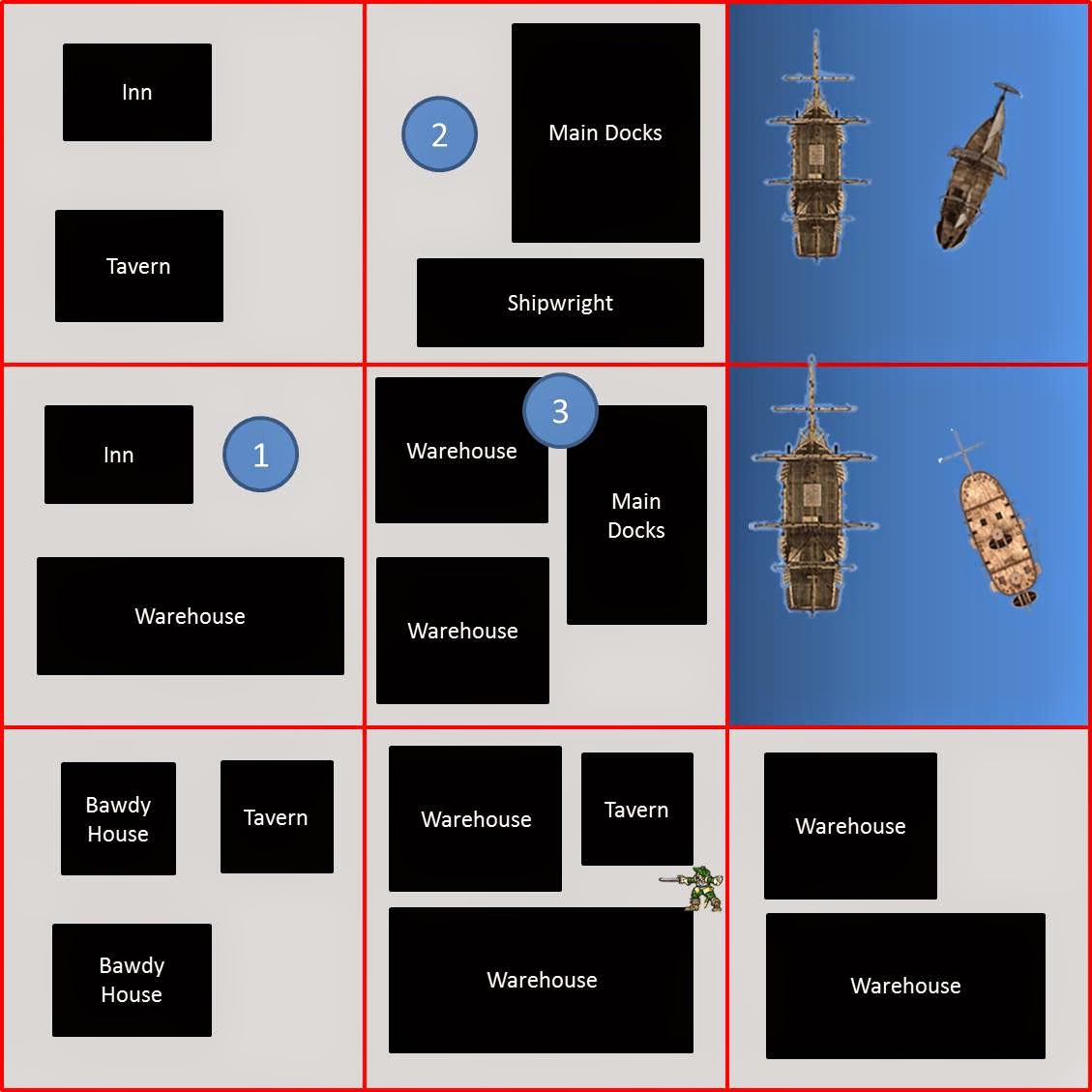 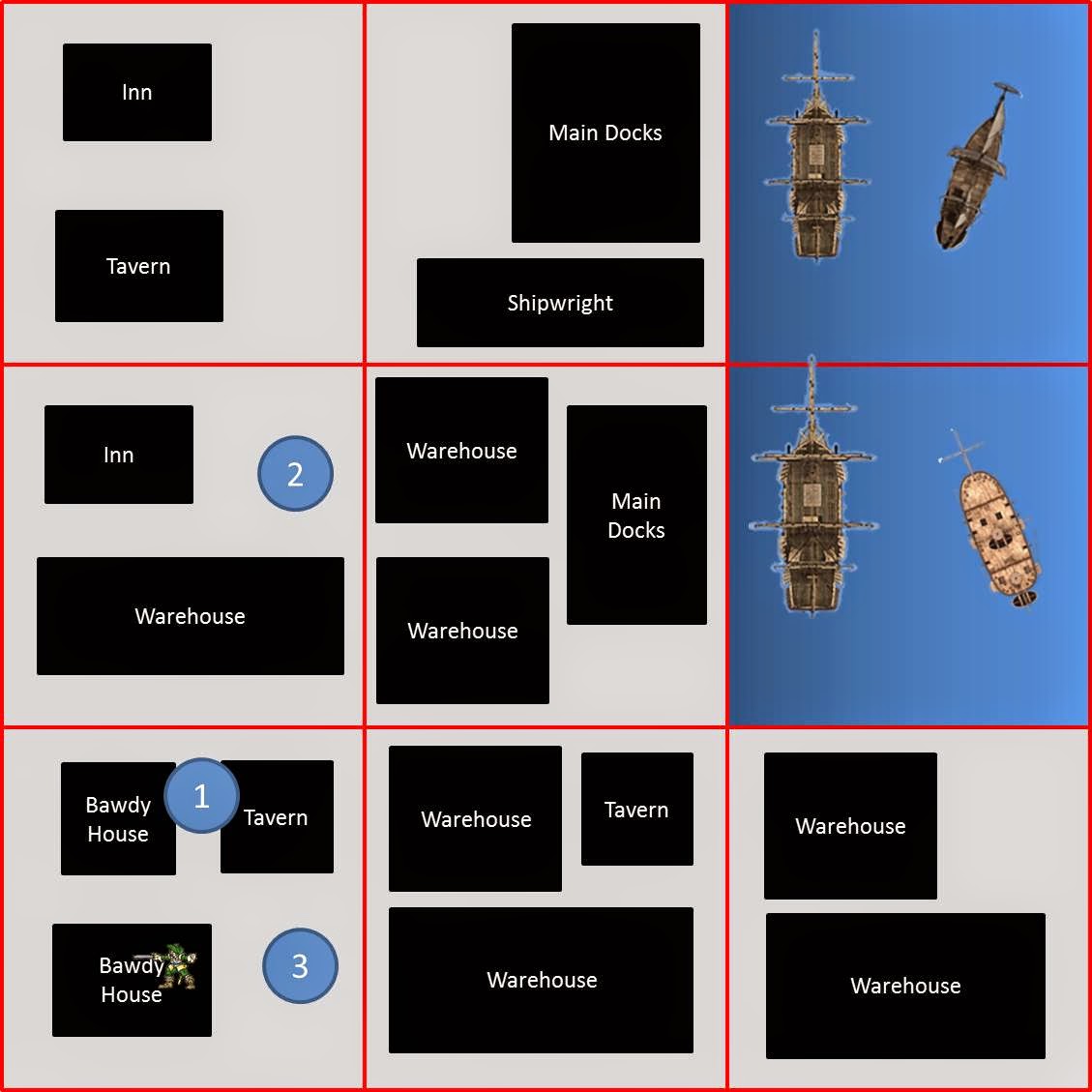 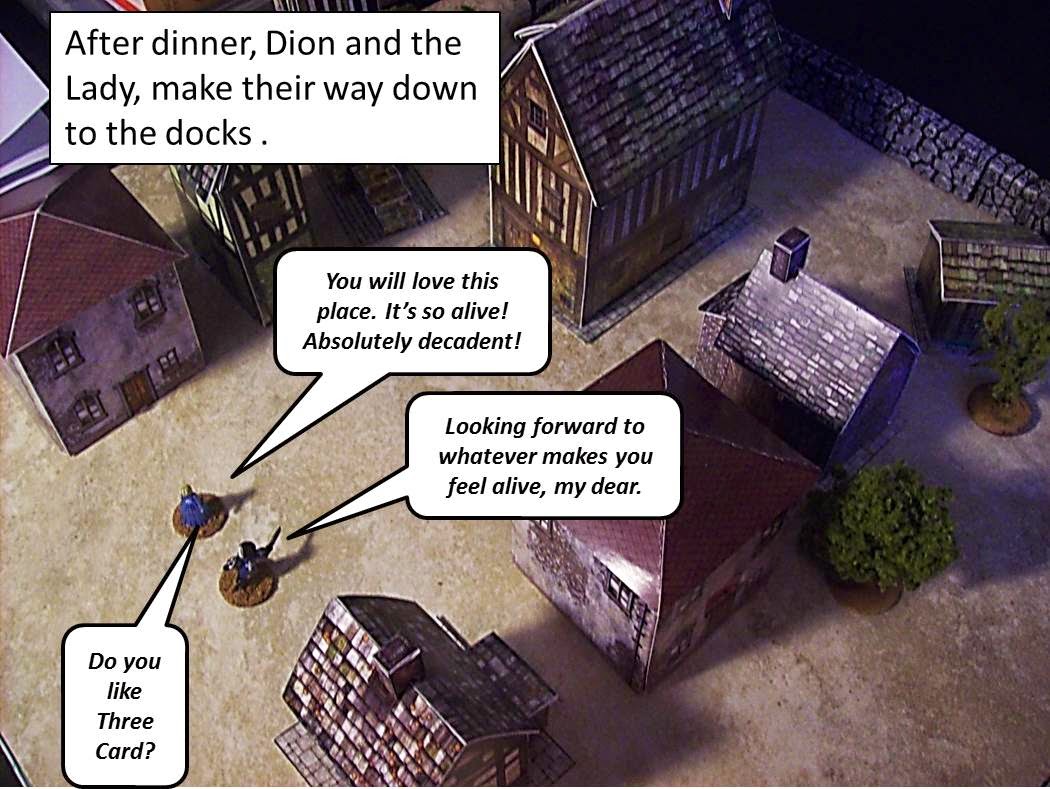 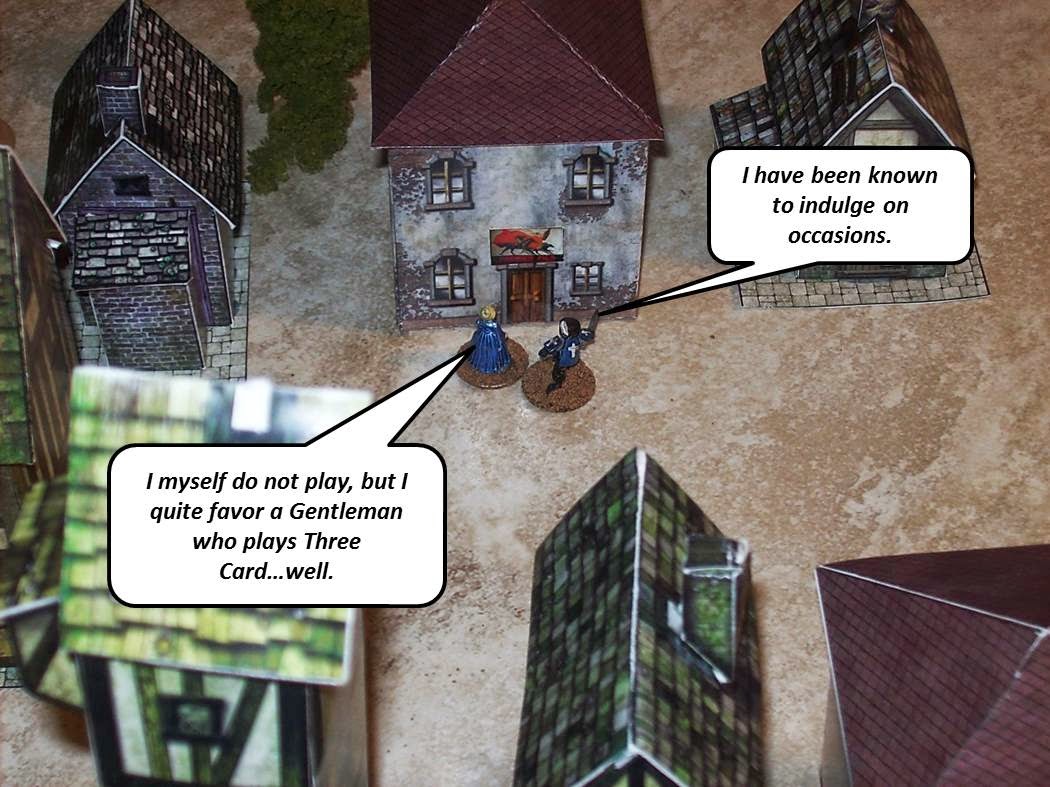 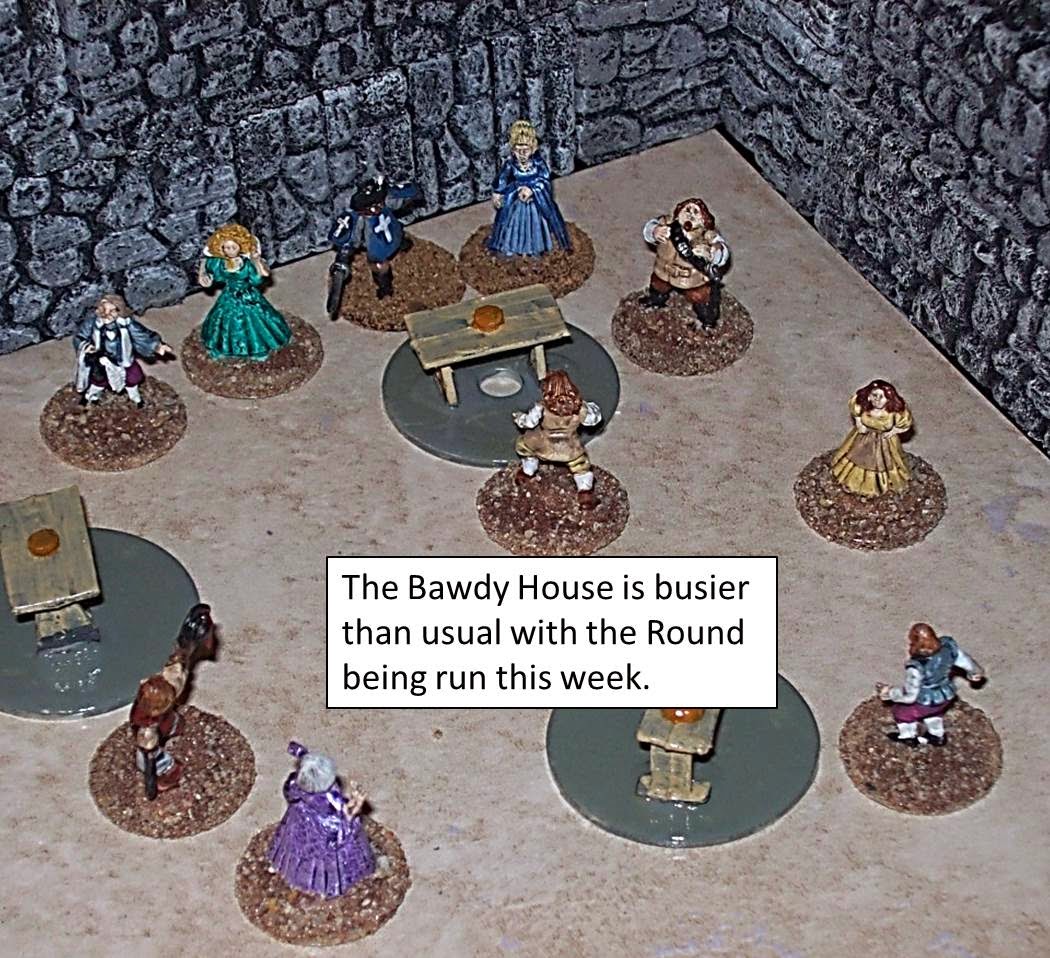 I took into account that with the annual New Market Round being run, many more people would be in town, mostly higher social types (Movers Shakers, and Exotics.) This accounted for the higher class of gents playing with Dion. I rolled for the number of NPC players, rolled their Stats, and noted them in the History I keep for Arthur and the boys. Any work I can do ahead of time, I do, and keep it, as it can eliminate doing it again in future Encounters. 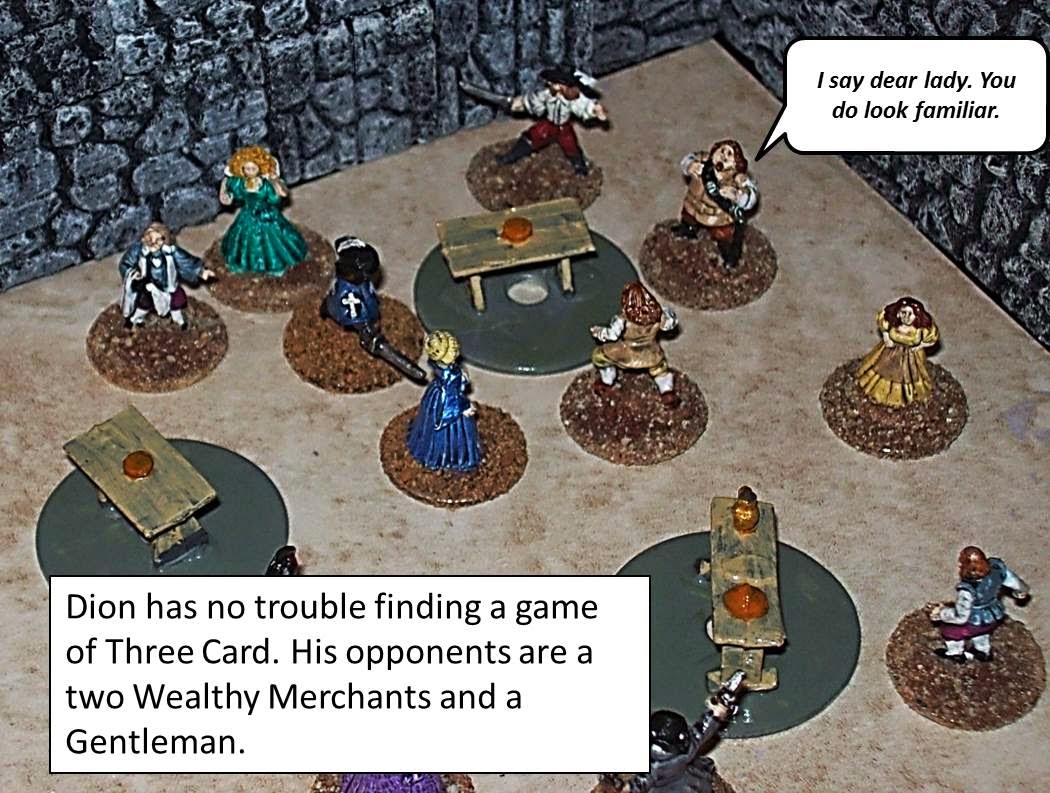 Here's a quick rundown on 3 Card.
All players ante up 1 Coin d6.
Each player is dealt 1 card per point of Rep, but no less than 3 cards. Lucky Bastards get 1 additional card.
The Players, not NPCs, build the best poker hand with three cards. Extra are discarded. They can choose to fold if they have a crappy hand or bet 1 more Coin d6 if they want to continue.
After all players have built hands and bet,  the NPCs have their hands built.
If they have an Ace or higher they stay in and bet 1 more Coin d6. If, not they fold.

This means the players build their hands without knowing what their opponents (NPCs) have. There's a chance of an NPC cheating, but in this case, none of them did. 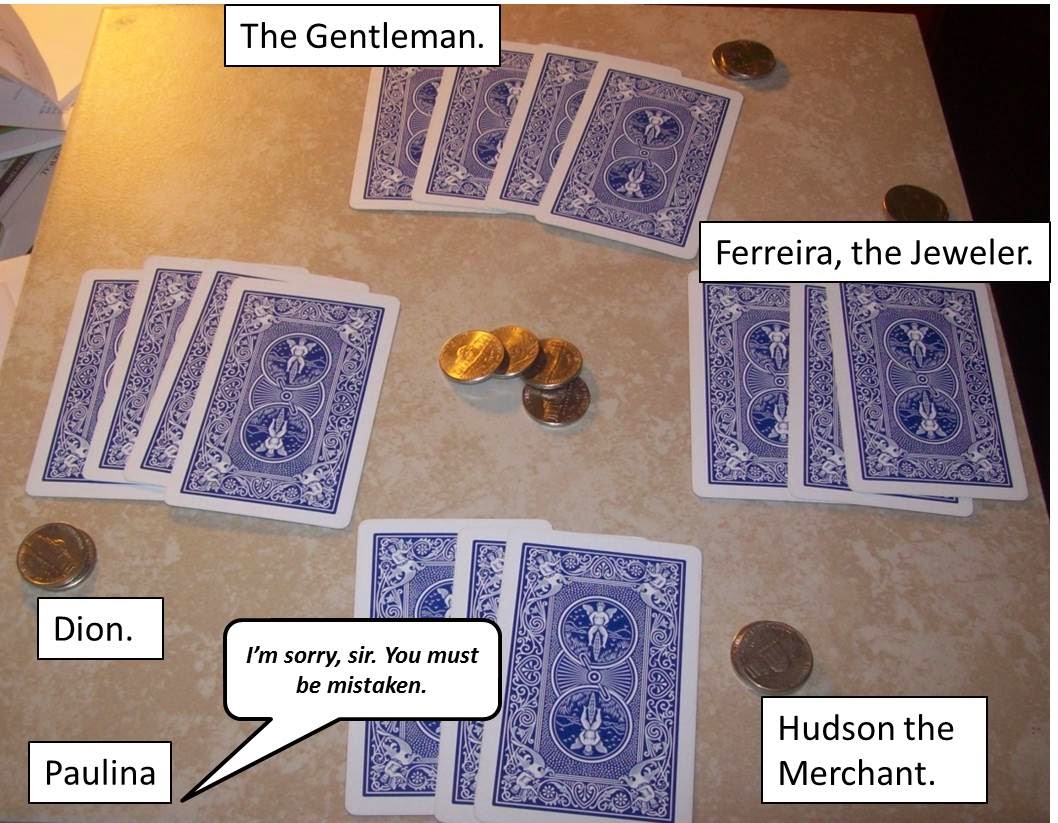 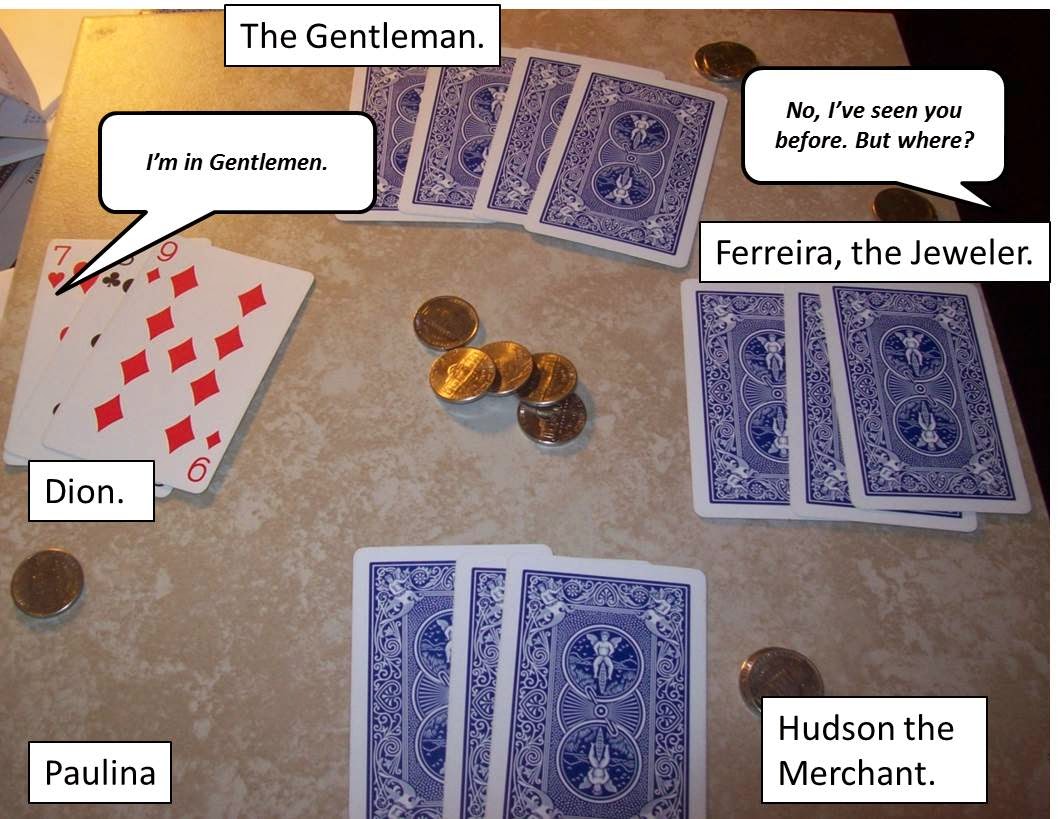 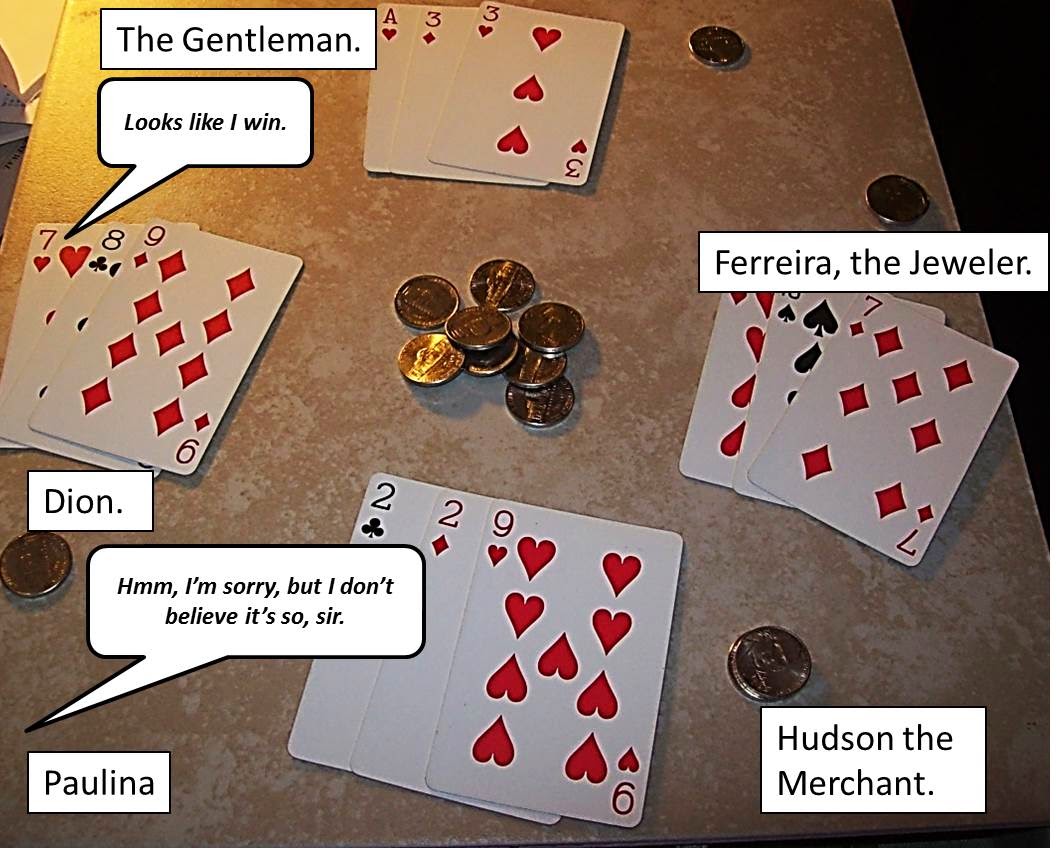 Dion wins with a 3 card straight, all the NPCs stayed in as they all had pairs. 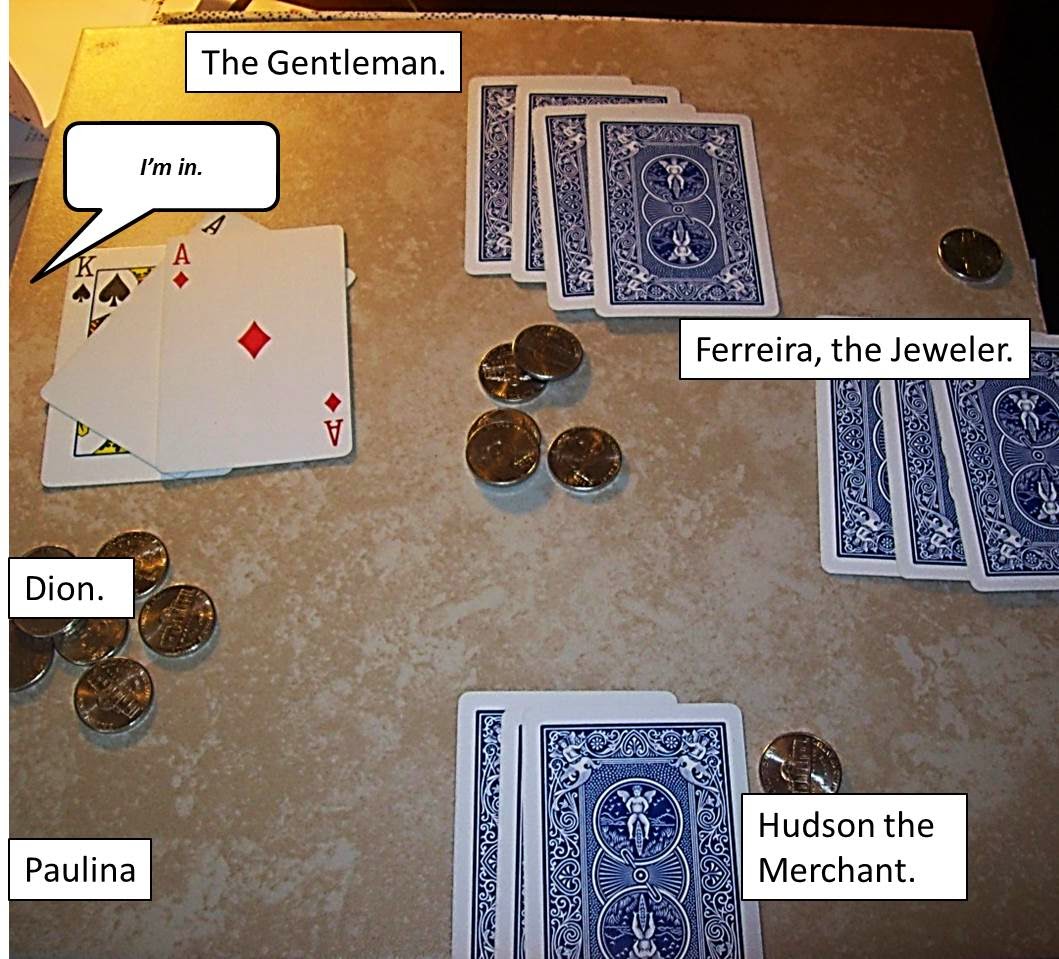 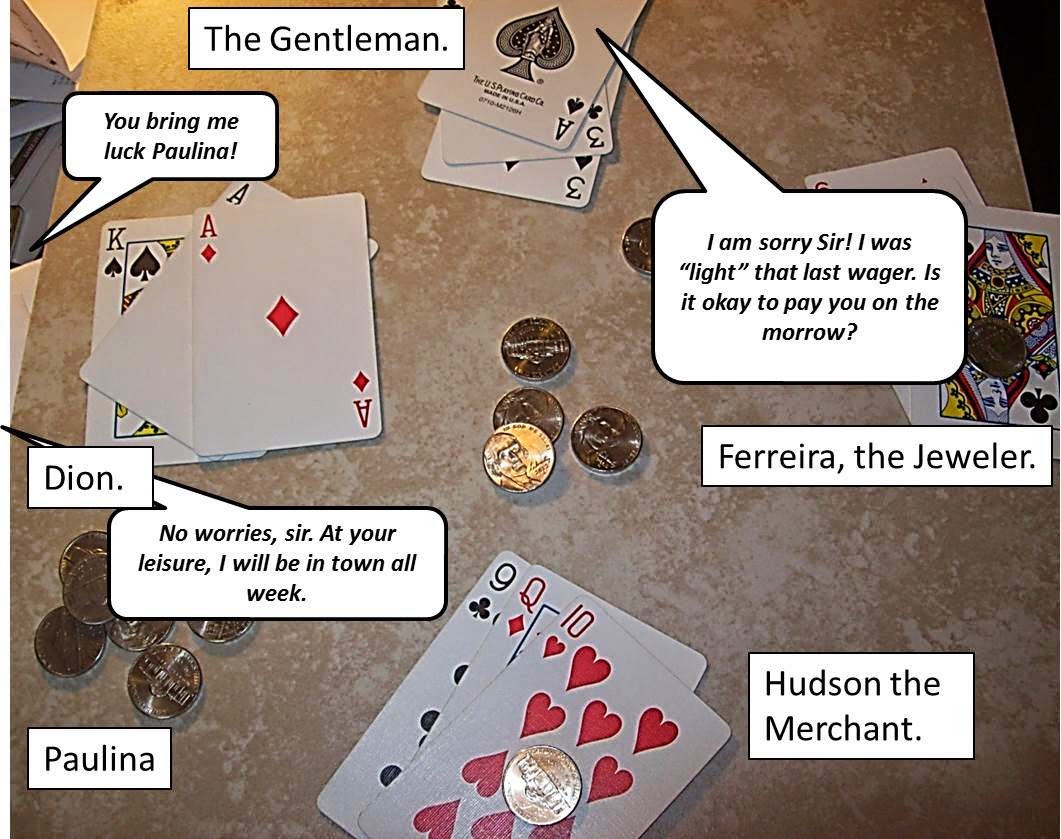 Next hand Dion won with 2 Aces. The Gentleman stayed in but went light on the pot. He lost so owes Dion 1 Coin d6. He's a gentlemen so Dion took him at his word.
The two other NPCs had bad hands so didn't make a second bet. 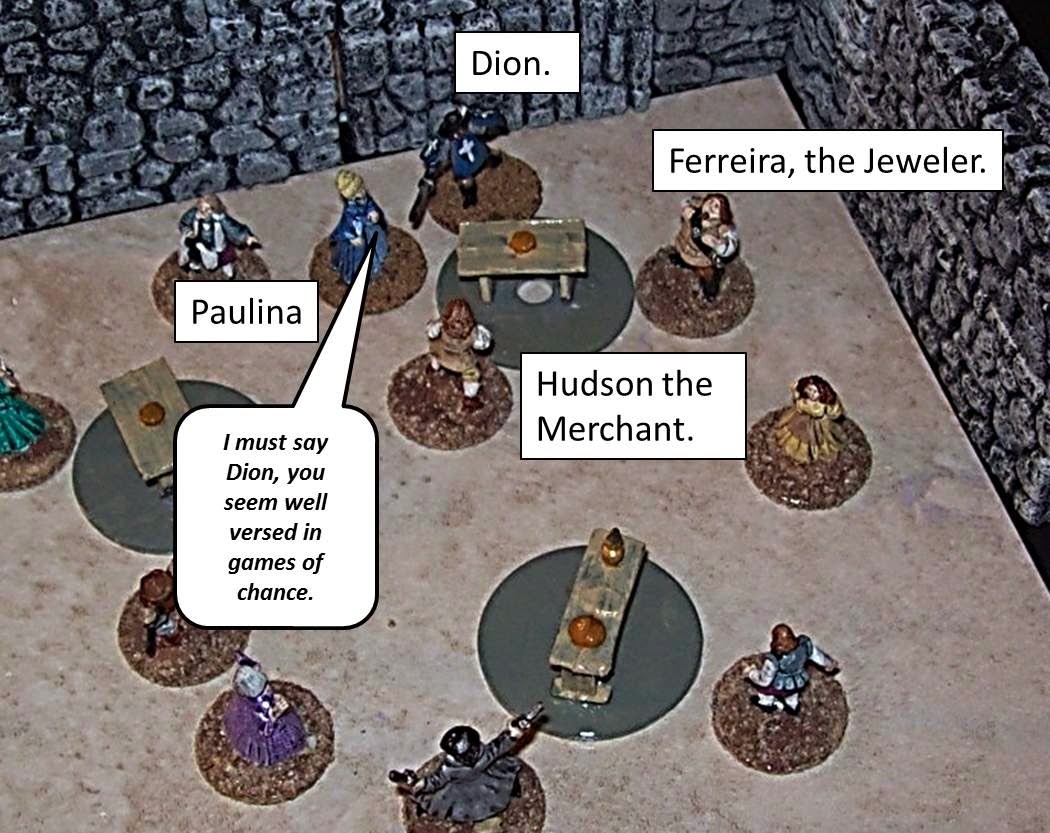 Here's the table after the Gentlemen left. 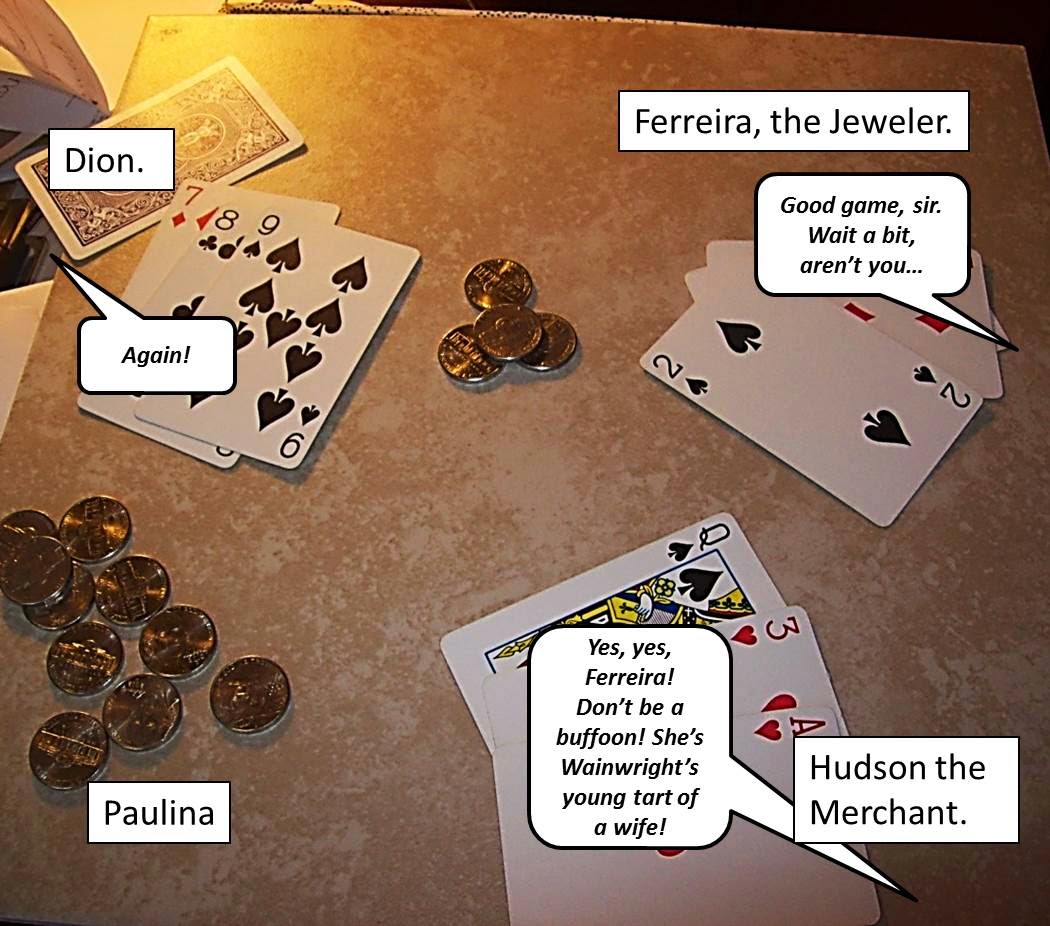 Dion one again. Three hands; two three card straights and a pair of aces? Okay, he really wasn't cheating, but it looks like it. As for the other NPCs commenting on Paulina? That was game driven. I rolled 1d6 at the start of the game to see if Dion had met these guys before, he hadn't. But then I thought, let's have them roll for Paulina, to see if they knew her. Well, Hudson did. She was rolled up as the wife of a merchant that is in Hudson's Circle of friends, 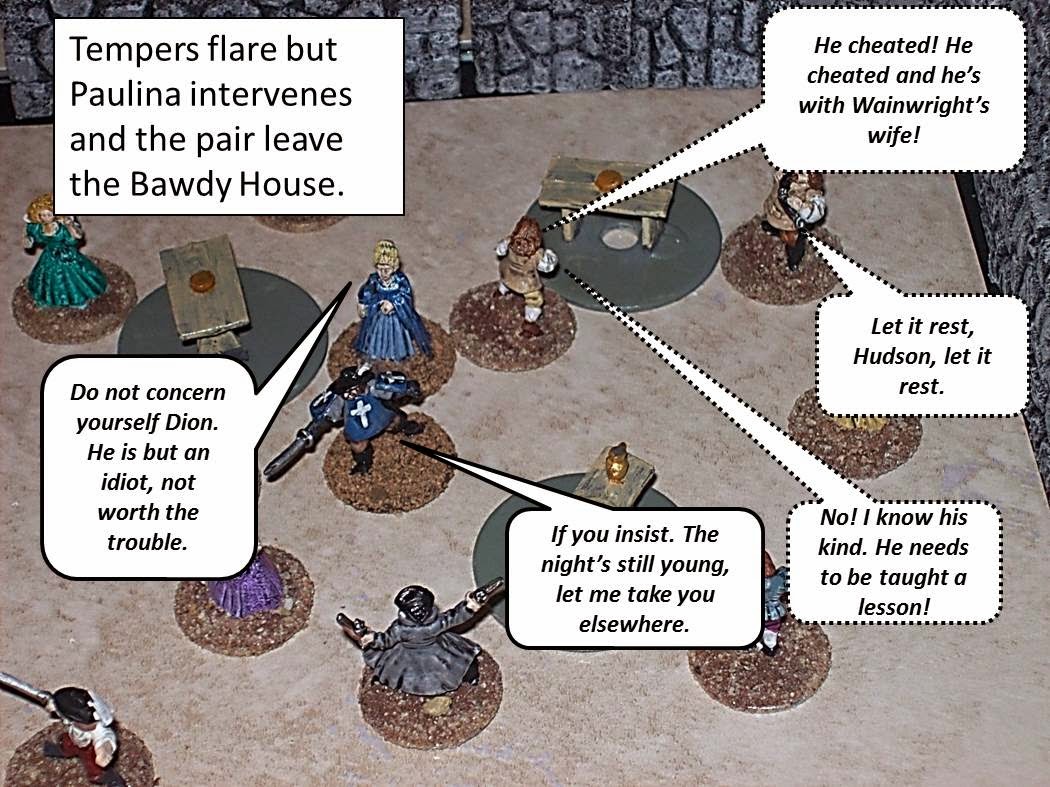 Hudson wouldn't fight a duel with Dion, he's not crazy. But he could possibly get revenge. If Dion has a Travel Encounter in New Market, and it comes up Confrontation, Hudson will be behind it.

90% of the whole Encounter was generated by the game mechanics.  And it may not be over, the pair have to exit the table and there are three PEFs floating around outside. Plus those that win at gambling in seedier areas have the possibility of being robbed.

Posted by Ed the THW Guy at 14:17
Email ThisBlogThis!Share to TwitterShare to FacebookShare to Pinterest
Labels: AARs, By Savvy and Steel, New Market Round, The Message, Two Hour RPGs, Two Hour Wargames