The Mayor of New Hope City has scheduled a meeting of the Area Council to discuss current events including the water referendum and the new Pub & Rec expansion.
In further news ...

*****************************
"I'm not buying that at all," Ashlynn said out loud.
Billy turned from the window and asked "What?"
"This BS about water referendum's and expansion,"  she continued. "This is about that kidnapping yesterday.  Nothing in the news about it?"
"It was just a kidnapping," Billy said insincerely."Happens every day."
"Not by Star Army," Ashlynn stopped. "Where you going?"
"Back in five minutes," Billy said as he left the hotel room. "Don't open the door until I get back."
Ashlynn pulled her BAP from the table and waited.
*******************************************
Here's a small AAR using 5150 Urban Renewal  and the investigation mechanics from New Hope City PI. Decided to get some use of the new Star Army and Razor Gang figures in 28mm to Kickstarter later this year. As a player you go into NHC PI with only your character. Everything else is dictated by the game. So when I rolled a Kidnapping as the crime, I was ready to go. Using the Star Army figures was cool, then I realized half way through that SA isn't allowed on New Hope. So there has to be a story behind this, as to why SA? And isn't that illegal?
So I figured to bring in Ashlynn Cooper and set a three day time frame to solve the case. Toss in Billy Pink as he has many NPCs generated from previous games and I'm good to go. 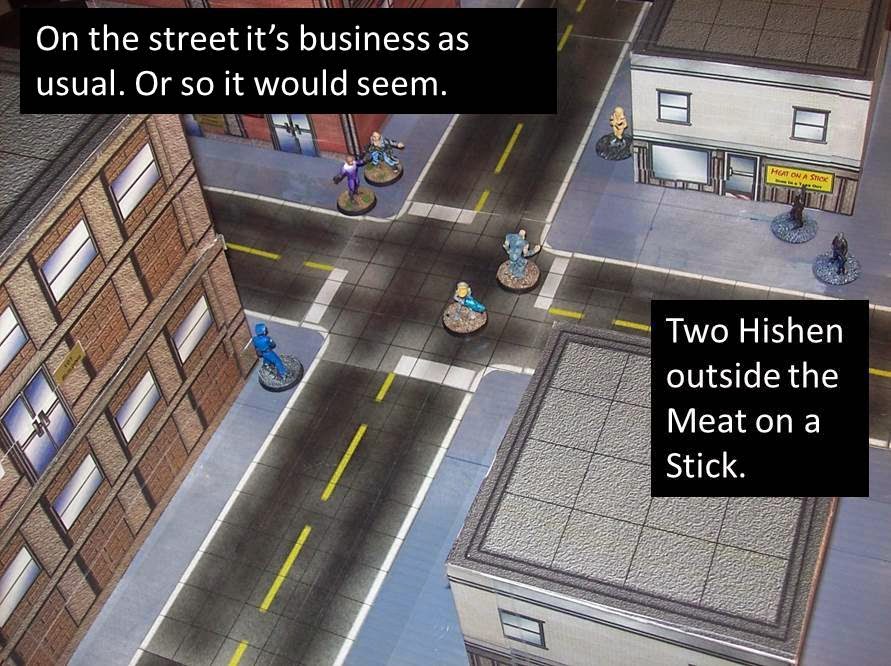 I know I have to question someone so decide to use two Hishen. Rolling the PEFs at random place the NPCs on the table. I use figures for looks. 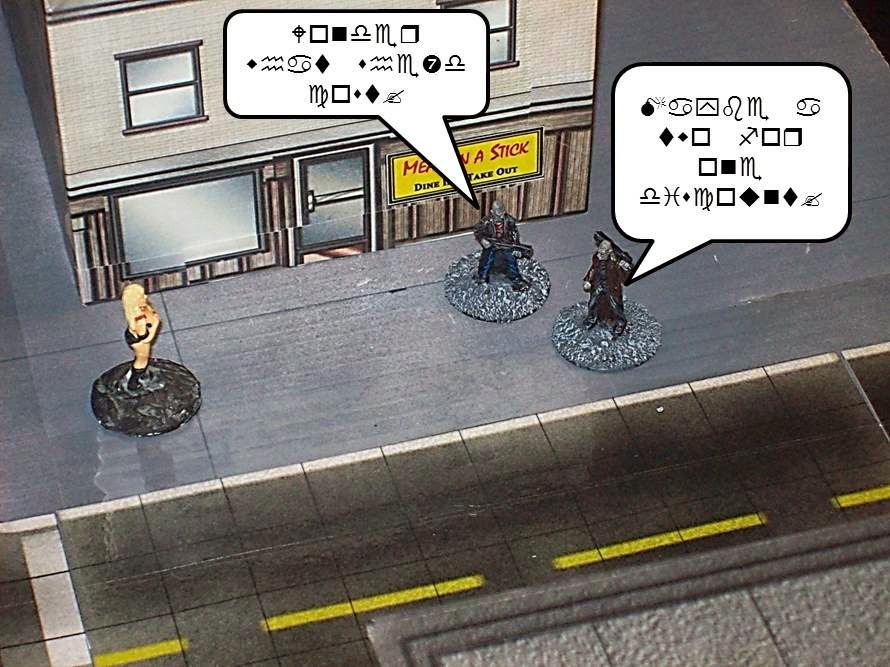 I know what I want to happen, Billy question the Hishen. but I also know they won't cooperate unless persuaded. So I'll need an Opposed Challenge to achieve this. Billy slips outside a back exit of the hotel. 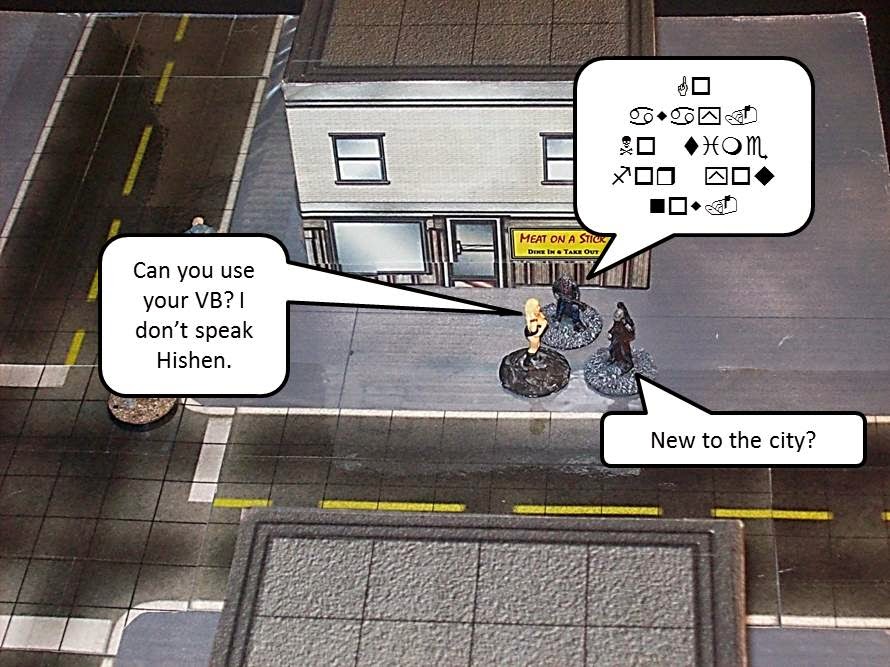 The Party Favor modifier will give Billy a +1d6 on the Challenge.  I can't buy them drinks, but I can distract them. Looking on Billy's Character Journal I see the perfect distraction. A short time later the distraction shows up. 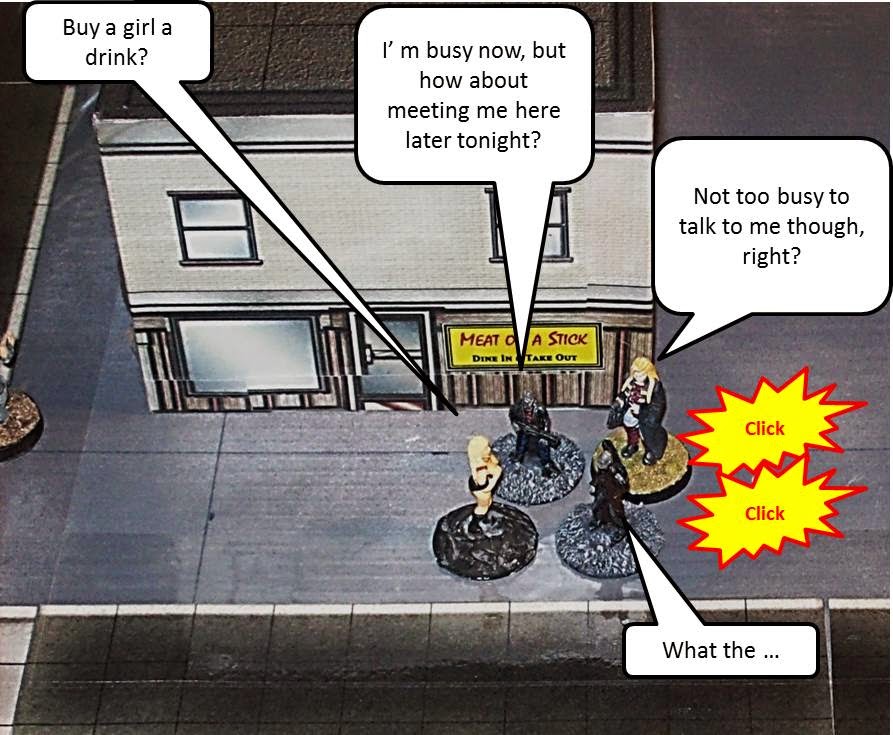 I move Billy out of LOS of the Hishen, and around behind them. The Challenge is taken with Billy counting +1d6 for the Party Favor (distraction) and +2d6 for having weapons drawn and they do not. BAPs in the back. 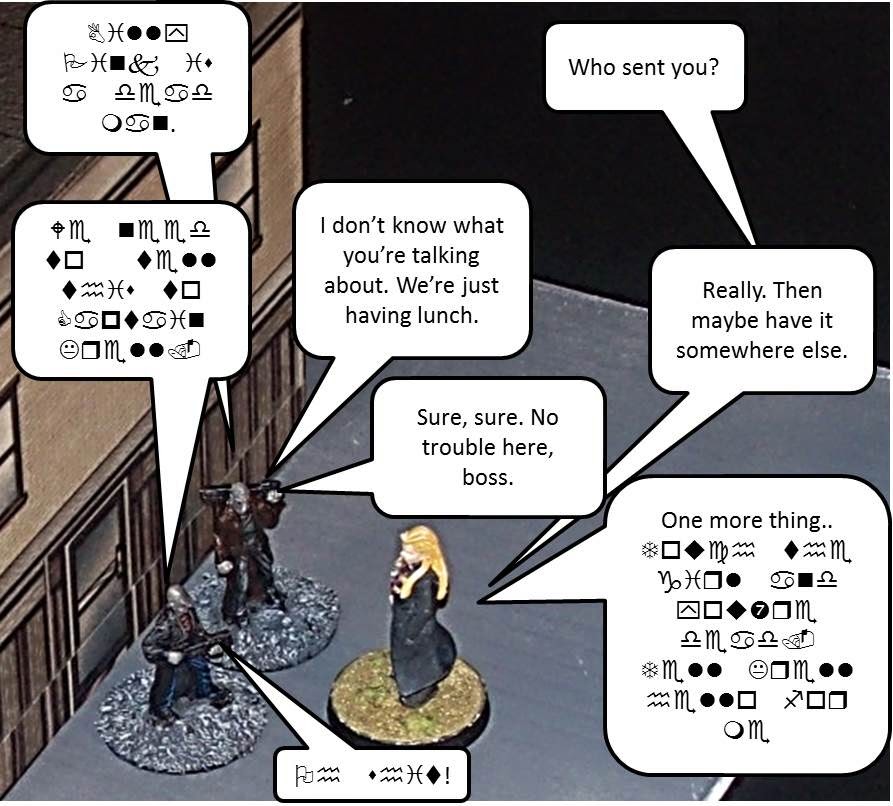 Time to take them into the alley while "babe" acts as lookout. While this is going on the NPCs are moving about using the NPC Movement Table. Why bother? Because it adds an element of surprise to the game. Not sure if you saw the cop on the other side of the street but I did and he was moving towards Meat on a Stick.

I use the Questioning Table in NHC PI (page 49) to question the Hishen and succeed in solving a Clue. It's pretty easy when you have your gun out and they don't. Which reminds me, I have to find out how many Clues I need to solve (NHC PI page). That's 2+1/d6 times 2 for a Kidnapping. Dang, 10 clues, the maximum. 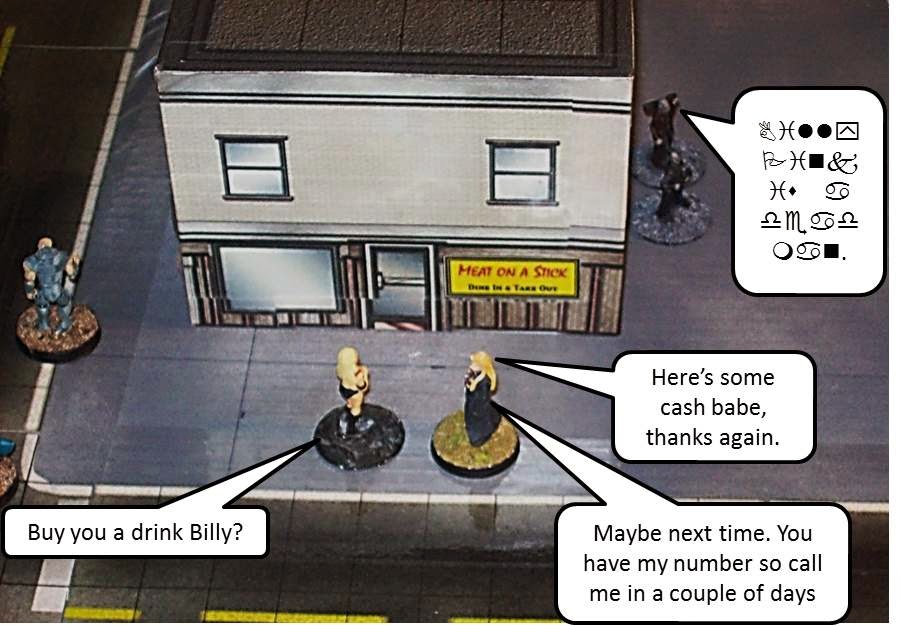 So the Encounter is over, the Hishen aren't going to do anything in the daylight and in public. At least not yet. So the first clue Billy solves is a name, Captain Krell. I roll 1d6 and score a "4". Why? Because in Urban Renewal there's a chance that when you meet an NPC, you have met them before. If I had rolled a "1", Billy would have known Krell. Even though he didn't meet him this time, he heard the name, so resulted in a roll.