And a Bottle of Rum - Boarding!

Here's a AAR describing how boarding actions work in And a Bottle of Rum. But before we get to that let's go over how the Contact section works.

It all starts with the Campaign Map. There are two in Rum, a Caribbean one and a Lemuria one. In this case I was using the Caribbean Map. My English Pirate was in Area 8 (white number) with an Area Activity Level of 3 (red number). Looking at the yellow boxes should many Spanish Settlements, so probably Spanish ships would be encountered. 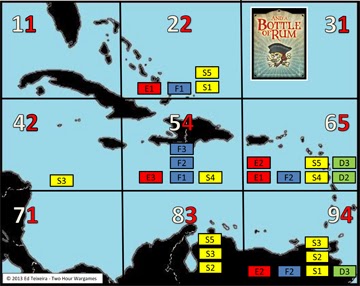 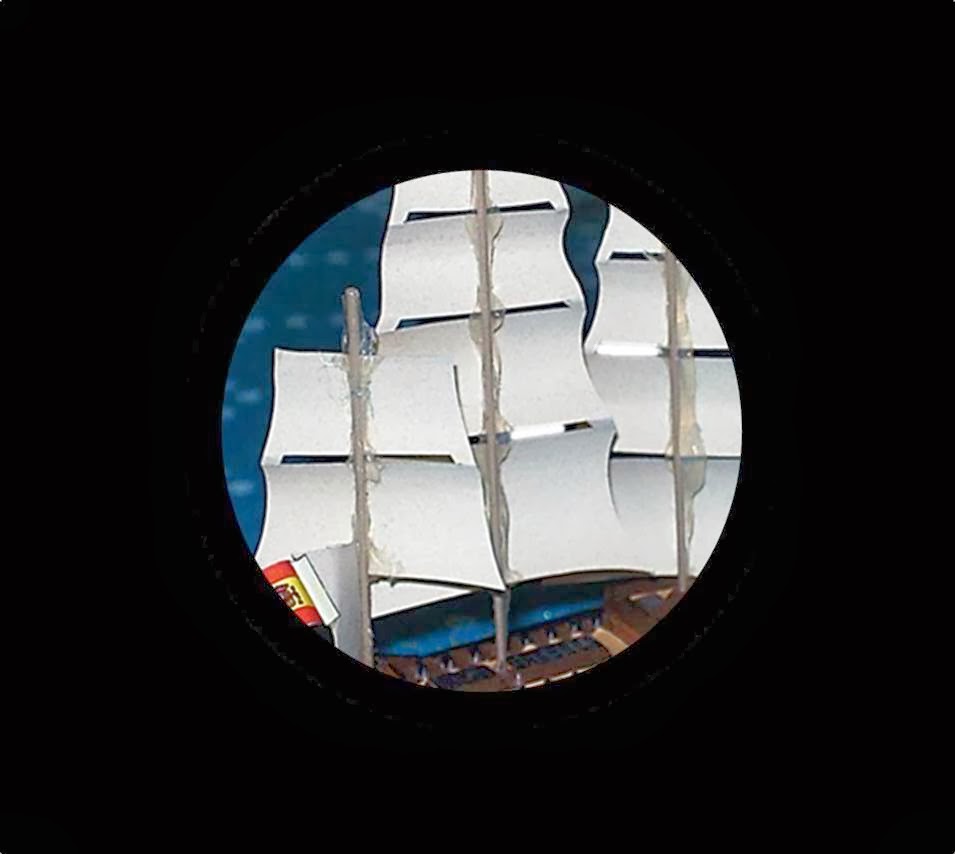 Next I rolled to see how many were out there (1), what size it as (3rd Rate Merchant), and id it was a Pirate or National. It was Spanish!

Once contact is established, and before we go to the table, both sides roll to see what their reaction would be. Non-Player merchant swill always attempt to Flee. If successful the merchant escapes and the ships are never placed on the table.

As a Pirate, I wanted to Fight. Now it was time to see who Gained the Advantage, and dictated the encounter. To do this we take the Maneuver Rating of each ship (its sailing ability) and add the Rep of the Crew (their ability to sail). This gives each ship a specific number of d6, one for each of the total scored. Dice are rolled, successes counted, and the one with the most decides it it's Fight of Flee.

I scored more so the merchant would have to fight. 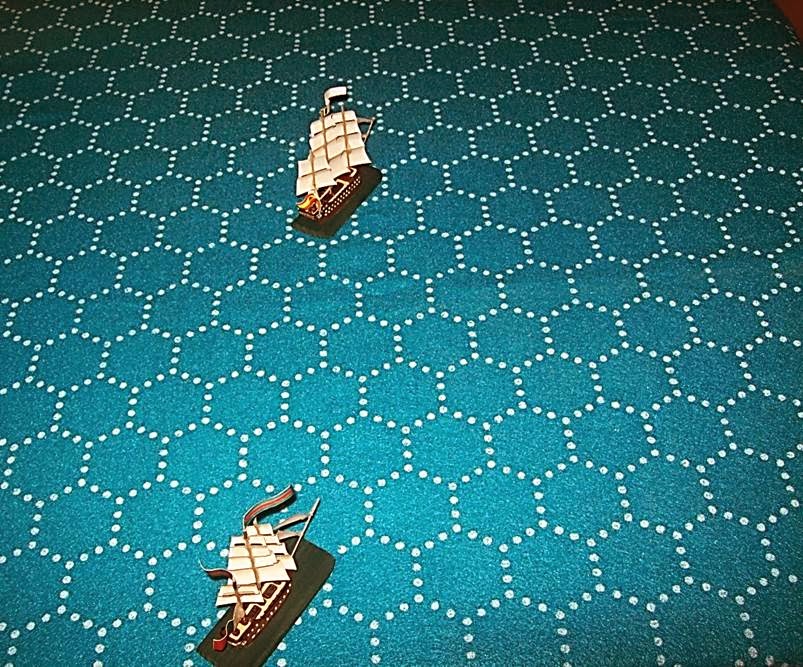 The target ship (merchant) is placed in the center of the table facing a random direction. In Area 8 the wind blows from the East and luckily the merchant was placed in its Broad Reach. It would be moving 6" per turn (3 hexes).
I could place my ship anywhere on the table but no closer than 15" from the target ship. I placed it 8 hexes away (16") in a chase position. My ship would be moving 10" per turn (5 hexes). I would catch the ship!

Note that I chose to use hexes but the game plays just as well without. 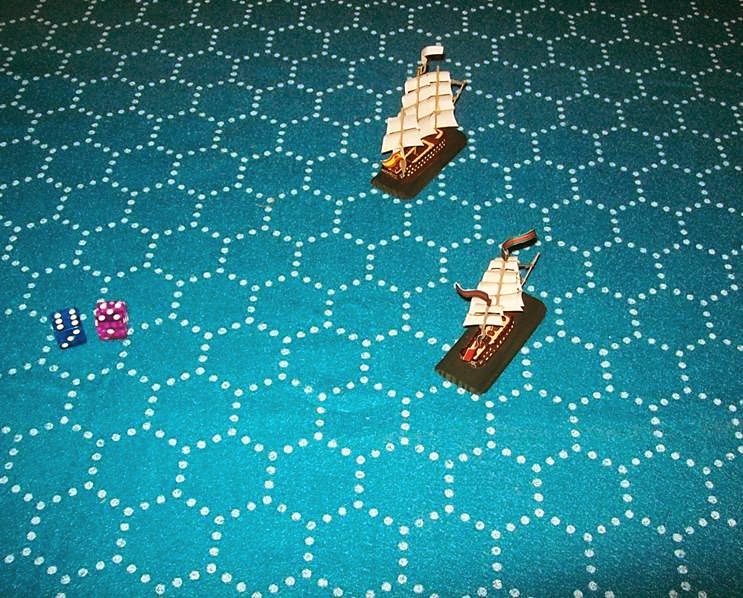 Activation dice are rolled at the start of the turn to determine the sequence of movement and firing. No action occurred, I just kept closing the distance. 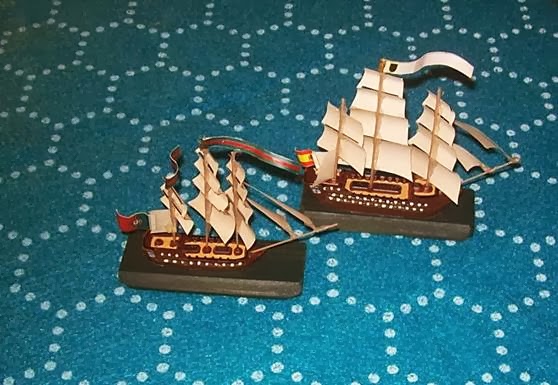 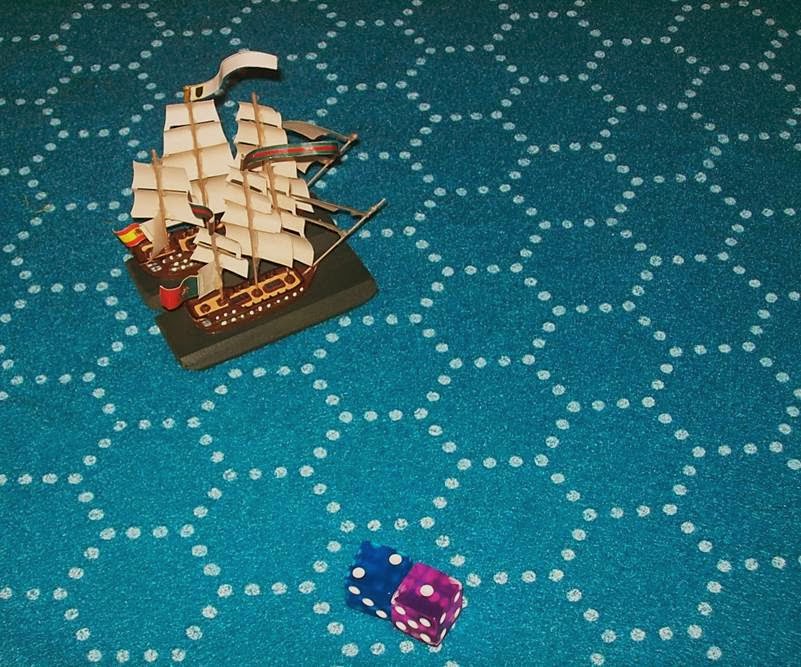 Eventually I caught up to the merchant and I was lucky, I had the advantage of activating first. This meant the merchant would move first, then I could move (allowing me to react to their move) then I would be able to grapple/fire/board first before they could. 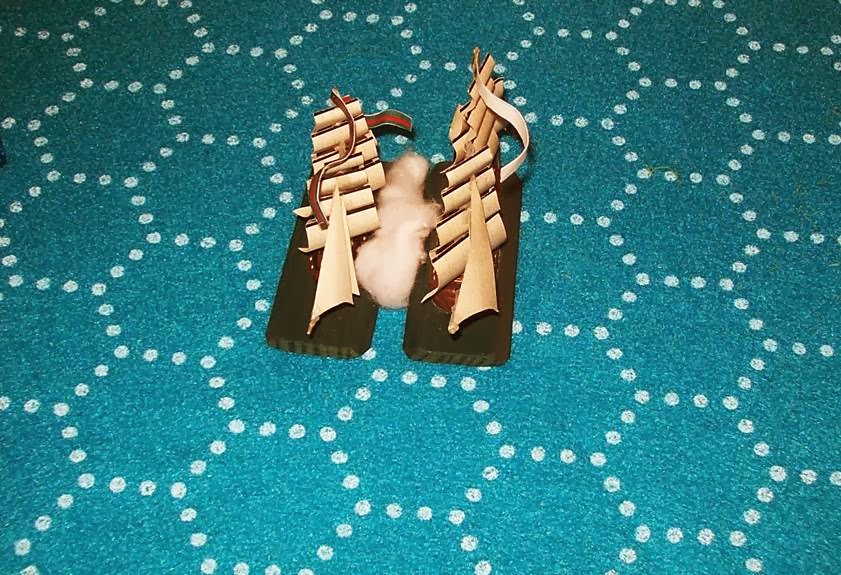 After the merchant moved my ship moved into contact, we rolled to grapple (succeeded) and fired a broadside into the merchant. With a whoop it was time to board!

PART TWO
Posted by Ed the THW Guy at 17:00
Email ThisBlogThis!Share to TwitterShare to FacebookShare to Pinterest
Labels: AARs, And a Bottle of Rum, Two Hour RPGs, Two Hour Wargames