Here’s a series of AARs using the recently released 5150 New Beginnings - Urban Renewal and the upcoming Machinas. I know where I want this story to go but instead of just setting up a one-off Encounter,   I’m going to use Urban Renewal to get there. Let’s see how it works out.

I start the story without anything being known before hand. Not the who, where or what. All I know for sure is that Billy Pink is my character and everything else will be generated by the rules!

First we start with the section called “Looking For Work”; found in Urban Renewal. 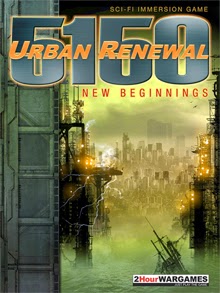 “Hello, my name is Orfal Gleek and I represent Omega Lending Partners. This is a message for you, Mr. Pinkerton. This is in regards to your past due payments. I understand your desire to keep a stellar Credit Rating but we must have payment by noon Monday at one of our local offices. Please return…”

Billy tuned out the message center and turned on his computer. Logging in, he ran through the outstanding job offers. Plugging in, Billy downloaded the info on the offer and headed for the shower. It had been a long time since he’d made a “Tommy Run” and they didn’t come up very often, but he could use the Cash. He’d need some outside help for this one, if he got the job. Billy smiled as he showered, “I’ll get the job”.
*********************************************
In “Looking For Work” you can choose this as a Voluntary Encounter. Mechanics are simple. Roll 1d6, subtract the score from the character’s Rep. That’s how many jobs that are available. Billy has two to choose from, one is a pretty good fit to what I want to do.

Rolling on the Circle Table gives me a Smuggler. I roll 1d6 and score a “3”. If I had scored a “1” it would have been Tatiana, a Smuggler Billy has history with. Not good history.

I look on the Where Are They Table to see where the meeting will go down. It’s in the Pub & Rec Area and another bit of dice rolling. “3”; the meeting will take place at the Convention Center. Okay, I decide there’s a Top Tier Fight Night going on so will meet the Employer there.

Now here’s where the system works for you. I have to get from the Financial District, where Billy lives, to the Pub & Rec Area to meet the Employer. Taking the train (page 62) Billy has three potential Encounters before reaching the Pub & Rec Area. Then a Chillin’ Encounter to hook up with the Smuggler. There’s two ways to look at it.

The first is, that’s a lot of work. Maybe I should just jump to the “Tommy Run”. The other way to look at it is there’s an overall story going on here; let’s milk it for all it’s worth. If I had two hours to play, I’d jump right to the “Tommy Run”. But I can play a little, break it off at a natural break then pick it up at a later time. I decide on the second way. Also, Billy Pink has a pretty extensive bit of history in New Hope City so it’s always interesting when he hits the streets.

Each Encounter can last from 15 minutes to maybe an hour. I’m in no rush to play so start with Billy on the train. He’ll be going in the Day Time Day Part, then I’ll have him spend some time hanging out until the Evening Day Part, when he can meet the Employer and watch the fight.

Here’s a great shortcut to use with Urban Renewal and NHC, PI. Instead of setting up the table for each Encounter roll as much info as you can before doing so. Billy has three stops on the way to Pub & Rec. There is a chance (1) of a Traveling Encounter at each stop. I roll 1d6, three times and don’t score any ones so Billy doesn’t have any Encounters on the way there.