Plodd Redux: It's All On The Cards!

Just wanted to give you all a look at how the test game can be played right on the cards.

This is the same encounter as last time. Rifleorc Plodd, cut off from his unit, must forge ahead into unknown territory in order to lose the pursuing enemy light infantry.

Instead of laying out the terrain as it was generated this time figures were deployed and moved on the cards.

Sorry for the photo quality but I shot these using my phone rather than my camera in the interest of "fast play". Indeed this game, along with the time to layout the board and take the photos, lasted less than 15 minutes. I played the same encounter two more times afterward. 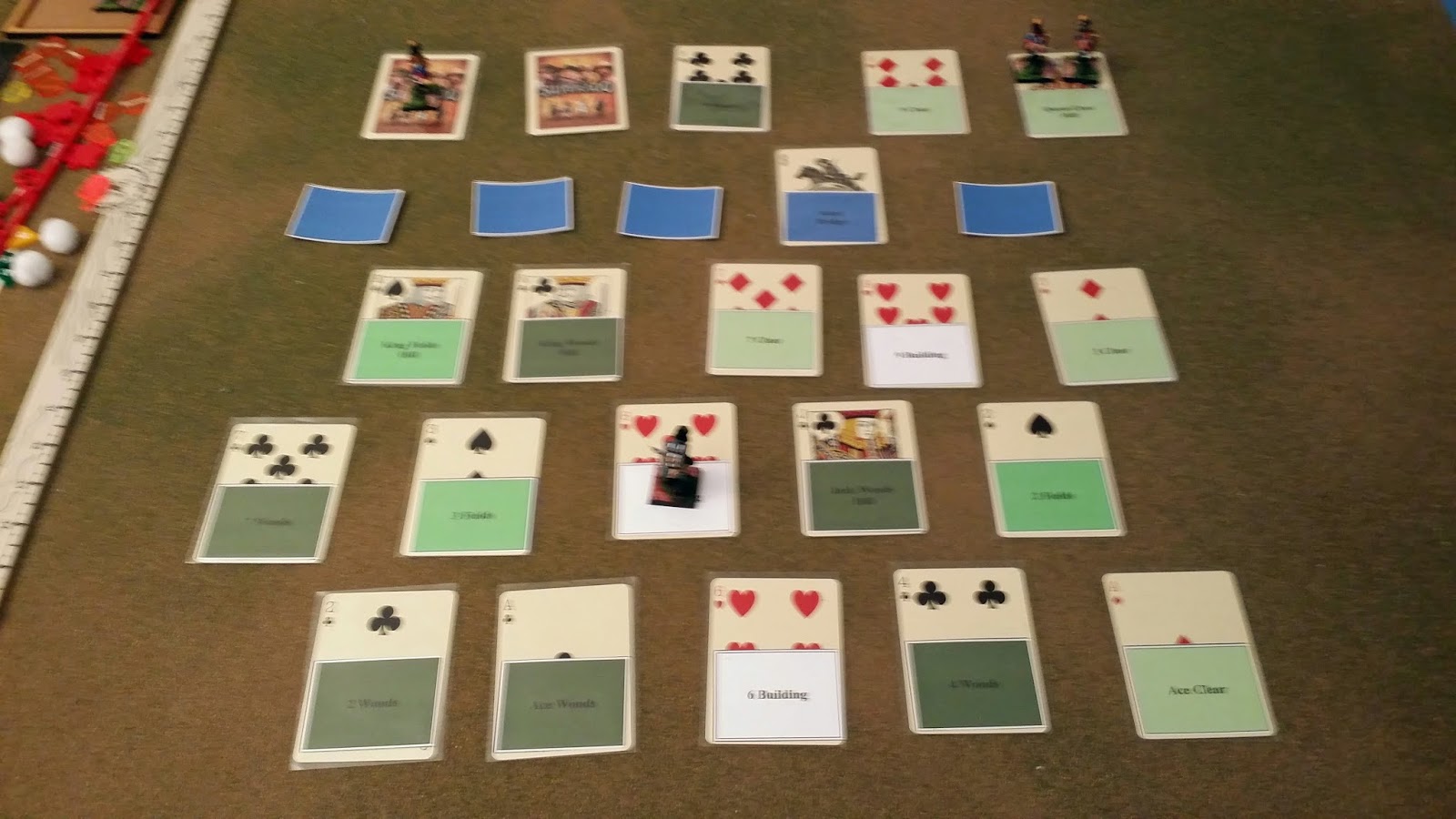 Here we see we see the situation at the end of the first turn. Plodd has taken shelter in  building that gave him a view of the terrain ahead. Unfortunately that terrain included a river with only on way across it, a bridge. Three Possible Elven Forces (PEF!) are fannying about in the distance. One on the left on terrain yet unseen and the other two on the right behind a hill. 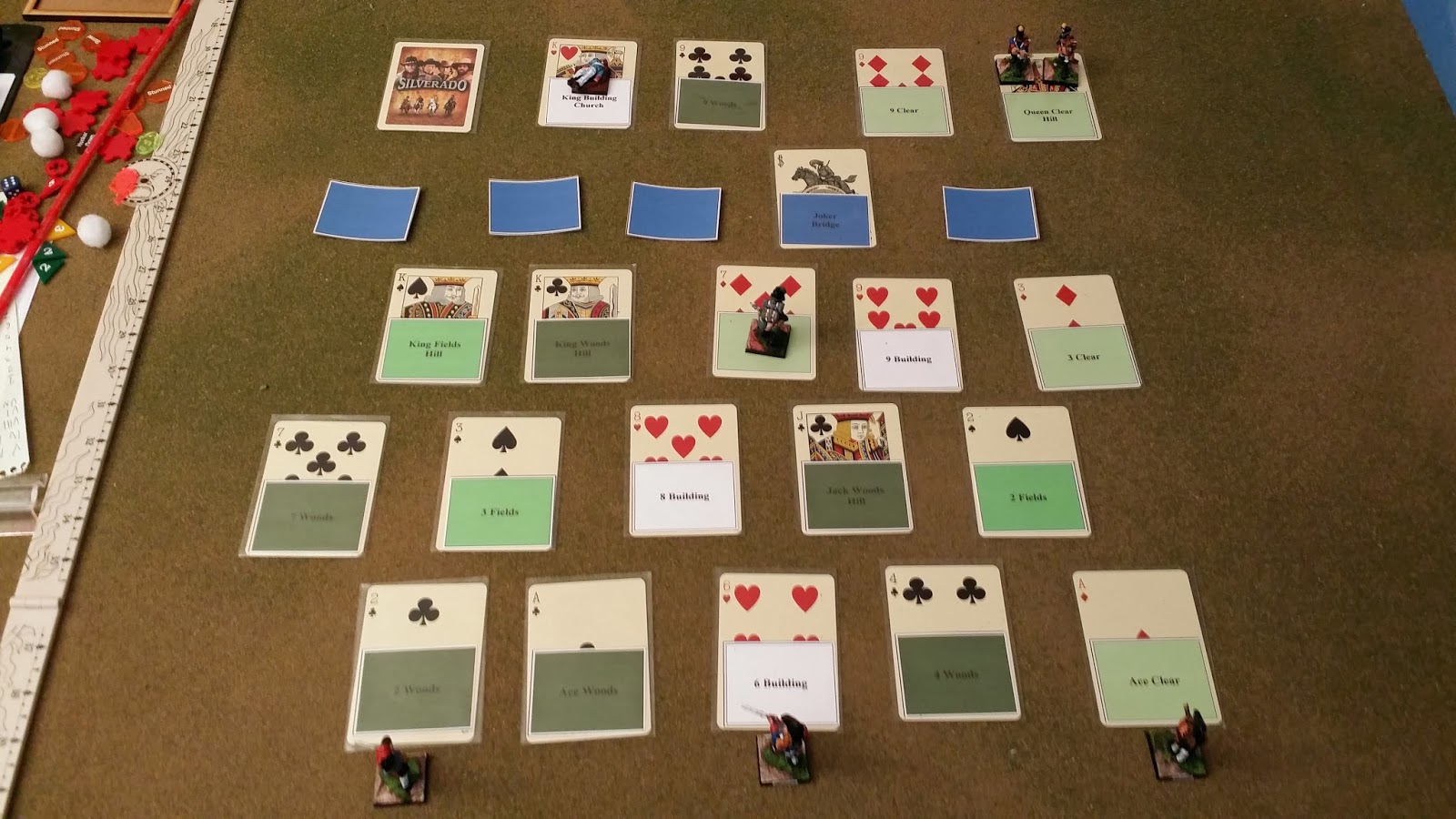 Plodd continues his advance as the pursuing light infantry appear on his baseline.
As Plodd move into some clear terrain, the left hand PEF moved into a church and opened fire.
It turned out to be a single line infantry figure and Plodd was fortunate enough to shoot him dead with return fire. 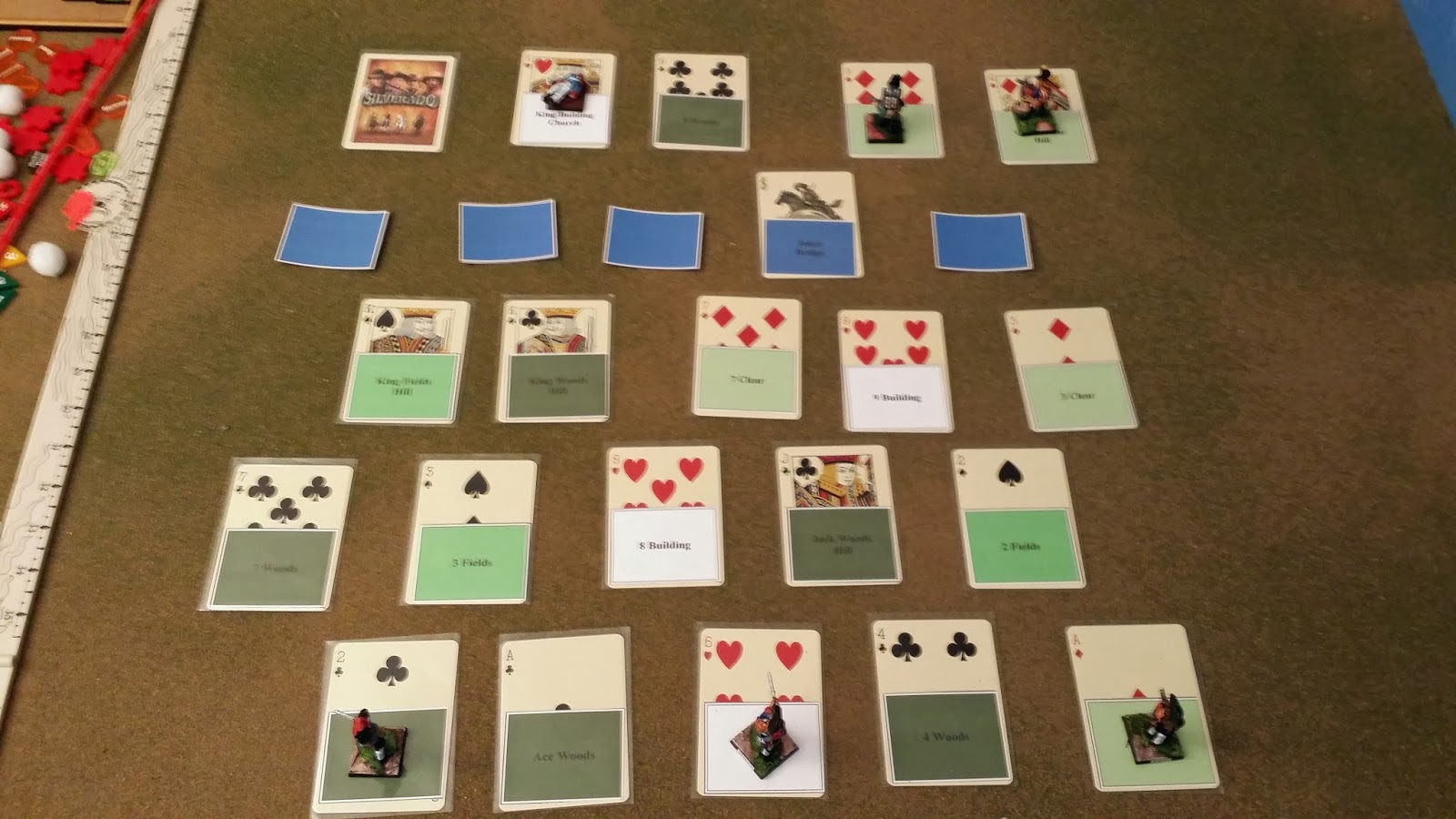 Now Plodd has made a dash across the bridge and into the clear terrain beyond it. Opportunities for fast moving are somewhat rare in this game as it requires two stretches of open terrain, or a bridge, adjacent to one another. Couple that with the rather exposed situation in which it places the fast mover and you have a recipe for caution.

One of the PEF's behind the hill turned out to be a false alarm. The other, however, was indeed an enemy who promptly shot poor Plodd. Again, without the use of Hero Dice, Plodd would have been done for. As it happened though he managed to survive, losing one Hero Dice in the process. 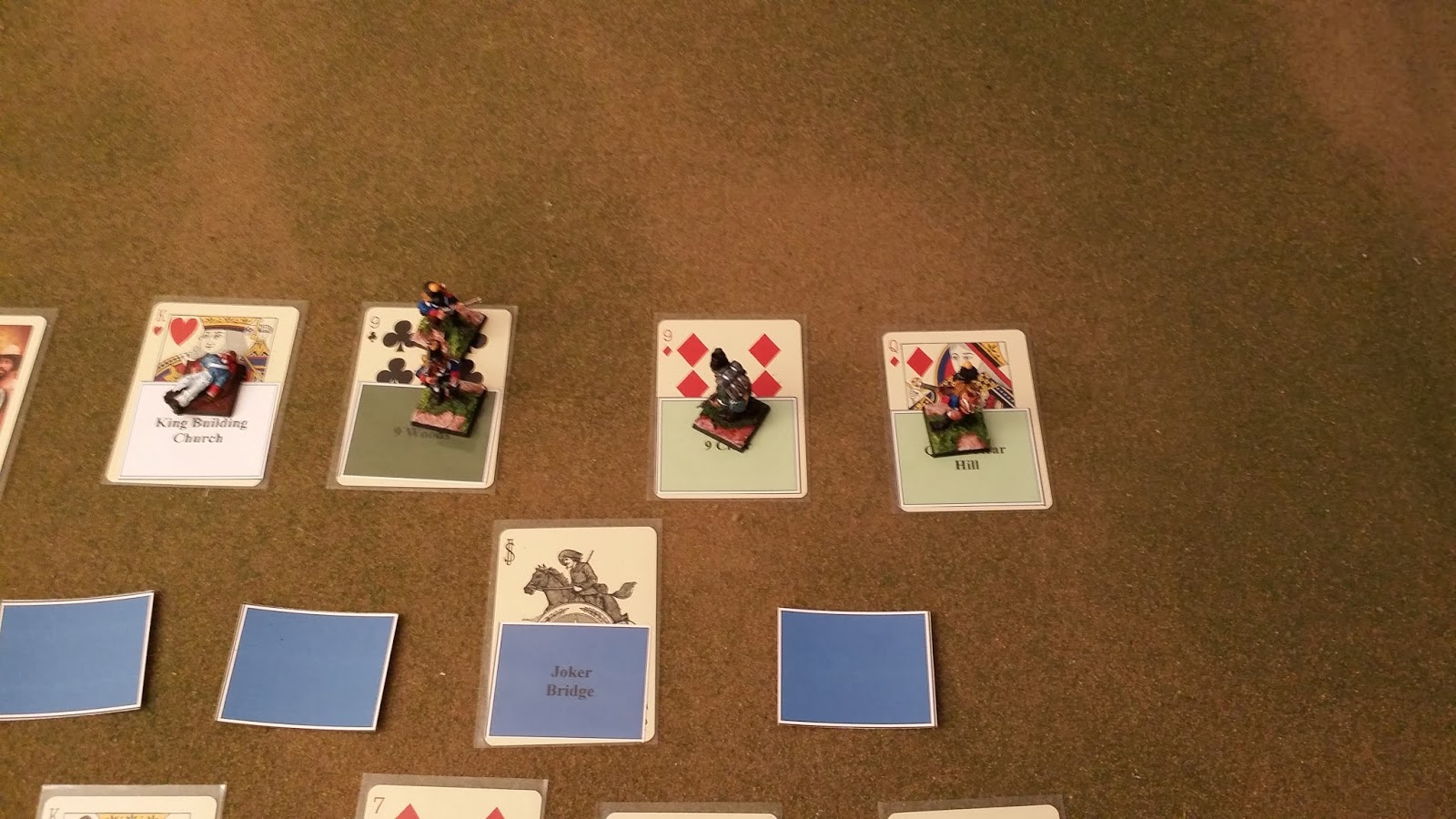 Just when it seemed that Plodd was in the clear, another PEF appeared to his left, and promptly resolved into two line infantry. More shots were exchanged. 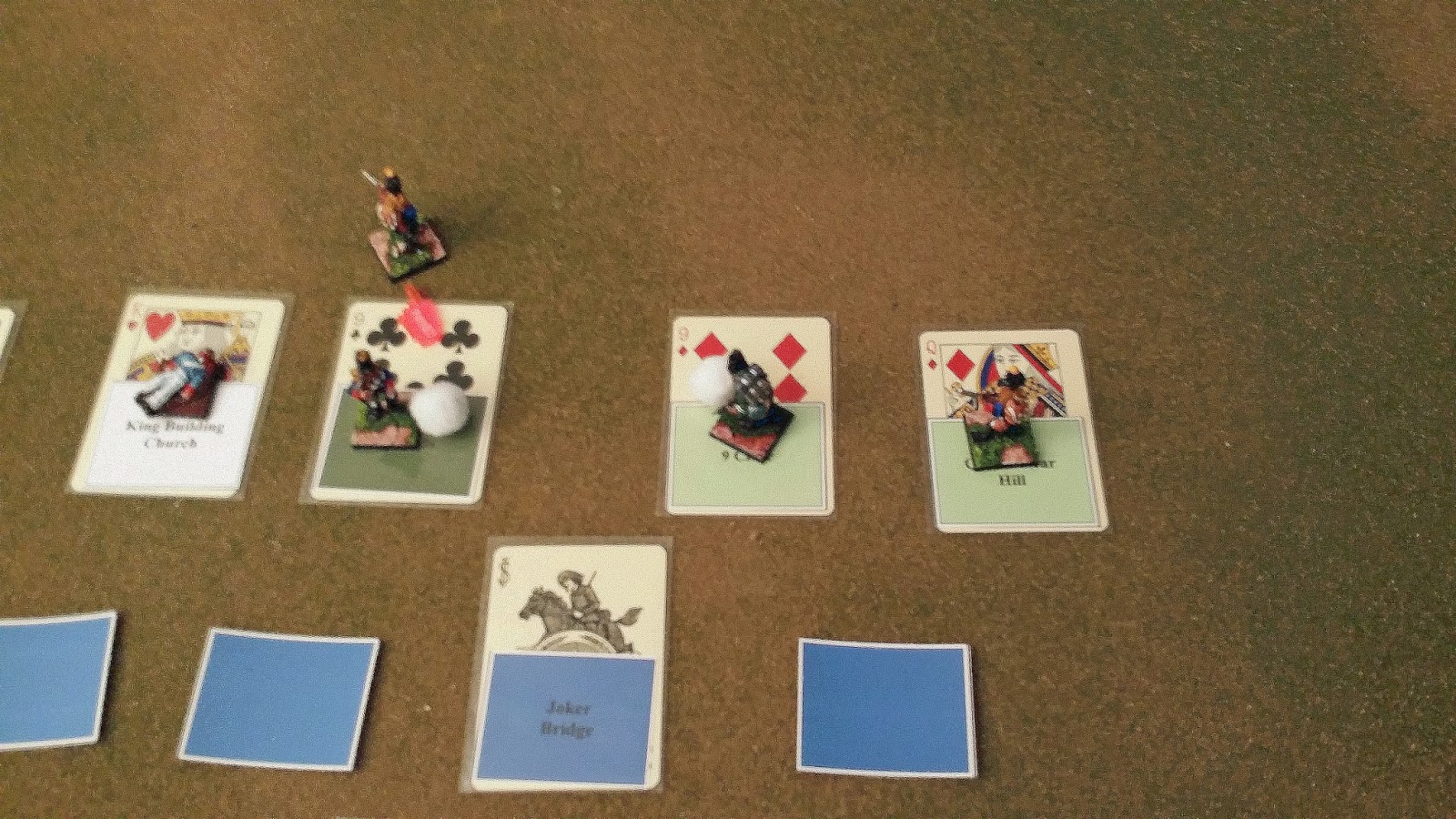 Plodd was hit twice more, and again was saved by Hero Dice, losing one more this time. His return fire missed but did send one elf packing. At this point, there was nothing to prevent Plodd from exiting and he did so. Job done.

As mentioned above this was followed by two more games. In the second game Plodd managed to escape again, even though his rifle misfired on its first shot. Once again he was hit once or twice and save by his Hero Dice.

In the third game, Plodd was overwhelmed by something line 10 enemy soldiers, converging from multiple directions. He died game defending a cantina in a scene reminiscent of the end of "Butch Cassidy and the Sundance Kid".

Clearly this encounter is weighted in Plodd's favor. In that respect it would make a fine introductory scenario. Two Hour Wargames stalwarts may recall that we used that approach in the first edition of "Nuts!" although, I wouldn't claim those scenarios favored one side over the other.

The weighting also makes a fine campaign "hook". Start the solo player off as Plodd and have him or her sped the next few adventures wandering around Portugal or Spain trying to find The Peer's army.

Alternatly I could tone it down and make it more of a near run thing. Starting Plodd at Rep 4 or 3 rather than 5 would both decrease his survivability by reducing his Hero Dice and leave more room for advancing in Rep as well as Rank.

Regardless my object in presenting this report is to show that players with limited space, time, or both can still enjoy a game by using cards rather than tabletop terrain. The look of the thing certainly takes a hit, but so long as the play is the thing, good results can be had! Mind you that doesn't just apply to my game. Just about any game can be so adapted with a little imagination.