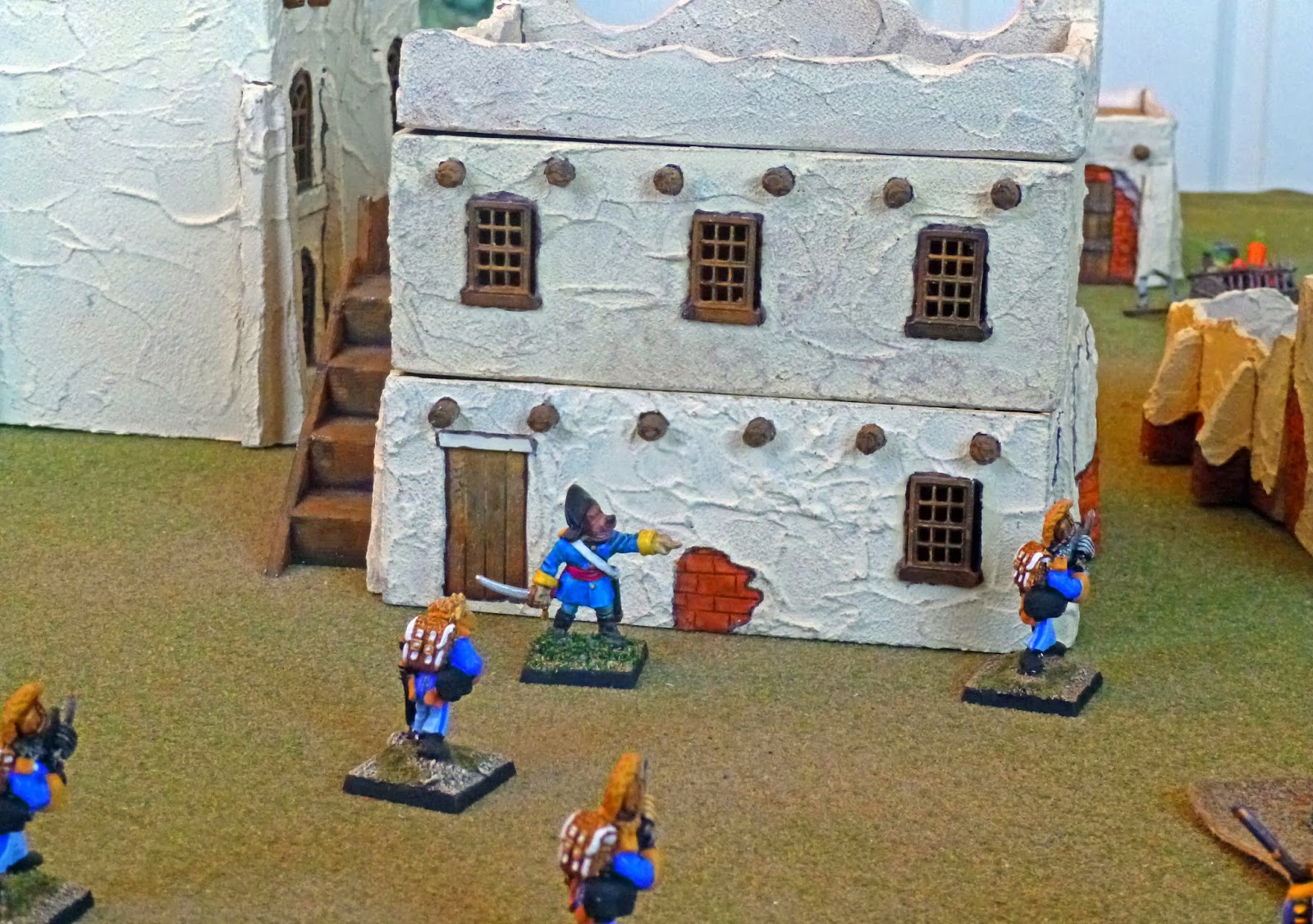 Having successfully torn myself away from the seedy underworld of Hong Kong on the Xbox for the moment its back to game development at last...

Work on the Napoleonic skirmish game has re-commenced.

This play test involved some new mechanics designed to capture the feel of sharp melodramatic action in the Napolonic era. In particular these entail a new simpler To Hit method, eliminating the need to keep track of who has a loaded weapon, and changes to the effects of Reaction Tests.

Although this game used my Flintloque figures, these were the only fantasy element in the game.

The encounter was a fairly straight Rescue encounter as found  in the By Savvy and Steel rules as my intent here was to concentrate on the combat aspect of the game rather than worry too much about porting the game situations to the Napoleonic period.

I was very keen to try out some new concepts in sunny Spain. However as my boy had taken a fancy to the Otterman and Undead... 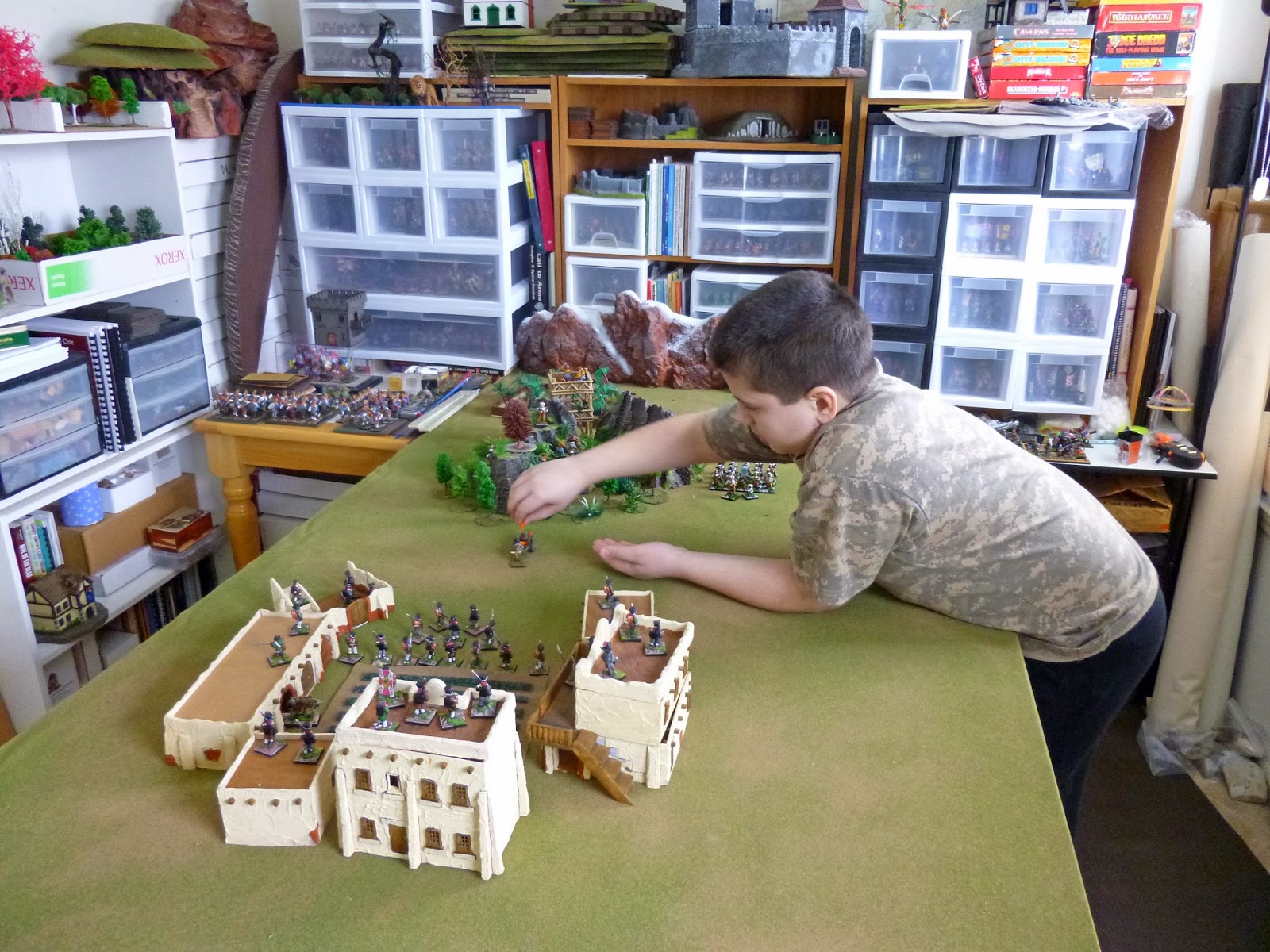 ...and had set up the table accordingly for a short lived game... 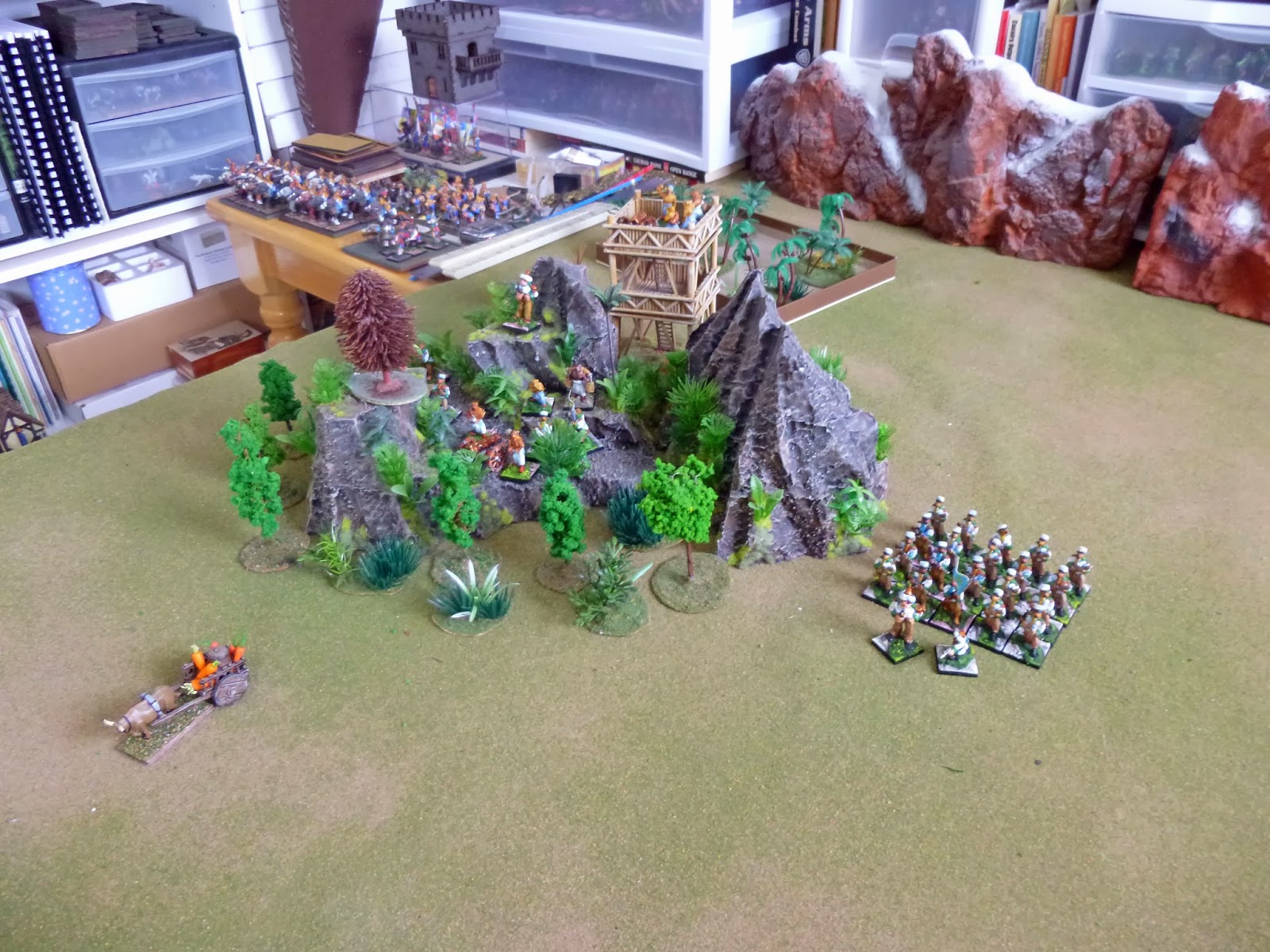 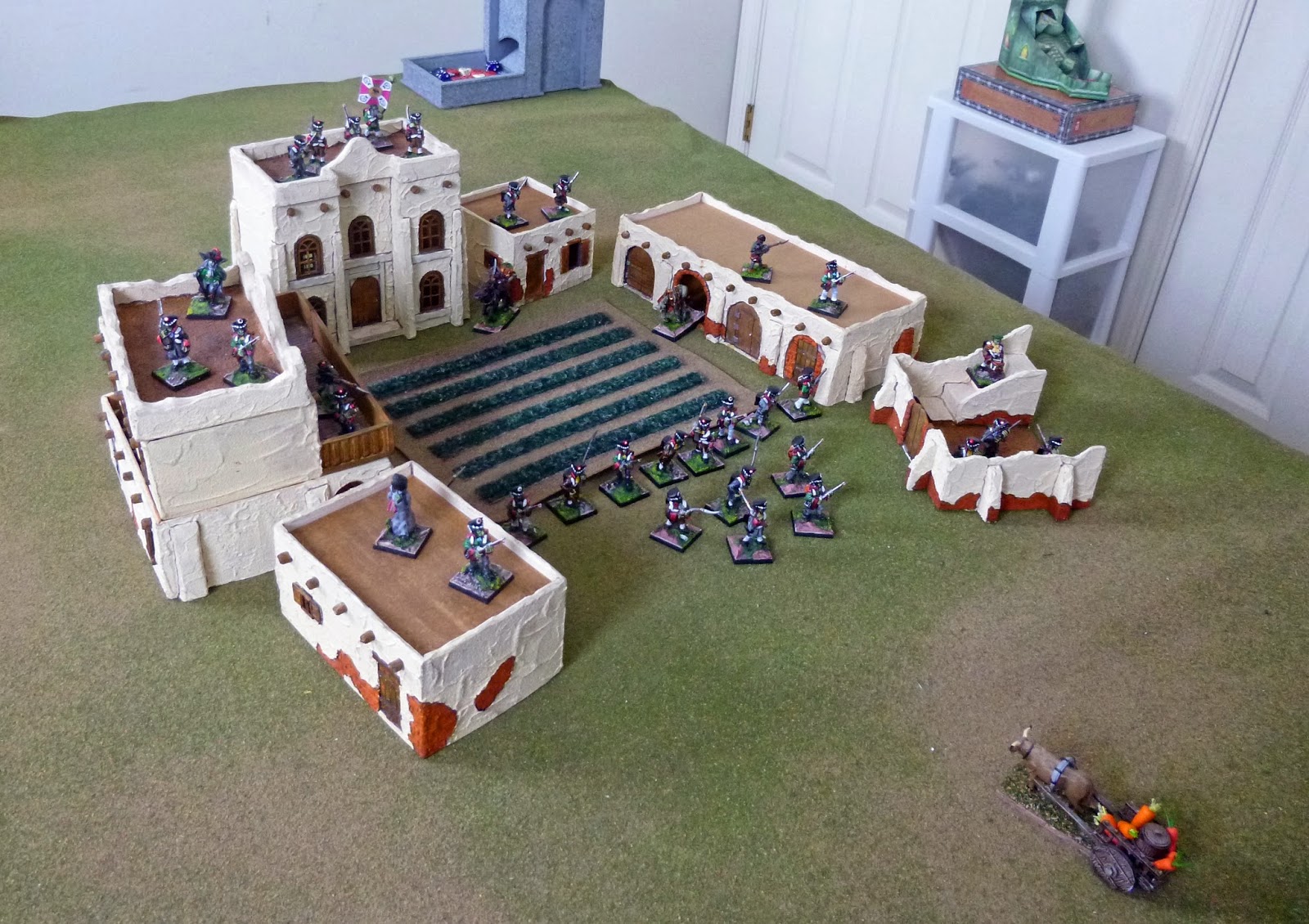 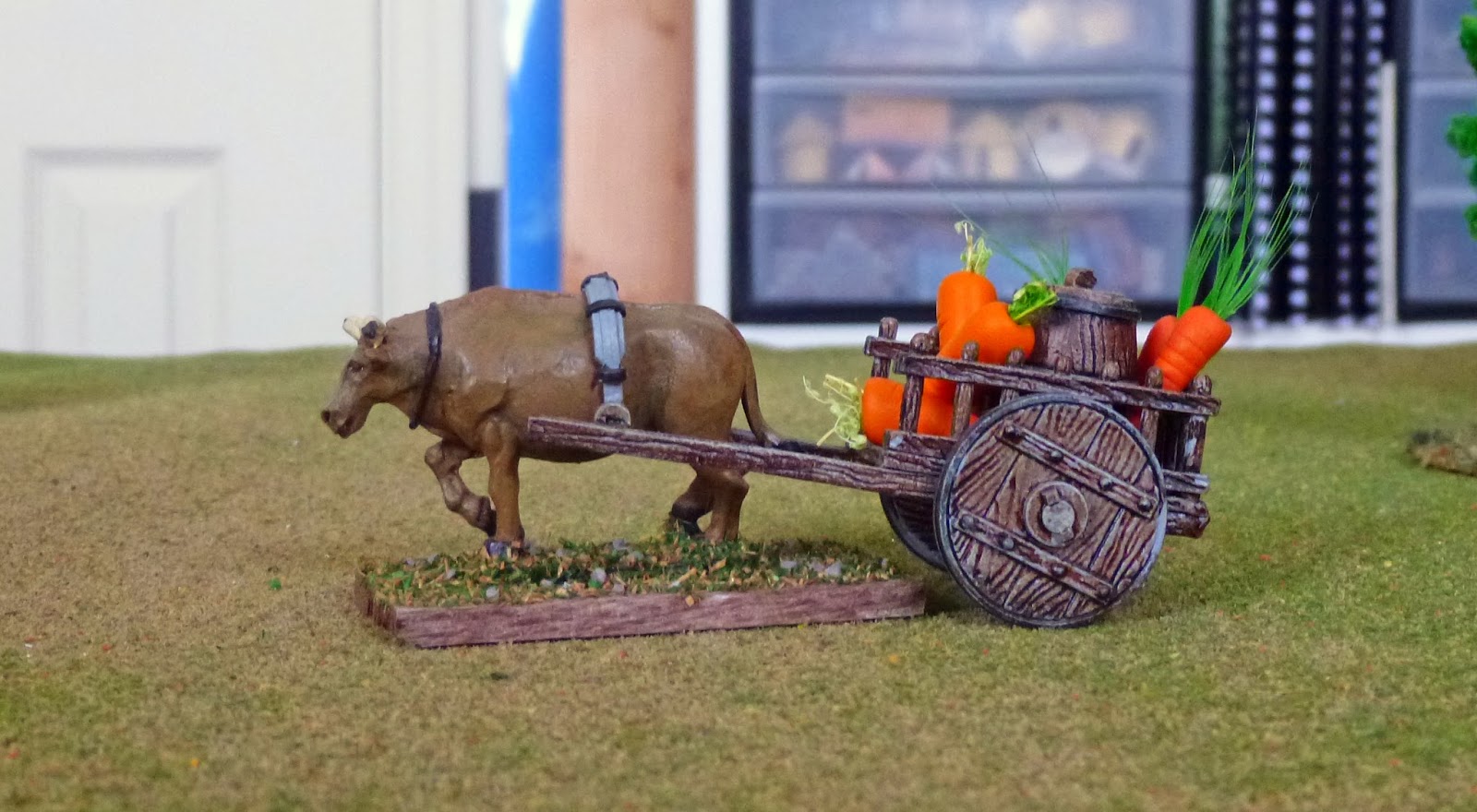 Captain Buster of the Ostarian Horse Marines has been sent on a mission to rescue a VIDI (Very Important Doggy Indeed). 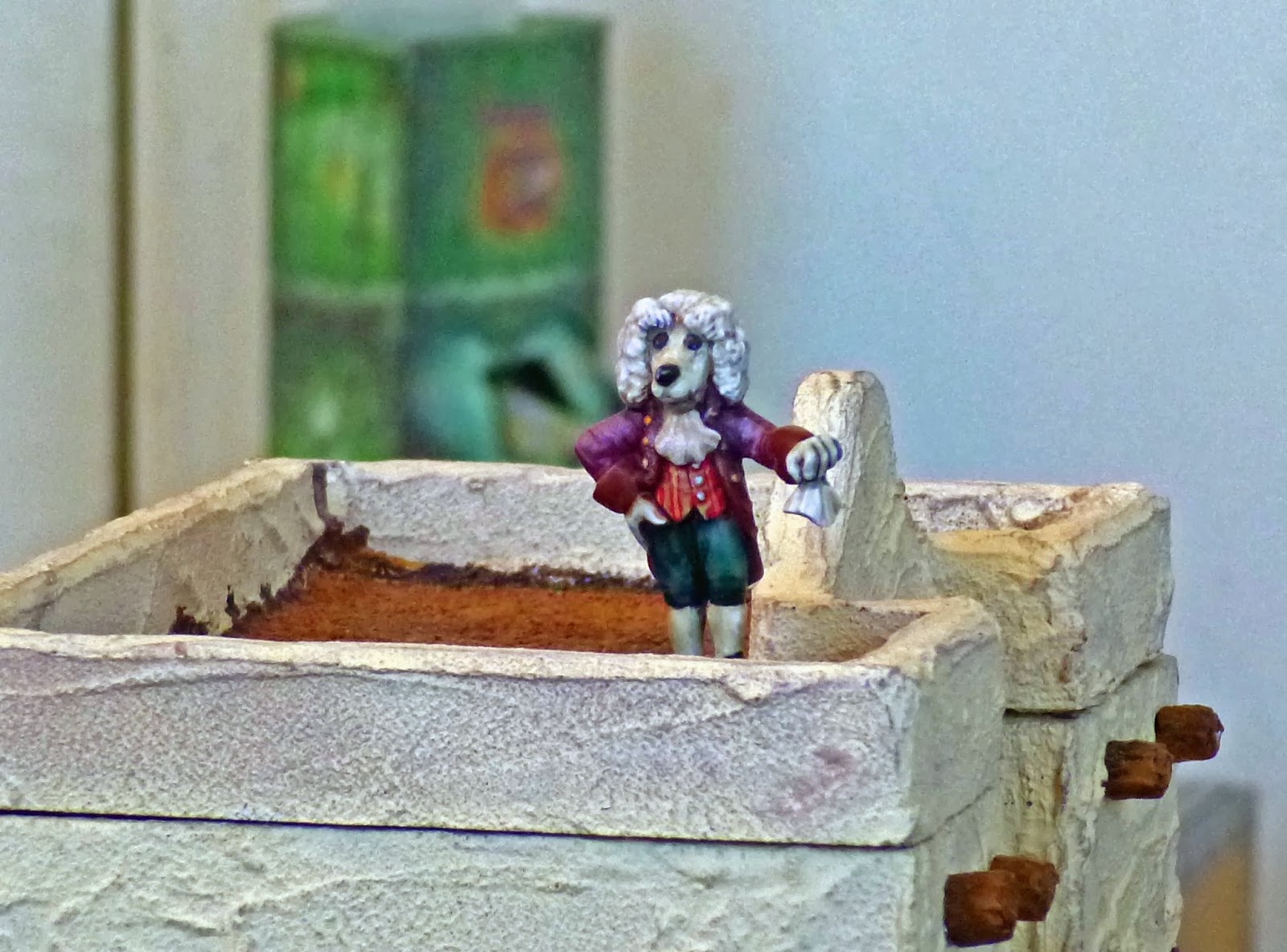 Baron Yippstadt had recently been abducted by Othari bandits and was being held in a village just beyond the Otterman frontier. 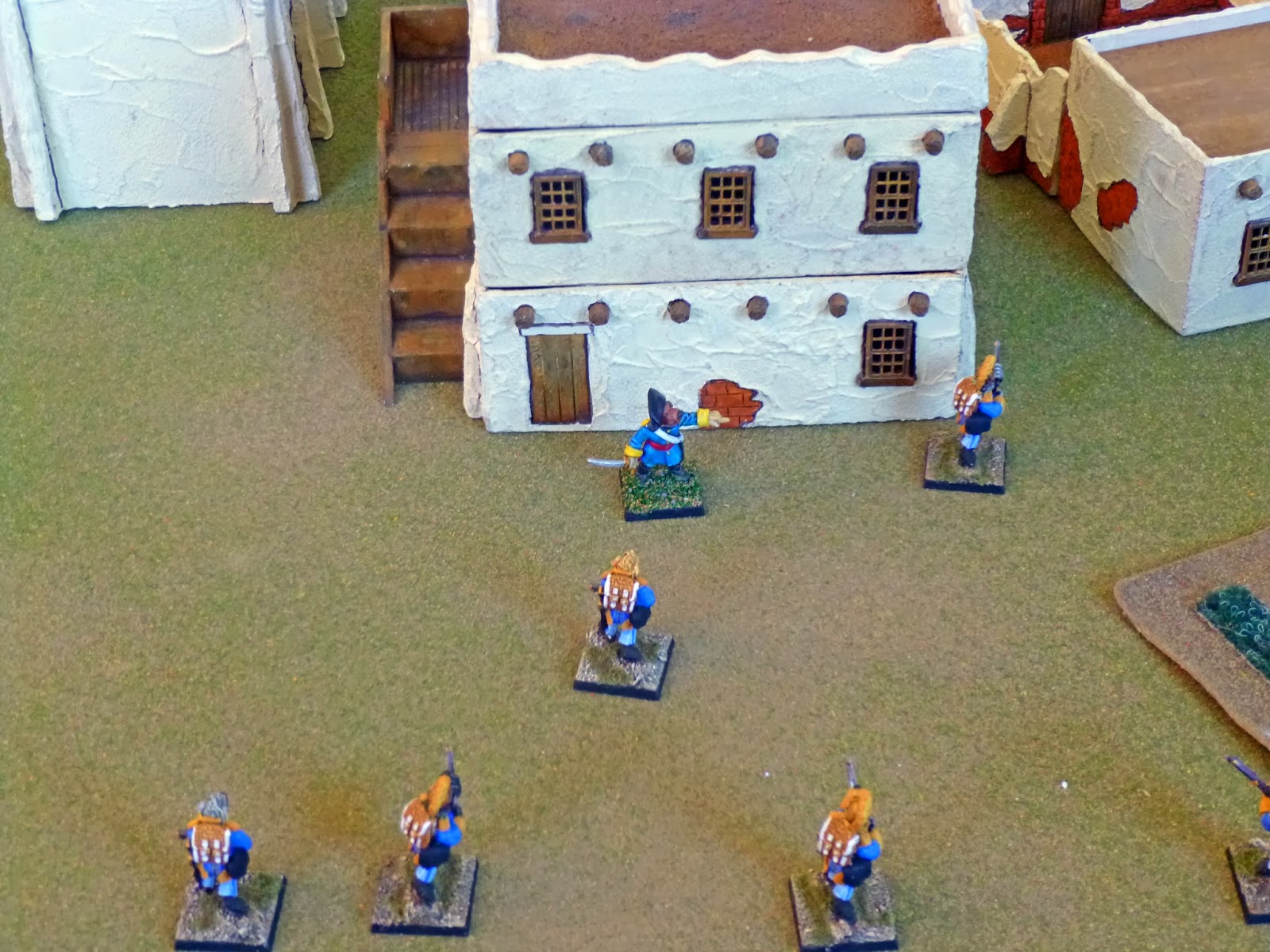 Buster took his command to within striking distance of his target and then proceeded on foot with six of his Chosen Hounds to effect the rescue. 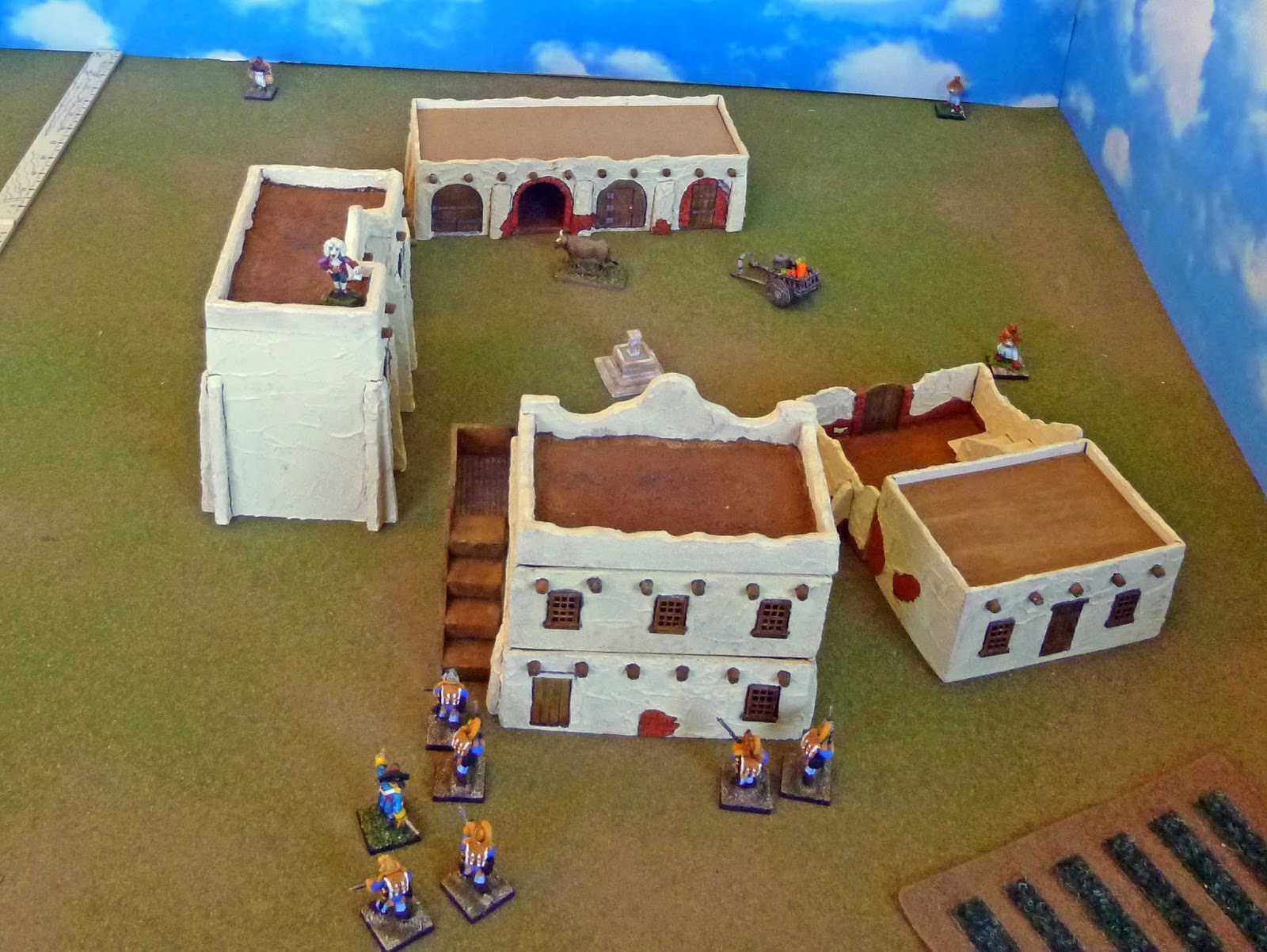 Yippstadt was reportedly being held in the upper story of an inn that faced on the town square. There were, as usual, three Possible Enemy Forces (PEF's) deployed which could turn out to be anything from heavily armed troops to nothing but a case of nerves. 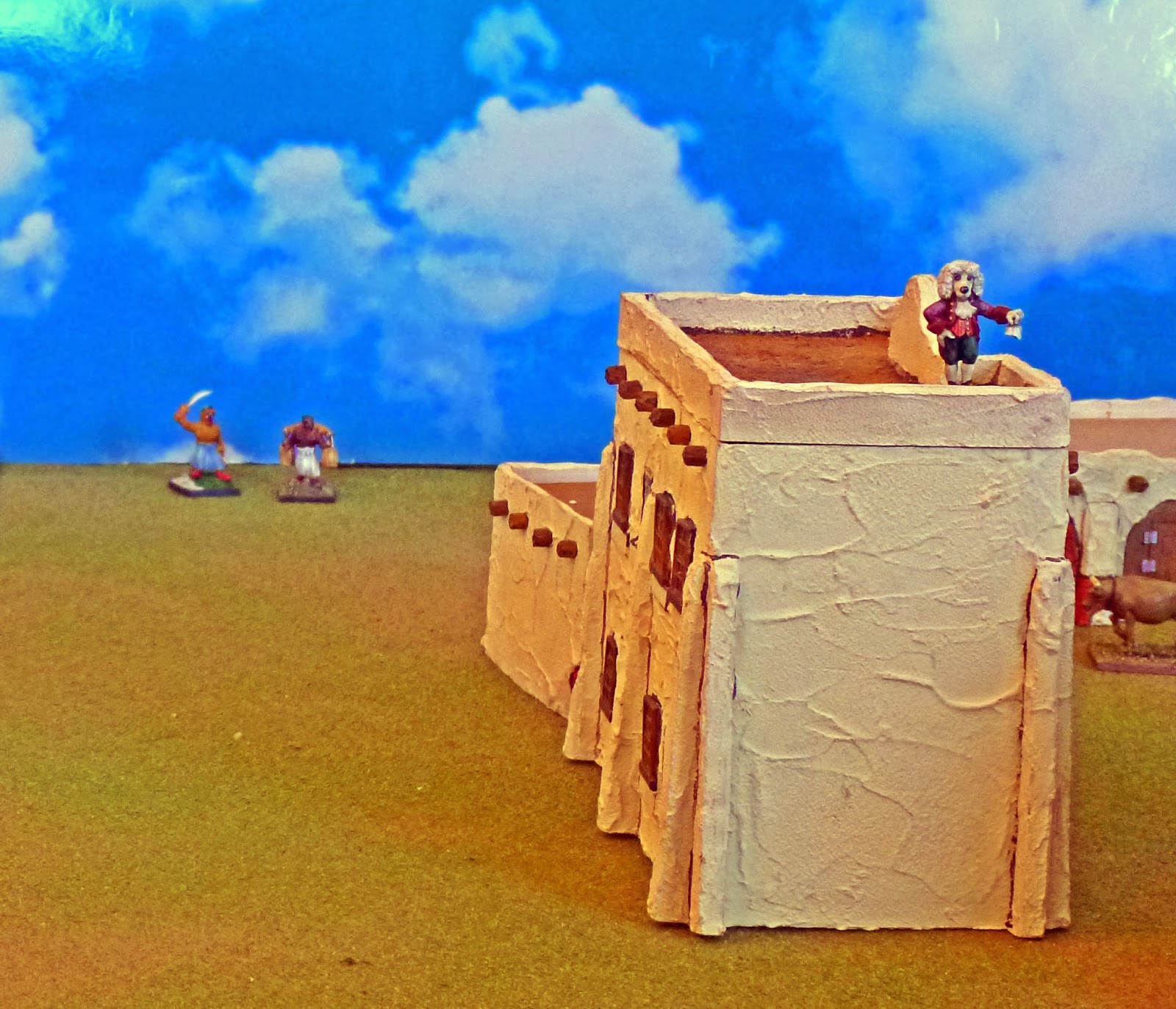 Buster made good progress at first, against a seemingly inactive, and hopefully inattentive, enemy.

However the number of PEF's had increased to five before a single enemy had been spotted. 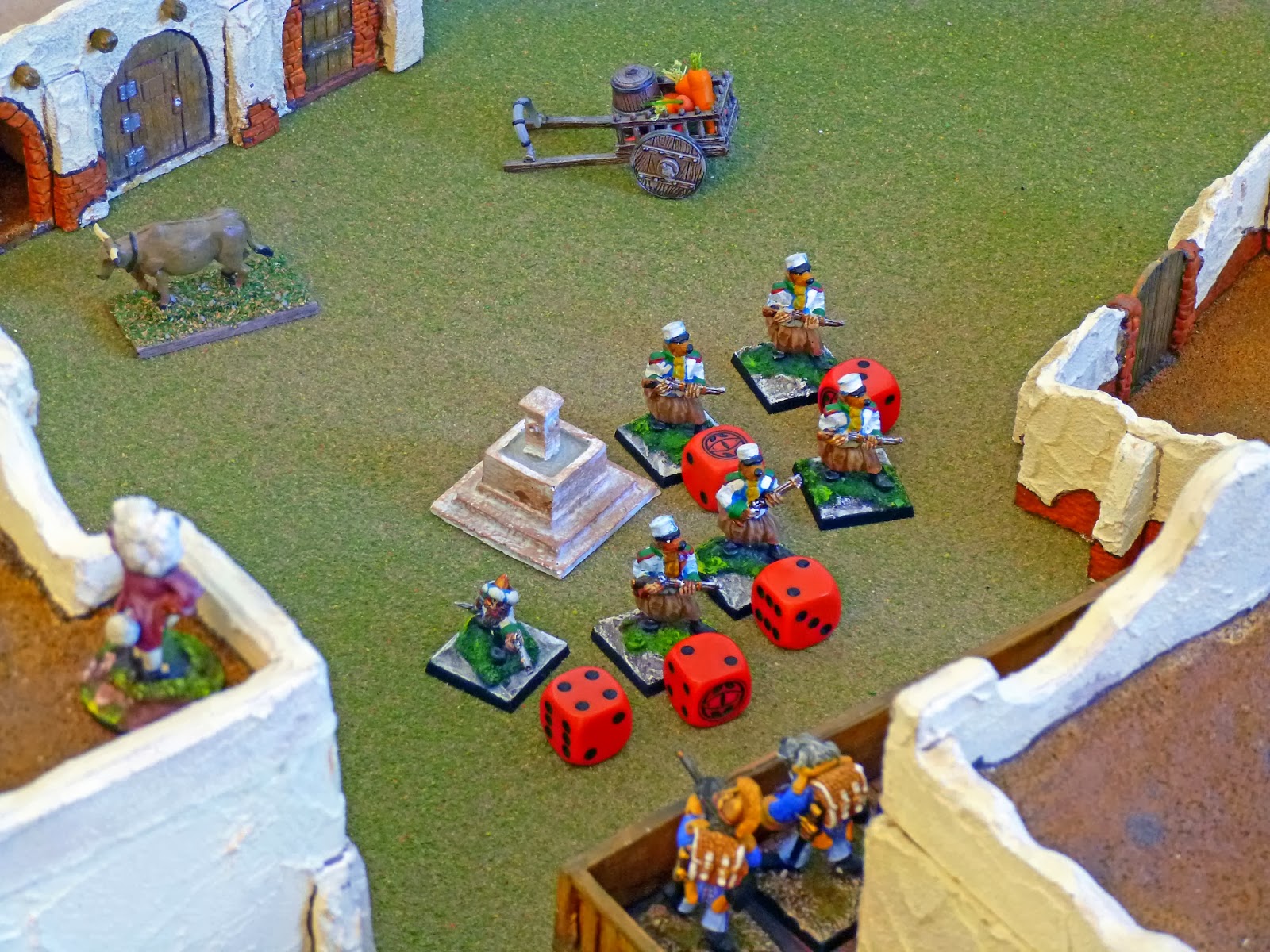 In due course, Buster sent two of his hounds onto the balcony of the nearest building to suss out any enemy in the square...which were revealed to be five otters led by a dwarven serjeant. 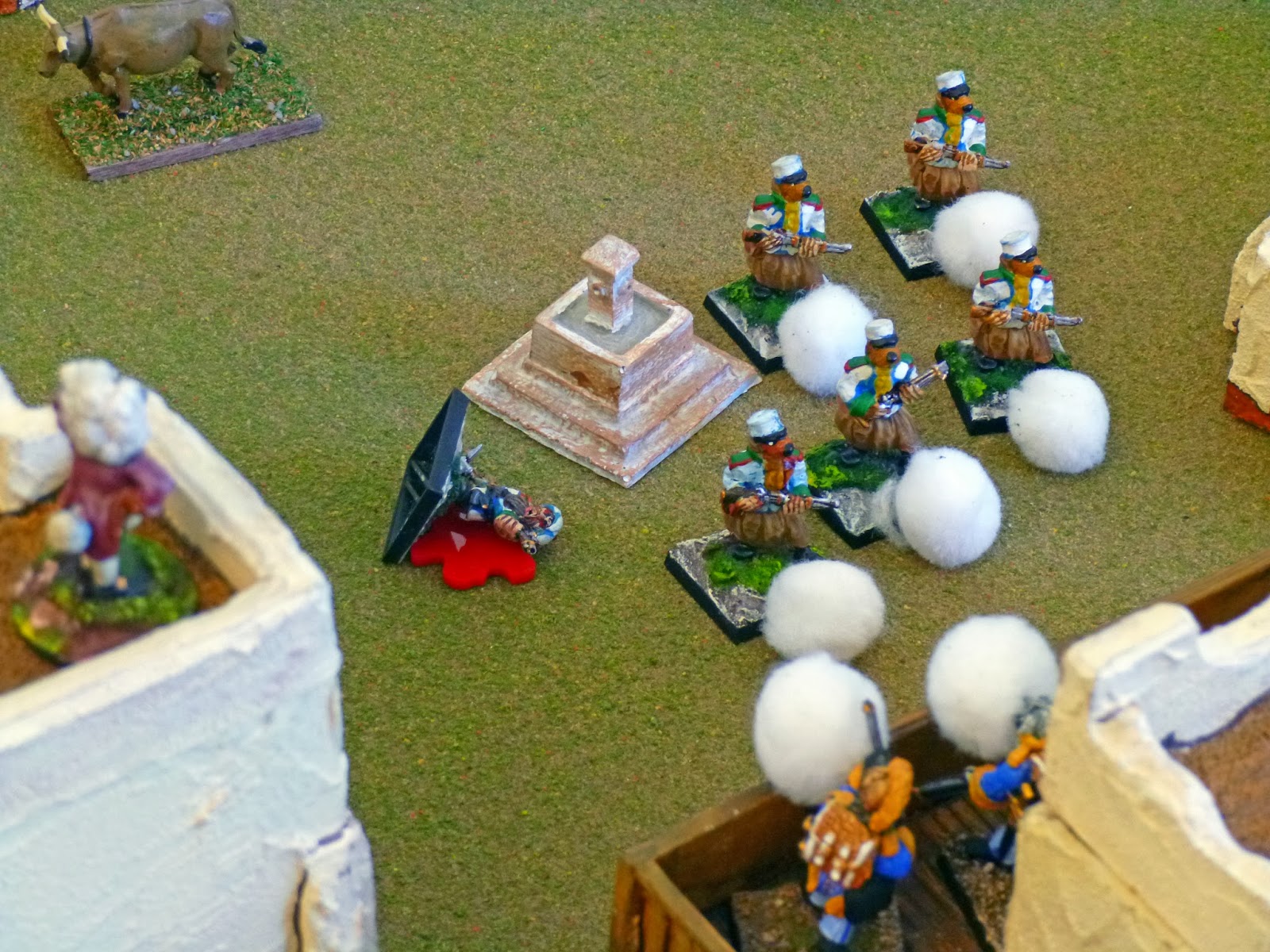 In the opening exchange of fire the serjeant was shot down much to the dismay of his otters. 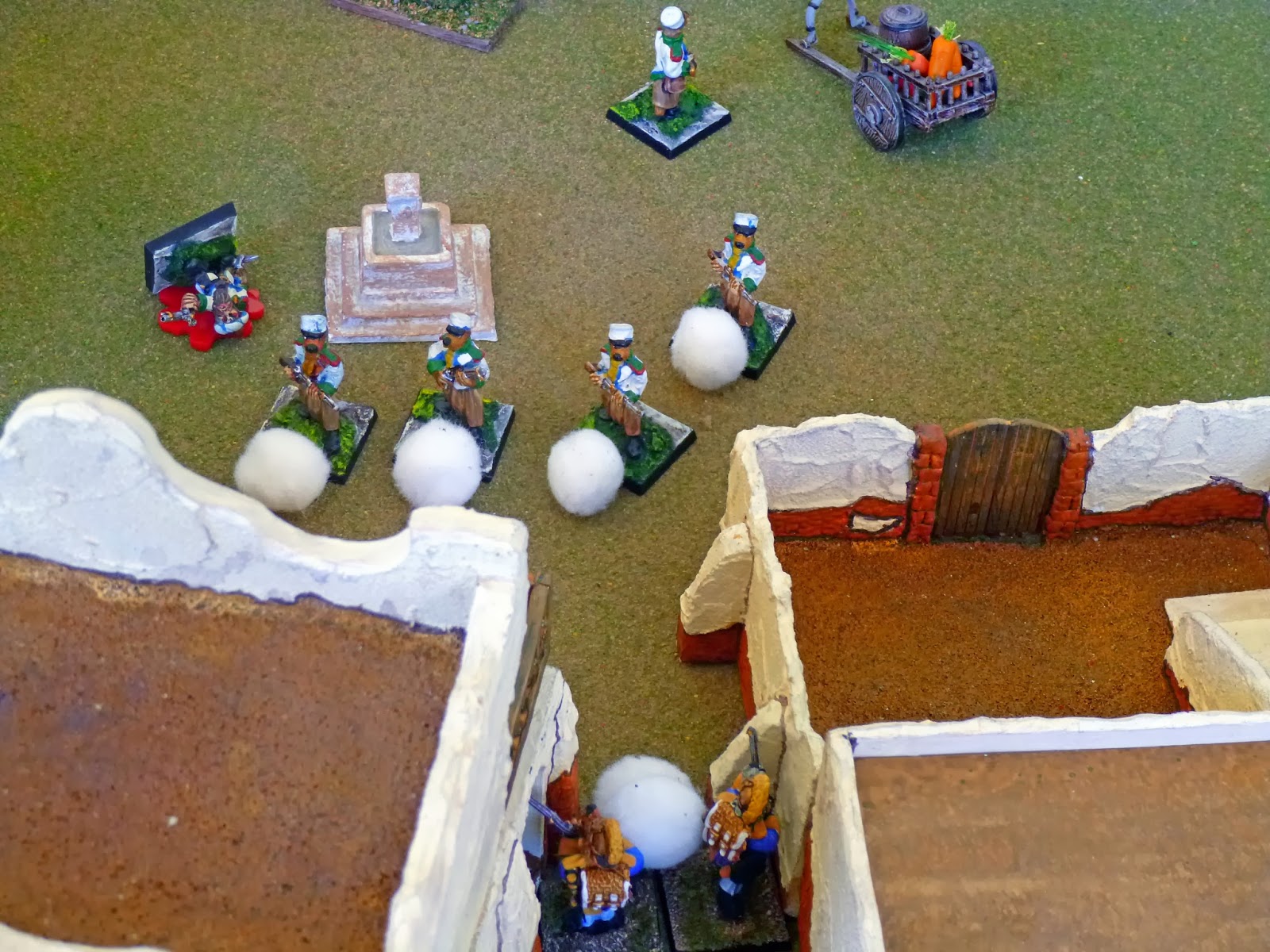 Soon the otters were taking fire from their left as well as their center. 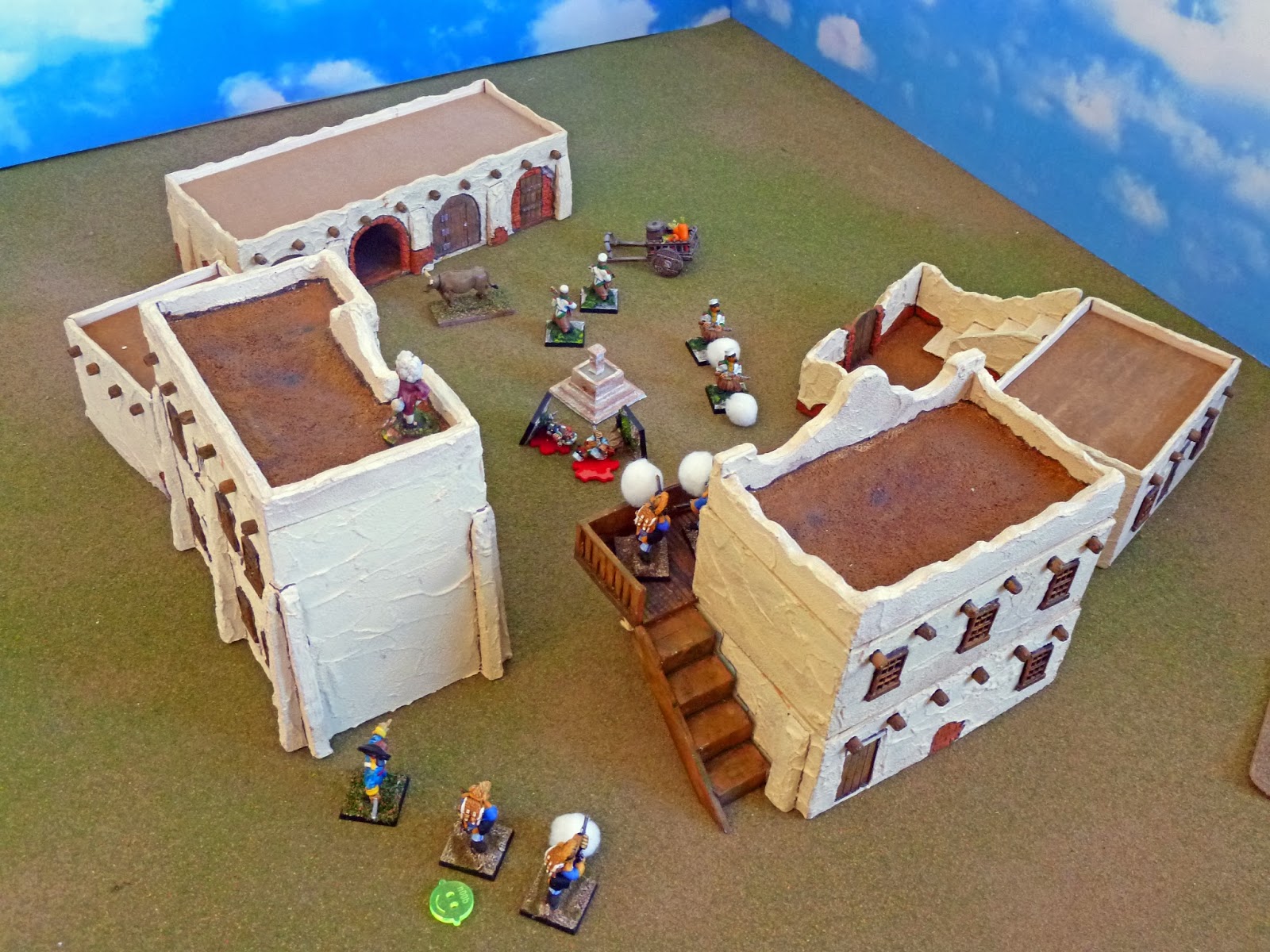 The advent of fire from their left as well proved too much to bear. 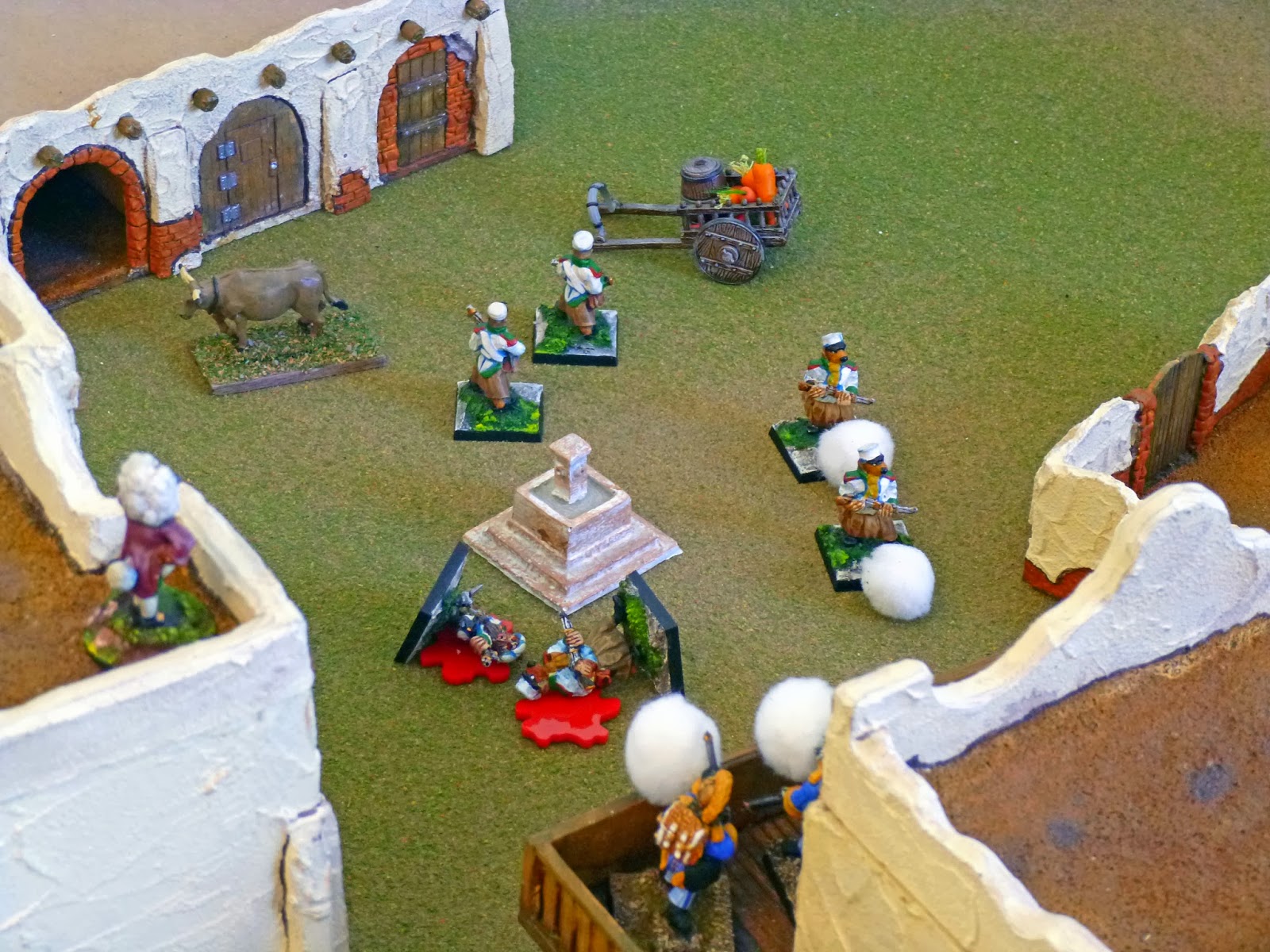 The first group of otters was soon set to flight. 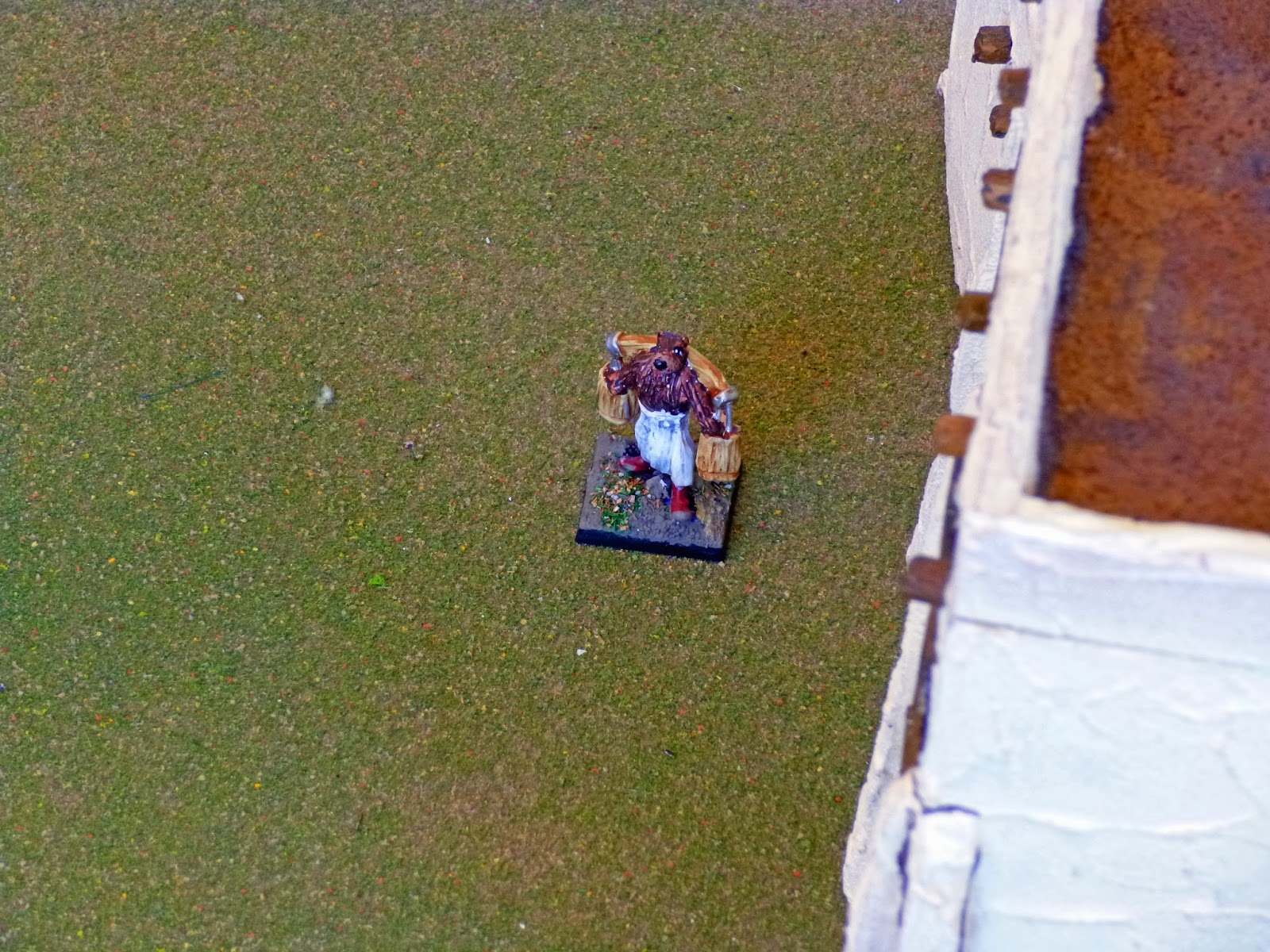 Meanwhile one PEF advanced towards the dogs on the outskirts of the village. 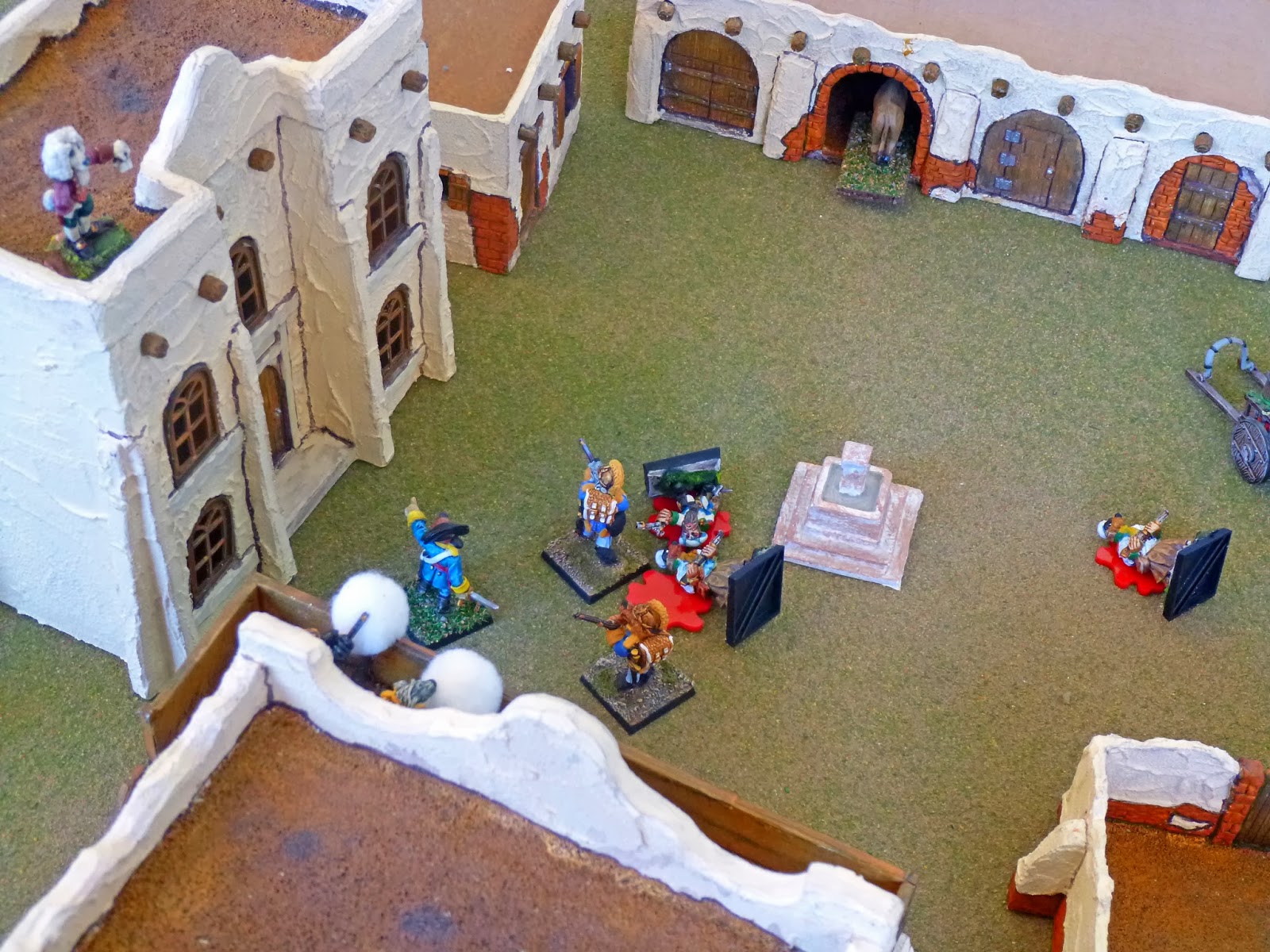 Having cleared the square, Buster took a pair of his dogs and readied to assault the inn. 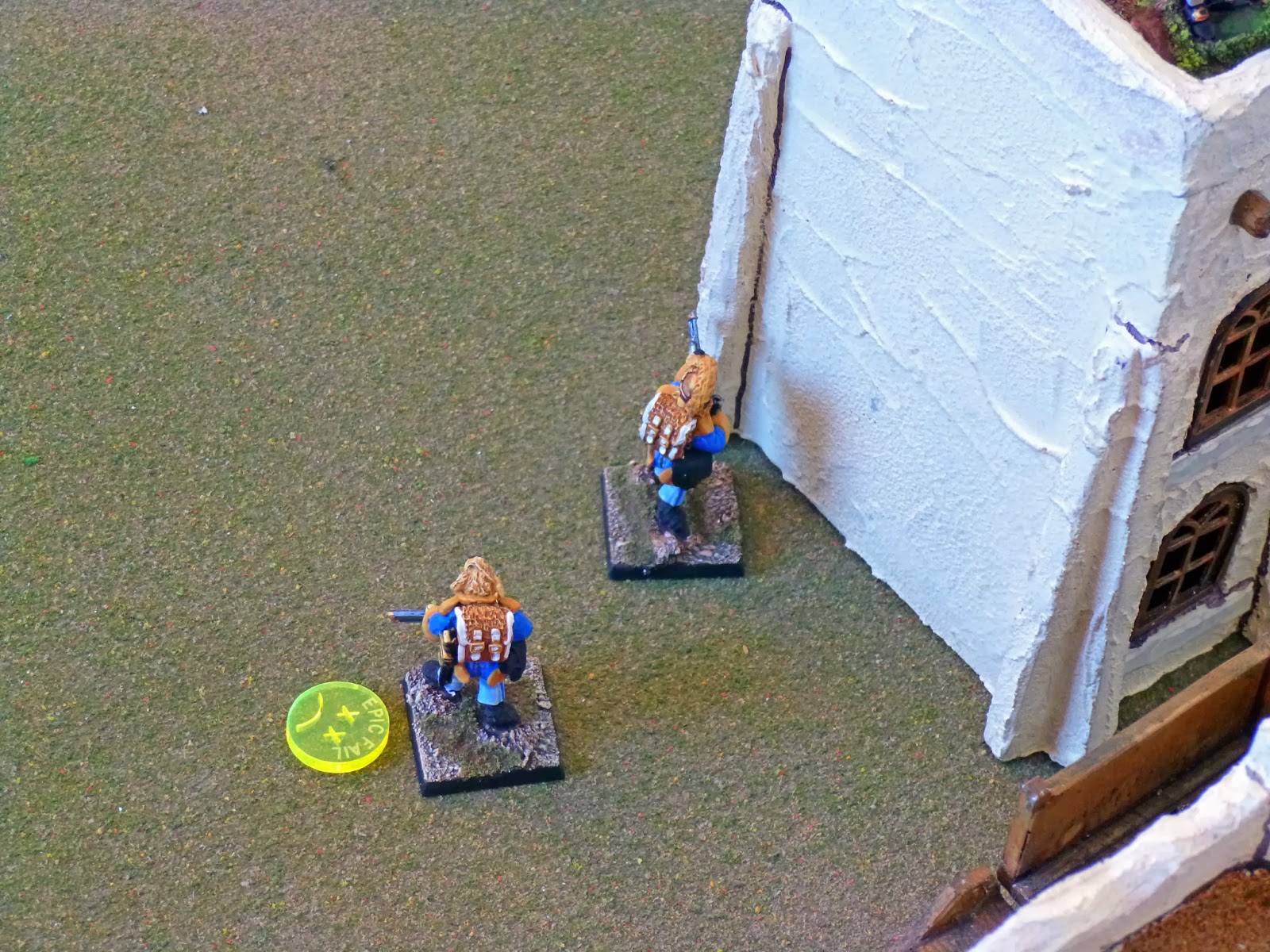 The leftmost pair took up position ready to confront the approaching PEF. Unfortunately the pair had only one working musket between them. 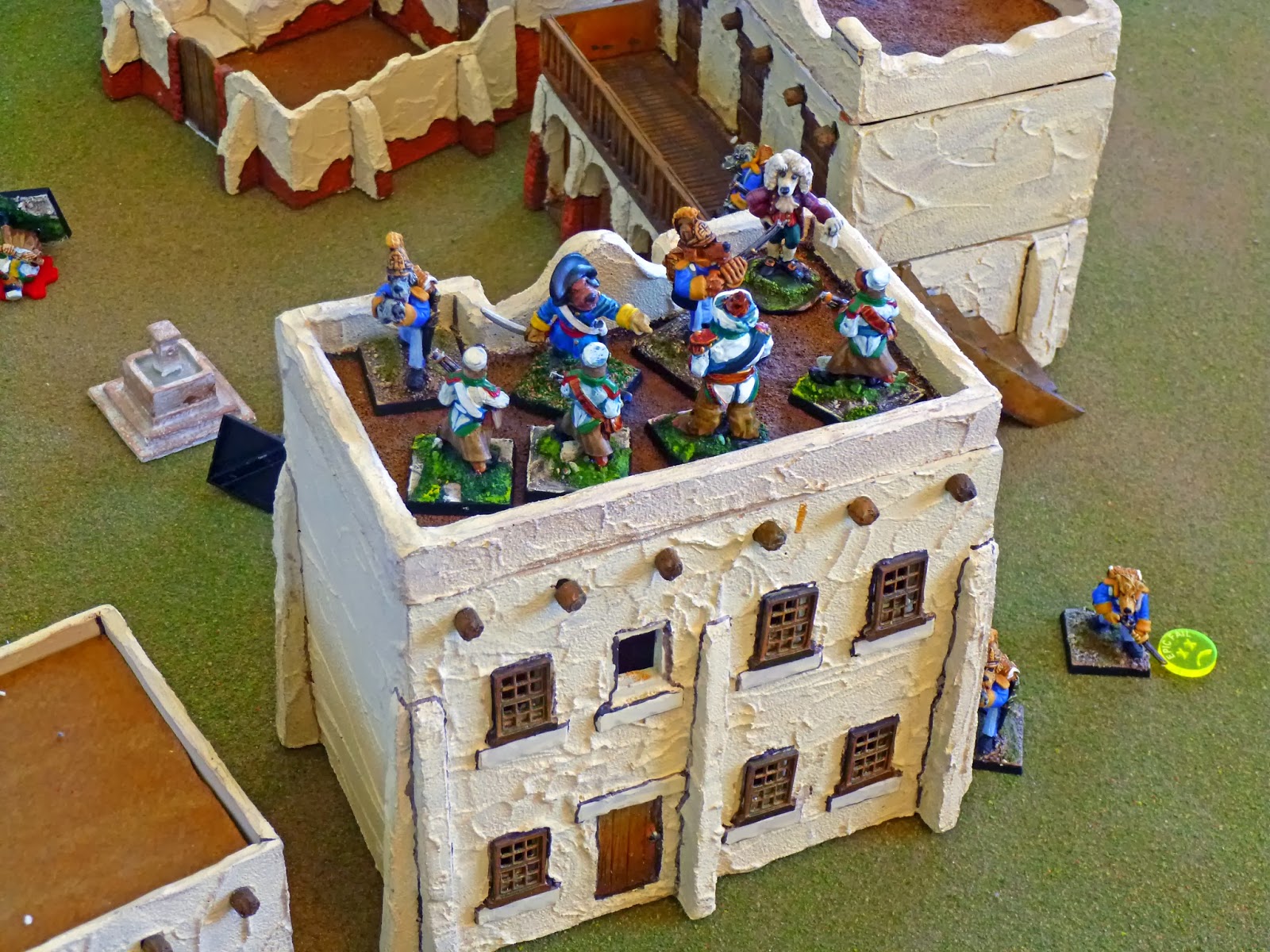 Bursting into the inn, Buster was confronted by an ogre officer backed by three otters. 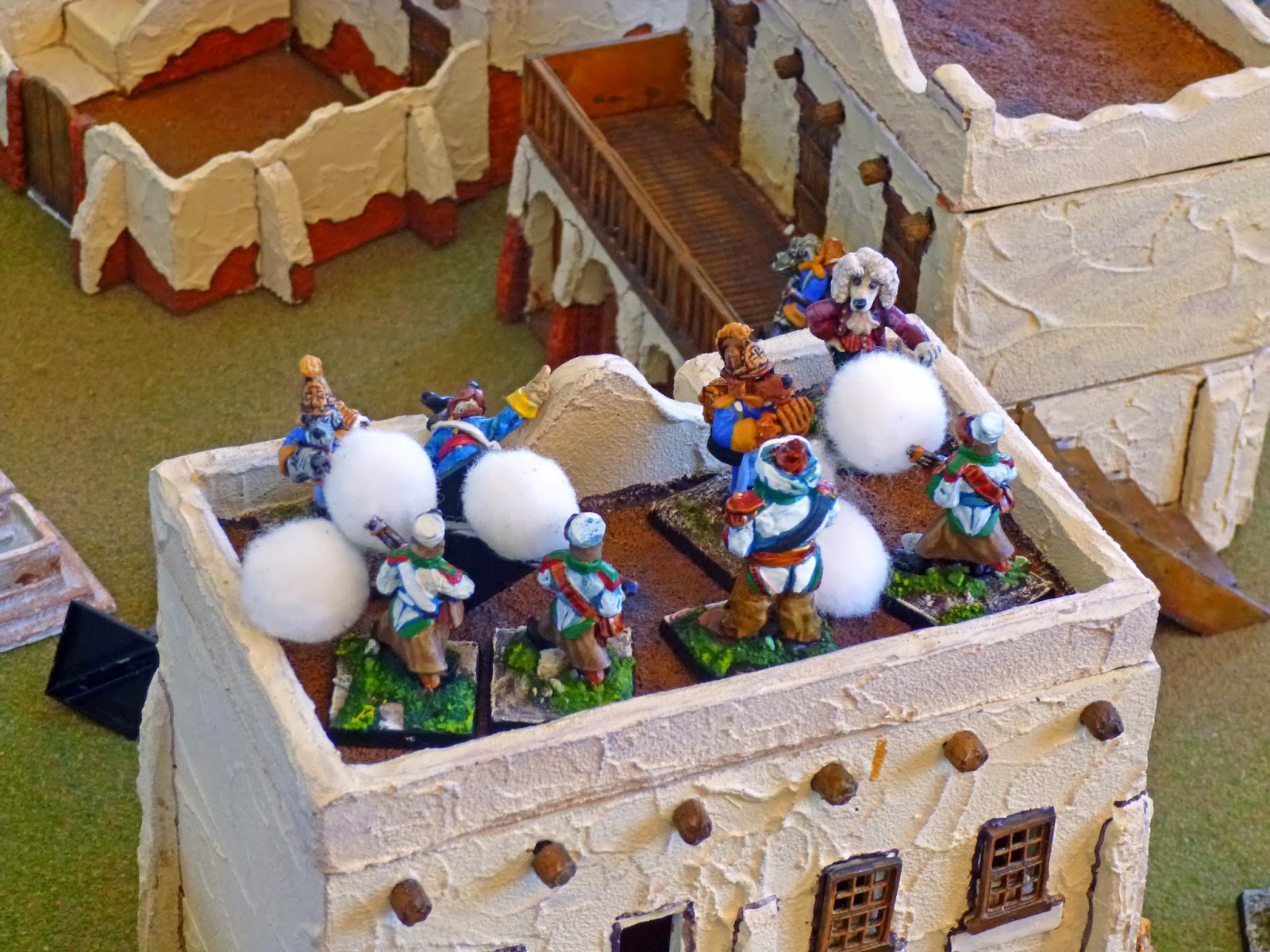 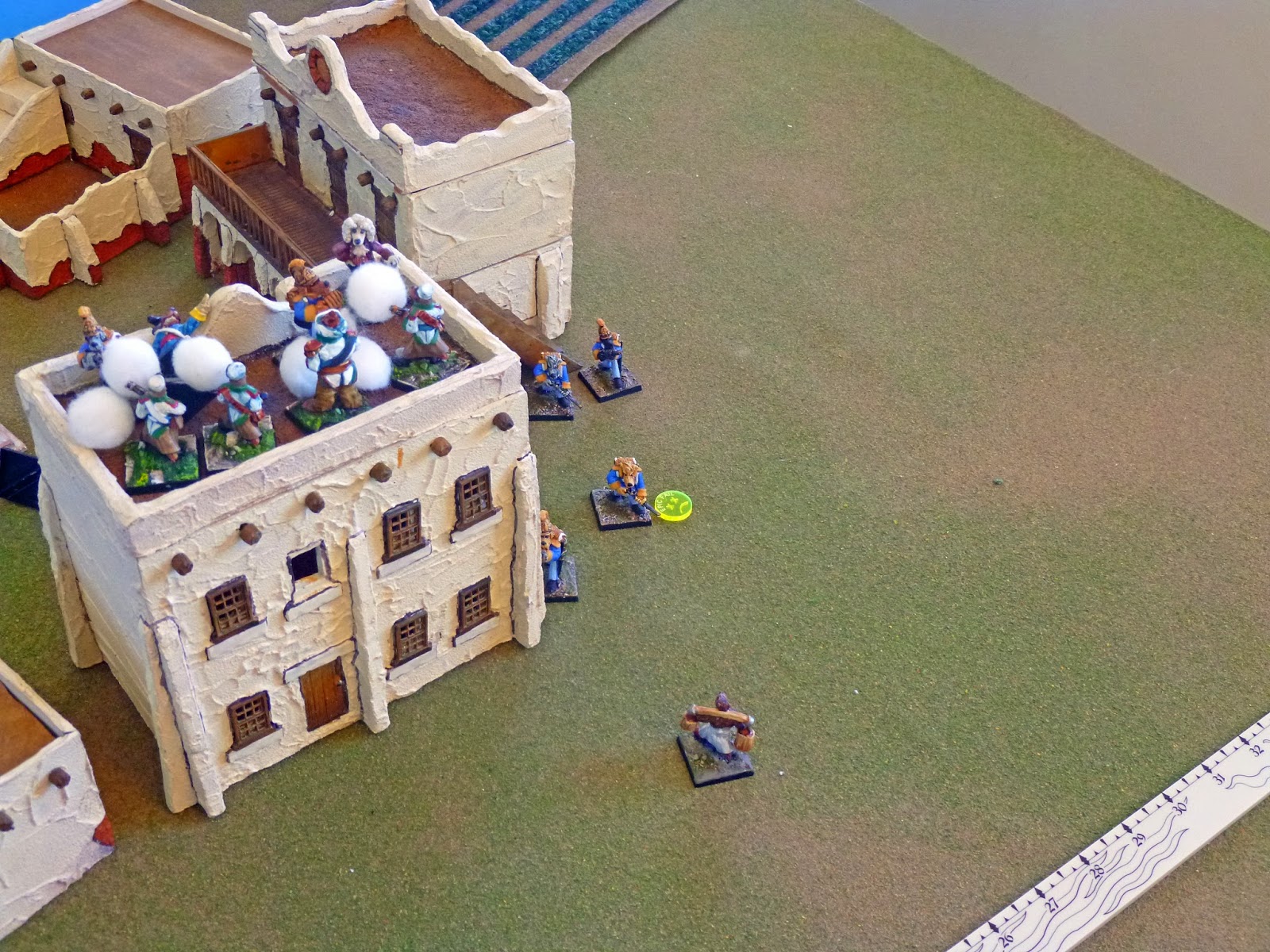 As the wild melee broke out in the inn, the approaching PEF hove into view of the flankers. 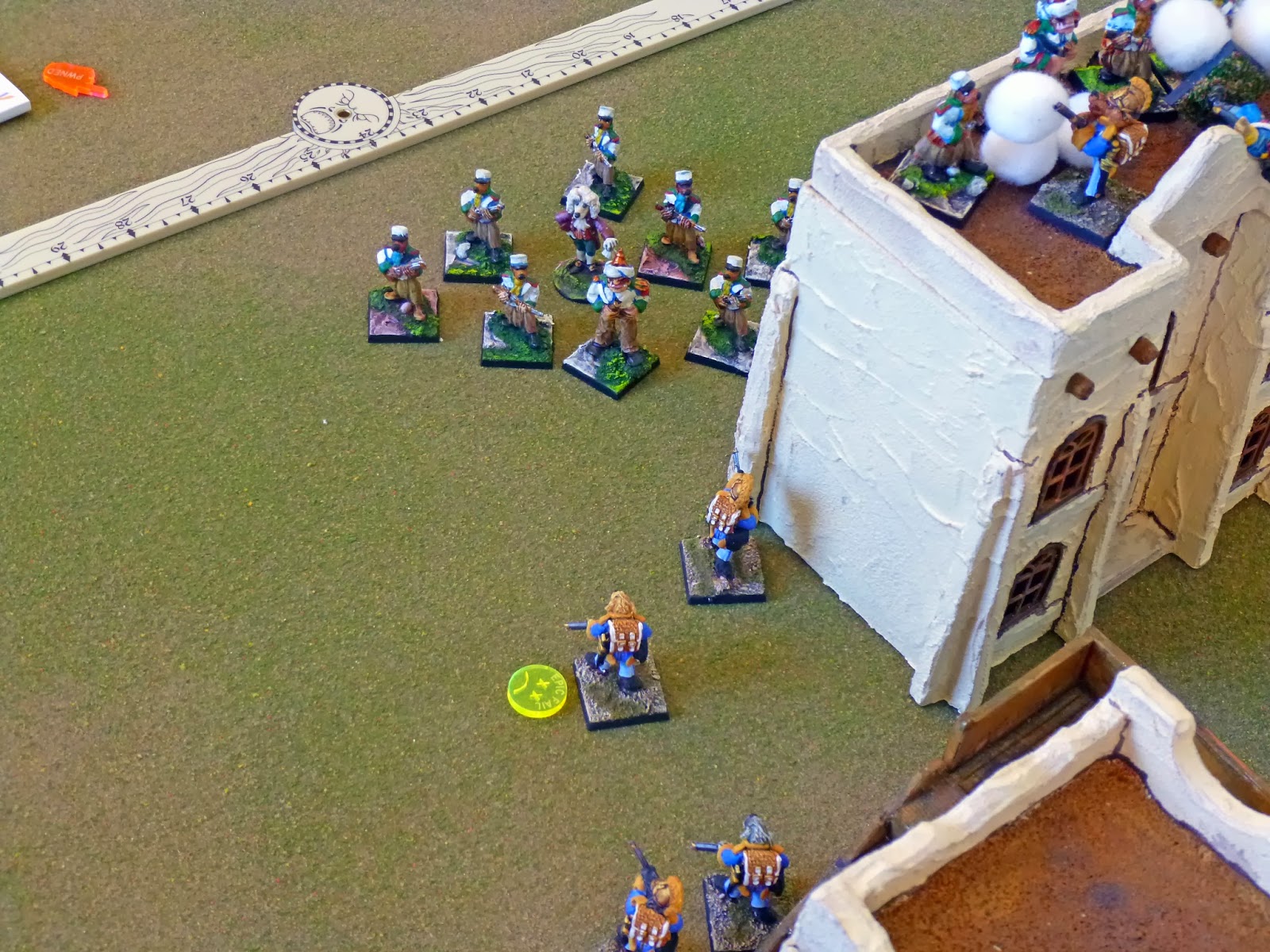 Deceived! The dastardly otters had moved the Baron and were in the process of spiriting him out of town. 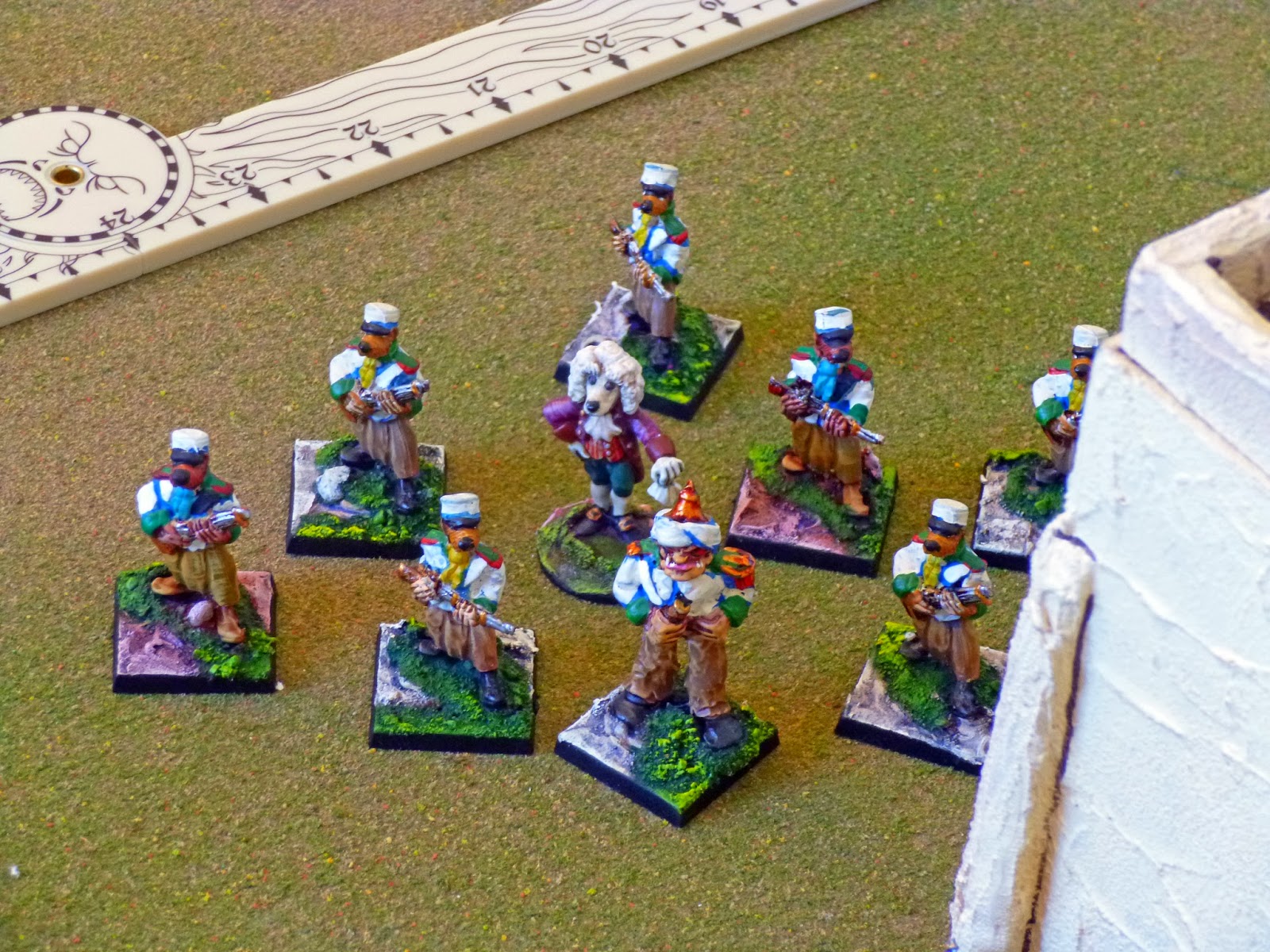 Yippstadt was being escorted by seven otters with an ogre officer! 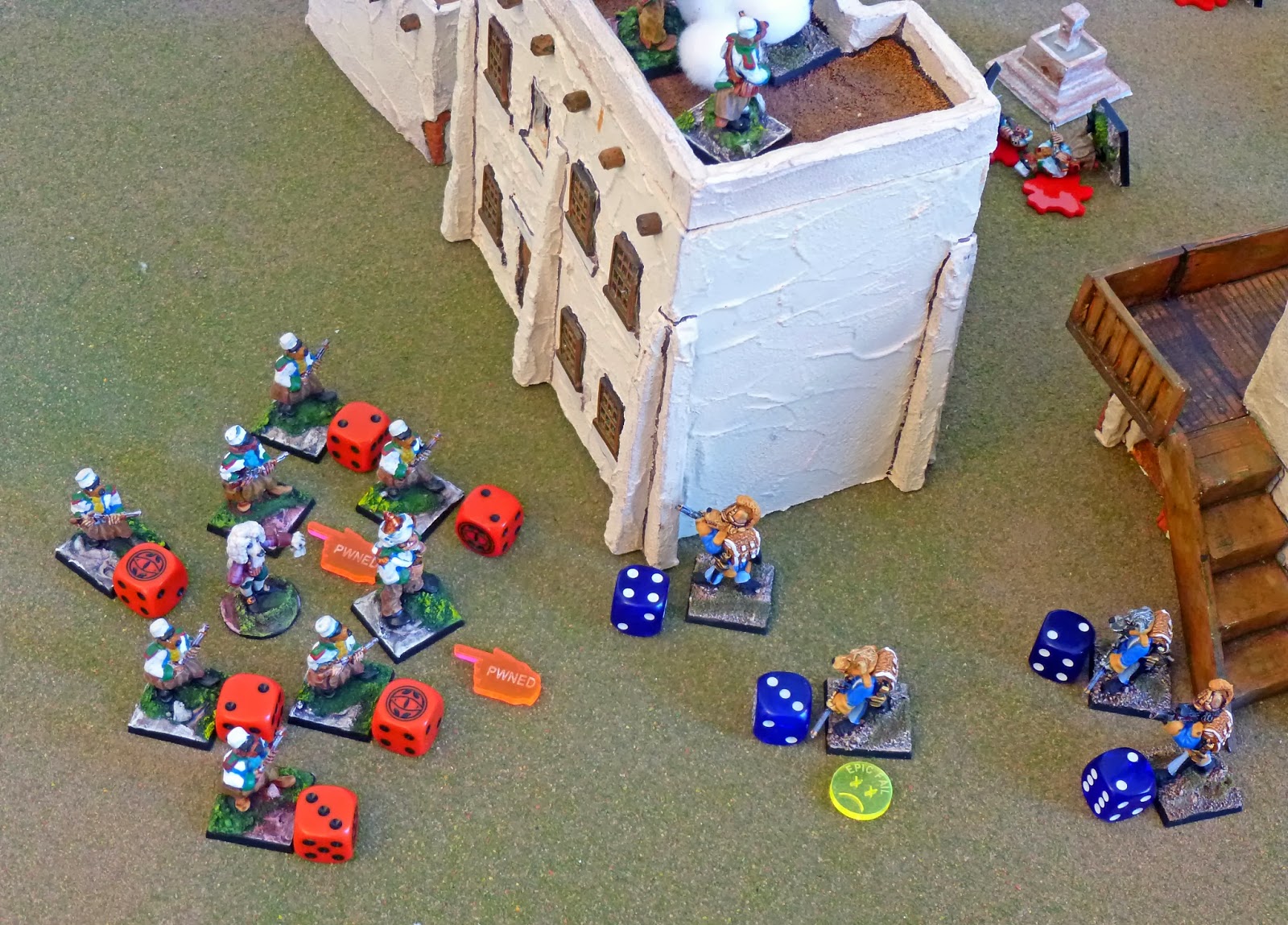 The In sight dice were rolled, and the flankers backed by the reserve pair of hounds confronted the otter laskar. 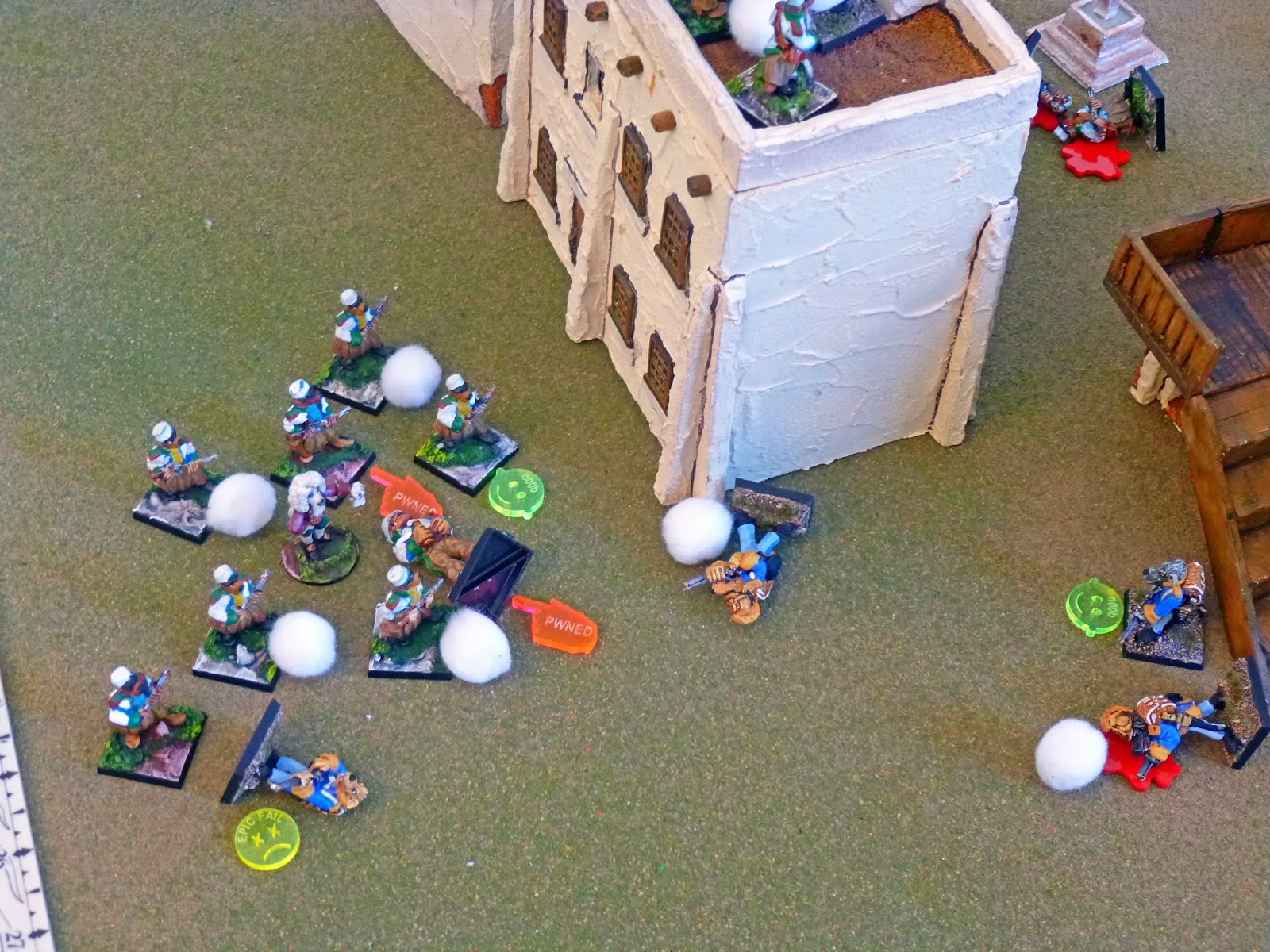 Losses were suffered on both sides. 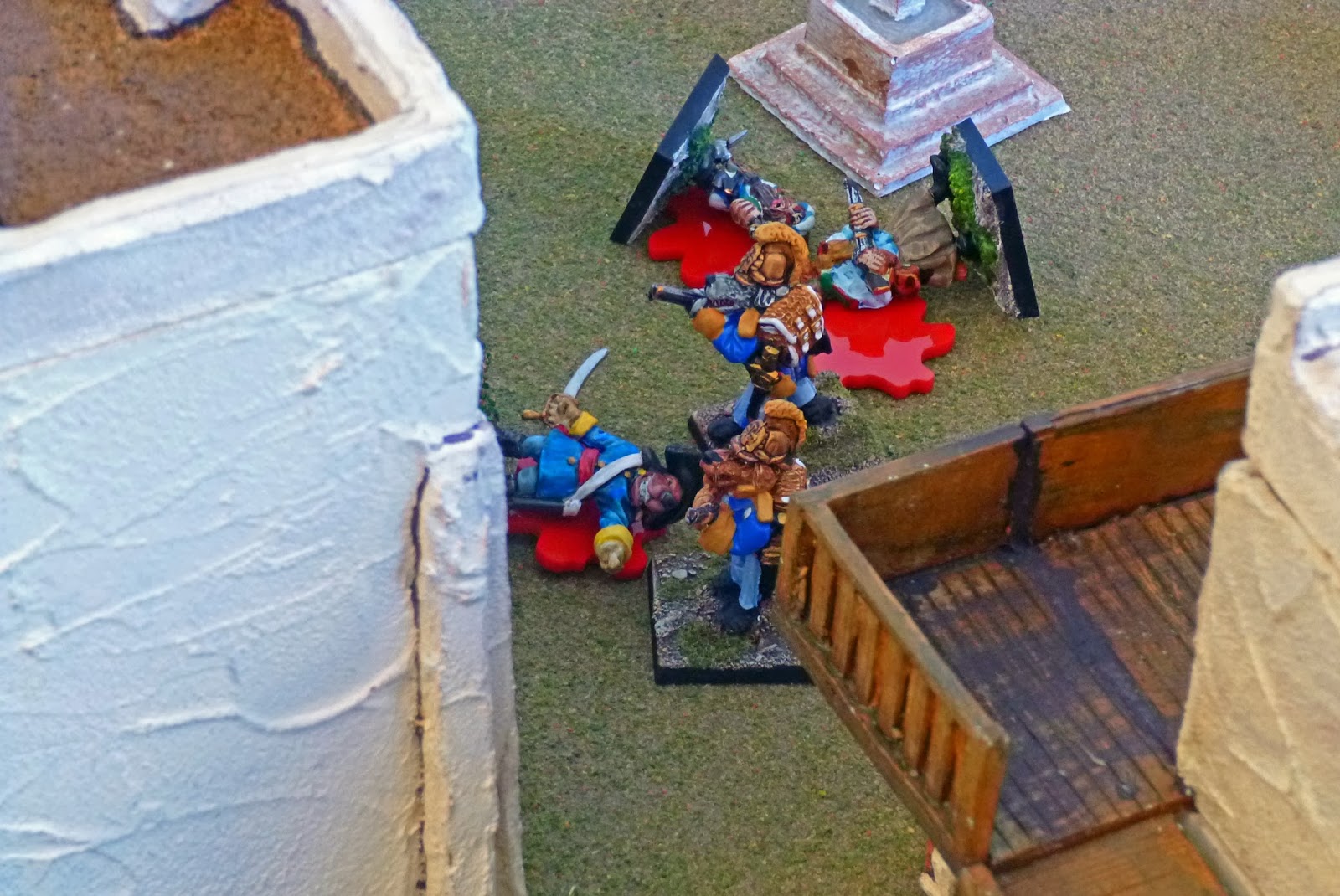 With no sign of Yippstadt at the inn, and with their beloved leader down, the center pair of hounds dragged Buster to safety. 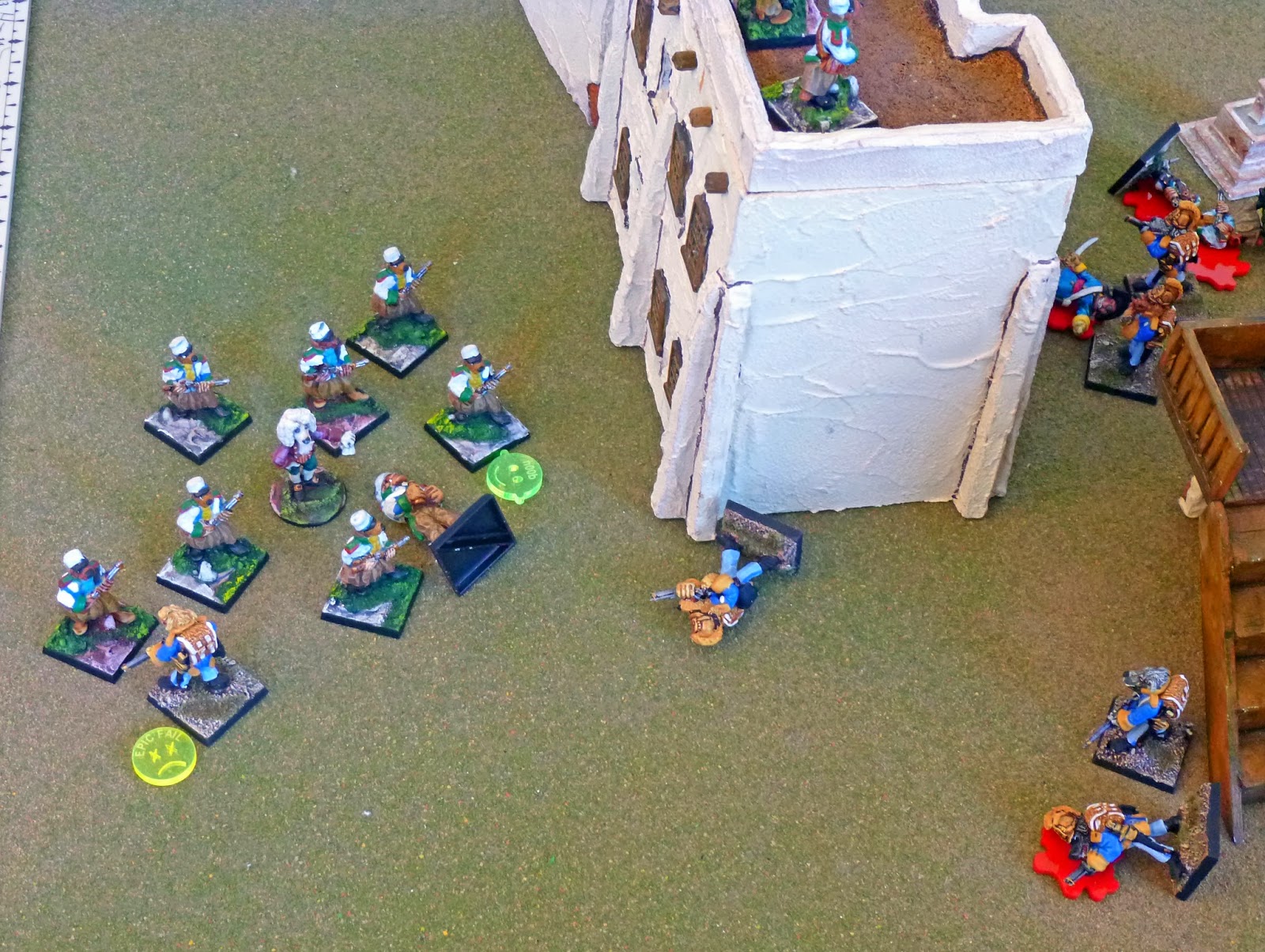 The flankers and reserve were reduced to two hounds standing but the action took its toll on otter morale. 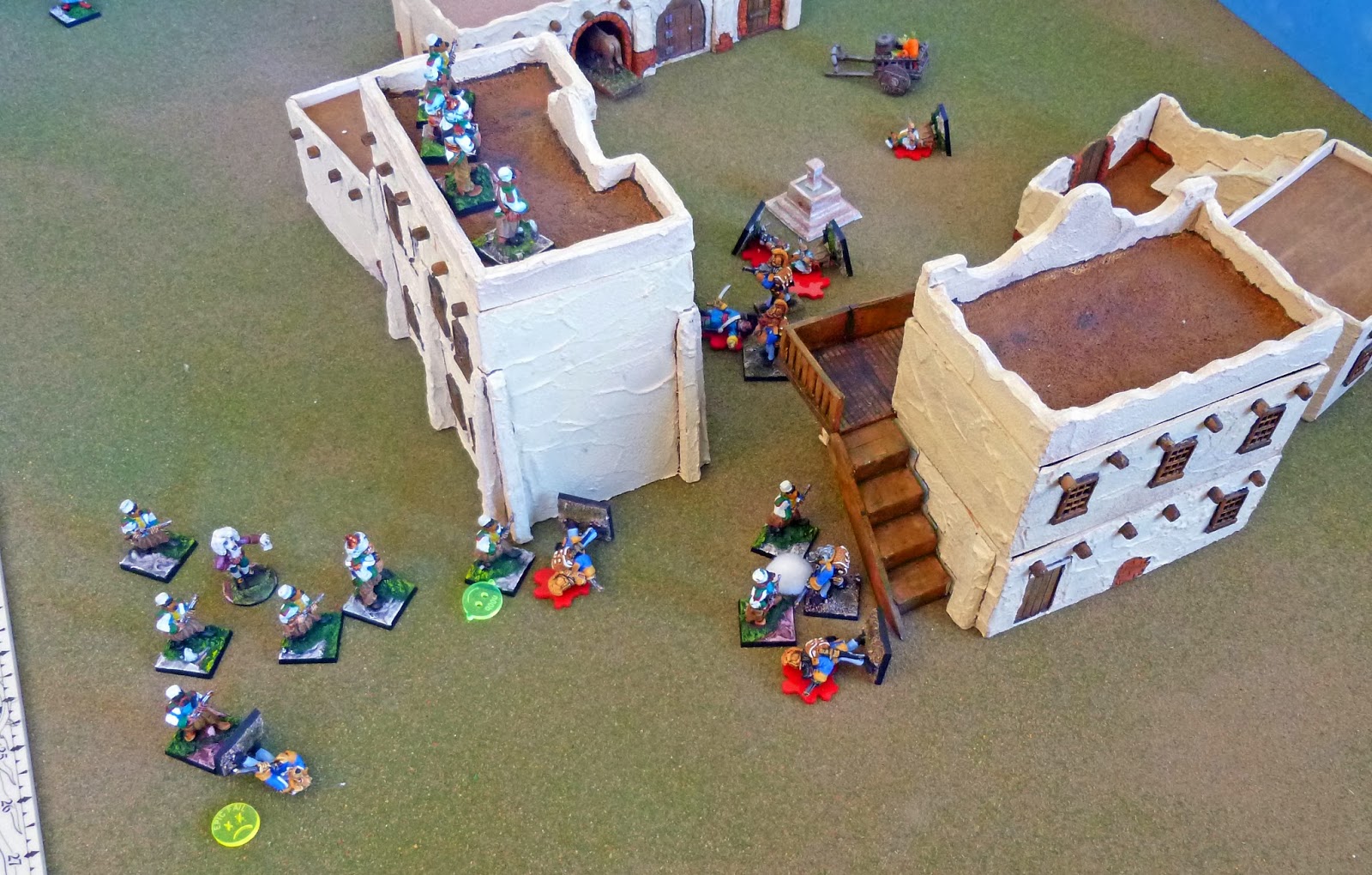 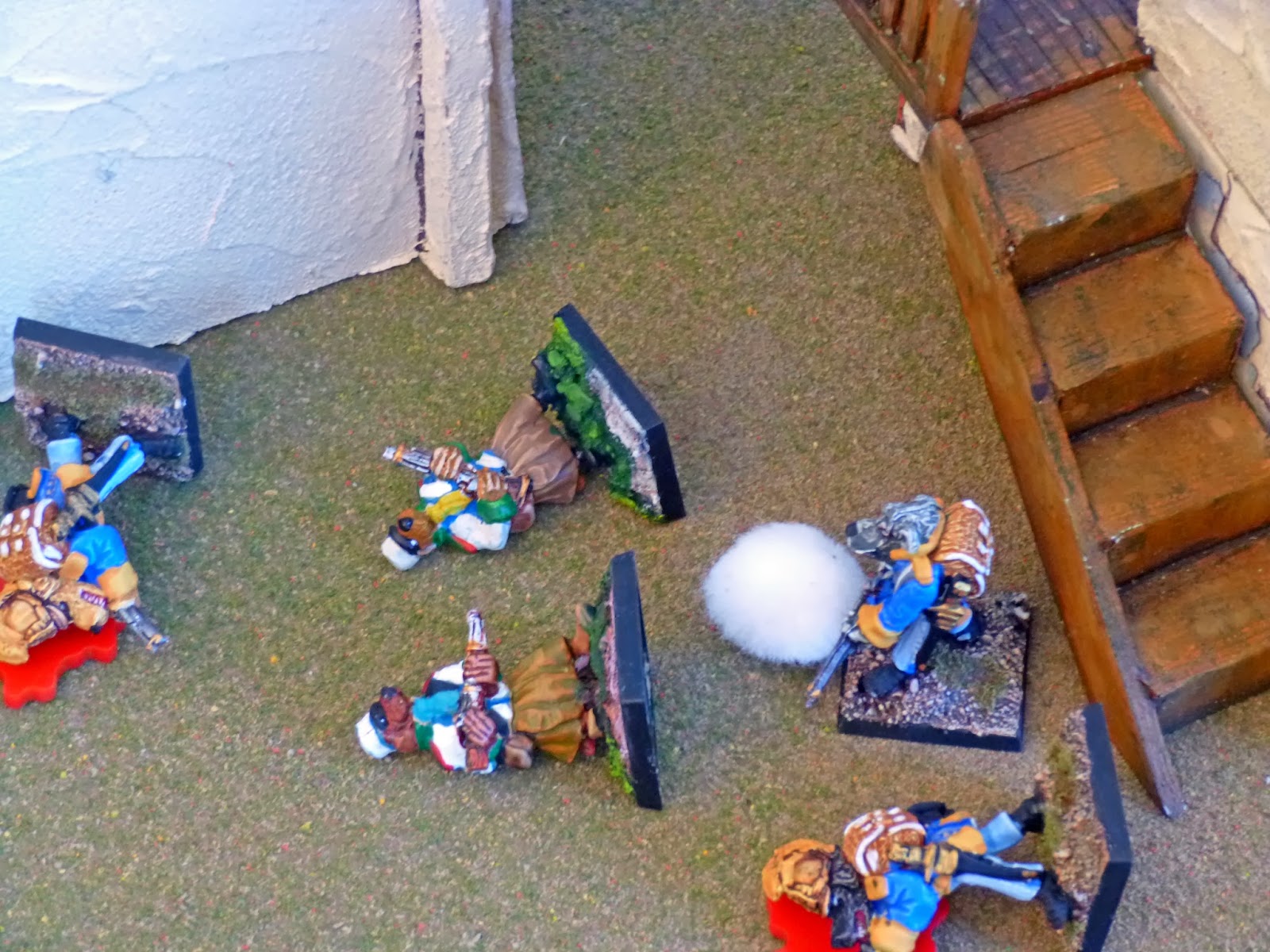 One dog put down two of his foes. 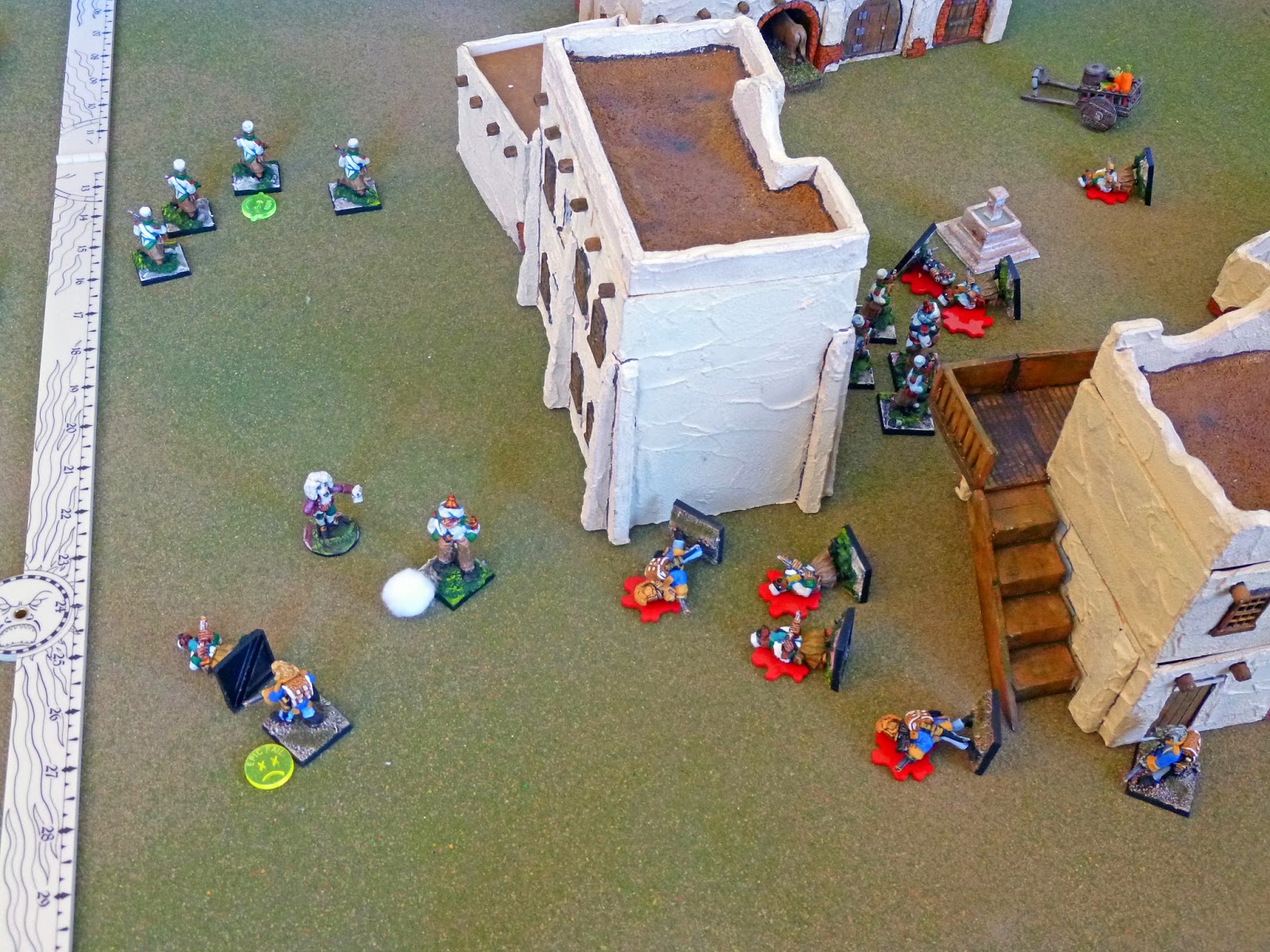 When the dust cleared, two whipped hounds remained facing the ogre officer. The dogs had so far lost one officer wounded and two other ranks slain. 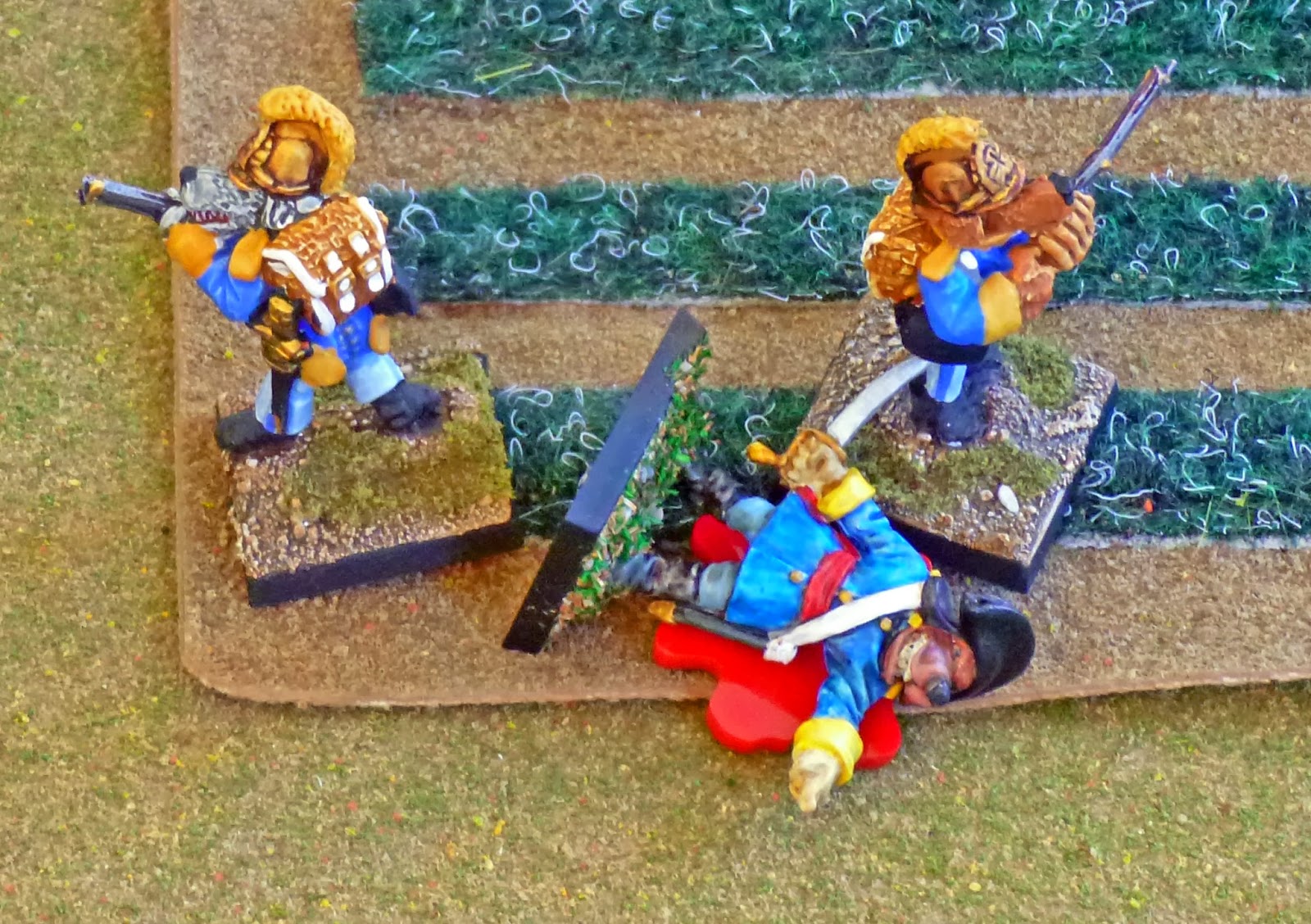 Otter pursuit was sluggish from the inn, and Buster was dragged to safety.

Unfortunately the ogre officer was able to steal Yippstadt away from the remaining dogs.

Defeat! Oh the Shame of it All.

Final tally was one dog officer wounded and two O.R.'s slain versus a loss of one otter serjeant and four O.R.'s wounded.

Eight otters had scarpered and my seven brave hounds had faced overwhelming odds in the form of 15 otters led by two ogres and a dwarf.


Still, odds are that the odds faced won't mitigate the defeat back at the Ostarian court.

Hope you enjoyed the AAr.