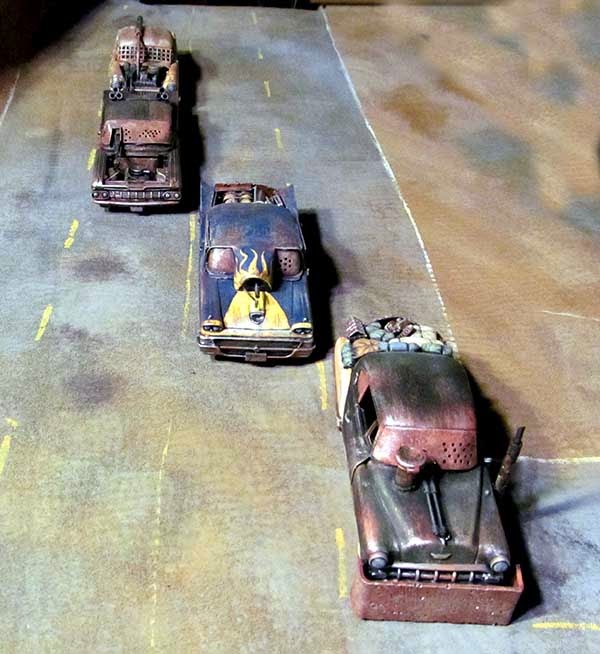 Colonel Jack knows that marauders hide everywhere, even on the fringes of the Great Desert, but he wasn’t familiar with the group chasing him that evening. They certainly weren’t Slade’s Silvers or the Running Nomads, the normal bandits in these parts.

Whoever they were, they all probably wanted the same things – gas, food, weapons, or a well-built ’54 Chevy with a Church-standard quad-feed diesel conversion engine, river snorkel, heavy ram, aft slab, and a pair of glistening, rebuilt M2 .50 cal. machine guns with 1,000 rounds of double-inspected ammunition.

The Church called it the Glorious Pathfinder of Saint Chevy; Colonel Jack called it the “Special.”
Behind him there was a Ford Fairlane, a Chevy Impala, and a ’55 Chevy. Jack was used to dodging most weapons, but he wasn’t expecting the Ford to light up the road with a flamethrower! Jack was surprised but easily dodged the attack and held his lane. 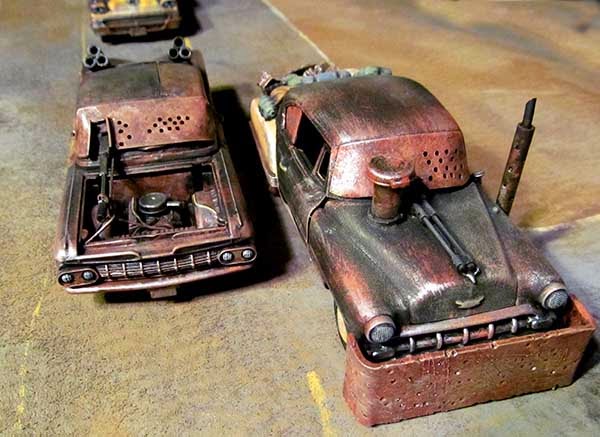 “Who in the hell would waste fuel with a weapon like that?!” Jack thought out loud.

The Ford dropped back to allow one of his comrades to attack Jack; the flamethrower is devastating if it hits, but has limited fuel. The Chevy Impala tried to line up an attack with his forward gun, but Jack’s weaving prevented the Impala from getting a good bead.

Just as the group was coming into a curve, Jack’s car fell back and collided with the Impala. Jack fought the wheel to maintain control on the curve, but the Impala wasn’t so lucky and spun out of control, and out of the chase. Luckily for his friends, the Impala spun out of the way and not straight back into them. 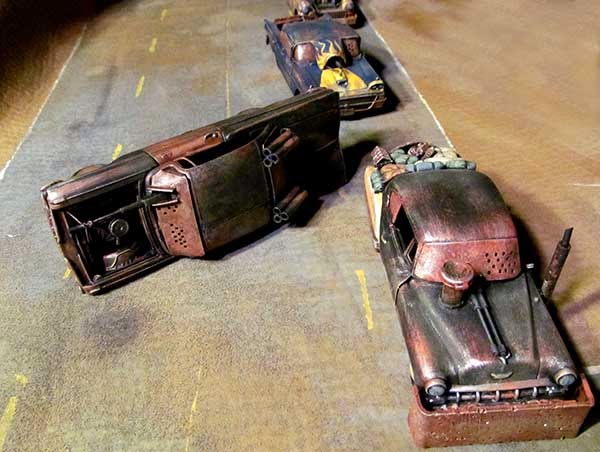 The Ford returned to light up Jack with more fire. This time the flames caught! Jack held the wheel with one hand while he fished out the fire extinguisher with the other, all at 80 miles per hour while still on the curve. 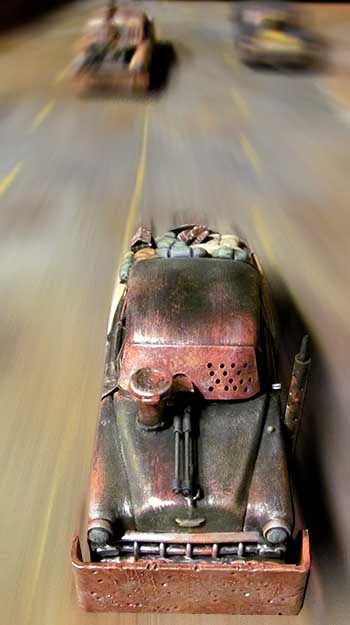 And as quickly as the chase had started, it was over. The Ford wished to conserve its remaining fuel, which it burned through quickly with the flamethrower. And the ’55 Chevy, which didn't get into the fight, seemed more intent on returning to the crashed Impala a few hundred yards back.

Jack would report back to the Oak Street Priests about the attack, and the Church would, in turn, restrict fuel shipments to the region. The reduction would drive up prices (and violence) on the black market, but marauders would be less likely to use their vehicles in crime knowing that fuel would be scarce for the next few months.