Been working on the cavalry rules. Play testing up till now has been strictly set piece. A group of horse charge a group of foot and that sort of thing.

Today was the first time they were used in a full Encounter.

This game featured Captain Renteen's company of the Ostarian Horse Marines trying to intercept the coach carrying the captive Baron Yippstadt deeper into the Otterman Empire. The strength of the enemy's escort was not known. 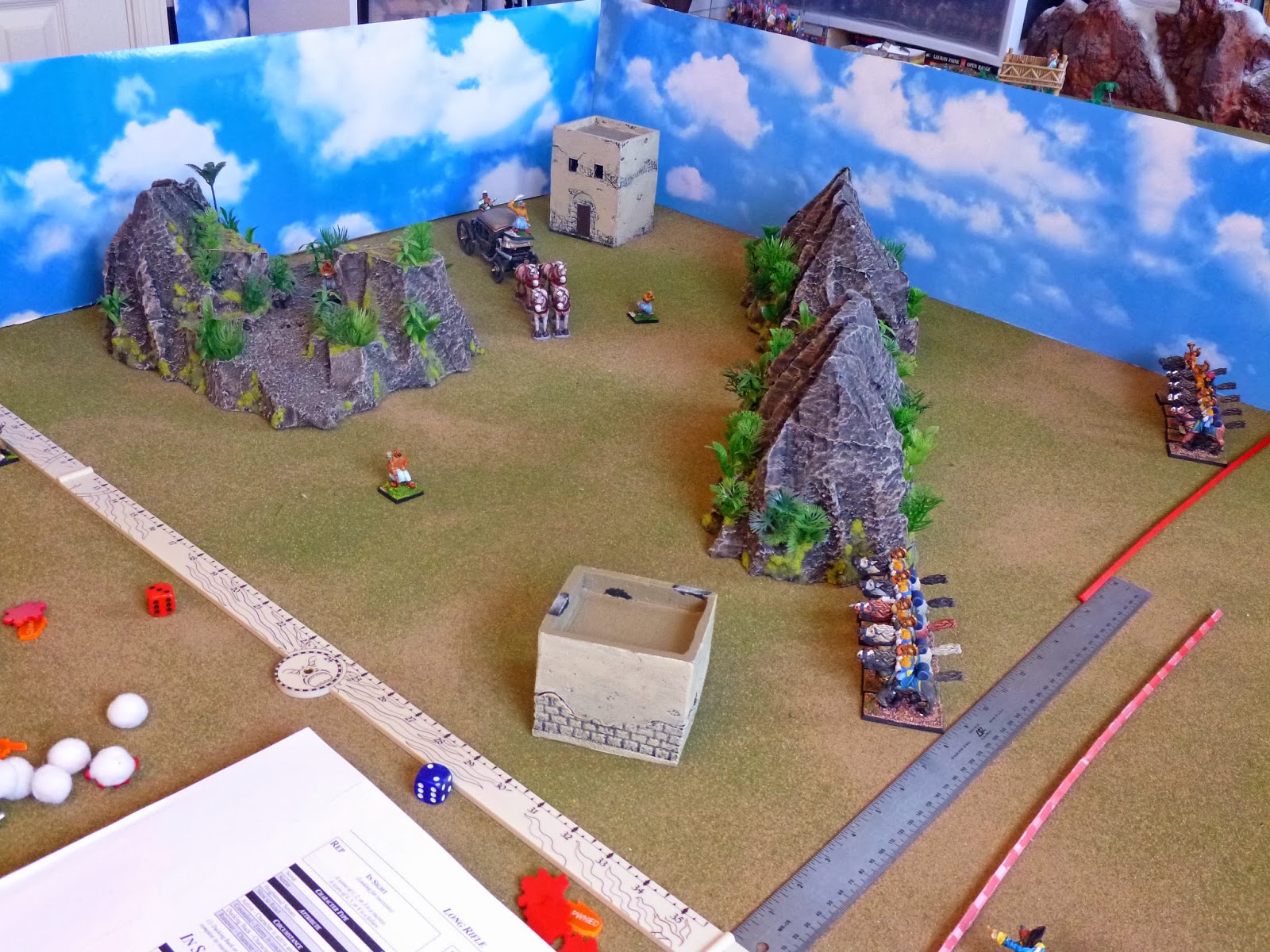 My force consisted of one officer, one serjeant and eight dragoon O.R.'s. The terrain, as may be seen from the photo above was rather cut into channels by steep hills.

My plan was to have the serjeant take half the troops and swing around from my left. Hopefully this would draw the enemy out, revealing the Possible Enemy Forces (PEF's), and with some luck, causing them to empty their firelocks. 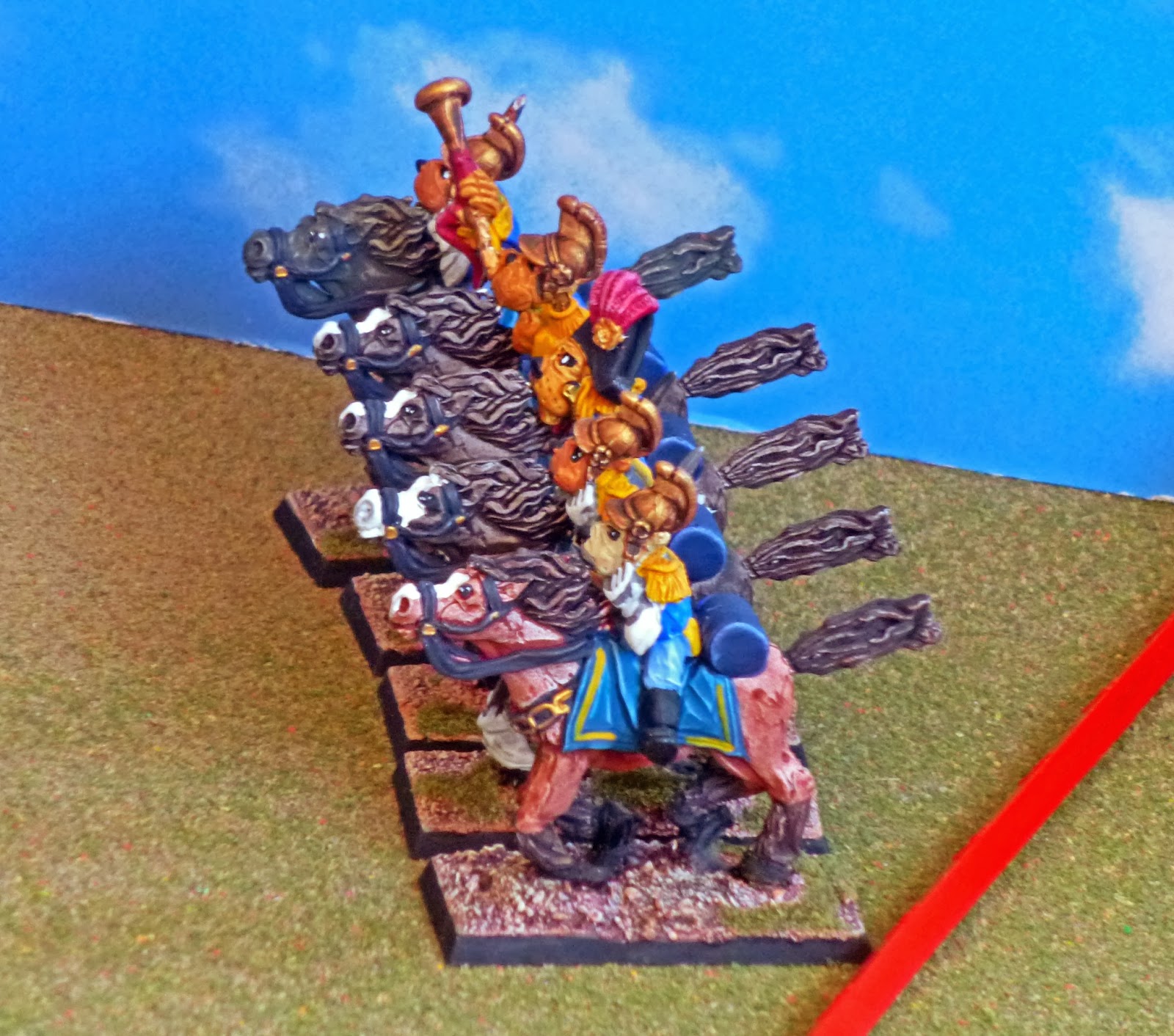 Then the other half of the troop, led by Renteen himself, would advance up the center and send the otters packing. 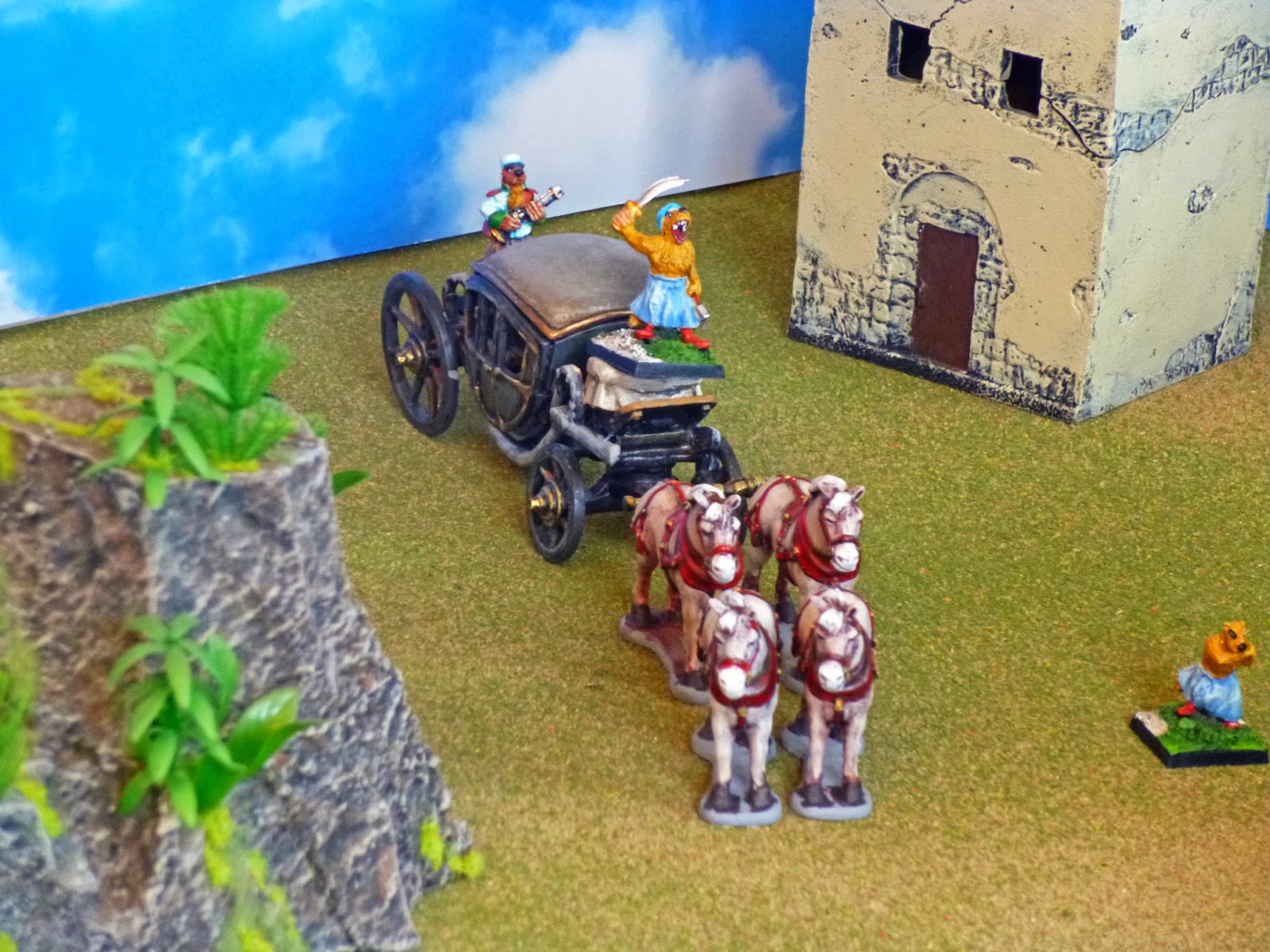 The otter PEF to my left  could not be placed out of sight of my pups, and so was immediately revealed.The PEF was reolved as a false alarm and removed from play. That left only two. One concealed in the rocky outcrop on the enemy side of the center, and one right by the coach carrying the captive aristo. 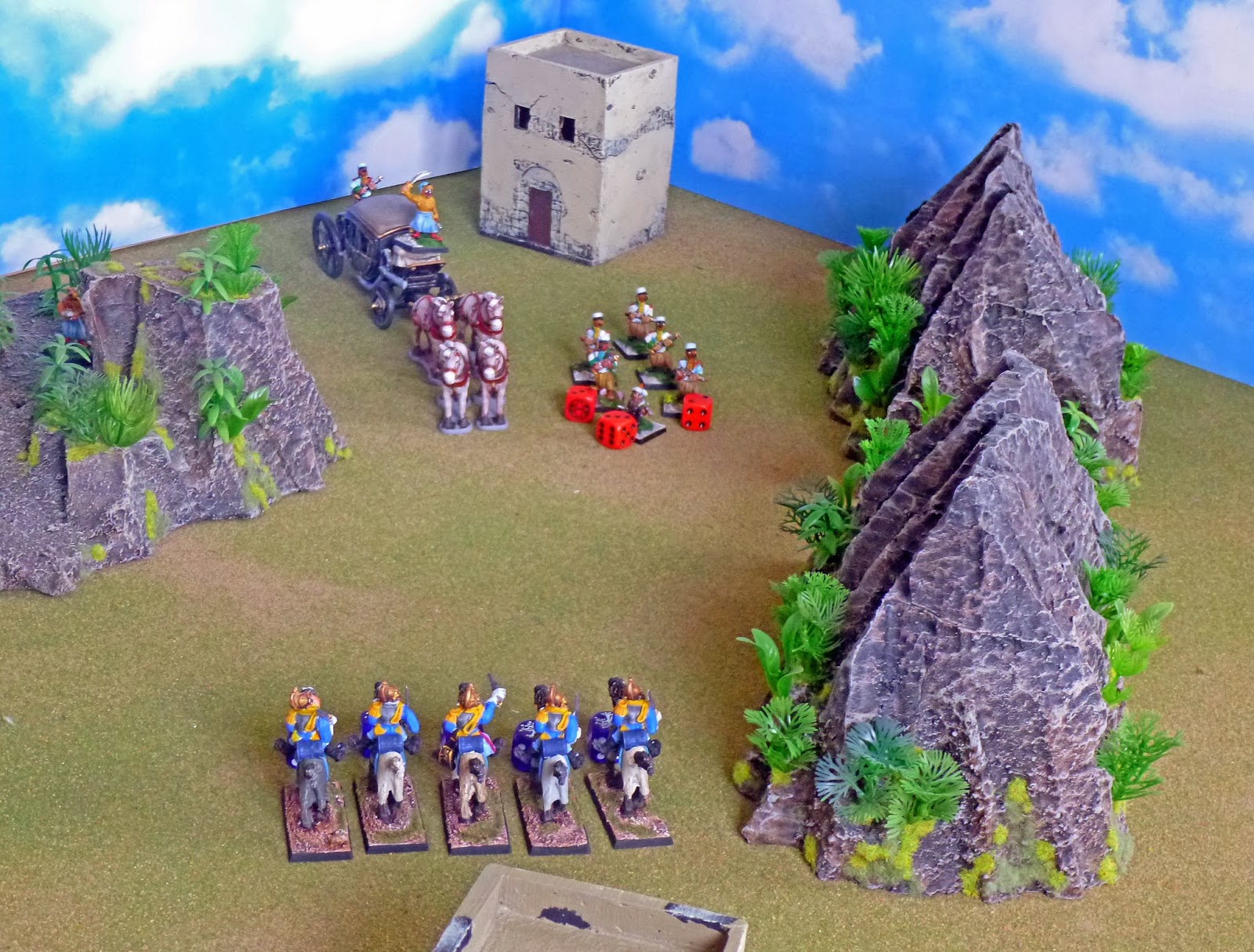 Serjeant Rottweiler led his section from the left as planned.

The PEF by the coach was revealed to be five otters and a dwarven serjeant.

The PEF in the rocks remained out of sight for now. 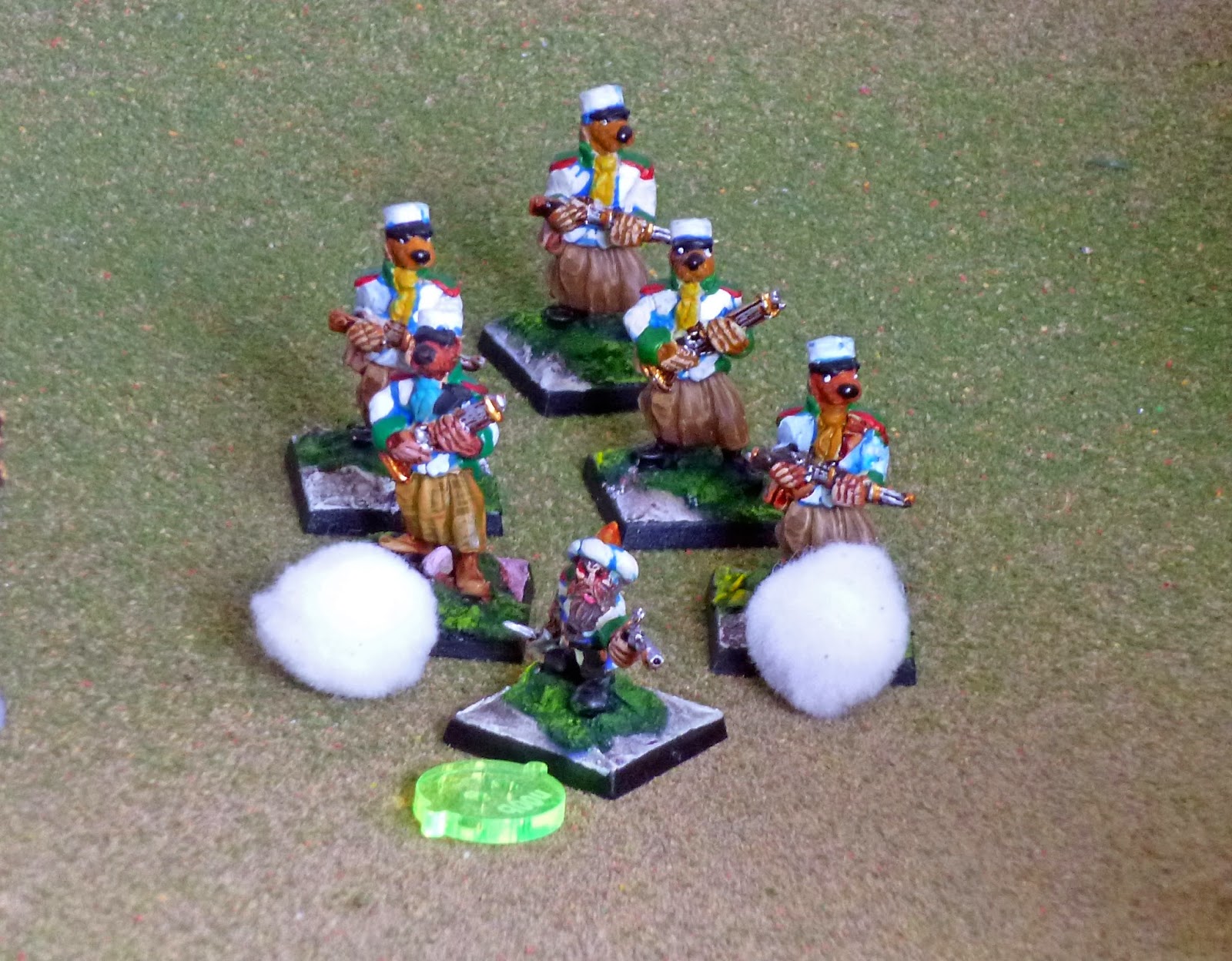 The otters were caught unawares, on the march. Never-the-less they reacted quickly, the front two and the serjeant firing. Well the serjeant tried to shoot but missed fire.

Both shots were well wide of the mark. Tow of my dogs took a received fire test and passed. 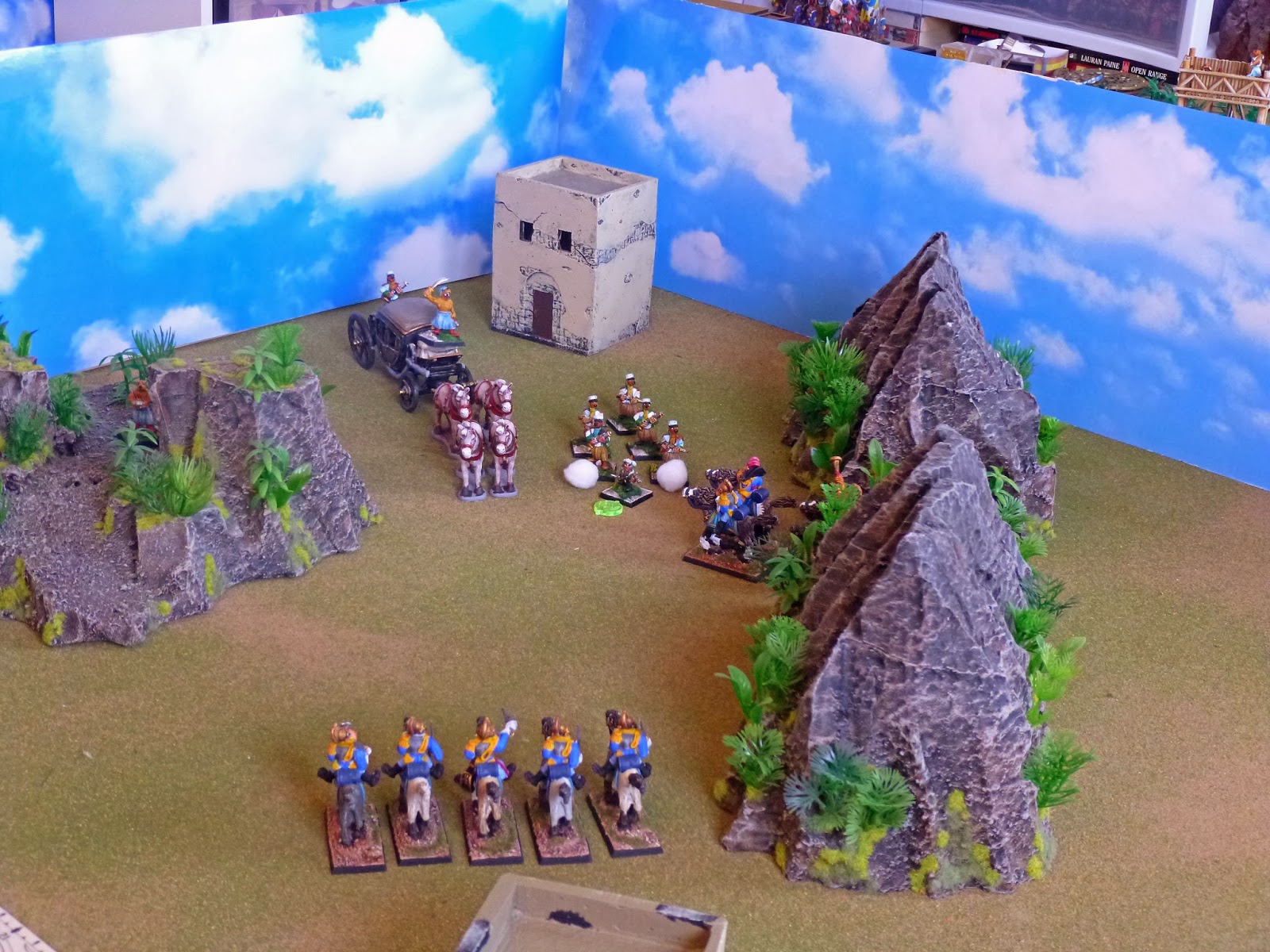 Now Renteen led his pups up the middle. With the front few otters already having fired and the view of the rest obscured, Renteen avoided any gunfire on the way in. 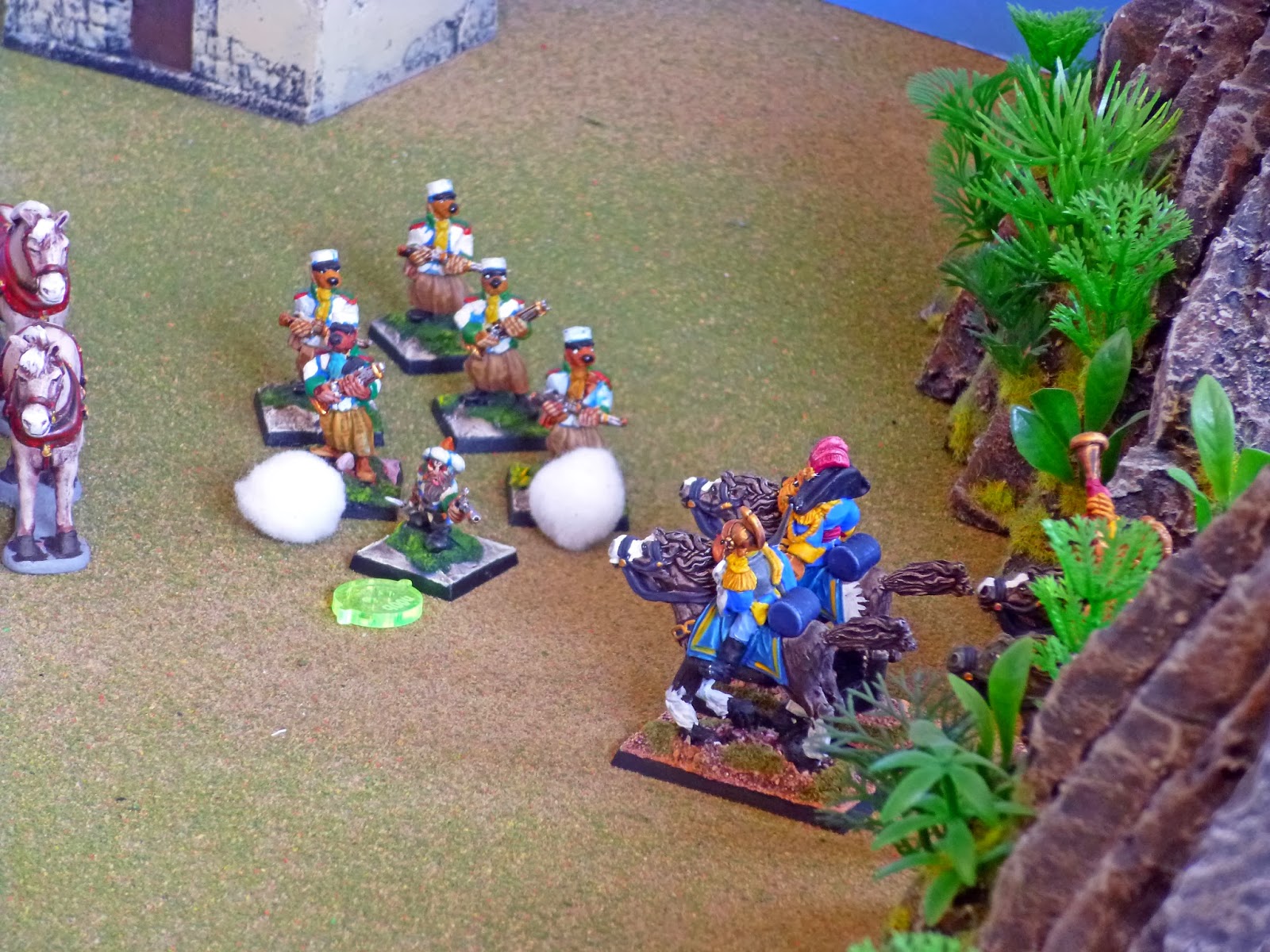 Both sides did well on their proximity tests and the horsedogs were in among the otters! 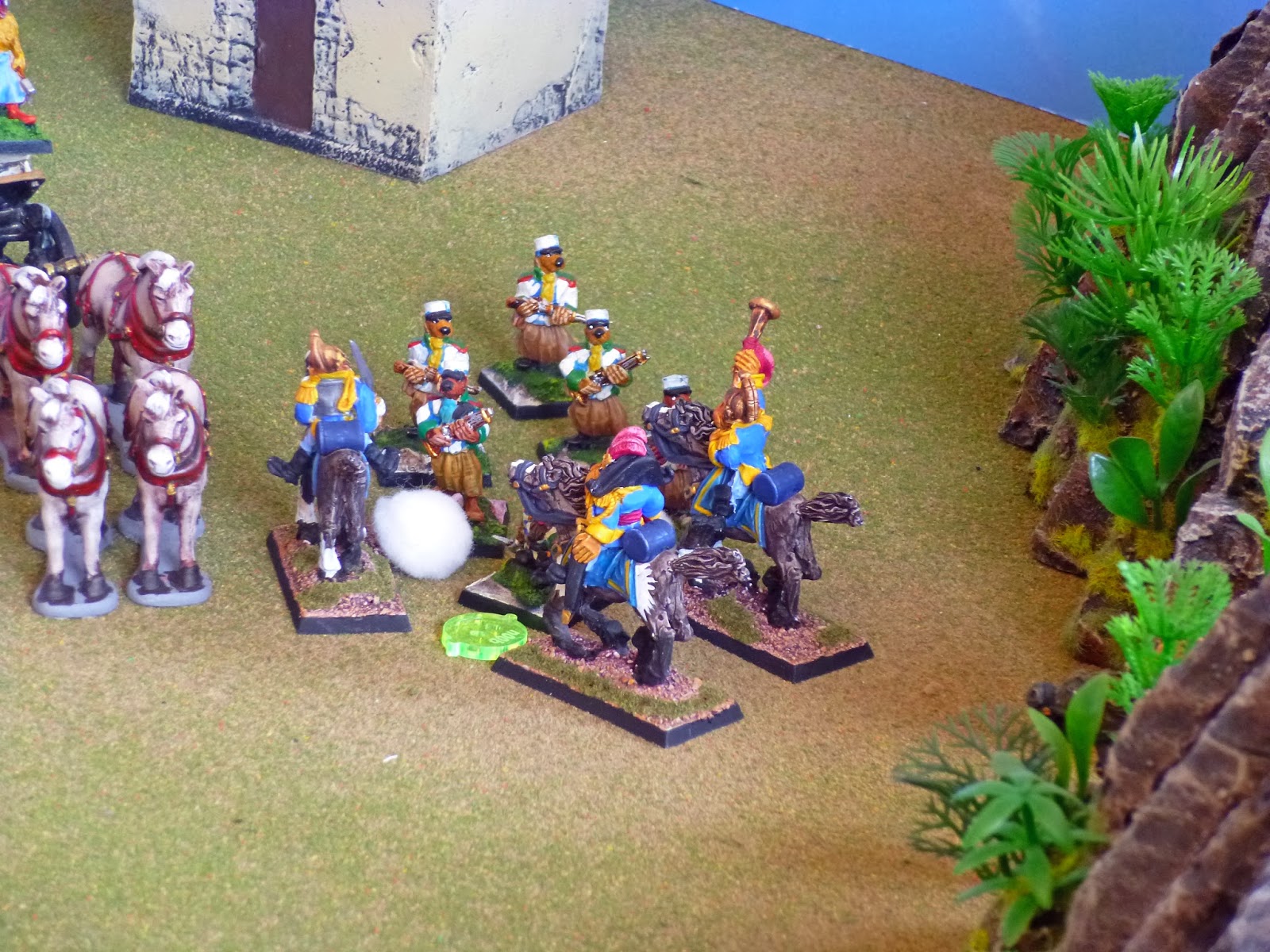 The first three dogs knocked down one otter in the front rank and proceeded on to the second. 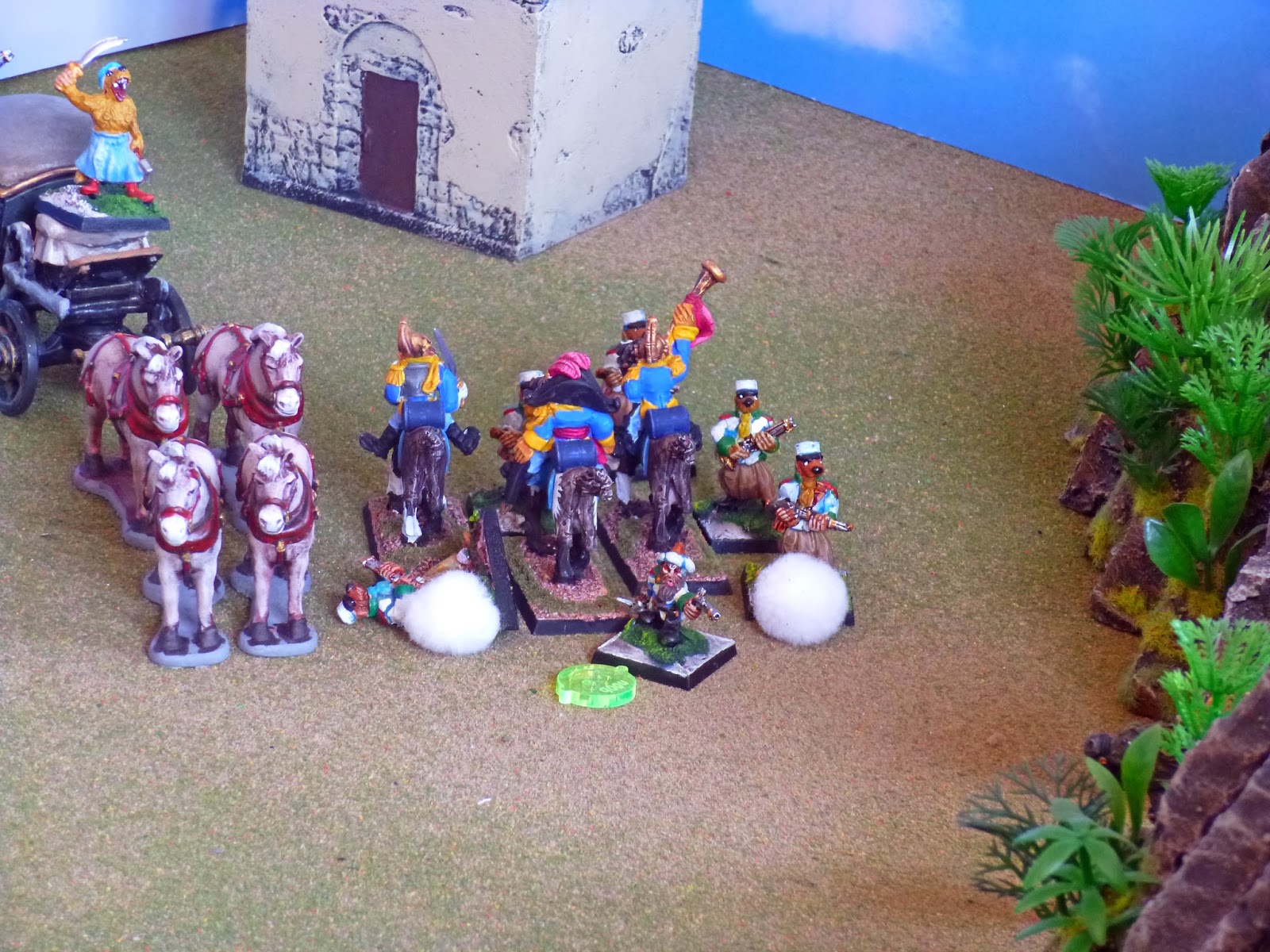 More otters were knocked to the ground as the first wave completed its charge, 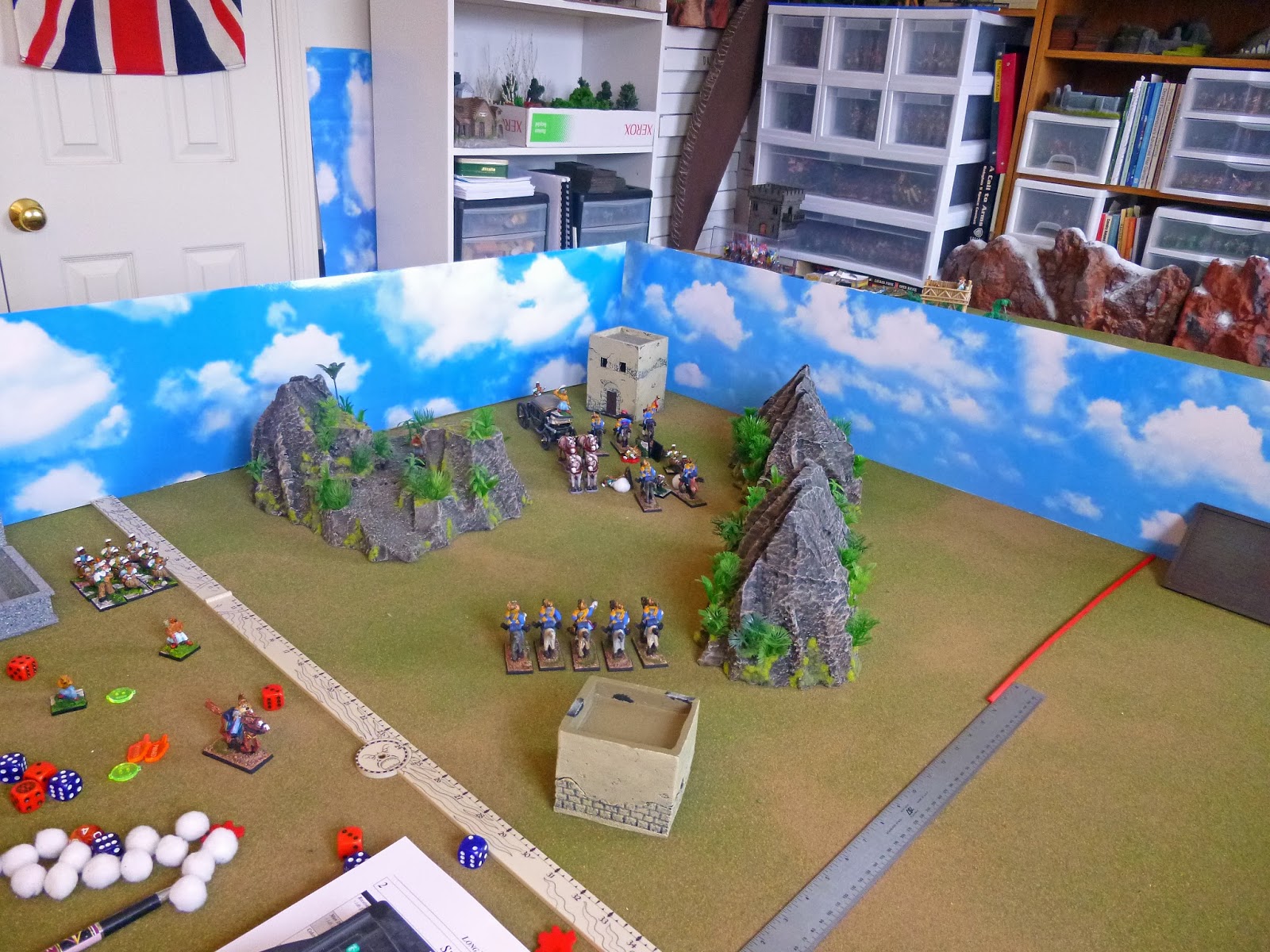 Now it was time for the two dogs of the second wave. 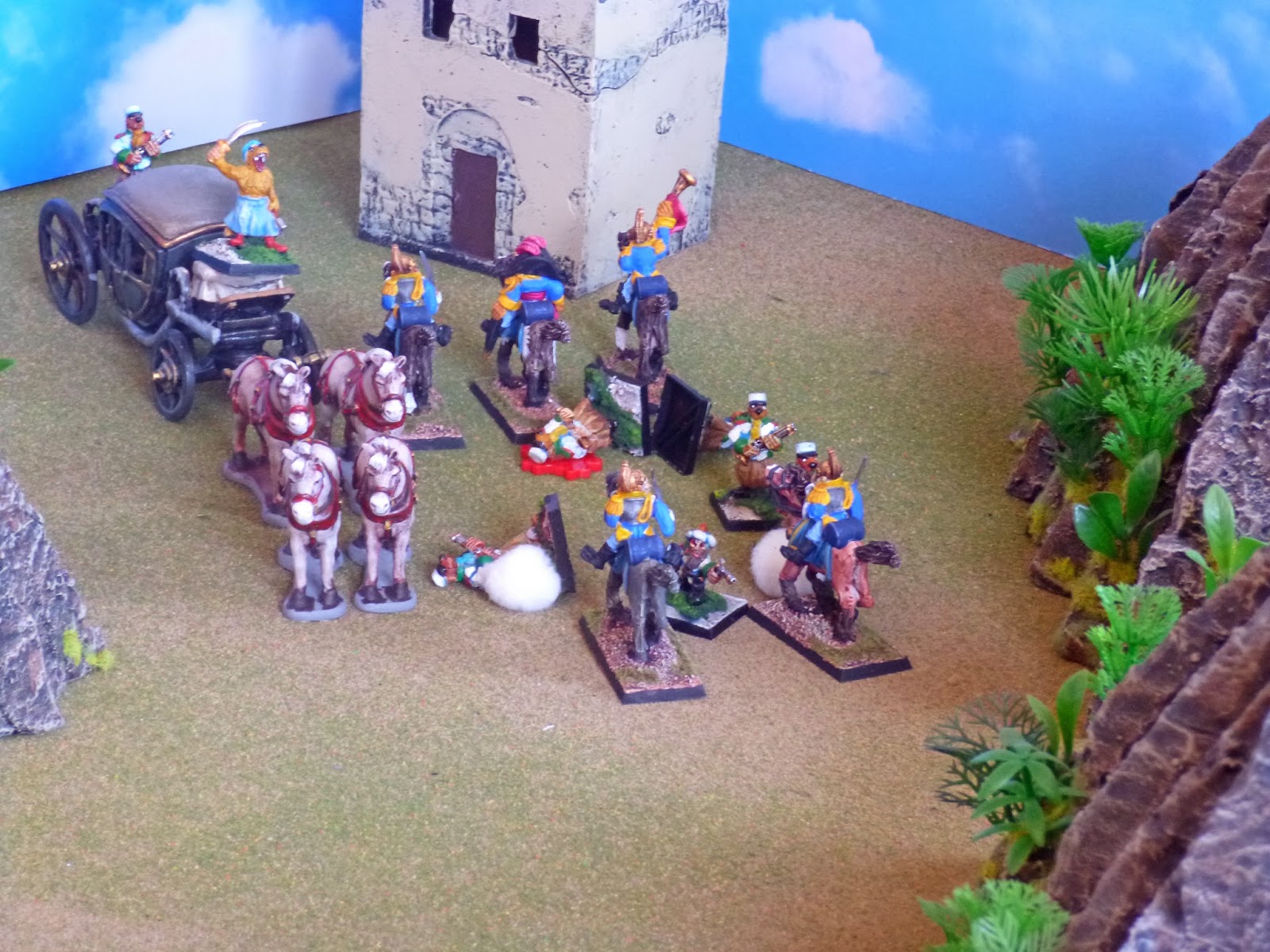 The second wave knocked down one more otter, and the serjeant as well, but the combat was not all one sided. 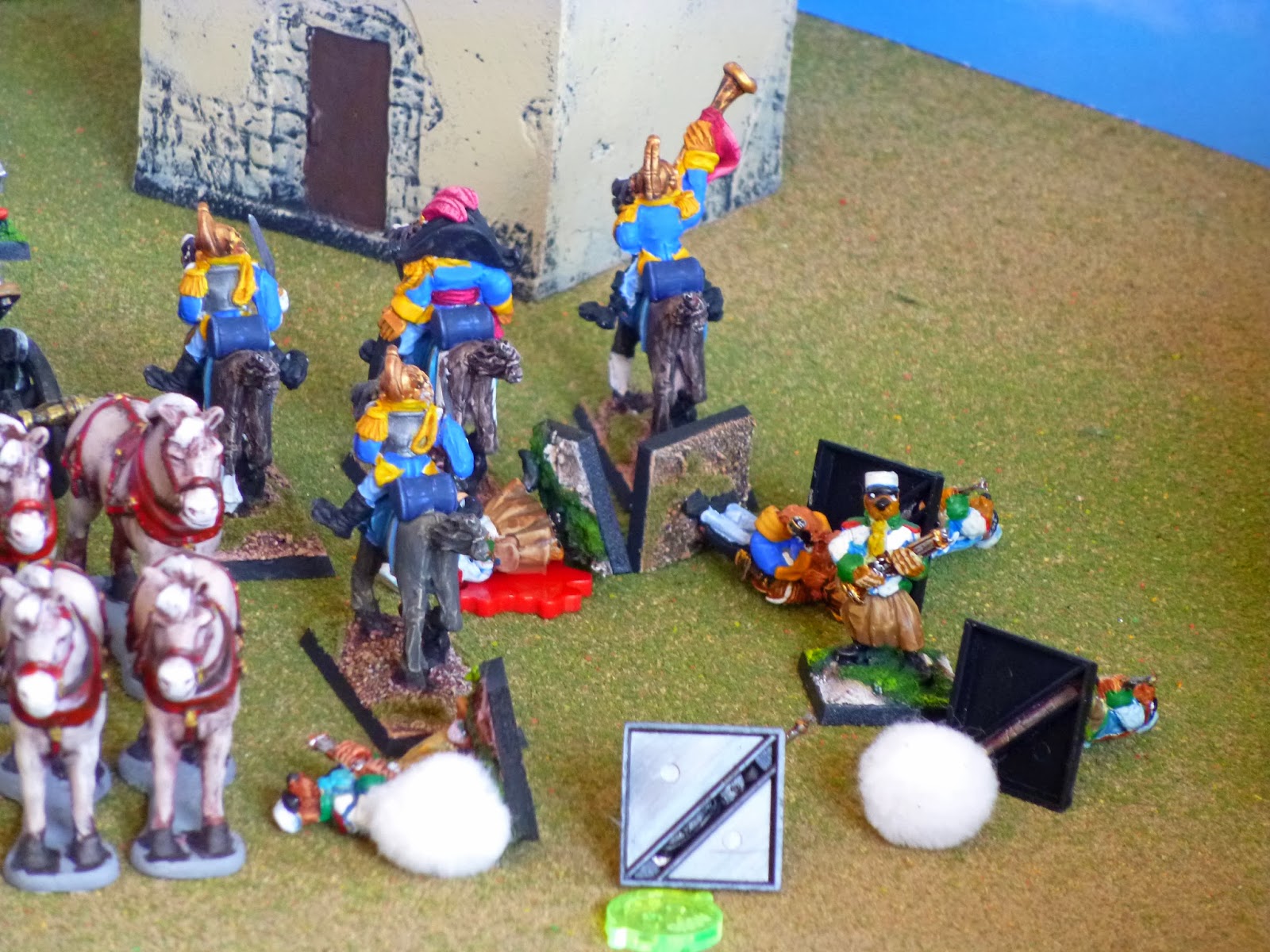 One of the otters managed to wound a horse. The dragoon was unable to control the beast and was thrown. 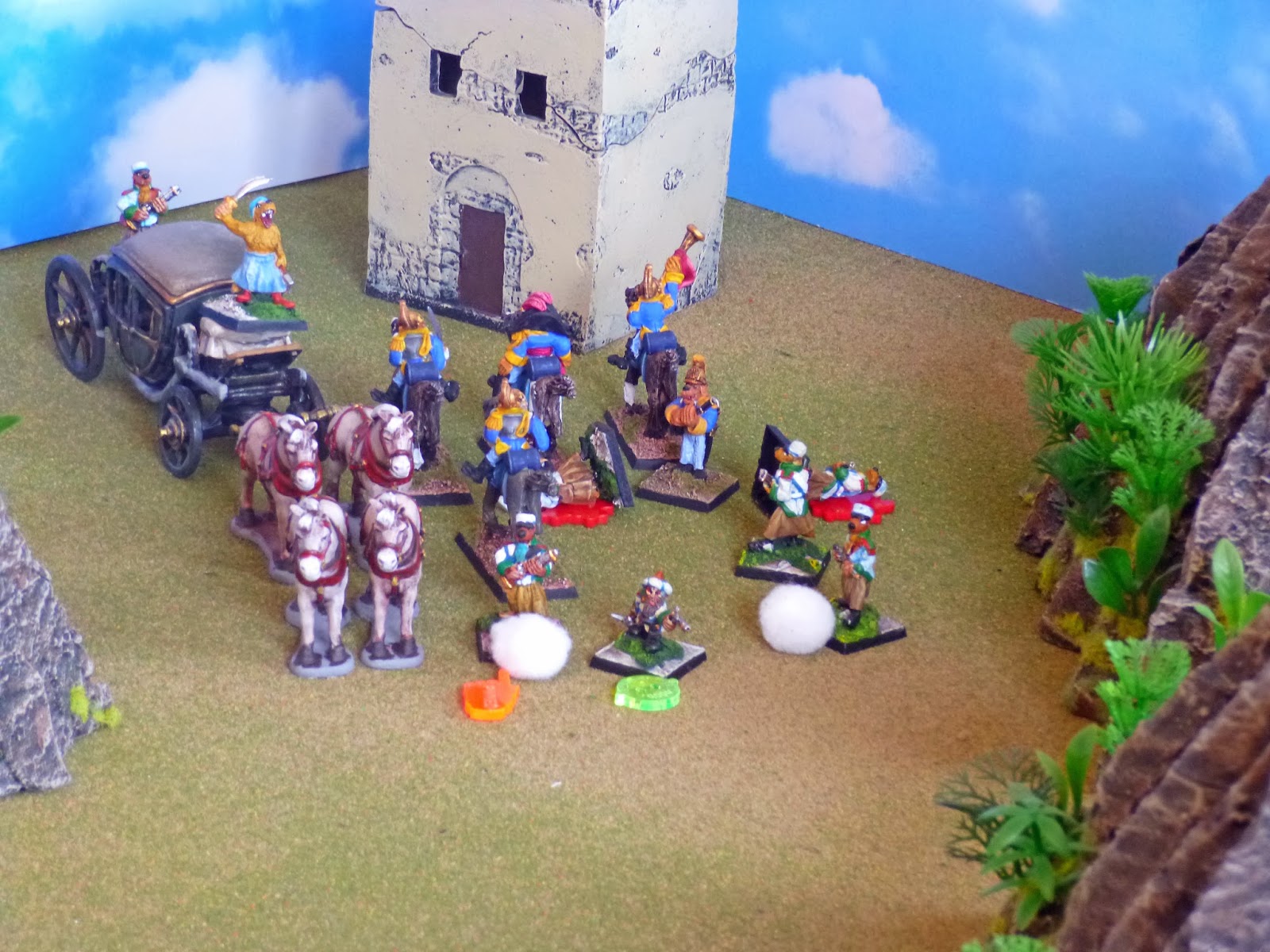 After the melee was resolved the knocked down figures were tested for recovery. 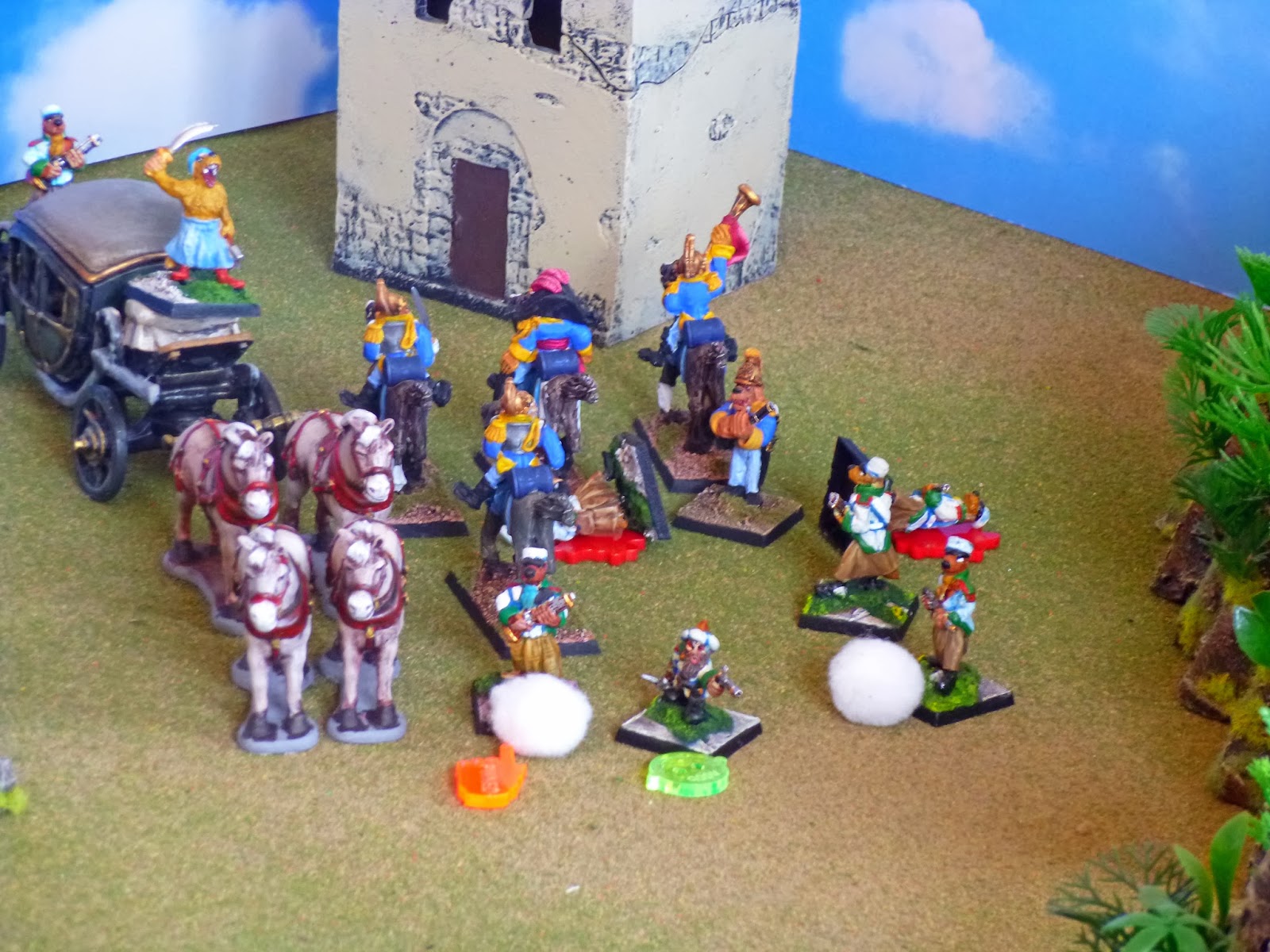 One otter dropped out of the fight, and one was shaken. The serjeant and t'other otter recovered fully, as did the thrown dragoon. 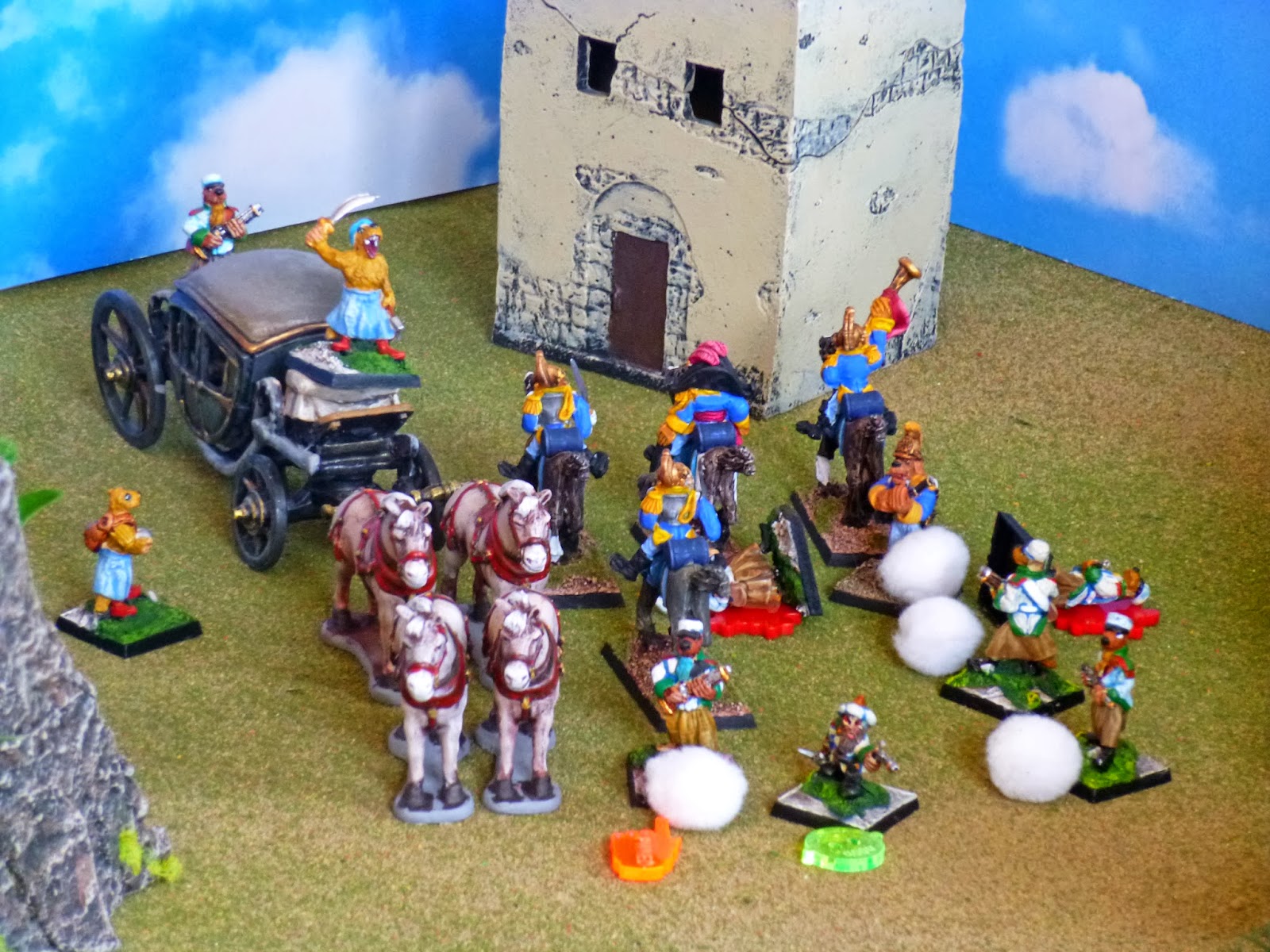 It was now the otters' turn.

The PEF in the rocks advanced and proved to be...nothing at all.

Three of the four remaining enemy had already fired, the fourth exchanged shots with a dragoon. Both shots missed. 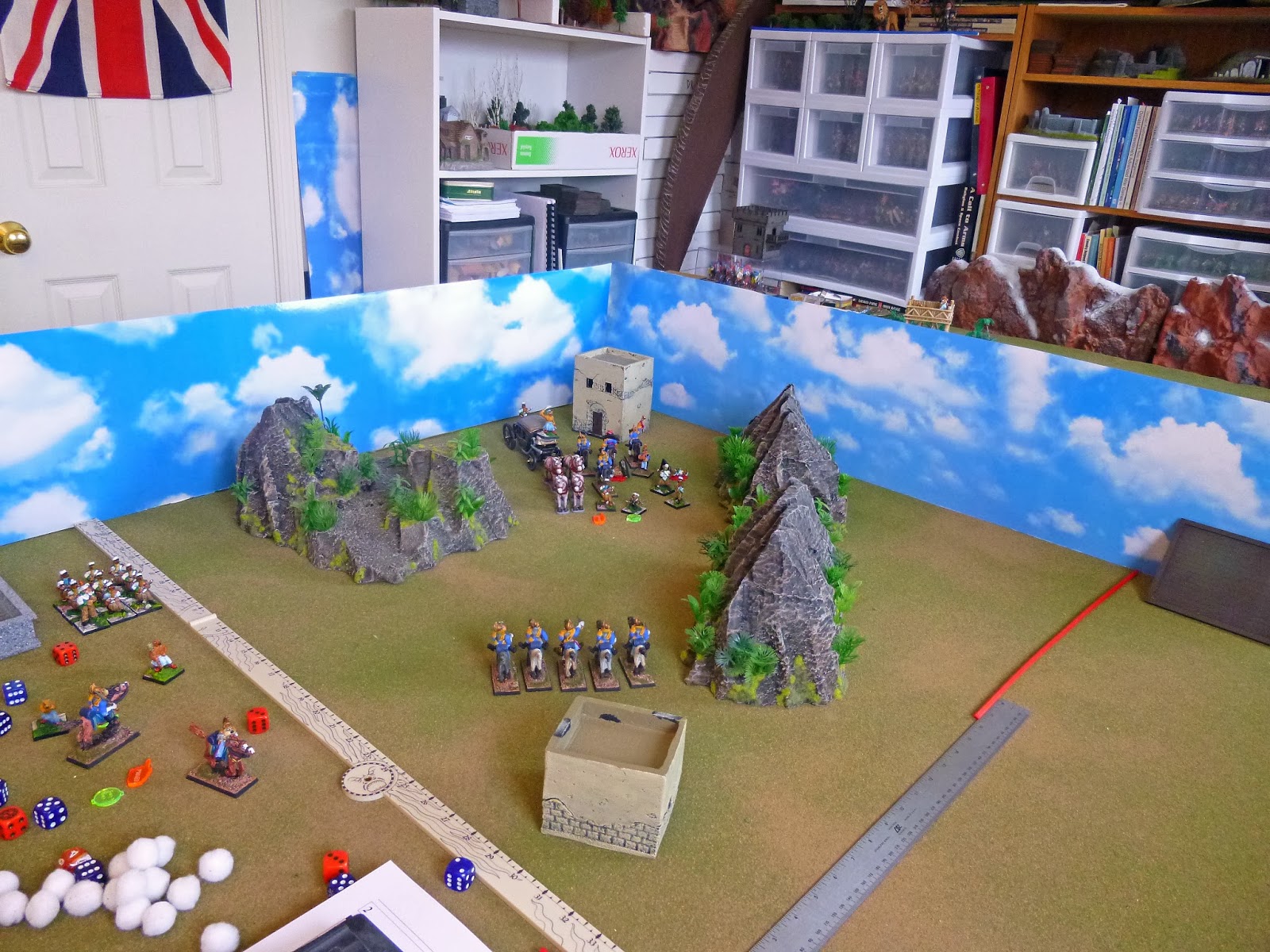 That finished the first turn. 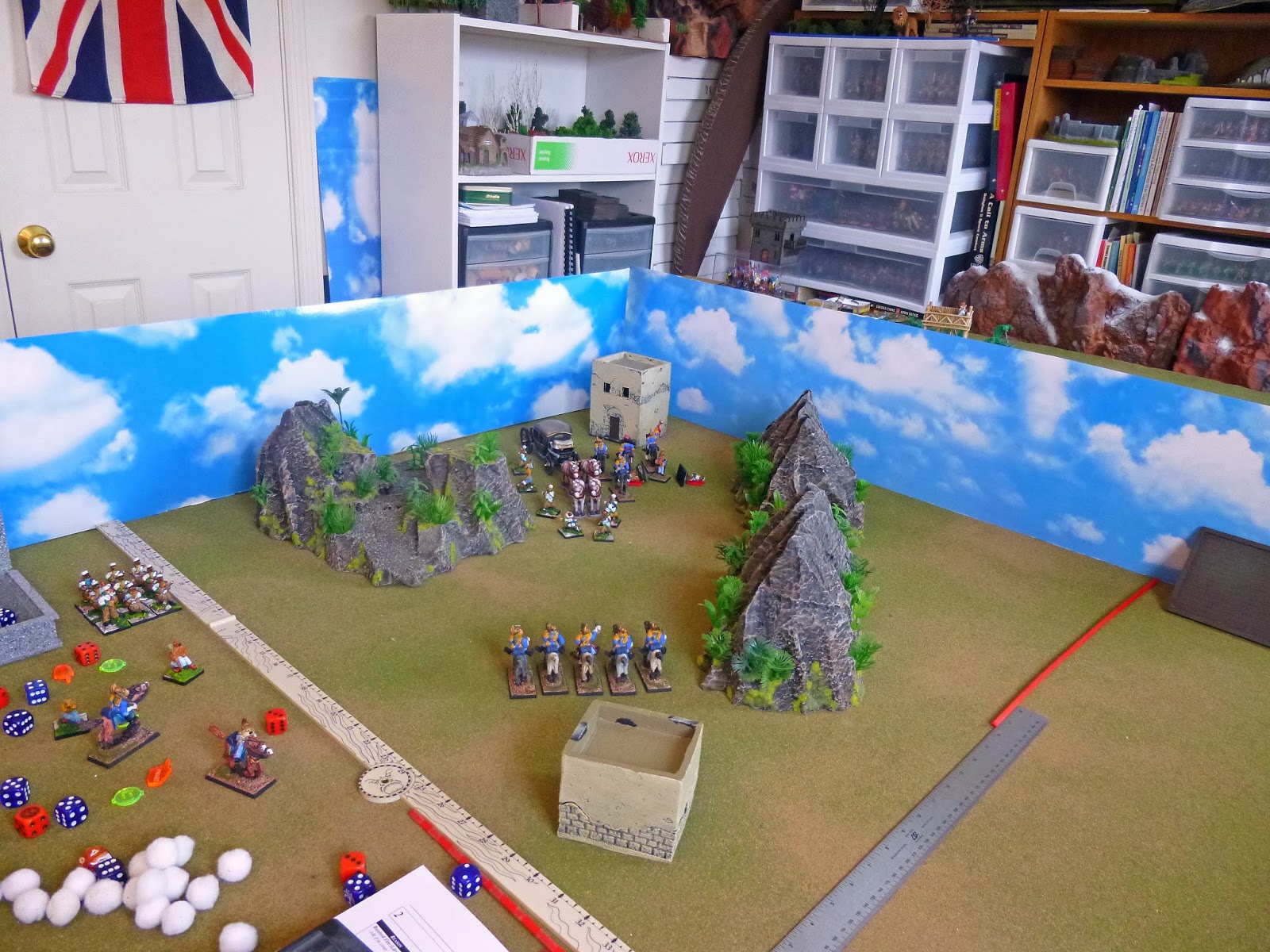 The otters activated first on the second turn... 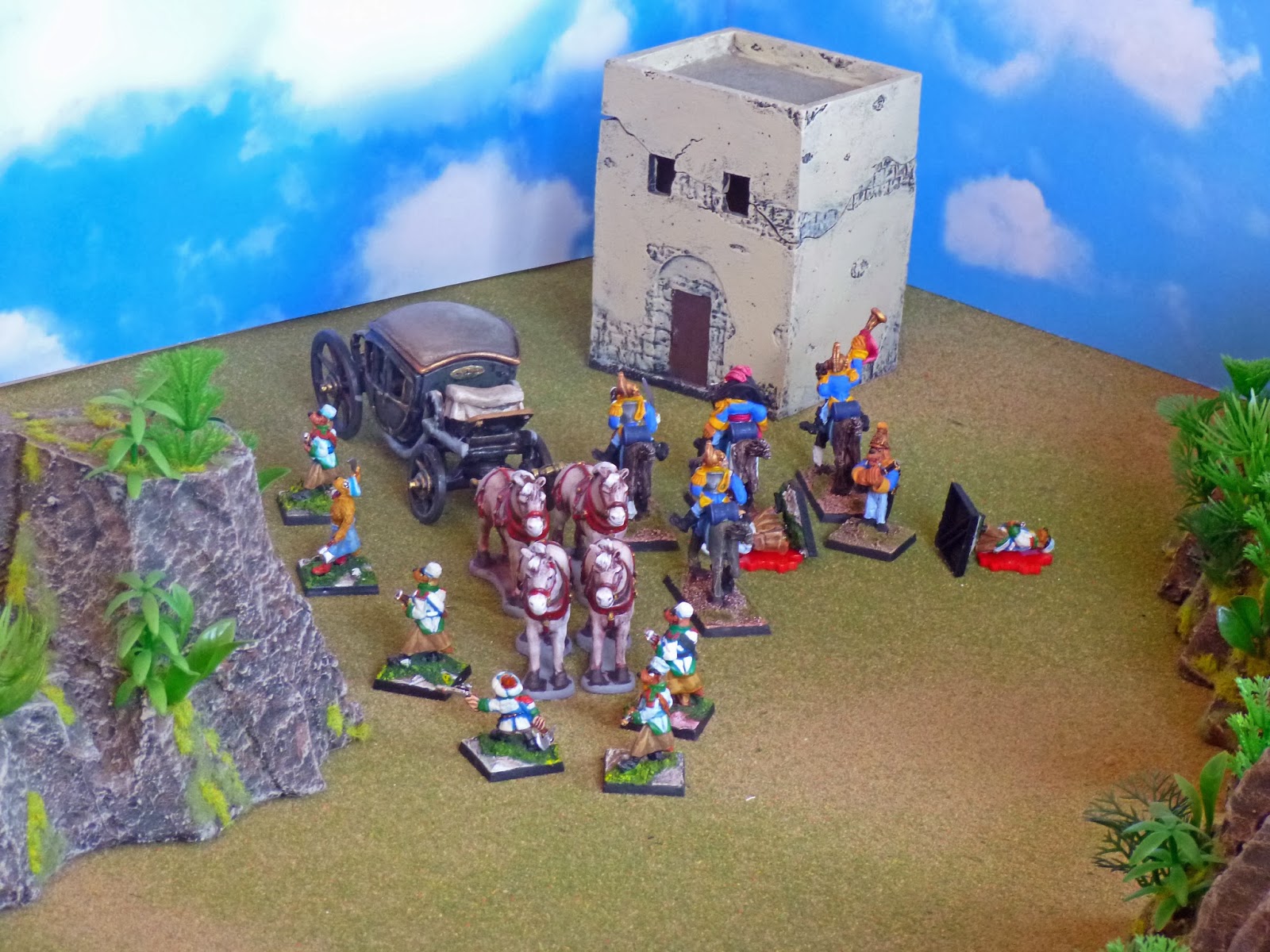 Yippstadt was rescued and there was much rejoicing.

Quite a change from the previous game. Quick to play and very enjoyable

Luck was with the dogs this time as they caught the enemy off guard and in small numbers.

Hope you enjoyed the action!