Machinas: Many races to choose from 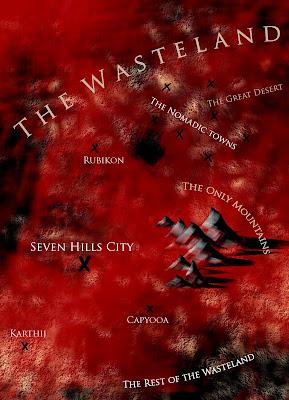 Capyooa offers the short "Selector" races. In the Selectors, after each lap, the vehicle in last place must quit the race (he is "selected"), the final vehicle left on the track being the winner. In the Selectors, the length of a race is determined by the number of cars (one lap per car minus one.)

Karthij gives beginners a chance to test their driving skills in the relatively safe "Mercury Sprints." The Sprints are quick, two-lap races designed to prevent excessive damage to the vehicles, since finding replacement parts is a little more difficult in the southern parts of the Wasteland.

In Rubikon, Brother Pilots can race in the merciless "Machinas Mordem," a race which is not raced to the finish, but rather, to the death. Most of the other races can be run to the death, and are referred to as "Mordem" races.

Along the base of the Only Mountains, drivers can barrel back-and-forth down old switchbacks of a "Mountain Flyer" race. Any driver unlucky enough to swerve or get pushed off the wrong side of the track usually ends up at the bottom of a rocky cliff.

The Nomadic Towns often run the "Scrappers." Before a scrapper, cars are required to remove all of their existing weapons and defensive measures. One of these removed items must be thrown into the prize pile. Then each participant, through a simple lottery, is given a random weapon or defensive measure (other than those in the prize pile.) The winner of the race wins half the pile, while the other half is divided between the second-place car and the town that is hosting the race. All other racers lose those items put into the pile but may keep that item that was randomly selected during the pre-race lottery.

And along the northern borders of the Nomadic Towns, against the edge of the Great Desert, Brother Pilots can race along the Paved Plains, a 500-mile stretch of sand where the paved remnants of an ancient highway system can be found. Very few can remember the direction of every turn in the highway, and the shifting sands cover and uncover different sections, so the race routes vary from month to month.

Most races in Machinas simply change the goal of the race and can be applied to any track, but the last couple examples mentioned -- the Mountain and Paved Plains races -- have race-specific tracks.

The Paved Plains race is difficult because no one knows the entire path of the race, which direction the next turn will be, or how long the current straightaway will last. Each section is determined just before the pack of racers reach it. Many cars are built for balance between racing on the known number of turns or straights, but the distribution of turns and straights on the ancient highway is unknown, so it's difficult to customize a vehicle for such a race.

You can create your own tracks -- any oval, sprint track, or mountain path is simple and easy to map out before each race -- but Machinas also includes simple rules for determining a random route when racing along the Paved Plains (or for those who are simply want to explore the ancient geography of the Known Wastes.)

Each of these races requires a different focus on your vehicle; some races reward better firepower while others are better for those who bring more speed or control.

For a challenge, some Brother Pilots build "Campaign cars," infernals with a good balance of customizations that can survive racing in all styles of race. Give it a try: Build one car and race it in at least one of every race detailed here, and see if you can finish all of them.

Sometimes -- most times -- a race is not for competition, but for survival. You might find yourself on an ancient highway being chased by fuel marauders. Hopefully, you've had enough practice racing to know how to outrun your pursuers. Having that perfectly customized car helps, too.
Posted by Evilcartoonist at 18:17
Email ThisBlogThis!Share to TwitterShare to FacebookShare to Pinterest
Labels: After the Horsemen, Kickstarter, Machinas, Stock Cars, Two Hour RPGs, Two Hour Wargames