Here's a NUTS AAR I played recently. The pictures will tell the story and underneath I'll get into more details.
I started with a Rep 5 Star, NCO Adams and rolled up nine more squad members. For simplicity I named them in alphabetical order. Here's the Infantry Roster.

I'm using all the rules, including the Chocolate and Cigarettes section. Wheather you choose to use the section or not, the first Mission you will have is a Patrol. This is my first Mission, Italy, February '44.
I roll up terrain, play on  a card table and gather my squad. I split it into two sections. I command the one on the left, with the BAR gunner and send the other, commanded by Corporal Holmes, to the right. We both start in woods. We enter the table. 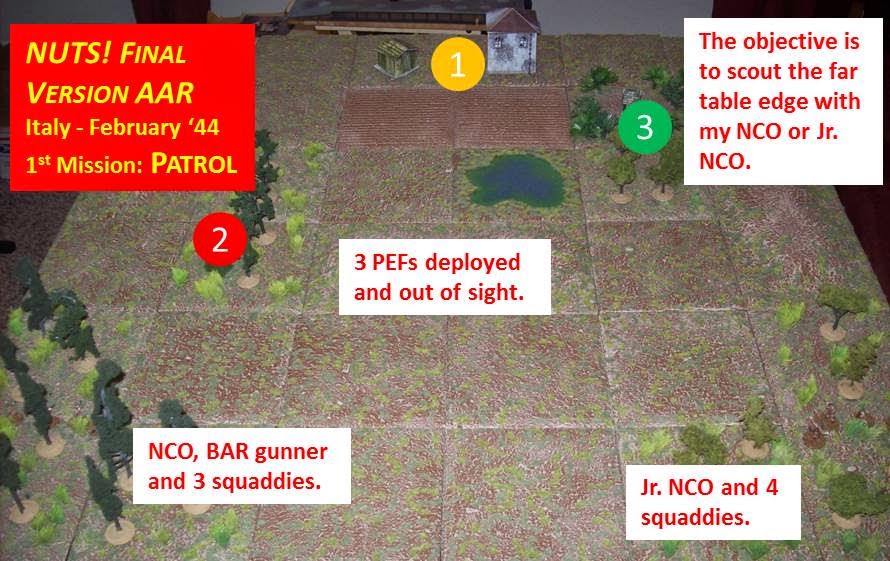 PEFs, Possible Enemy Force markers are rolled then for and placed on the table.
Activation dice are rolled and we move first. 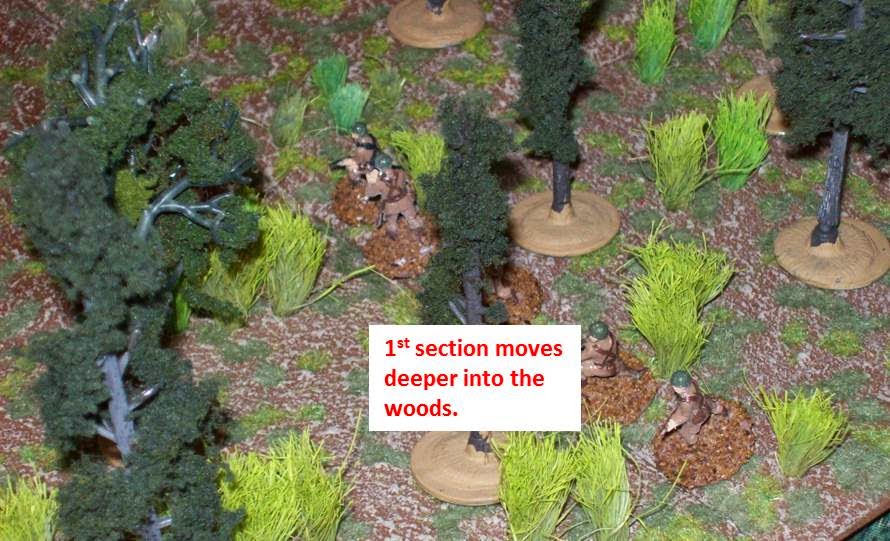 After the sections have moved to the edges of the woods the PEFs move. The farthest one goes first; Orange moves into the field.
Green, moves next and slowly moves towards 2nd section.
Red moves through the woods and to the edge and in sight of 1st section. The PEF is resolved as contact. But when rolling on the German Reinforcement Table, a "1" is scored. With the low Enemy Investment level of 3, this results in no reinforcements! A lucky break on my part. 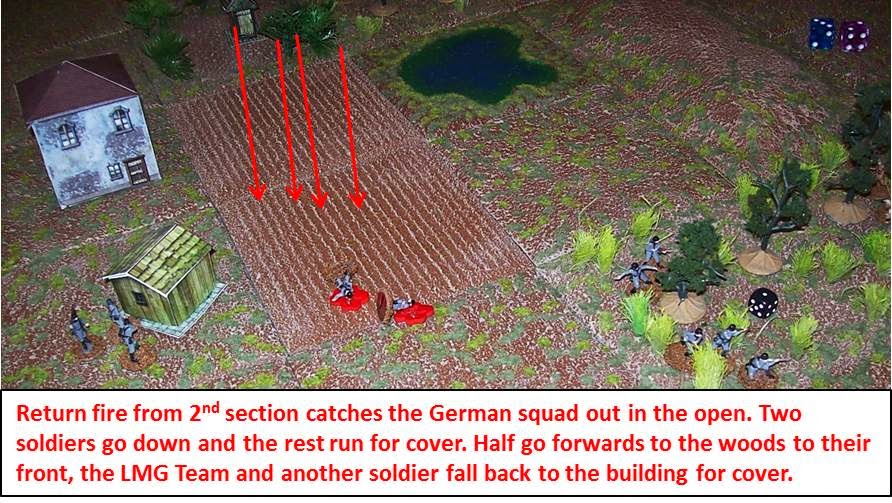 Next turn the Green PEF moves into sight of 2nd section and is resolved as nothing. Two PDFs resolved and no enemies! This is looking like a cake walk.

The Orange PEF moves into sight of 2nd section and resolved. This time it's a full German squad. But they are in the open and moving so.... of course my Jr. NCO rolls terrible and the Germans go first. Five soldiers fire, Holmes is hit and Jackson goes Obviously Dead.

This is where NUTS! Final Version deviates from the normal In Sight. Instead of both sides taking their In Sight actions, only the side that wins the In Sight can act. After they have finished, the other side must react.

2nd section takes the Crisis Test for having a Man Down and passes, as Holmes was only knocked down. The section now active fires and takes out two soldiers. This causes the Germans to react and duck back, splitting up and heading to the closest cover, some forward and some back. 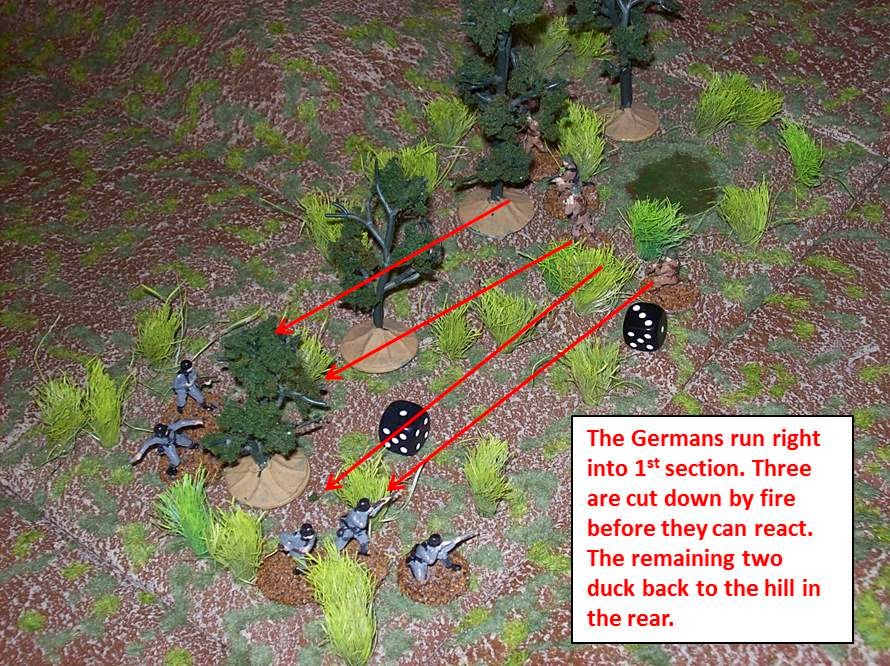 The ones going forward run right into 1st section and get chewed up pretty badly, outgunned and duck back over the hill. 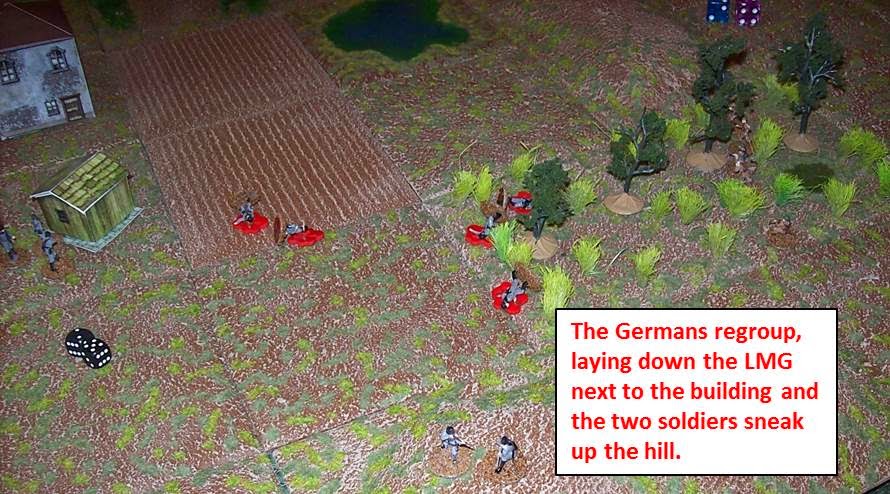 The Germans are split into two groups and its now time to see what their overall reaction will be. They were on Patrol but now go to the defensive. There movement is now controlled by the Non-Player Defensive Movement Tabls, based on their new posture. 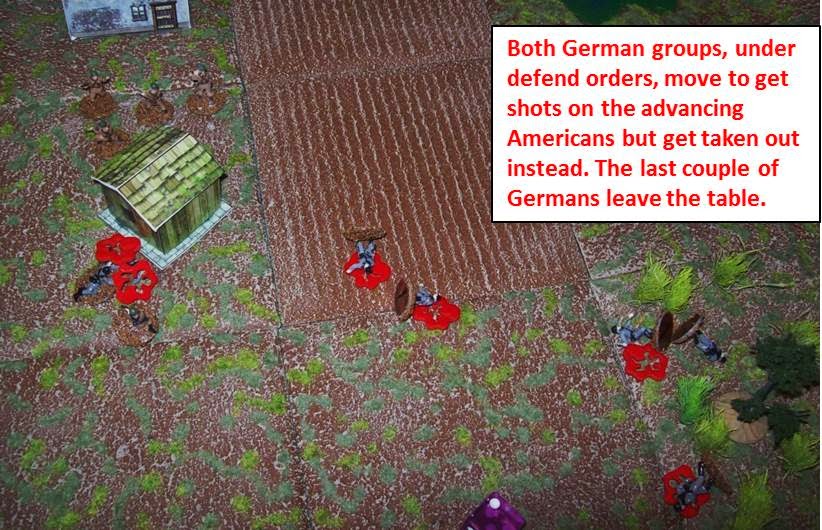 The fight goes against them as they lose both In Sights while trying to get into position to shoot. With all the PEFs resolved and no enemy on the table all I have to watch out for is possible German reinforcements, if the Activation Dice come up "7" and they score higher.

Then it happens. Random Event. Artillery Strike right on 1st section. Luckily only Iverson was hurt. 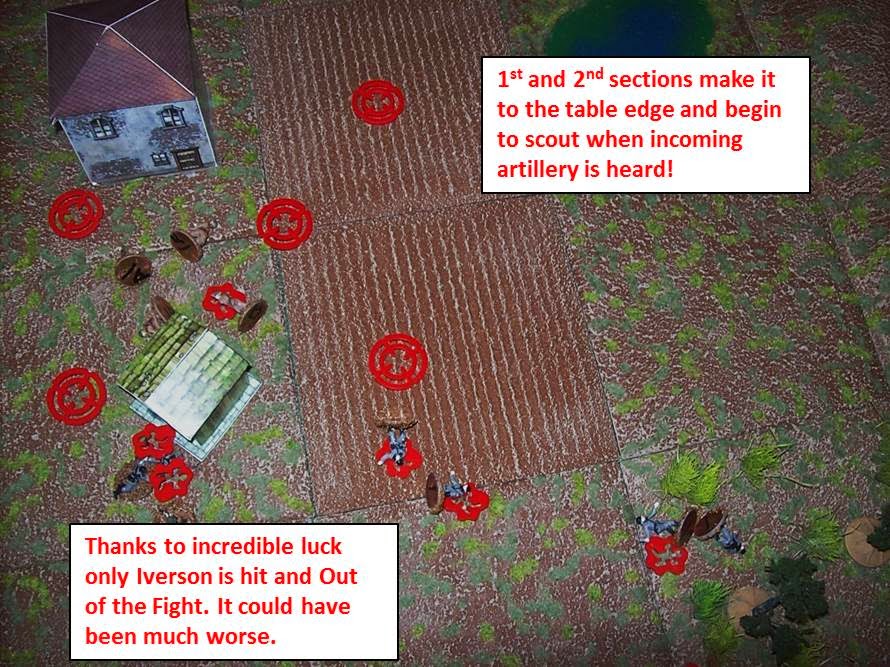 Time to leave as I have fulfilled my objective. After the Mission our Campaign Morale goes up by one (5) while the German Morale (3) and Investment Levels (2) go down one. I receive two Replacements, a Rep 3 and Rep 4. Davis, Barnes and me improve by 1 Rep. That makes me Rep 6, at this moment. As the artillery strike proved, things can  change very fast. 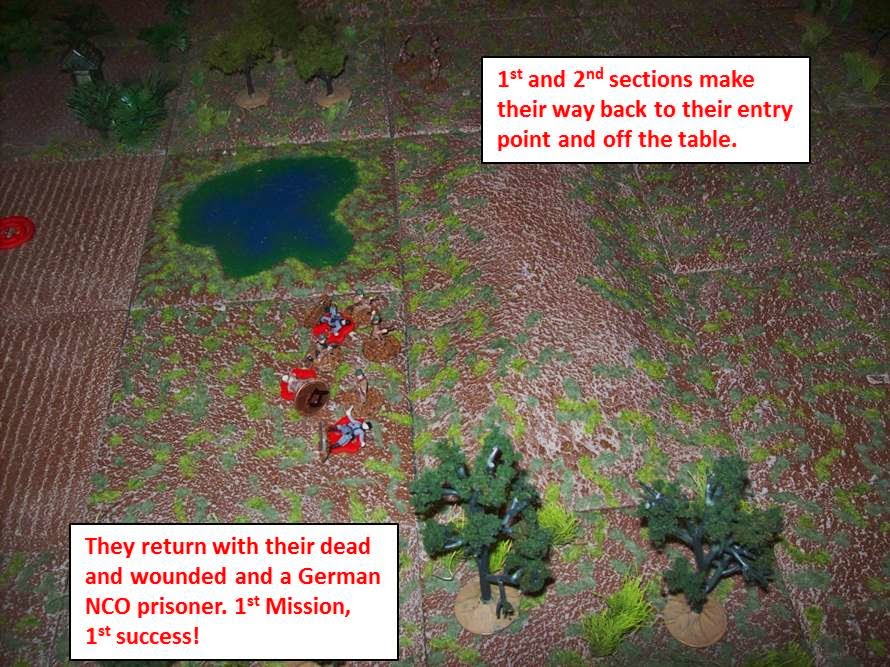 I decide my next Mission will be from the Chocolate and Cigarettes section. I decide to go back and see what was in those buildings!
Posted by Ed the THW Guy at 19:10
Email ThisBlogThis!Share to TwitterShare to FacebookShare to Pinterest
Labels: AARs, NUTS, NUTS Final Version, Two Hour Wargames