In Chocolate and Cigarettes we bring elements of Role-Playing Games into NUTS! – Final Version.  By adding these easy to use rules your characters take on a more personal feel as well as opening the door to more non-traditional Missions. Like with the other rules we've presented, feel free to use none, some or all of them. 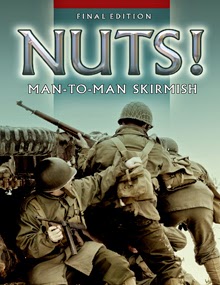 In this section I wanted to personalize WW2. I wanted to encourage players to play smaller games with three to five figures with a variety of “odd” Missions. Here are some examples:
·        Scouting out an area and finding what appears to be an abandoned house.
·        Meeting civilians and asking them for information.
·        Helping civilians or your force to find someone that is lost.
·        Finding a civilian to act as a translator.
·        Racing a small enemy patrol to a local wine cellar.
·        Escorting civilians or wounded soldiers to safety.
·        Slipping past enemy lines to capture an enemy soldier and bring him back for questioning.
With a smaller number of figures there is a greater opportunity to “flesh them out” and make the game more personal. That’s where this section comes in.