First I clear off space to play.  I usually play on a folding card table there's ample room to play. I pull out a deck of playing cards, Haldor's character sheet (a regular sheet of paper with the important stuff written down) three figures to represent the adventurers, pen and the rules. I draw two cards for each point of Enemy Activity Level (6) and place it off to the side away from the rest of the deck. 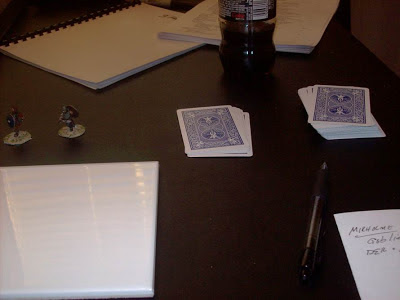 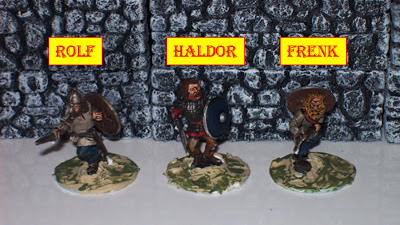 Just to recap, all I know about the dungeon is that the Big Bad is a Goblin, the EAL a 3 for average activity, and it's small, only six cards to start. But all this can change pretty fast. One thing I like about these dungeon diving rules is you have limited knowledge of what to expect. Just rumors...

"Aye laddie, there be  Goblins down in that wee hole in the ground out behind Mac Gregor's fields."

********************************
Haldor and Rolf pushed back the brush and saw it. The rumors were true, there was a dungeon in this area and they had found it.
"Now let's see if there's Goblins about," Frenk said.
Rolf laughed, "And what do ye expect to do with one if you meet it?".
"You'll see old man," Frenk replied. Being the one with the least experience Frenk had much to prove. Haldor just shook his head and wondered if he was that brash back when he was young.
Haldor smelled and listened as they stepped inside.
"I feel this dungeon is larger than we were led to believe." 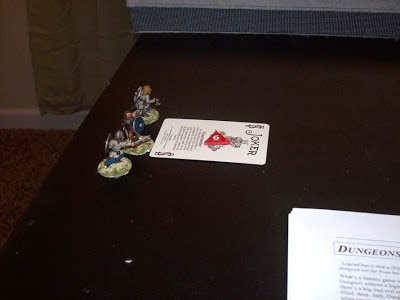 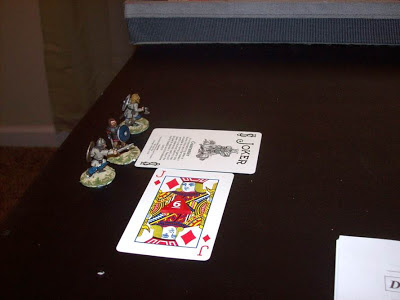 *******************************
The next card drawn as a Face Card. This meant the dungeon would dip down a level and also that the dungeon deck would be replenished to twice the current ER.
A note about Dungeon Tiles or similar devices. Dungeon tiles are usually square pieces of cardboard representing dungeon floors. They can have hallways, passages, walls, etc and are very cool. If you want yo can use these with the dungeon diving rules. As you draw a card just lay down an appropriate tile. Just keep in mind that in WHL the layout of the dudgeon isn't important. It doesn't matter if the dungeon turns to the left or right are branches off. We are only concerned with changes in level.
So bottom line, if you have dungeon tiles use them, if not, all you need is one tile or area to use when yu run into enemies.
*********************************************
The three adventures continued in silence."Look out!" Haldor yelled. A crossbow bolt whizzed across the passage and embedded itself two inches into the opposite wall, head high. Waiting to see if there was more to follow they readied themselves. But there was nothing but silence. 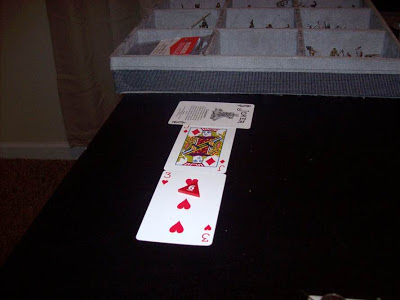 The passage went farther and farther away until they saw a dimly lit area. Then it was upon them with a shout! 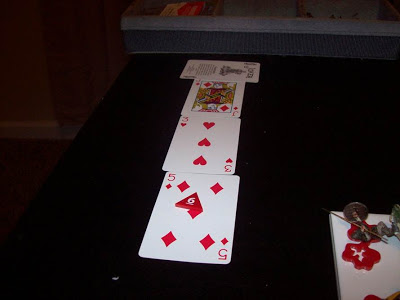 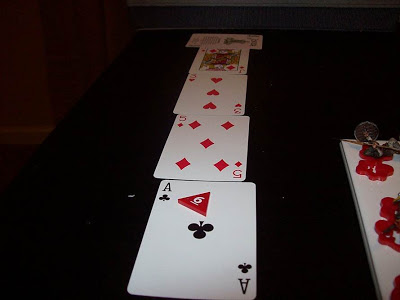 *****************************************
The next card was noting but the second was a Black Ace. In this case it meant the Big Bad. Now I rolled for the number in the Big Bad's party and luckily for the adventurers he was alone!
Figures were now transferred to the table. I use a 6x8 ceramic tile but could use anything or even just a space on the table. If using Dungeon Tiles I'd use a room. The figures are set up at opposite ends of the tile and In Sights are taken. The Big Bad, a Black Moon Goblin goes first.
He decides to charge Frenk and the Charge into Melee Test is taken. Frenk scores more successes and he charges! This is a new result in WHL where the target if the charge can charge instead.
The two melee and the outcome is a result of Evenly Matched.
Haldor now acts and charges, he wins and beats the Goblin back 2" and another round of melee is fought between the two. This is also different in that there if a "6" is rolled for damage when winning a melee the loser falls back 2" and an other melee round is fought.
Haldor attacks again and the Goblin goes down, Out of the Fight. 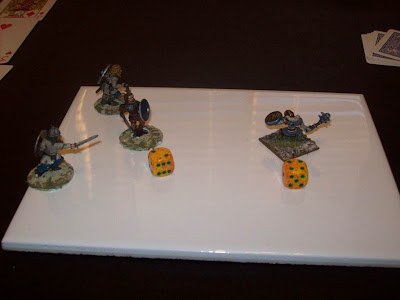 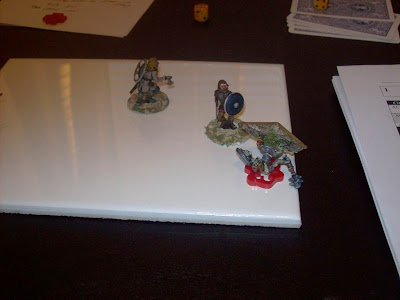 
Although the adventurers had run into the Big Bad they had not reached the end of the dungeon. There were still at least four cards to flip. Well they didn't come here just to kill the Big Bad, they came here for treasure. So it was time to continue the game.
But I have to go so will leave it set up and get back to it later today.